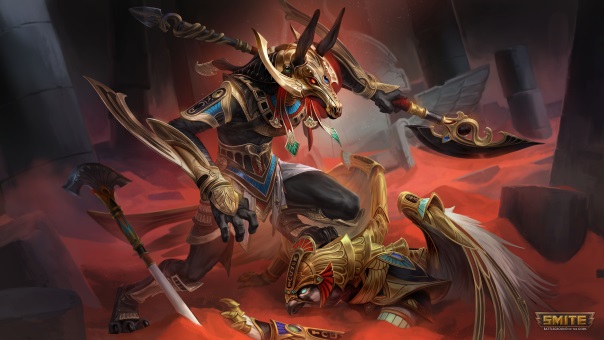 Special Thanks to Trunath at Esports Talk for the Set footage.  We’re also giving some skins away below!

Set is one of my favorite gods in the Egyptian pantheon, so I was very curious to get my hands on him in SMITE. The question of is “Is Set awful or is he OP” is one that I’ve been seeing a lot of. There are definitely some very strong opinions one way or another. I don’t think Set is terrible at all. There’s a fair amount of balance in his kit. He’s got incredible damage, but he has an equally high skill ceiling. You can’t just autolock him, mash out a move combo and win. It’s not going to happen without a lot of experience as a jungler/assassin. His moveset is unique among his fellow hyper carries, and there’s a whole lot going on. Again, thanks to Trunath for the solid footage. None of mine was worth sharing.

In Set’s eyes, the rule of Osiris was tyrannical, and was a disease, slowly killing the land of the Nile. To save the land, he would do what no other would, would pay the ultimate price – blood. So he would trust only himself, slay the King, and usurp the throne. As the son of Osiris, Horus, was unworthy in his eyes, it would be up to him to take command. He would be that murderer, and rely only on himself, creating his army of sand clones. Set is the deliverer of peace and a savior, at least, in his eyes. He is the god of violence, chaos, disorder, and storms, so this is a very interesting story being woven.

Set belongs in the solo lane instead of the jungle, in my estimation. Now, I’m sure his 1 will give him decent jungle camp clear, plus his clones, but the clone damage is lacking. I’ve seen people do incredible things with the 2-1 clone snipe, but it can be lackluster. His kit that will allow him to go in, slap the stuffing out of someone, and dart to a clone to safety. One of the things a jungler definitely needs is some hard CC to lock someone down and get a kill, and it couldn’t hurt to have a very good dash/leap. He does have his teleport to one of his clones, but if you don’t have one placed/can’t get one placed in time, you won’t have any way in/out, so you really have to plan ahead with Set. He has a blind and a slow, but no hard root/snare/stun. Smite Wiki gives him an “Average” difficulty, but I don’t really agree with that. I’ll get into those thoughts later. Let’s look at what he can do!

There are a lot of junglers that are incredibly easy to play. You get out there, dash to your target, and you make them bleed. Set is a little more cerebral than that. He has high damage at all points of the game, but it’s not always easy to make sure you get the damage and get out safely. Something that makes him viable his ability to show up in a lane, burst someone to the point where they back off/recall, then go back to farming/counter-jungling. Proper mastery of the 2-1 combo can blitz a Mage to pieces. You have plenty of ways to build him and approach how he plays, but you really have to be thinking ahead. One of the other things that are kind of weak on him is the heal that comes with his ultimate. I never even notice when it’s happening, and I frankly didn’t even know he had a heal until I started writing the review. That’s how little of an impact it made on any fight I was a part of. One potential solution is should be a flat percentage heal. The current numbers just don’t aren’t useful.

While Set can blow people up with impunity, it comes with a pretty great cost – he has all the defense of wet toast. If Set reminded me of any god, it would be Kali – she can dive into a group of people and burst them too, but the difference is that she can escape for free because her ultimate won’t let her drop below 1 hp, and she can reset her HP to full. Kali can blow up a 1v5 and make it look so easy. Set on the other hand, if he goes in too deep alone, it’s very likely he’s going to get annihilated. So Set always has to be on the move, considering what he’s going to do and where he’s going to go. You can drop clones pretty quick, but you really have to keep one on hand at all times. If you’re caught out, you can dump a clone over a wall, and teleport out. This is also providing you didn’t use your Sandstorm for damage/to try and get a pick. I like Set, but you really must be conservative with his skills, except his 1. His 2 and 1 have low cooldowns, so it’s easy enough to utilize them for damage.

Attack Speed items on Set are basically worthless. As he can hit attack speed cap just by hitting things, you don’t need to waste your time on them. If items you want conveniently have Attack Speed on them, that’s fine – like The Crusher for example. The best way to build Set is Critical Strike/Penetration, but if you’re good with your abilities, Ability Builds are also sound. But I want something reliable, and something that is in line with my “Hitting people very quickly and melting their faces with sand and violence”. There are several items that have Attack Speed on them, that just happen to help Set, like Hastened Katana. Hastened Katana lets gods who hit a target with a melee hit become immune to the Basic Attack Movement Penalty. This could also be fun with Frostbound, to snare people with a hit, and keep them right where you want them. I will say that Set’s absolutely amazing when you hit Attack Speed Cap, and start hitting melee shots for 600-800. He can truly melt people once he comes online, and while his damage is good at all stages of the game, his survivability is very suspect. I don’t think Bloodforge is enough to keep him alive though. Though I did say that Attack Speed isn’t really viable, that’s not 100% true. I like having those hybrid items that have at least “some” Attack Speed on them because you aren’t always going to ramp your Attack Speed nice and quick. That little bit of a boost helps sometimes.

Honestly, I don’t dislike Set. As someone who does not play a lot of assassins, he did feel incredibly difficult to play, and most of the assassin mains I talked to prefer other gods to Set. While he can do lots of damage, he doesn’t have a lot in his kit to make him feel safe and reliable. I like the kit as a whole, but I have to wonder if when Set and Horus were designed if the “class archetypes” were not a consideration. Perhaps the concept of “classes” is outdated, and this is a new, experimental design type for the Titan Forge Devs. It’s an interesting move if that’s the case. It works because while he’s an “assassin” in terms of in-game classification, he felt more like a solo laner for my own personal experience. So where he goes is up to how the player approaches him and his kit, which is pretty fascinating.

If Set were to be truly an assassin though, he is missing is a tiny bit of protection. He just gets shredded so terribly easily. Another thing brought up is that he lacks the mobility of the other assassins. Nemesis can double-dash, Fenrir sort of has two jumps, Kali has a stun and a jump. He is perhaps the least mobile of the assassins, so this is an area he could see some adjustment in. I hate to say it, but perhaps it’s time to look at what League of Legends did in the reclassification of roles/intentions. Horus and Set both feel like they could fit into a few spots nicely, all depending on the player. Set certainly brings a lot to the table, but only if you’ve got the skill, and the chutzpah. He’s the epitome of high-risk, high-reward.