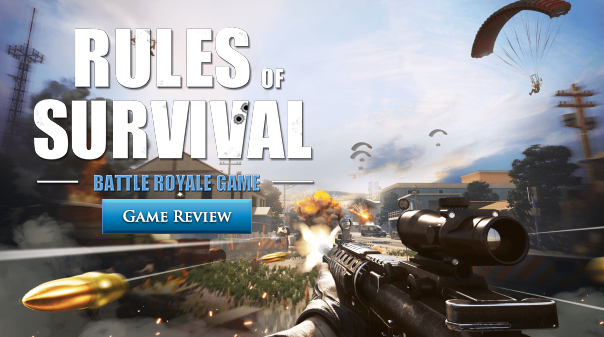 I started this review thinking that I’d mostly be dumping on Rules of Survival, since I’ve already dismissed the game as another mobile PUBG clone. This isn’t really accurate since NetEase Games released RoS a few months earlier than the official PUBG Mobile game. I was pleasantly surprised that the game disproved my prejudice against RoS and in some cases, I even considered RoS superior to PUBG Mobile (reviewed here).

RoS’ core gameplay follows the typical Battle Royale format that PUBG was known for. You drop from a plane, run around like a headless chicken, and pick up weapons, ammo, and equipment from the various buildings, shooting anyone who you aren’t partnered with to be the last man, duo, or squad standing.

The gameplay mechanics of the mobile version of RoS pretty much outshine PUBG Mobile’s. The most obvious difference is between the aim tracking of the two titles. RoS mobile’s aim tracking is smoother than PUBG Mobile’s. I find it easier to aim with scopes in RoS and the control layout is better designed. You can basically do a lot more actions with the least amount of screen taps in RoS Mobile. The game’s pick-up system in RoS is more refined than PUBG mobile’s and I’ve had less problems with the game suddenly picking things up on default settings.

Of course, when we talk about the PC version of the two games, without a shadow of a doubt, PUBG is infinitely better. Rules of Survival’s PC port lacks the sophistication that PUBG’s PC has. Considering that PUBG is a paid game whereas RoS is a F2P title, there is no contest when it comes to the overall game quality PUBG PC has compared to RoS PC.

For those who’d like to play in-between the PC and Mobile ports of Rules of Survival, NetEase Games had the presence of mind to create two separate servers for the PC and mobile ports. Since this is a shooter game, there is a huge difference between the experience and skill for those who will be playing the PC and Mobile versions. Even with the aim assist the game has for the mobile, mobile players would have a difficult time against PC players if there was cross-platform play involved.

Since Rules of Survival uses the F2P method as its business model, I came in thinking that the game would be a money sink for cosmetics (not just for weapons but also for clothes), and I wasn’t disappointed.

True to form, RoS is riddled with promos and bundles that you can purchase using money to make your characters look really good or look like a gaudy piece of meat in-game. The choices you have right now are pretty limited, and being a guy who doesn’t really want to spend money to make me look like a rejected Backstreet Boy, I pretty much ignored the options available and focused on playing the game. However, with what I’ve seen in-game, the weapon skin options are what you’d expect from a F2P developed game. The rarer and more expensive skins have auras depending on the skin general color, which if you actually use in-game would do more harm than good because you’ll be sticking out like a sore thumb. There are some low-key skins available, if you want something different without making yourself a moving target.

I did appreciate though that NetEase Games allows you to switch between the male and female character classes in-game. Though I know indirectly that this was clearly made to “encourage” players to spend more money to buy the cosmetic stuff, I like that you have at least options for your in-game avatar.

Aside from clothes and weapon skins, the game also allows you to also purchase vehicle skins. However, you don’t have any choices for the skins right now so it’s pretty pointless.

Conclusion: Great (4/5)
Provides a decent BR experience for the mobile, definitely better than PUBG Mobile. PC version lacks the opph you expect from the PC version and is beneath PUBG PC.

As I kept on playing RoS to get the feel of the game, I could clearly see the difference between titles that were made for mobile. In PUBG Mobile, Tencent Games were forced to compress the whole BR experience PUBG PC had to the mobile platform, and the game’s quality suffered for it. Meanwhile, Rules of Survival went for the opposite route, where they started with the mobile version first and built on it for the PC version. The quality between the two versions is distinct, with the RoS mobile experience ending up being the superior version of the BR genre.

Even with the similarities and the accusation of copyright infringement by PUBG against RoS, there is no denying the better gameplay that NetEase brought in with Rules of Survival, at least for the mobile version of the game. RoS feels more like a smoother, better-designed mobile shooter compared to the clunkier, more awkwardly controlled PUBG Mobile game.

If you’re looking to get into the BR experience for your mobile phone, Rules of Survival is a solid game to download. It’s a sleeker version of PUBG Mobile and provides a smoother BR experience for phones. Of course, the quality of experience varies on the phone version that you’re using, and the review for my mobile version was done with the Xperia XA1 Ultra, so the experience may change if you’re using a different phone.

Meanwhile, the PC version of RoS is pretty much just a mobile port, which of course doesn’t say much when it comes to the quality it brings to the PC version. I found the RoS PC version lacking and would have to say that PUBG PC is definitely better than RoS PC.