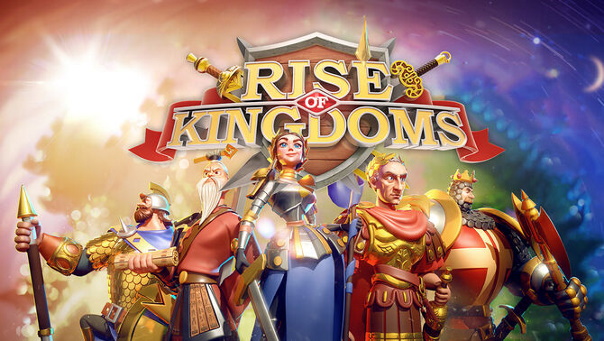 The “City Building/RTS Mobile Game” genre is a deep pool, and it’s hard to make a splash in it. What’s worse, many of these games aim at taking advantage of high-spending players, aka “whales”. Those who spend the most money wind up having the most powerful kingdom. There’s nothing that can beat them, other than leaving their territory or spend money. And on that note, we take a look at Rise of Kingdoms, a civilization-building game. You create a civilization from nothing and attempt to build a great empire. Rome wasn’t built in a day they say, and your city won’t be either. Like all mobile city builders, this is a Waiting Simulator.

When you begin, you pick one of many civilizations to represent you. China, Spain, Ottoman, Arabian, Roman, Germans, Britain, and many more are available. Like you would find in Civilization, each faction has a benefit and a special unit. They also have their own architectural style. You’ll have an advisor that guides you through the beginning phases of the game, teaching you quite a bit about gameplay. It’s tedious if you’ve ever played one of these games before. It will take you through the process of acquiring a general, training some troops, and so on. I will give it that: the game is very good about teaching you these basics. You have a decent amount of space in which to build, and you can move buildings around. If you decide you don’t like the feng shui of your city, you can change it.

This tutorial process takes quite a while, but it’s worth it if you’re new. The downside is, when you make a new character, you still have to do all this again. You also cannot switch characters during a tutorial phase. If you’re like me, writing about the game and needing info from the tutorial, you are stuck doing a great deal of it over. Please, make a “choose a Kingdom” option for the main screen, instead of loading into the game.

The gameplay loop is pretty simple. This tutorial will give you a (generally) strong general for your military, too. You’ll learn how to scout for barbarians, explore fog-covered parts of your map, build, and upgrade. Combat is important, of course, but the majority of the game is spent waiting on buildings. You have military and civic buildings, as well as cosmetic structures, and you wait on them all. You’ll also wait on researching upgrades. That was the most brutal wait for me.

Wood, Stone, Food, you need mountains of these.

In your corner of the world, you want to have several resource-gathering buildings. Your most important building is the City Hall. To improve it, you’ll have to have to meet certain requirements in the form of leveled-up buildings. This means you’ll need piles of resources and time. The game gives you items to speed up this process, through chest drops and achievements. I had a fair amount of these in the early going, but the more powerful my buildings got, the more time I had to spend. This means those items disappeared at a frightening rate. The solution? Money! Buy more Gold Chests, which have better drops. You do receive one free per day, and through playing you can pick up the keys for the regular Chests. But in a game where the other cities around you are growing, you’re going to likely feel the pressure to spend. I haven’t spent any money, and have played over the last couple of weeks. My average neighbor is at 700,000 power, with thousands of kills. A few of them have even broken into the 1,000,000 power rating.

Upgrading your cities is also how you pick up stronger types of soldiers. The tool-tips even state that stronger units have a higher chance to defeat weaker units. The game does use a rock-paper-scissors system, but you likely will never see it. You can only upgrade two buildings at a time. You’ll need to spend gems or speed-up items to progress faster. Like many games in this genre, Rise of Kingdoms wants you to spend money at every opportunity. Though at first it showers you in helpful items, they will dry up the further into the game you go.

At least the Generals look cool.

Speaking of resources, one of the most important resources are your Generals. You can’t fight barbarians or do battle with other players without an array of Generals. You can gain these in the Chests, but you also pick up Idols through PVE and Chests. These sculptures represent certain Generals. So not only does this game offer lootboxes, and excessive waiting; it also has a piecemeal system! That’s right, you need many of the idols per general. You’ll need more of them to improve that character’s star rating/power. Generals also have three skill trees, designed like the Final Fantasy Sphere Grid. Each commander also has a unique set of four skills, and the commander sculpture can be used to upgrade these skills.

Another way to pick up resources to improve your generals and the city at large is the PVE content. The campaign is a prime example of this. Each mission has three stars to unlock and a first completion reward. These are also a great way to get into the spirit of battle. You’ll be allowed a certain amount of generals to go into battle. You’ll drop onto a battlefield with your army, against the enemy units. You click on your unit, the enemy unit, and hit march. If you tap on your general’s icon, you can see how many troops you have left, and the enemies can be seen on the left side of the screen. This isn’t an incredible way to farm resources, but it does help. It’s also more robust than PVP, even if only. If players had control over their units in PVP battles, that would make it more interesting. With the Alliance system, if you join powerful players, you can get them to help you and make some battles easier.

30 days? THIRTY PISSING DAYS SPEED-UP?! That's the kind of wait I have to look forward to?

The real bread and butter should be the PVP. You can scout potential targets to see what their defenses are like. When I went to attack a player though, my troops marched to the superior-strength city. Seconds later, my army walked back defeated. We managed to kill about 240 of their troops, but at an incredible cost. PVP isn’t about tactics, but raw power. The only time you see actual units clashing is when they’re on the overworld or in PVE scenarios. So far, I’ve yet to see a “safe” location, since every area has plenty of powerful players. There’s no balance of power since players can PVP against about any player that isn’t under newbie protection (level 8). There’s also a merchant that comes to your town on occasion that allows you to purchase a teleport scroll. While this isn’t a big deal, there are players who use it to teleport closer to weaker players and maul them. It’s something you expect in a game like this, but it’s still disappointing to see.

So the real question is, how is it monetized? You can use gems to immediately complete buildings, troops, and research. The store has a “Supply Depot” that for a set amount of real money will give you daily supplies. This ranges from gems, wood, stone, and other useful items. This makes certain that players log in every single day to pick up these items. The “Daily Special Offers” is a trio of chests that, while are cheap, have useful items. I don’t like this idea. I appreciate that they’re cheap, and people could get lured into buying these often because “It’s 2.99”. Or “It’s just 99 cents”. That’s a slippery slope, I’m afraid. Then there are the piles of Bundles to buy. The “Growth Fund” tab of the store gives the player Gems for increasing their City Hall, but only when you’re VIP 5 or above. That’s right, it also uses a VIP system!

Mmm. Lootboxes. That's what I want in my games. Oh wait, that's not it at all.

You can earn VIP points by playing the game. You can also spend real money on the VIP points. It’s 200 points to hit level 1, as an example. This will give you +3% production on all resources. You receive some pretty useful buffs in the VIP system, but there are no levels to buy, only the points. VIP points come in bundles that are 1 gem per point (10, 100, 500, 1000, 5000). This system feels convoluted. You do earn gems through the achievement system, but it takes a mighty long time to farm them that way. Those gems, in all likelihood, will go into building and troop speed-ups. Simply playing the game will give you absolute tons of rewards, thankfully.  The monetization for Rise of Kingdoms feels greedy for the sake of greed. The “free gems” from the VIP 5 Growth Fund are great, but many of the options are direct money purchases, not gems. This does not wind up helping you in the real-money store that much. The most important thing you can use gems on is to speed up production to make your force relevant. If you want to dominate your foes, I cannot see a way to do it without spending tons of time or serious cash. You will it to power-up generals faster and speed up building.

At least PVE has small battlefields to enter onto. You can also see Barbarian battles, but city sieges? You just heartlessly flail at their walls.

Rise of Kingdoms has a beautiful, colorful visual style, unique character designs, and a solid premise. There are major, crippling downsides, and it’s all because of the monetization. Most of the bundles and boxes come with gems in addition to everything else they offer. This is great, but you can’t buy those boxes with gems, only real money. Gems are a real-money currency that can’t be used in the store. To the game’s credit, I have absolute mountains of resource items that I can turn in to give me more Wood, Stone, et cetera. It did not take me long to get to buildings that take anywhere from 2 hours to 12 hours to complete. It tries hard to nudge you into spending real money to speed that up.

It’s Whale to Win for sure. If players were put on worlds with players that were more in their range, it might not be so bad. I have yet to be surrounded by players that are not massively powerful. I enjoy the concept of the game because I like strategy games. The only real strategy I found was in the PVE mode, not in the actual PVP. PVP boils down to having more troops, better troops, and a more powerful city. Having the raw power will likely get you victories without fear. It’s a game that I want to like, and want to enjoy, but cannot see myself doing so at this juncture. If you are playing casually you may find yourself enjoying its visual style. I went in seeking Civilization and only found a heartless wasteland. The concepts are fun, but there are definite flaws in the system.