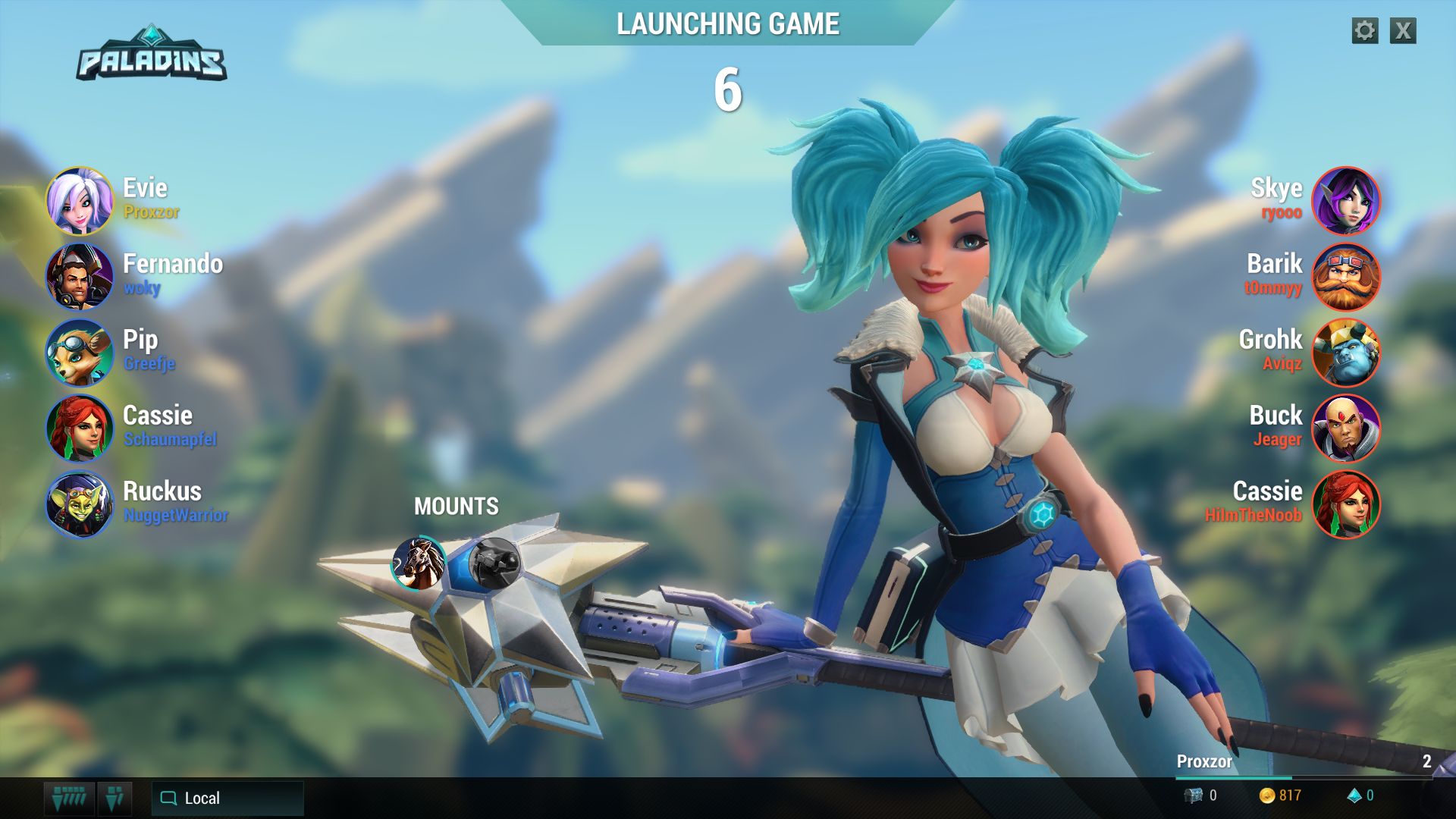 If you haven’t read the preview Ragachak made, I suggest you check out his article first as it offers the overlay of features and functions that I will be going into greater depth on in this follow up article. Paladins is the next evolution of MOBA games; instead of having a top down view and having to use your mouse for the walking, the game transitions into a much smoother and improved version as we know 3D MOBA games of today. Despite not having any creep mechanics, the control point system combined with siege engines goes far to pull MOBA players into the shooter genre.

But first off lets touch on the newest champion introduced after Ragachak’s write-up: Evie. Evie is the winter witch of Paladins, equipped with a staff that fires ice towards its target, she is also capable of making an illusion, teleporting in the form of a blink, and flying clear of danger on her staff like a true witch. But before I tell you more about Evie, let me first explain to you how exactly the champions in Paladins get their powers, besides their spells they also get a bunch of cards that basically empower their current spells. 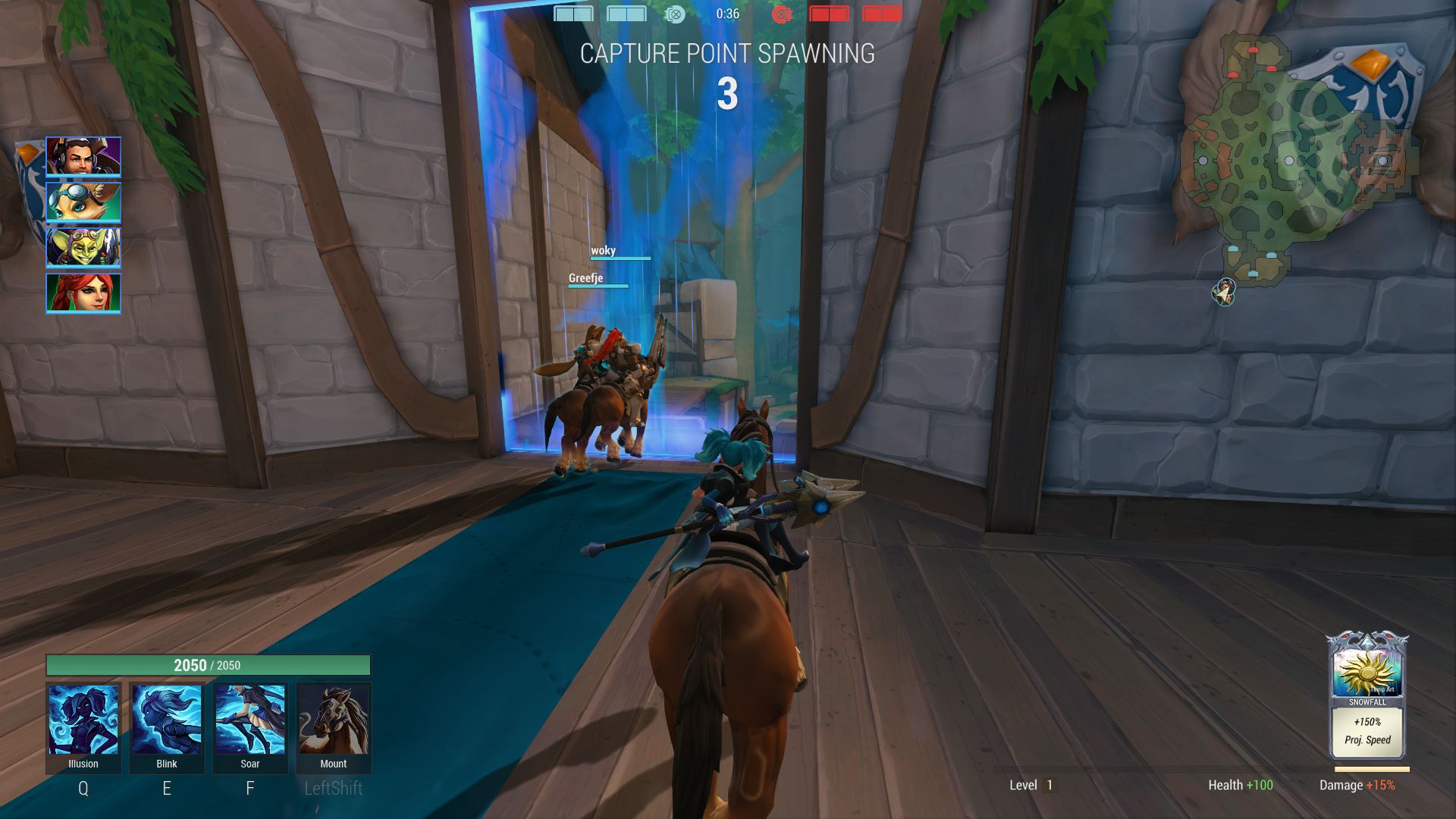 Even if you can fly on your staff, horses are still nice.

The card system in Paladins is really interesting, and grinding these cards is done as easy as playing games. Right from the moment you start playing, you are given a bunch of basic cards to get a feel for the system. When finishing a game you get a treasure, and in these treasures you will find a lot of different cards for random champions. Usually these cards are better than the ones you were given at the start, though even repeat cards have their use. The best CCG comparison to the system is Hearthstone, each card will empower your champion in a way, but since each game is different and you will be fighting against different champions and people, sometimes the cards you have do not really work out in your favor. Each card has a different type of rank, and this rank basically tells you in what phase of the game you get to unlock these cards to choose from.

The color goes from silver to green to blue to purple and the last is gold. As you can imagine, the golden cards are the best and basically empower your characters in such a way that it can enforce a quick victory or give a losing team that holds on a chance to climb back into the action. For each champion you can select three cards for each rank to make your deck. Basically an experienced player will have some options to counterplay foes that newbies will lack. Though recent changes at least balanced out pure power cards from impacting the start of the game, so at least in the first few firefighters, players will be on an equal playing field. 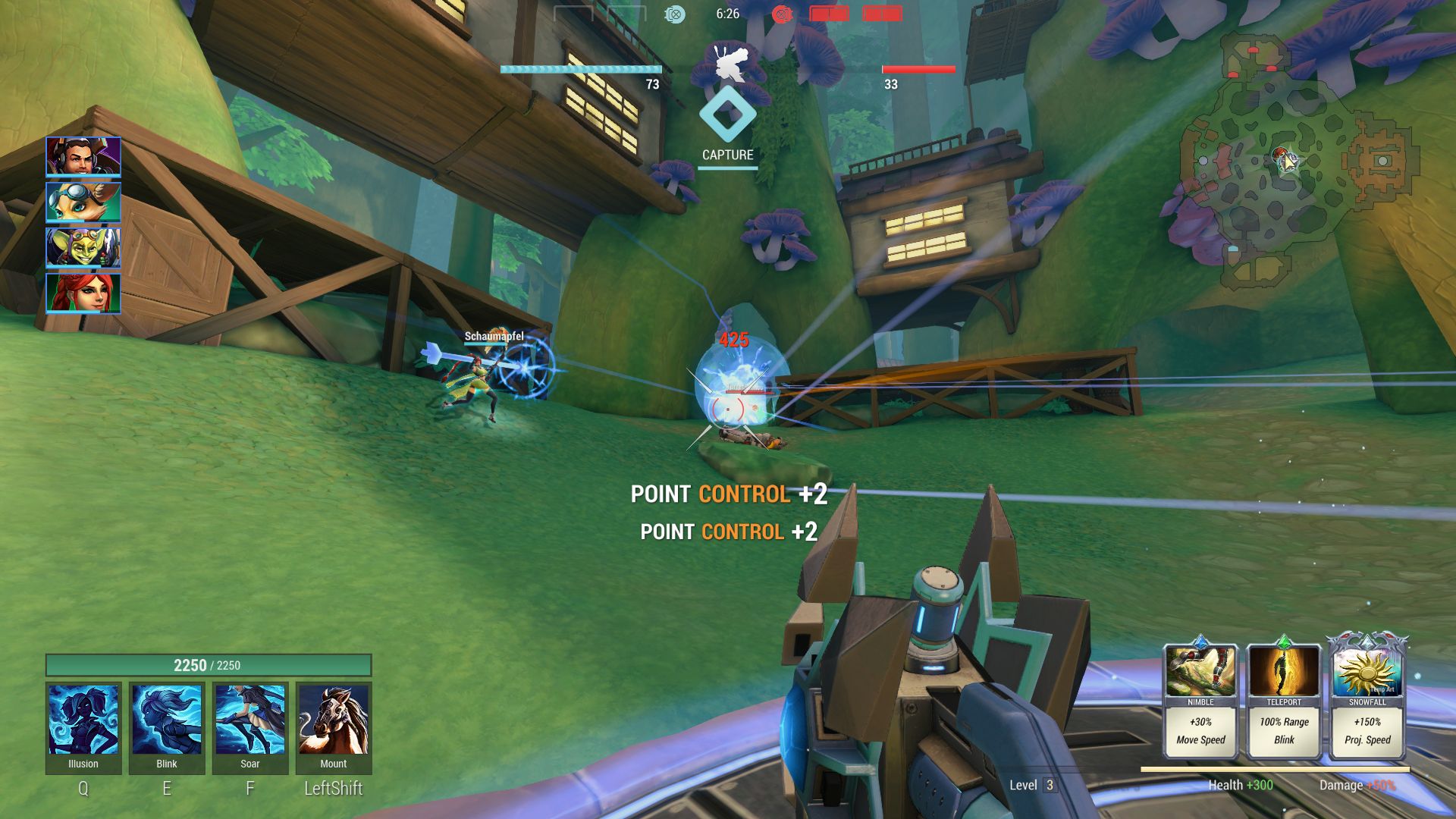 The new deck building modes have taken some RNG out of gameplay.

But enough on cards. Let’s use Evie again to compare Paladins to other arena shooters. When I was playing Evie I noticed that despite her appearance, she fills a more traditional sniper role in a shooter setting. Now granted every class has ranged damage through their gun style auto attacks. But Evie’s abilities pack massive range that sets her apart as a sniper. Further emphasizing this sniper playstyle, her auto attacks have a delay, making each attack more meaningful and forcing you to lead foes like any true sniper. They do however have a small explosion so you still do damage if you just slightly miss your target, making her slightly more forgiving.

After collecting a few cards for Evie, I mitigated her weaknesses by making her auto attacks go slightly faster so its easier to hit. This was a tough choice though as the opportunity cost was losing an extra powered blink that was ideal for pursuing a dying foe from up close. Clearly the former is more novice friendly, but the later is used properly is invaluable; neither choice is wrong! Evie is one of the first characters introduced to the game with a rather brutal skill curve that allows veteran players to snowball out of control, while being a total drag when a novice picks her up, or when your cards just aren’t coming up right. 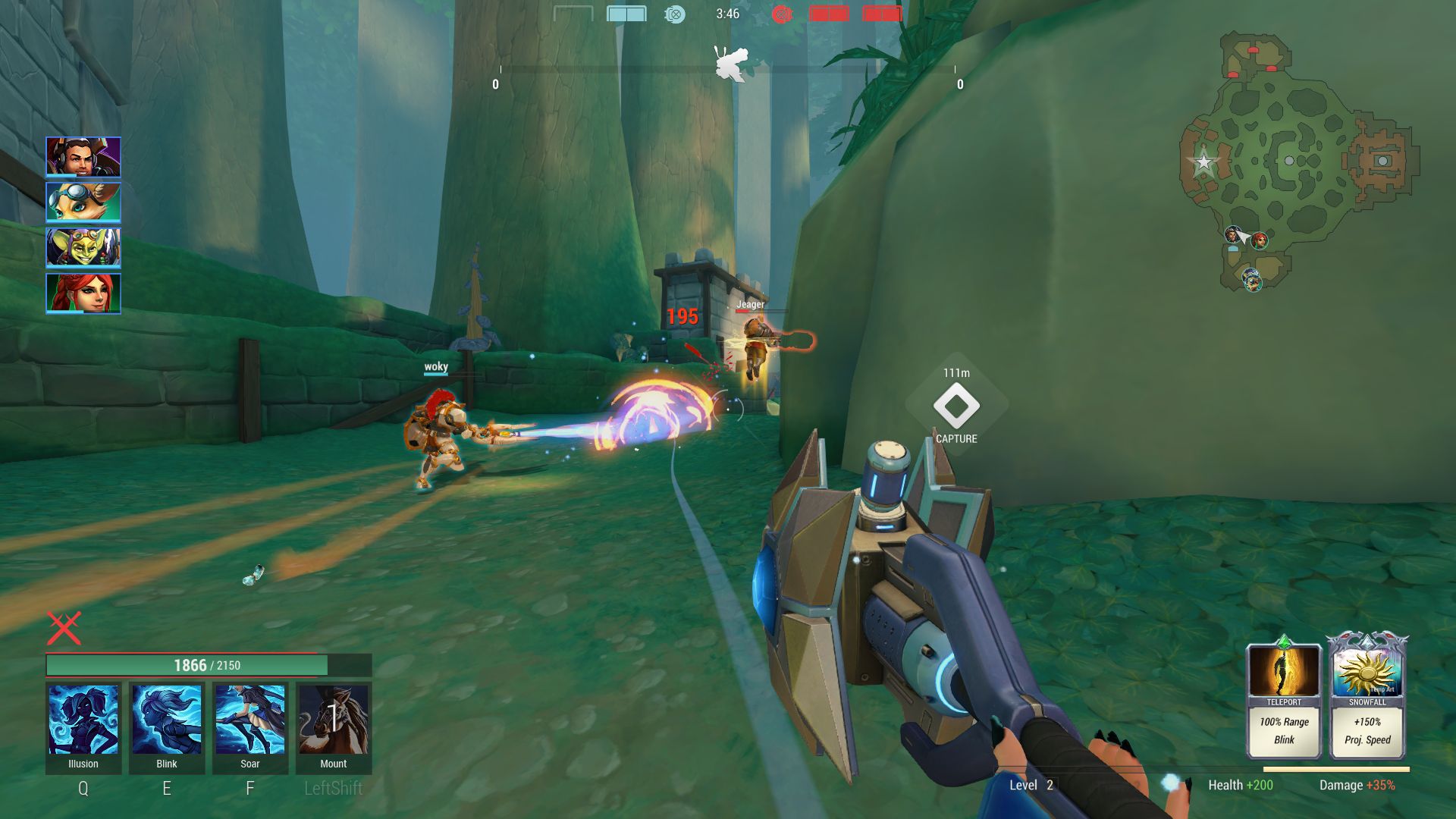 When the enemy is on the run, Evie is amazing.

Even though there are several maps in Paladins right now, somehow they’ve made it so that you queue into the same map almost always. For the most part I imagine this is showing their focus on character balance before worrying about how competitive and fair their various maps are. I have played them all, and on some maps I have felt that the maps needed a little bit more work, you see the current and only game mode in Paladins is called Siege. In Siege you have three capture points on the map, that both teams have to fight for. When a team has taken over a capture point for a hundred percent, they gain the siege, that well… sieges the enemy base. And on some maps these capture points were a bit too favored for one side of the map, which does not combine well considering how snowbally the game currently is. The siege phase of the game is very straight forward: your siege will attack the first layer of the wall, and once it breaks through it will do the same to the second layer. When both layers have been destroyed, it will attack the core of the base to end the game. 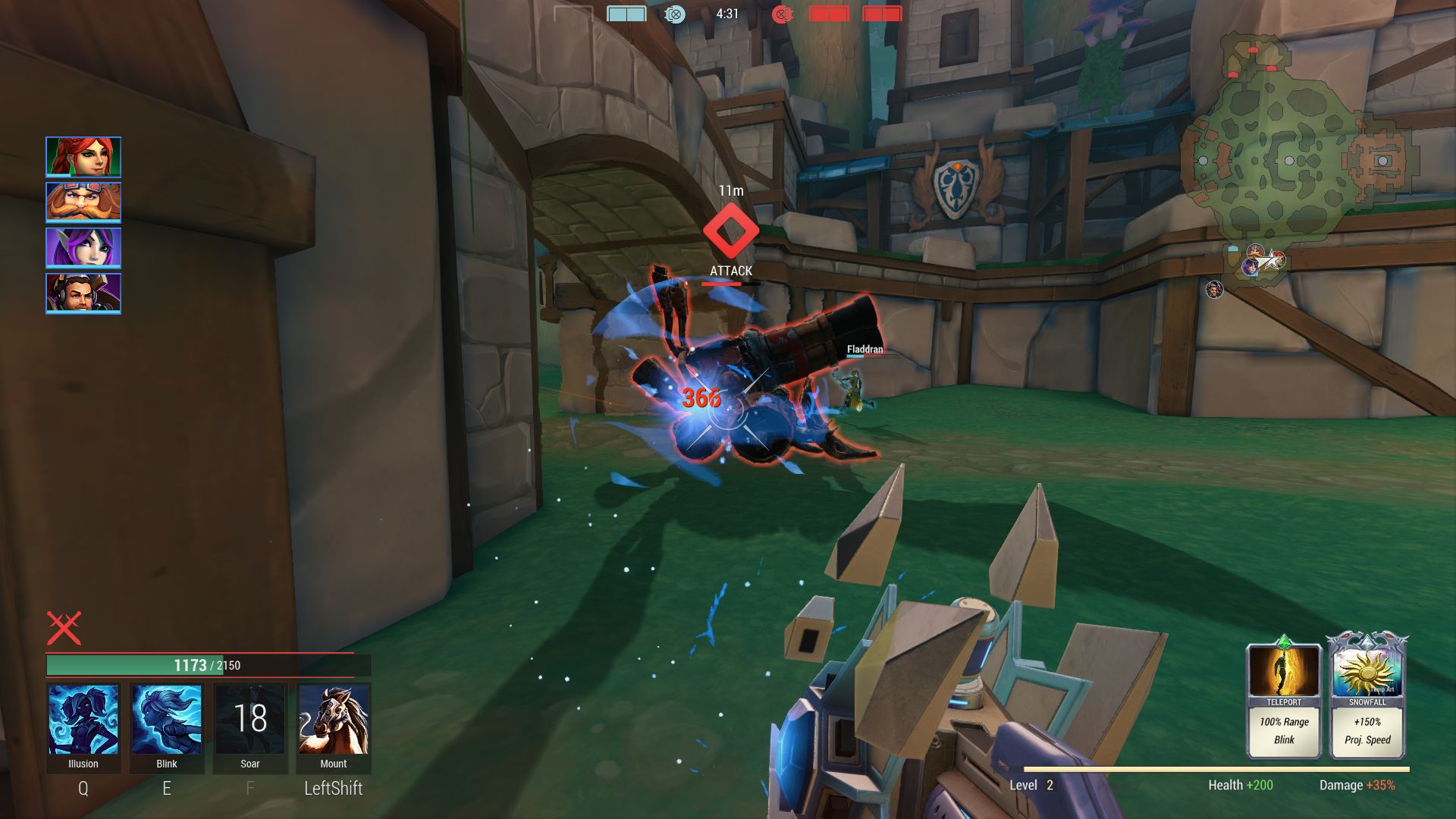 Siege engines still feel a bit too tanky for a losing team to properly counter.

The game in its current state is extremely fun to play, but you will still notice a few bugs here and there and the balance still has a way to go. Sometimes with Evie for example, you will try to fly away and get stuck in the side of a small hill since there still is a bit of clipping. Matchmaking is still lacking, likely both technically as well as due to the small starting playerbase. Don’t expect battles to last longer than 10 minutes as one side tends to steamroll the other.

Even though I’ve laid out the clear differences in mechanics, its impossible to talk about Paladins without comparing it to Overwatch. Both are trying to attract the same audience, and are encompassed by the outer edge definition of being a MOBA. My recommendation is that traditional shooter players that fawned over Team Fortress 2 are going to stay on team Overwatch due to its fast nature and gameplay rewarding twitch skills and a steady hand. Conversely Paladins will suck in the MOBA players as it awards having a balanced awareness of skills, counterplay, and map awareness, while offering more AoE style attacks to be more forgiving on the twitch skill side. Individual skill seems to win out in Overwatch while team coordination seizes the day in Paladins. Overwatch gameplay gets a bit stale with your defined rolls at the start of the match, while Paladins constantly switches you up from offense to defense on the fly, keeping your heart racing. While it’s too soon to say if one is done better than the other, both feel like intense competitors that should be watched closely in 2016.