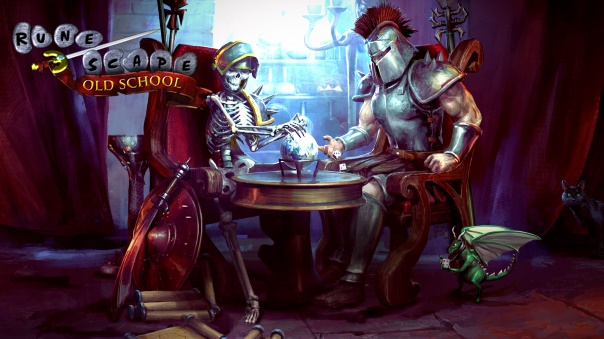 When most of my friends were diving into Runescape, I was still gaining incredible amounts of enjoyment from MUDs (Multi-User Dungeons), and still do. I missed out on Runescape when what’s now known as OldSchool Runescape was in its heyday. But the OldSchool version of the game still has a very rabid, eager following, enough that the developers over at Jagex recreated it, while still updating and working on the current version of RuneScape. So when I was given access to OldSchool Runescape Mobile a bit before launch (though Members already had access), I was genuinely curious. I went and installed it on my PC too, to see how, if any way, it’s different in function or form from the mobile version of the game. It wouldn’t be fair to actively review a game that uses a codebase from 2007 and was re-released on mobile in 2018. So instead, I want to see how it feels to someone who is sincerely new to the game.

It might look retro, but that's en vogue right now.

Runescape launched in January 2001, and over time, was re-released as Runescape 2, with a newer code. Runescape Classic also came to life a little later on, but there were issues. Runescape Classic was rife with cheating and botting, as this particular code was very easy to abuse. This is one of the major reasons that this iteration of the game died. Then along came Oldschool Runescape, the August 2007 backup of the client. It was Members-only until 2015, and now we’re here in 2018, with the classic MMO available on mobile devices. After the release of the mobile version, Jagex reported they broke their record of 100,000 concurrent players, which tells me that there is definitely a call for this particular version of Runescape. One of the bonuses is that you can play on your PC, and immediately log out and take the game on the go with you. It’s decent on your battery, being an older game, but will definitely drain even the best phone after a few hours of wandering and killing. I wouldn’t go on epic quests on my phone, but grinding and looting bodies for money? Absolutely.

While I really appreciate the notion of playing on my phone, there are aspects of the game that felt clunky and uncomfortable on my phone. That could simply be due to me being new to the game, but these were comparatively easier to do on my PC. One of the most frustrating things to me was trying to enter buildings. I spent so much time trying to enter by tapping on the door before I learned I could just tap on the roof, and more often than not, I’d wind up inside the building. The fact that I didn’t really know where I was going or what I was doing was pretty frustrating. I was able to pick up a quest, but boy am I spoiled by quest markers! With access to websites, I was able to figure out where to go, and since I played at home, I definitely used my monitor for that. No reason to punish myself and leave the game to browse my phone’s browser. Communication is awkward too, but that’s a fact in basically every mobile game I’ve ever played. It’s easier to type on a keyboard than it is to type on a phone. I was, however, grateful that I could hide the chat box, because I would try to move, only to open up the keyboard to type messages instead.

All the flavor of the original, but now you can farm and craft on the go!

One thing I take for granted on the PC version is hovering and right-clicking. When you hover over something on PC, you don’t have to push anything; it just happens. On the phone version, you press for a moment, and then move your finger, and tap again to select what you intended to do. This is, of course, going to happen on a phone, since you have one button to push, and that’s your finger. This is less tedious on the PC version, but you know what’s amazing on the phone? The camera. Being able to rotate and move around with the swipe of a finger(s) is incredible, and makes it worth playing on the phone just for that. I also find it’s easier to see what NPCs say to me on the mobile version. On the PC, NPCs default to the bottom left of the screen, and dialogue on the mobile version is upper left, much easier to see. That might be a weird distinction, but I’m used to pop-ups being at the top of the screen, not the bottom.

I will say that the tutorial for OSRS is very helpful, despite my inability to find quests in the real game. It took me step-by-step through the majority of important things I needed to know: combat, crafting (cooking), fishing, walking around, mining, the important stuff. It’s helpful for someone who is new, but I did again, have a hard time finding out what I needed to do beyond that. It’s a pretty open world, and I can see it being relaxing, but I don’t know if I’d recommend someone who is new to the game starting on the mobile version. I’d suggest trying it on PC first and download the mobile version as a companion, for when you want to play away from your desk. That’s not to say that OldSchool Runescape Mobile is bad: far from it. It’s a true, faithful recreation of the PC version – same graphics, same game, same people.

Who Is This For? Everyone, But Current Fans May Enjoy It More

OldSchool Runescape doesn't change unless the fans adamantly want it to. I appreciate that.

Sure, current fans of OldSchool RuneScape will get more out of the mobile version, since they probably have established characters, and many have memberships, which do give them access to more content than a free user. But there is such a giant market for mobile gaming right now, that I think it could definitely turn someone on to trying OldSchool Runescape on PC and moving back and forth between the two. There are things I like both versions for, but I think the move to mobile is a great idea. Runescape was originally designed that virtually any PC could run it, and with as powerful as mobile phones and tablets are, this is a sound move. It also doesn’t use a ton of data. From what I’ve read, it uses about 500kb-2mb of data per hour, which isn’t bad at all. On top of that, it’s so easy to get unlimited data/WiFi access. I do think that 11 dollars a month is a little steep for a membership in a 17-year-old game that seldom sees updates, but it does at least give you access to both games (Runescape/OldSchool Runescape). I have enjoyed my time with the game and will probably continue to play around and explore this world that, despite being incredibly old, is still new to me.

Give it a try – download today for iOS and Android.