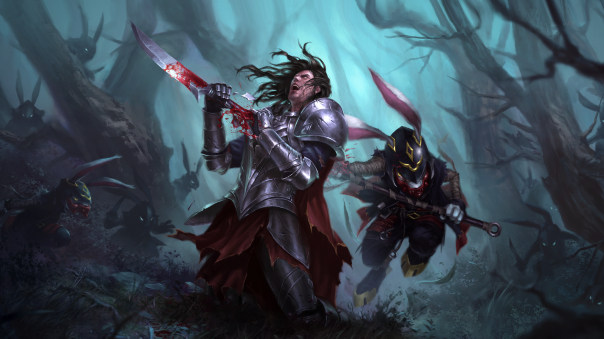 Gameforge and HEX Entertainment have released the fifth set for the digital trading card game HEX: Shards of Fate. “Herofall” contains 275 additional cards, including 18 legendaries, and adds new mechanics which embellish and expand on the game’s existing tactical depth.

Powerful Abilities and Collector’s Paradise
Among the 275 new cards, players have the opportunity to collect 77 rares and 18 legendaries, along with 26 cards featuring alternate art variants. In addition to the cards themselves, some new keywords join the fray. “Assault” troops strengthen cards a player still has in their hand, whilst “Scrounge” shows its strength, once the card is brought into play, by sacrificing a card from the crypt in order to unlock an additional bonus.

Other innovations add extra flavor to the ongoing conflict between the Ardent and the Underworld. Exclusive to the Ardent, “Valor” strengthens the player’s own troops, which benefit from special effects. The Underworld, on the other hand, have turned to employing small, expendable troops called “Dreadlings”. These must attack on the same turn they are summoned, but are only available for that single turn.

New Champions Arise
As if the addition of new equipment, mercenaries, card sleeves, PvE cards and even 20 new socketing gems wasn’t enough, the new update comes with 20 new champions in tow, each equipped with a unique ability. Bloodspinner Zorath of the Underworld and Two Tomahawks of the Ardent, for example, possess the ability to create a banner which either spawns Dreadlings or summons Valor cards to the player’s hand.