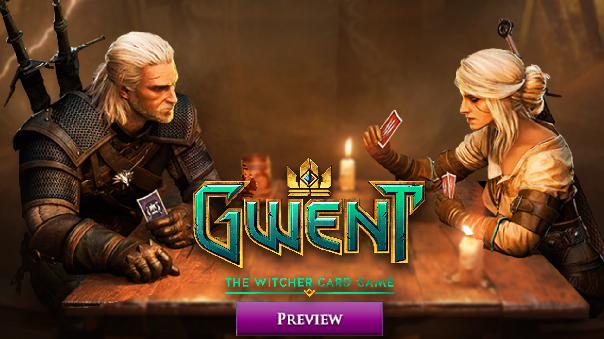 It’s a tough world for up-and-coming online collectible card games these days, however, a new challenger rises to break the mold and crown itself king within the genre.

From the humble beginnings of a side activity in the Witcher series, to having a quarter-of-a-million dollar tournament in its closed beta, Gwent is shaping up to be the next big thing.

Care for a Game of Gwent?

At a glance, Gwent appears to be a regular CCG, but it couldn’t be more different upon closer inspection. Most initially striking is how you draw pretty much half your deck in your opening hand. Additionally, there’s no mana restriction, so in essence there is no ‘playing on curve’ as all of your options are immediately evident. From as early as turn 1, you have to come up with a game plan for pretty much the entire match.

Winning the game is also quite unique. Essentially every card you play contributes to your strength advantage; win 2 out of the 3 rounds and walk away with victory. Due to this unorthodox way of playing, many more strategic elements can be exercised all at the same time. It’s a brilliant combination of turn-by-turn decision making, overarching strategies perfected in deck building, and a level of mind games and bluffs seen only in games like Poker.

Continuing with the against-the-grain philosophy, Gwent minimizes RNG as much as it can. For example, in addition to the initial 3-card-mulligan, you can continue to mulligan cards in later rounds which allows for more flexibility instead of simply being stuck with what’s left over from the opening hand. Similarly, many cards mitigate randomness in favor of more reliable, predictable, and counterable effects.

Gwent can be confusing seeing as it’s so radically different from the competition, even more so when getting into the specifics within collection. Yet it’s not so steep a learning curve to be frustrating and still retains a satisfying level of complexity in the long run.

It’s because the gameplay is so shockingly refreshing that it makes this next part so painful. Currently, Gwent is not in an ideal state. I can hardly go a single match without something unwarranted happening like effects not showing up, not being able to complete an action, or the depressingly frequent freezing and disconnects. It’s so bad I don’t even want to attempt to play ranked. While CD Projekt Red have responded to the server issues with some in-game goodies, it’s still a massive disappointment – even when keeping in mind it’s in beta.

A weather effect, frost, fails to be shown on the 3rd row despite damaging my units.

The money situation in a free-to-play game will always be a hot topic. Because it’s free, the devs don’t really owe you anything, albeit with such a saturated market it’s not in their best interest to be stingy. Thankfully that’s not a big deal here. In fact, the card collection rate in general is fairly generous. Most players will be able to open up a keg (pack) or two a day just from casual play. However, picking up the gold/legendary cards seems to be exponentially more difficult than the other rarities. For some context, not all gold cards used to be legendary and vice versa. For clarity’s sake, CDPR made the two synonymous which flooded the game with too much of the rarity. For most people I don’t think this is particularly catastrophic, but those looking to have several competitive decks will definitely be feeling the pain.

Game balance is a tough thing to hit in a multiplayer title, and Gwent is no exception. If you’ve been following this game for a while then you’ll know immediately what I mean, it’s had notable balancing issues for pretty much the entirety of it’s existence and that continues to be the case even now. One day it’s enormous un-fun strengths swings, the next, overbearing board effects. It’s a sad situation having to think twice about opening the launcher for a game you like knowing you’ll have a negative experience regardless. While it’s true changes do happen, they usually don’t quite hit the mark. I have a deep seated fear the game will never be in a satisfactory state balance-wise. To give a bit of credit though, the overhaul made from the closed beta has been fantastic and unanimously for the better; it’s still just a bit off.

There’s no question Gwent will have a long and healthy life. It has strikingly unique gameplay, great visuals (especially in the animated cards), a popular source material, engaged developers, and a quickly heating up competitive scene. However, it’s hard to ignore the currently glaring issues. With some more time to fix their problems, even Hearthstone will have to up its game to stay relevant.