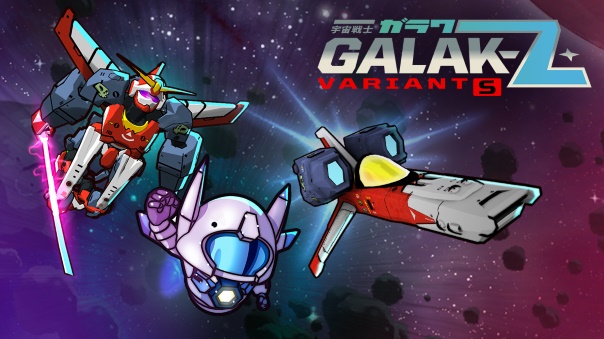 When I received the offer to give Galak-Z: Variant S a try, I was admittedly curious. I actually played the original a few years ago, and really love the idea of retro shooters, since I grew up on the R-Types, the Gradius’, and the Raidens. The really interesting thing here is that Galak-Z: Variant S is free-to-play (with microtransactions) on the Nintendo Switch. That creates a pretty interesting dynamic. There are not many games that require an Internet connection with the Switch, but that number is growing slowly but surely. As a game that’s essentially a F2P mobile title on console, an offline mode would certainly be a boon, so players wouldn’t have to rely on Wifi/Hotspots when playing on the go, if that’s their desire. But, that’s how it is for now. Galak-Z: Variant S is a sequel to the last Galak-Z, and is a game that should be a twin stick but is not. You control a cool pilot, who can choose between a mecha mode and a ship mode, and play through short stages and fight enemy fighters and giant bosses. 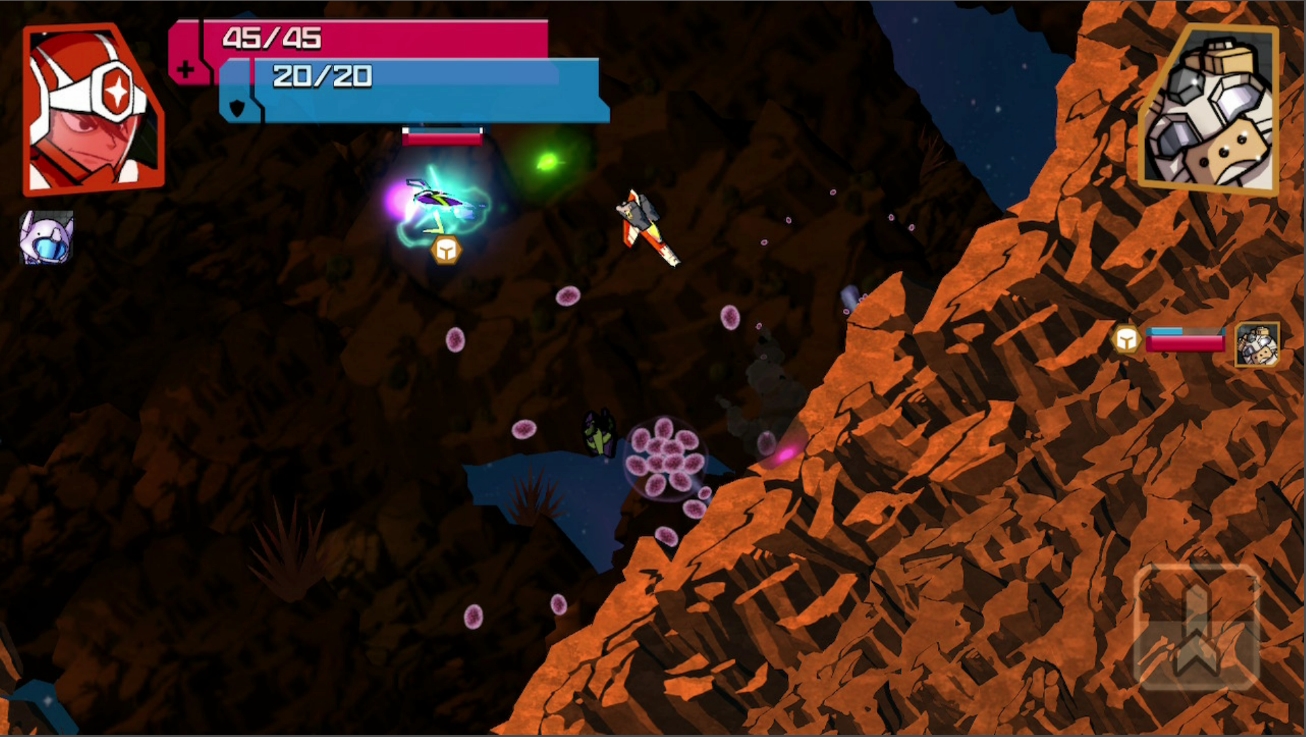 It's time to shoot down some bad guys!

Now, the original Galak-Z had your typical space-shooter levels, so they were long, challenging, and honestly, pretty exciting. Variant S is a mobile at heart, so the stages are very short and not especially challenging (except for the wildlife, which I’ll get to), so you can get in and out of a stage and move on to the next one. Except you also need to grind the same stage over and over to get all of the materials you can out of it. You have quite a few menus that the game will walk you through in a lengthy tutorial. I did have some issues where the game would not let me proceed through a menu screen during this time, and I’d have to reset the game by going back to the menu and closing it out. That didn’t happen often, but it’s still worth mentioning. Speaking of menus, I want to also point out that the “Ship Status” menu in the first tab does not work as intended with a controller, for me anyway. You can’t scroll the stat menu up and down to see all of the numbers. So if that’s important to you, be aware that this happened when I played with Joycons plugged into their controller.

The gameplay is fairly simple: You pick a mission, where you’ll see at least one of the items you can pick up in the stage, the enemies you’ll fight, and any stat boosts the player/enemy might have. The right side has a “Boost” screen, where you can spend Crash Coins (RL currency) or Salvage (In-Game Currency). Salvage can only be used on Attack/Defense/Extra HP, whereas Crash Coins can be used on Extra Pilot/Ship Experience. The Crash Coin boosts are not expensive, and you can find the Coins in the Relics (Glowing cubes) you get from certain fights. Those are unlocked in the Lab and contain a variety of items. Back to the pre-mission, you can also equip Bots to your ship, which give extra stats and damage to your vessel. The stages themselves are short, and you use L2/R2 to move the ship forwards/ backward, and the left stick to aim/navigate. I really feel like it’s missing out on the Switch not being a twin-stick, but I suppose that’s to keep it on par with the mobile version. 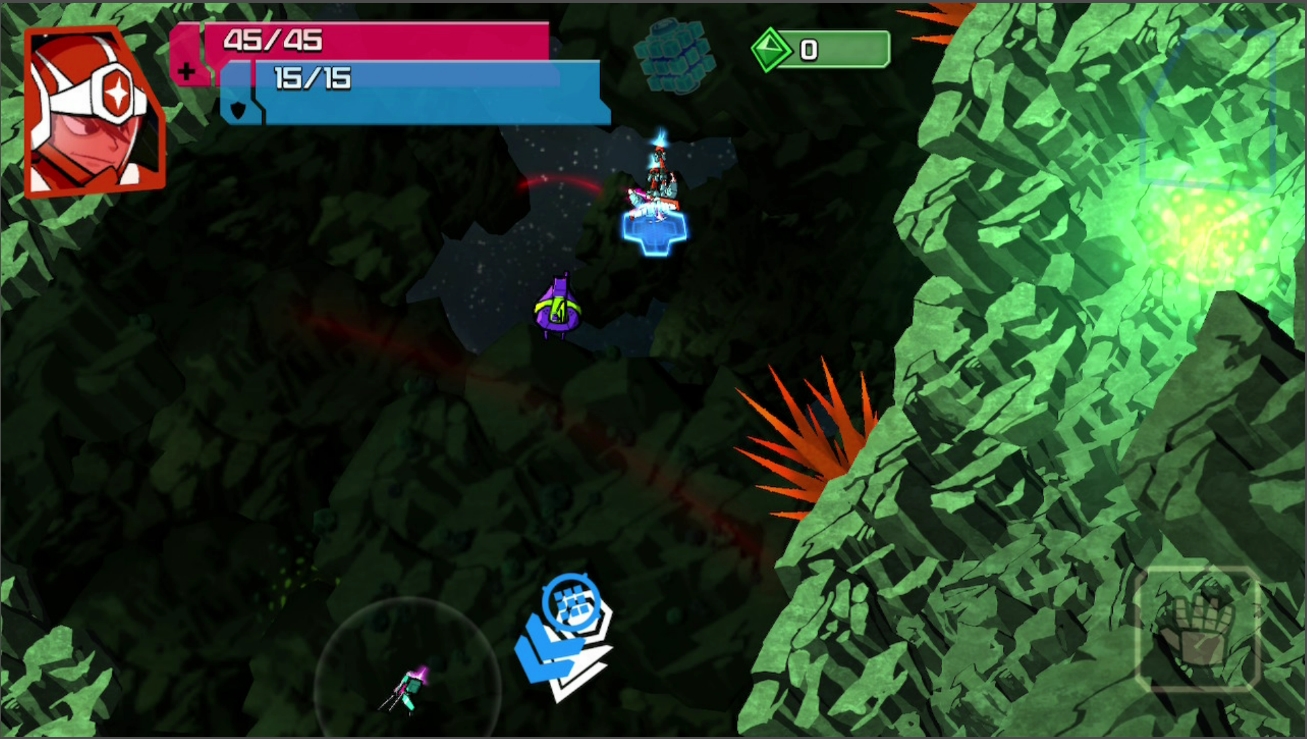 The mecha is a bit easier to use, but more dangerous. No range, just a sword.

The actual control of the ship is a little floaty, so you have to be very careful how long you propel yourself and in which direction. There are lots of flora and fauna that can impede your travel, either by slowing you or dealing damage (and then more damage). The upside is that you can make the enemies suffer the same fate, which is far easier with the Mecha, who has the special ability to “throw”. He grabs the smaller vessels and hurls them in a direction, usually into a wall. They take damage, but if you toss them into the flora, they have to take the slows, damage, et cetera. The ship has an ability that fires a series of missiles in a cone that homes in on a target. Dealing damage will build up a meter on the bottom right side, and that’s how you figure out when the special ability is up. It honestly doesn’t take too long. X is for your special ability, Y/A is your attack, and B is the maneuvering ability (such as dodging). You navigate the stage, blowing up anything in your path, fighting a boss, and move on to the next stage. Occasionally in these stages you’ll see a blue pointer arrow, in addition to the white arrow that points you to the goal in the stage. This leads to a special mini-boss encounter, where victory can lead you to one of those Relics mentioned above.

These Relics give you Crash Coins, Salvage, Bot Parts, and Equipment Parts. This is the standard mobile system of “Unlock pieces of this item to get the whole item”. You then spend some Salvage to create the item and equip them to your Ship/Mecha as appropriate. These include new weapons, Ship Parts to get a better speed/mobility, and so much more. These are incredibly important to have, so you will ultimately have to grind since you can’t get them in the shop at all. Here’s where things start to get dicey. It takes about ten minutes or so for these to unlock once you put it in your lab. You can spend Crash Coins to unlock them expediently, but it’s only 1 or 2 coins. You can get those in the crates themselves, from Achievements and other ways. You get a fair amount of the resources in-game just for playing, so you can amass a small amount. But you need those Relics to upgrade your ship and mecha so you can continue to play at a steady pace without having to stop. So it does feel like you need to spend at least a little money. 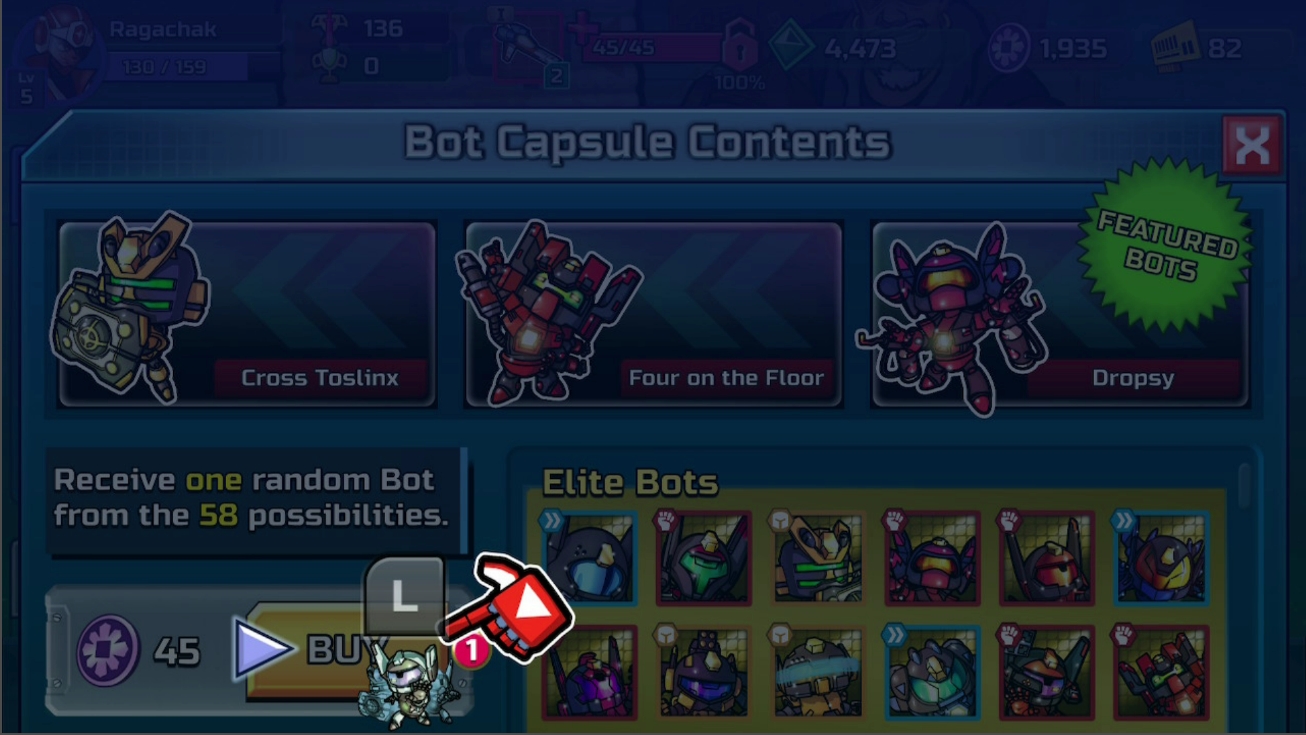 This is one of the many times the screens bugged out.

Speaking of money, let’s talk cheddar for a bit. Some might say this game is pay-to-win, because you can buy bots for use in the PVP mode and to equip on your ship/mecha. These crates can be bought with an in-game currency (Bot Parts), but it’s easier to spend on the real-money crates for 45 crash coins. Can you get rare, insanely strong bots for your ships? You bet you can. Is it a guarantee? Nope, I received several commons alongside my rare bots. But will these make you any better at the game? Absolutely not. You still have to know how the movement works, when to fire, and when to dodge attacks, so I hesitate to say pay-to-win. They can make you stronger, but not better. I’ve still died in stages. It is pay-to-progress though. Any console game where you have to wait before you can progress (unless you spend money) is worth pointing out to potential players. If that doesn’t bother you, or you’re fine to play a stage or two then wait? Then it won’t be an issue for you.

Let’s talk about death though. It’s bound to happen in a game like this. When you die, if you give up and go back to the Mission Select, you lose all of your items you picked up in the stage itself, unless you continue using Crash Coins. Again, it’s a small number of coins, but not having the option to use Salvage concerns me. The stages are not so long that you can’t do them again, but the challenge does grow the deeper and longer you play the game, so if you haven’t been grinding like you should, you might not want to start from scratch on a stage. Reviving gives you back your HP and lets you keep your Salvage/Relics you picked up (provided you don’t die again).

I do want to talk about Galak-Z’s PVP briefly. You select a team of bots to be your squad, and you will play as the regular character you use in missions, to fight bot teams made by other players. You will receive three opponents to fight, and you can refresh these if they aren’t what you want (for Crash Coins). Winning against all three of these will net you a Battle Relic, for even more awesome stuff. You can only receive these once a day though. This is a great way to level up bots, so you can fight through all three and wait or refresh and have more fights to go through. Then if you want to use them in PVE, just unequip them from the PvP area, and equip them onto the Mech/Ship. I am a little disappointed that so many of the characteristics of the mobile version of the game carries over to the Switch version, though. 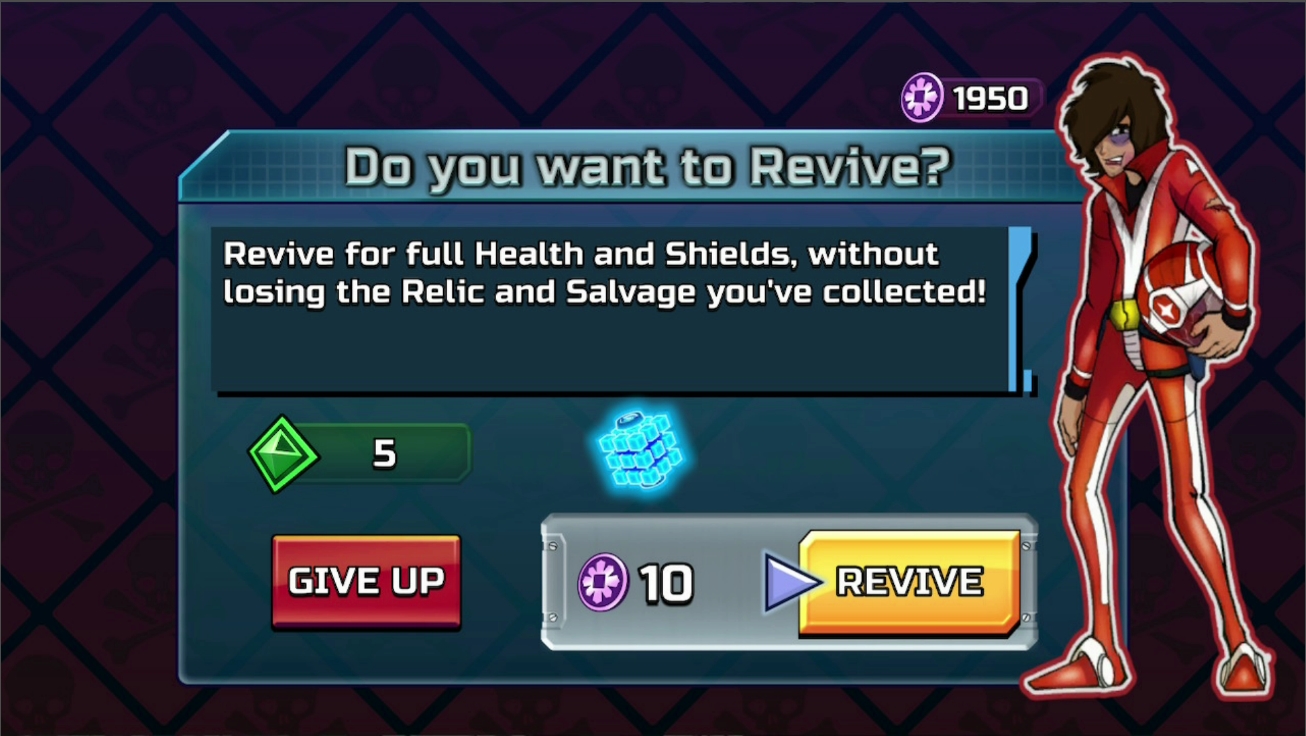 No option for free currency instead? Disappointing.

This is a very enjoyable game, but it has all of the trappings of a mobile title. Normally, this does not concern me so much on a free-to-play game, but this is a free-to-play model on a console game where you have to wait in order to progress unless you spend money or get enough achievements/Relics to have crash coins. You can also spend Crash Coins on lots of Salvage too, so that’s yet another way to progress a bit faster. It’s fun, for a few stages here and there, and I enjoy the challenge and the gameplay. It’s visually quite appealing, and the bot designs are just awesome. I’m disappointed those “bot ships” I don’t get to use instead of the Galak-Z, at least, not in my gameplay. It’s a fun experience marred by the plethora of freemium/pay-to-progress options that are in the game. The argument can be made that you don’t have to and that you can get Crash Coins in-game, but the fact that the option is there on a console is such a weird, unsettling choice to me. You also receive a certain amount of these currencies (Salvage, Crash Coins, Bot Parts), but it’s not a whole lot of that. It’s a tease. But beyond that, I did enjoy the actual gameplay.

The reviewer was given Crash Coins to get the full experience of the game.