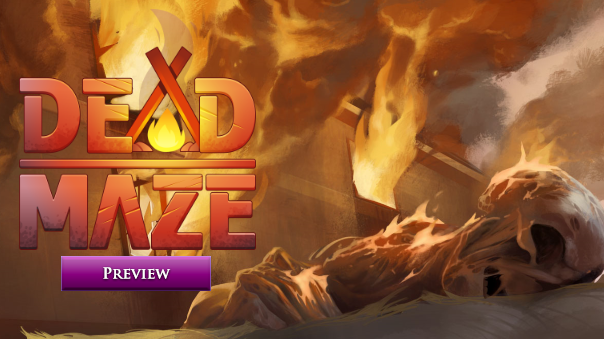 Dead Maze is a free-to-play zombie survival MMO where the players are overwhelmingly outnumbered. At any point, there’s a button you can click to see how many players (Survivors) are there, and how many Zombies are roaming that map. For example, as of this writing, I’m on a map with four survivors, and 442 Zombies. I’ve never seen a map completely cleared. They respawn so fast. I was killing zombies in a building, and by the time I got to the end and turned around, I had more zombies to fight. They do a fantastic job of capturing the peril of one of this particular trope, where the threat is real, omnipresent, and you have to do anything and everything to stay alive. You can work together with people, trade them goods like food, water, weapons, and wander from town to town, slaying the threat and unraveling the mystery of what exactly happened to cause this apocalypse.

Dead Maze is a top-down, isometric ARPG MMO set in California, starting near the suburbs of Sacramento. There are factions in each of these towns, each who follow a particular role or duty, but as of yet, I haven’t seen any “reputation grinding”. I think it’s just flavor to keep the story rolling because most of the story decisions/role decisions make a lot of sense. You play as a survivor of an attack, who winds up away from home, and saving the life of a young girl named Chloe Thorn. There’s a mysterious event that led the world to this, and it’s up to you and the other survivors to find it. You’ll have quests to undertake, along with side-quests and lots of loot, but here’s where my problems are. I spent something like two days trying to find quest objectives, and I’m still searching around town for one. It was easier to find the goals for side-quests. You have no mini-map, no map to pull up to check around town. 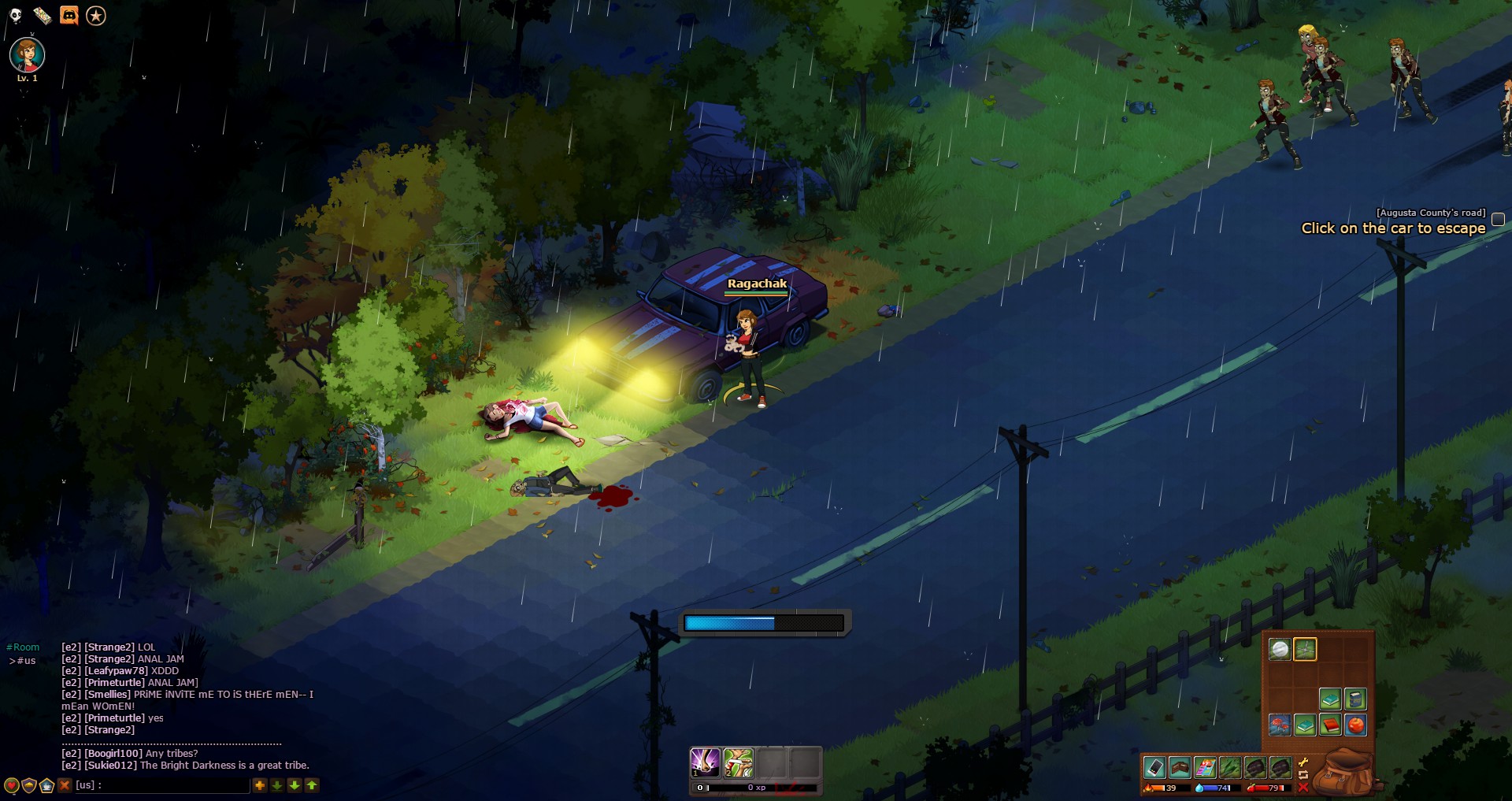 It was a dark and stormy night... no, really.

I’m sure more experienced people than me have had no problem. When there are lots of players around, it’s not as hard to advance, because at least someone is bound to know what to do and will be willing to help. But this is a game where it really is survival of the fittest. You have to decide if that other player who is starving/thirsty needs the food or water more than you do. Because there is a mechanic where if you don’t eat/drink regularly, you will take penalties to damage dealt/received, and you do not want that. So you have to find camps regularly, and keep various food and drink in your inventory along with a pile of weapons. But please take care to read every food/water item you consume. Some of the food will lower your thirst, but some will increase it, making you need more water.

Those campsites are also where you level up. Killing zombies and completing quests gives you exp, but holding too much exp, also comes with another danger: threat. A small bar at the bottom of your screen, the “threat meter”, increases the more you kill zombies. When it fills up, it goes up a level, which increases the damage you take, and displays that zombies see you as a greater threat. But you can go back to camp and dump that exp into your character to level up, gaining new skills and abilities, as well as cosmetics. One thing I hope gets added here, is increasing the inventory. I’m still leveling, though the process has been incredibly slow. That’s one of my biggest complaints about this despite loving it, is that the grind has been horrific. I see people in the 40s/50s even in the early maps, but I have no idea how they did it or how long it took. They aren’t very responsive, so it makes me wonder if they’re botting somehow. And yes, it does require you to grind a lot, and to constantly on the lookout for weapons and consumables at all times. 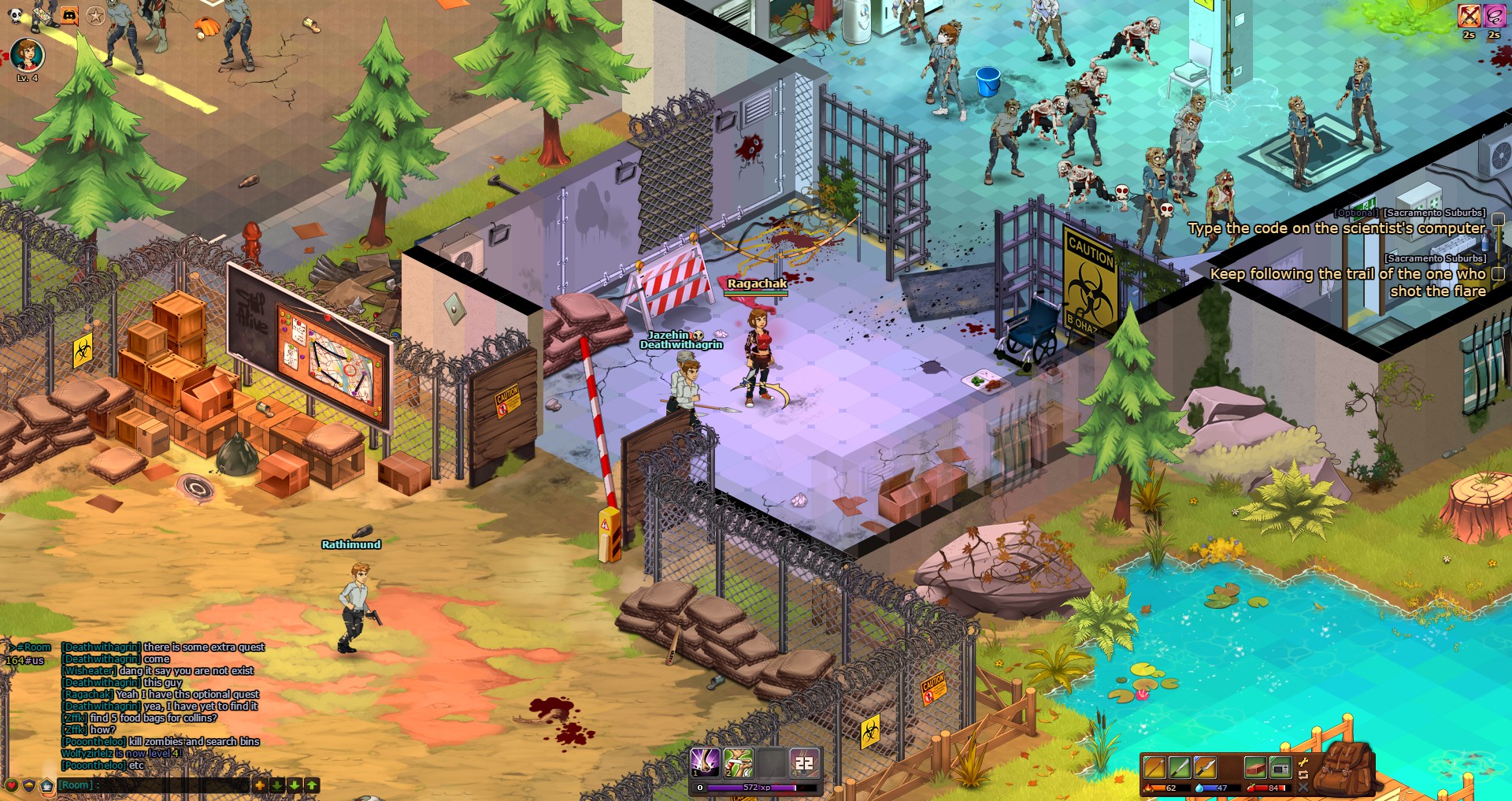 That ... is a lot of zombies to fight alone.

Because virtually anything is a weapon. Computer monitors, microwaves, forks, knives, shovels, katana, boards, you name it. If you can pick it up, you can swing it. These items have various shelf-lives before they break and become unusable. This makes sense, but it still can feel very frustrating. I also learned that you can use stuff like tape, lighters, screws, etc, to repair these before they break, turning them into new, more interesting weapons. Sometimes this adds special effects to the weapons. This can include fire, electric shocks, you name it. This was one of the cooler parts of the game, I admit. To the game’s credit, generally the more flimsy items are actually flimsier, like a computer monitor. They’ll hit hard, swing slow, but break faster. From electronic nightsticks to bricks, almost anything is a weapon.

Another thing players need to be aware of in Dead Maze is death. It’s gonna happen, and you drop all of your items into a backpack when you die. I have never gotten mine back, but from what I understand, you can. Other players it seems can take that loot for their own, and the farther away you are from a camp, the harder that will obviously be. You can get a second wind though, and so you have to make it seriously count. But if you’re in a pinch and going to die, you can evac back to a camp, but you will still leave your stuff behind. So be smart and safe, if you’re gonna run back to get your gear. The inventory’s pretty rough like I said, and having to manage such a small backpack with crafting mats, consumables, and weapons is really tough. At least there are six slots for equipped weapons that aren’t in your backpack, so you can keep stuff there too. 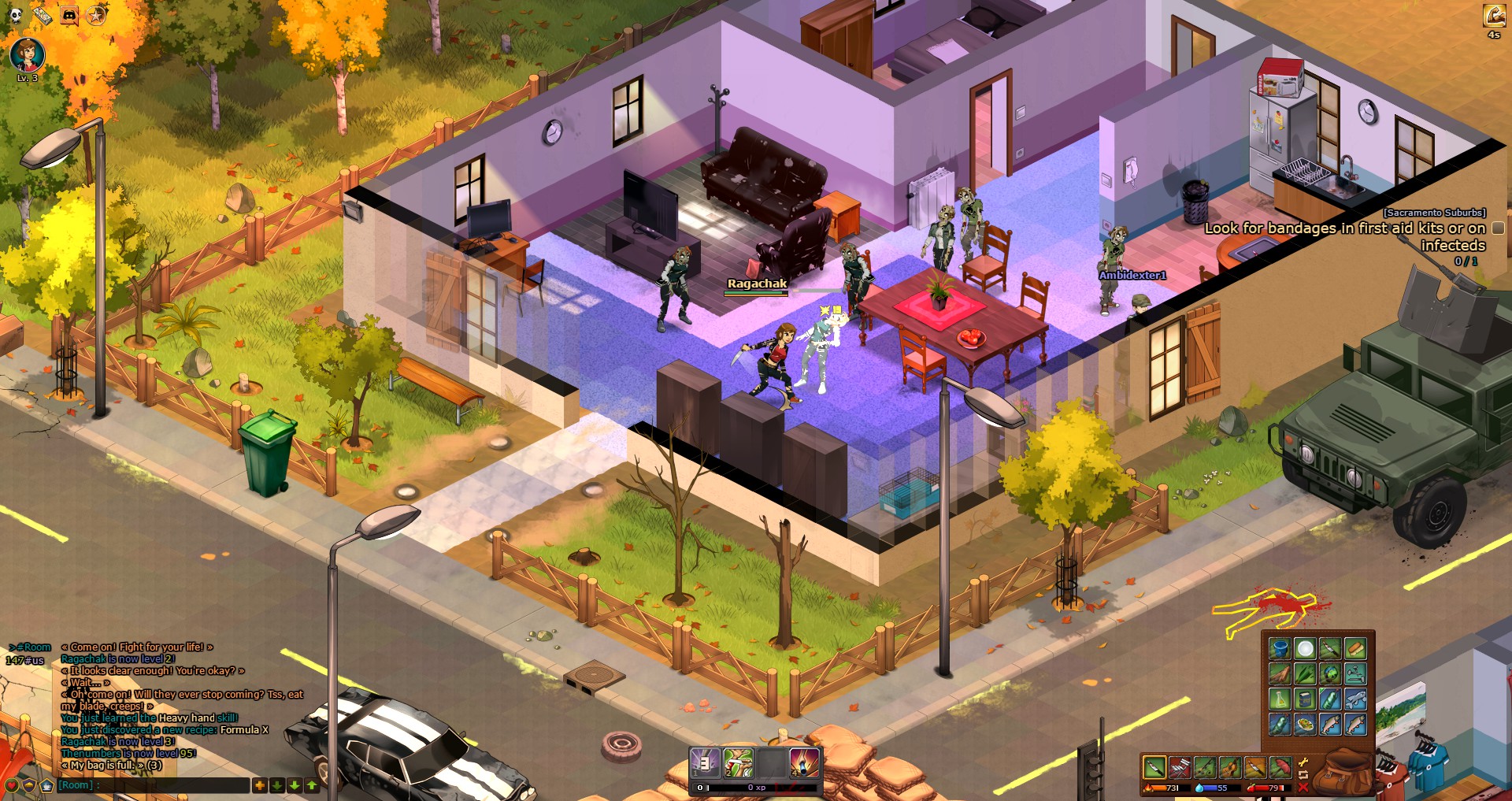 Don't get too bold. Going alone and deep into enemy territory is dangerous.

Dead Maze has a very bright, colorful, fun design for such a dire, depressing situation. I really love that contrast. I think that it really captures the difficulty of being alone and being pitted against an unstoppable wave of the undead. I wish it were more clear which zombies were special and which weren’t, and a better idea of where to go and what to do. Some of the special/elite zombies are very clear: they’re bigger, taller, better equipped, and half of your life disappears when they hit you. That part really sells it. Or entering a room and you get shocked/stunned every two seconds. The game is frustrating, but definitely fun. I think if you were playing with friends, this would/will be a lot more enjoyable overall. It’s a well-told story, incredibly challenging, and seems to offer a lot of variety in terms of weapons, abilities, and the maps. I’m really looking forward to seeing it grow. As of right now, it’s still a bit rough around the edges, and I don’t know if it’s there plan to make it any easier, but fans of a serious hardcore challenge will definitely get something out of Dead Maze.