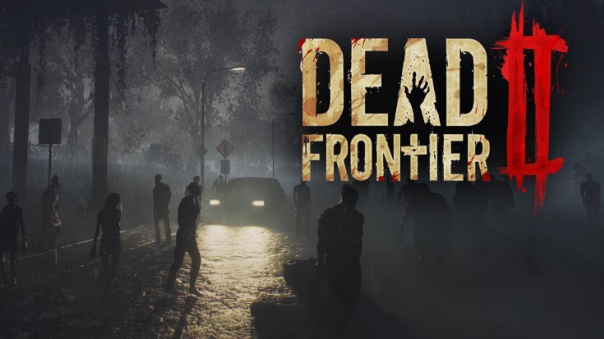 I wasn’t sure what I’d be getting into when I was offered a chance to review Dead Frontier 2, as I’d never played the first one. I don’t even know if there are many similarities between the two games. However, when I saw that the game was tagged with survival and horror, I got pretty excited, as I tend to love zombie survival type games. Dead Frontier 2 wasn’t quite what I expected, but it was an enjoyable experience overall, all the same, especially for a free-to-play title.

You start out by customizing your character. The options aren’t extensive, but they’re enough to allow you a feeling of looking how you want to, within reason. A selection of face types, hair styles and colors, skin tones, and facial hair lengths, and you’re pretty much ready to jump into the game. You don’t get to pick your clothes though, so everyone starts off wearing the same stuff. That’s okay, as you’ll probably swap your clothes before too long for stuff with better stats, and your appearance reflects what you wear.

Now you enter the game. The first time you enter, you’re not given any choices; you’re just placed in a server. If you quit to the lobby you’ll see a list of games you can join, some PvP oriented and some not. You can also choose from a list of servers, such as North America A, North America B, Europe A, etc. Frankly it was a little annoying that you don’t have server choice right away, but such is life.

It was also a bit off-putting that there wasn’t any sort of tutorial to speak of. The closest thing to a tutorial is if you accidentally manage to press F1 and get a view of the help screen. In fairness, most of the mechanics in the game are going to be familiar to the vast majority of players. All the same, tutorials are placed for people who have no clue what’s going on, and it seems like a game like this one could at least have popped the help screen up when you log in to get you started.

So there you are, standing next to your car in the pouring rain. You look around and see fires off in the distance. Chances are you also see zombies. But to me, I just stood and looked around and realized how pretty this free-to-play game really is. The torrential rain feels torrential. The fires glow with a warmth that makes you not want to dance on them. The zombies have faces that only a mother could love. Well, also maybe a farmer named Herschel, but we saw how that turned out.

You will see a police station ahead of you. You’ll want to hoof it on over, probably killing a couple zeds en route, provided you can figure out that to shoot you have to hold the right mouse button to aim, first, THEN click the left button. Yeah, no off the hip firing. THANKS TUTORIAL FOR TELLING ME.

Once inside the safety of the police station you’ll find vendors and other survivors. This is your first major hub, and several of the NPCs here give you quests. You’ll also find access to a mailbox and a vendor that will both buy things from you and sell you supplies. He seems like he’s a middleman for a player based economy. The other really nice feature of the police station is an account stash. By default you have two character slots, though more can be purchased via cash shop. Since this is an account stash, you can easily swap items between characters through its use. Believe me, you’re going to need the stash. Between the account stash and the vehicle, you can hold quite a few items, but you get a lot of stuff, too.

The game is played generally by picking a building, usually one where you have a quest, and going room by room through the building to clear zombies and rifle through containers for loot. Each room is its own ‘instanced’ area. You can move between rooms, but zombies cannot. They will, however, spawn into a room through the door. It’s strange, but there you have it.

The buildings are HUGE though. I’m not sure if they’re procedurally generated, as I haven’t gone back into the same building on different days, but there is a message that tells you how long until the “worlds” regen. When this happens, I do know that all quests reset, so there’s not much point in getting more than a couple quests at a time. I’m generally assuming that world resetting means that loot containers respawn and refill. How much procedural generation goes into that I didn’t have time to explore.

I feel like the buildings probably have upwards of 50 rooms. You’ll enter one room, which will lead to another, which will have a hallway, and 2 doors in that hallway have another hallway, plus there will be a stairway down and another going up. It’s glorious on the one hand, but can get tedious on the other, as you’re trying to find objectives for your quest, and maybe some keen loot. Loot works on a damaged → normal → superior → rare type scale. Each building that I’ve encountered so far had a door that required a key to get into, and once inside that area there was usually a stronger monster than the rest of the area, and at least one piece of higher quality loot.

The combat in the game is pretty fun. It feels smooth and fairly intuitive (right click to aim, then fire, okay, but why no fire from hip? Harumph.) The hitboxes are where you expect them to be and your firing spread feels realistic. As you aim down the barrel, your sights narrow, allowing for a cleaner more accurate shot. Of course, if you’re being surrounded by zombies closing in quick, sometimes pumping out some shots is just what you need to help paint the walls with chunks of zombie.

As to weapons, I’ve so far encountered a couple different pistol types, a shotgun, a rifle, and I’ve seen a submachine gun on the vendor. Pretty standard fare. Each weapon type of course uses its own ammo, though, and ammo stacks up quick, and if you’re using more than one type of gun, your inventory will be swamped. Thankfully there are also melee weapons including wood boards and iron pipes early on. These will give you something to fall back on if you’re a little light on ammunition.

This brings us to one of my minor beefs with the game: Inventory management. I get that it’s a key feature of the game, but some aspects of it feel enormously tedious. Shotgun shells stack only to twenty, for example, and twenty shells will kill 10-15 zombies in all likelihood. Plus, quest items take up individual slots. I had to collect 5 samples of blood, which was 5 of my base 20 inventory slots. I was not happy with this. It seems like they really plan to make a profit off of selling inventory. This isn’t bad in and of itself, but the way it’s implemented, mostly with the quest objects and ammo, really is a bit trying.

Also, the story in the game seems, so far, to be fairly minimal. You get glimpses of the world and lore through objects like newspaper clippings, journals, and records. I actually think these are really cool, just as flavor fluff, but when you read them you also gain a bit of experience, which I absolutely think is cool.

The other thing I sort of miss from other survival games is base building. Yeah, you have to eat and drink, and can get burns or cuts or illnesses in Dead Frontier 2, but that’s about it as far as the survival aspects, and the food and drink seem like just more inventory push. 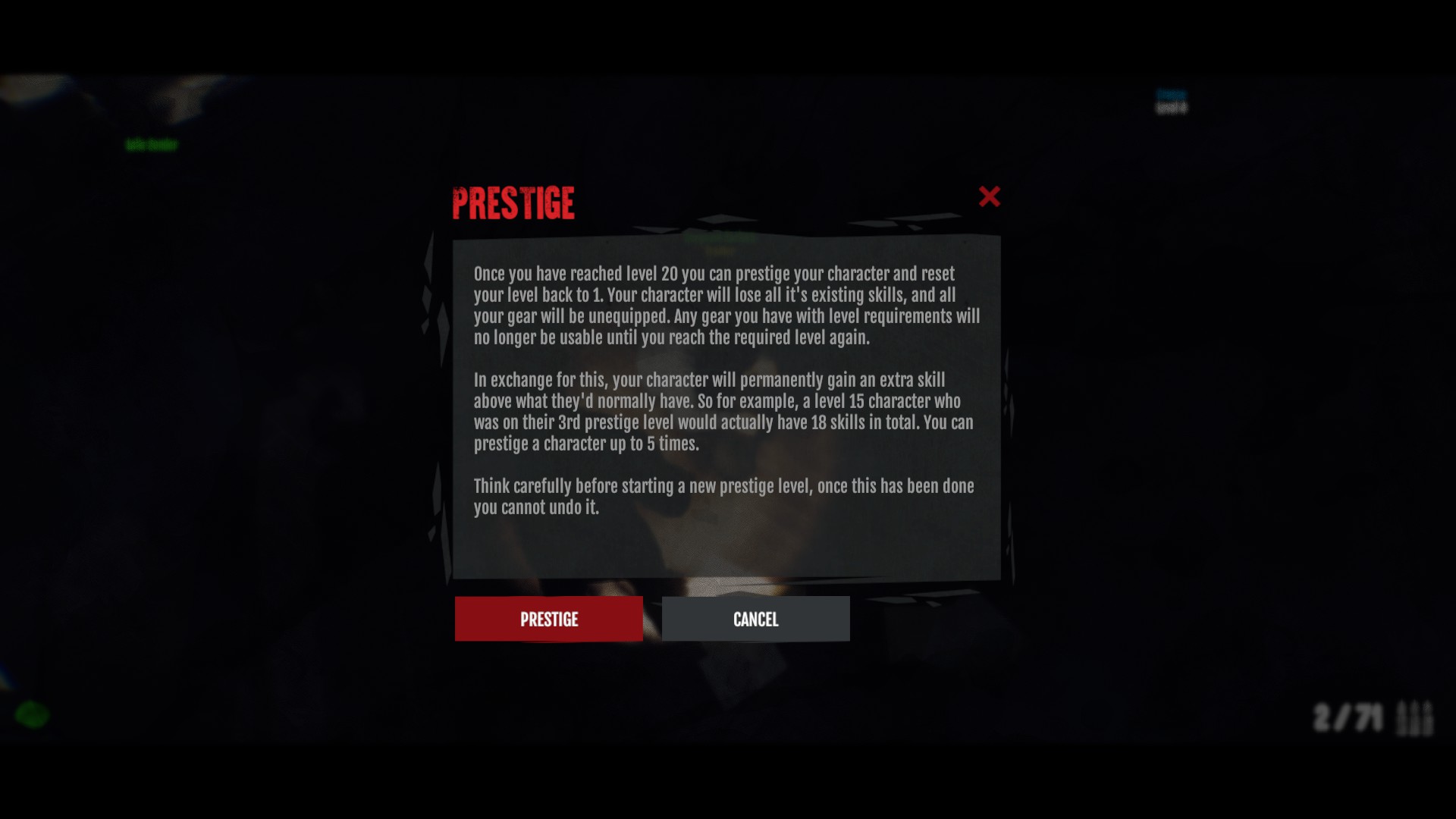 Dead Frontier 2 is a fun game to play with friends. My fiance and I knocked out a couple buildings and did a couple quests together, and had a great time. I’m not sure how long I would stick with the game, despite its novel prestige feature. That is to say, after you get to maximum level, you can choose to start over at level 1 with an additional skill point available. This can be done up to five times, allowing you 25 total skill points rather than the standard 20 a character could reach. Still, unless things get very different when you go to new areas, I’m not sure that I would have the desire to play the game that long.