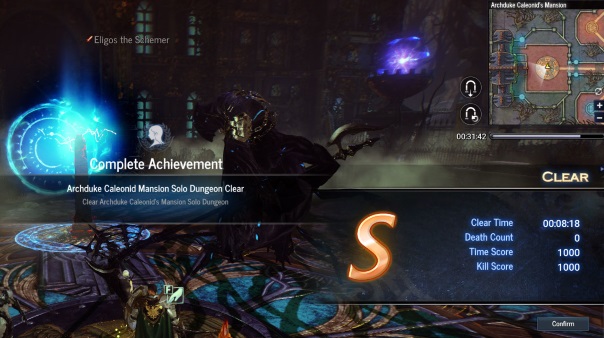 We recently had an opportunity to sit down with the Astellia Online developers to talk about their dungeons. Dungeons are a key function of MMOs, and we wanted to find out what made their systems different and special in the Free-to-Play MMO sphere. This couples with a blog post they released, which can be found in a link below.
1. MMOHuts: One of the more interesting things I noticed is that while it will feature Dungeon Tickets, a popular trope in Korean MMOs, they will not be purchasable in the Cash Shop in the Western release. What inspired this decision?

Astellia Online:  To our team, it just didn’t feel right to gate this type of content. Most of all, something as innate to MMORPG’s as crawling dungeons, which is arguably one of the key trademarks of classical MMO’s. In internal meetings, we compared it to buying a car, and then having to pay for different FM radio stations whenever you wanted to listen to a
different style of music.

2. MMOHuts: Performance is a major factor in how you’re rewarded in a dungeon, from F to S. What influences your performance, and is this standard for all character archetypes, or does it vary depending on what you’re playing?

Astellia Online:  The logic behind dungeon scores is straightforward, dungeon scores rely on three major factors: Clear Time, Death Count, Kill Count. This logic stays the same regardless of class, but before all the healers out there get their pitchforks: I have personally been able to play a 100% legitimate healer with DPS Astels and get S Rank in all of the dungeons even on Solo Mode. The rank system is there to provide players with the ability to challenge themselves and be rewarded for it.

3. MMOHuts: On the topic of Performance, none of the loot is bound to rank in dungeons of Astellia Online, but rank does affect how much loot you acquire. Can you tell us how much loot players can expect based on the various ranks?

Astellia Online: The dungeon loot system is divided into multiple parts, in which the performance rank is used to scale each area. So for instance, upon completion players will receive an
average, a set range of items (ie: Weapons, Accessories, etc…). Where a better performance will push the scales in favor of an increased chance to receive higher quality items, like a heroic item instead of a rare one. Another facet of the system rewards players with additional Asper, the game’s currency, for completing the dungeon with a high rank. The goal of the system is to provide reasonable incentives to do well, while not punishing those who enjoy taking a more casual approach.

4. MMOHuts: How large are the parties for dungeons in Astellia Online, and how important is party composition? Will each dungeon absolutely need a tank/healer?

Astellia Online: The default party size is four players, and while you do not need a classic party makeup for story progression, the high-tier dungeons will be significantly more difficult without a
tank/healer setup, although not impossible. We anticipate that our community will come up with many creative ways to utilize the Astel and Skill enhancement systems to complete dungeons.

5. MMOHuts Online:  Since dungeons are a major part of the gameplay of Astellia Online, how will it teach the mechanics for boss fights? Will these mechanics be teased in enemy packs, or will they just have to learn by doing the boss fights until they learn them?

Astellia Online:  This is a good question, as the dungeons are introduced via the main storyline the initial playthrough is done in a campaign mode, which is the easiest mode. Through the campaign run, all of the core mechanics will be shown, and as players return to the dungeon those mechanics are expanded upon. This way players get a taste of what is in store as they progress through the game without being thrown into the deep end.

6. MMOHuts Online: Will friends that group up together to tackle dungeons be scaled to match each other’s level or will higher-level players be able to breeze through low-level dungeons and power level other players?

7. MMOHuts Online: We do not have dungeon scaling in the game currently, but I definitely like the concept. I will note however that power leveling via dungeons is not at all efficient, instead, you would do better to work together through quests, dungeons would be better for earning more astels and equipment.