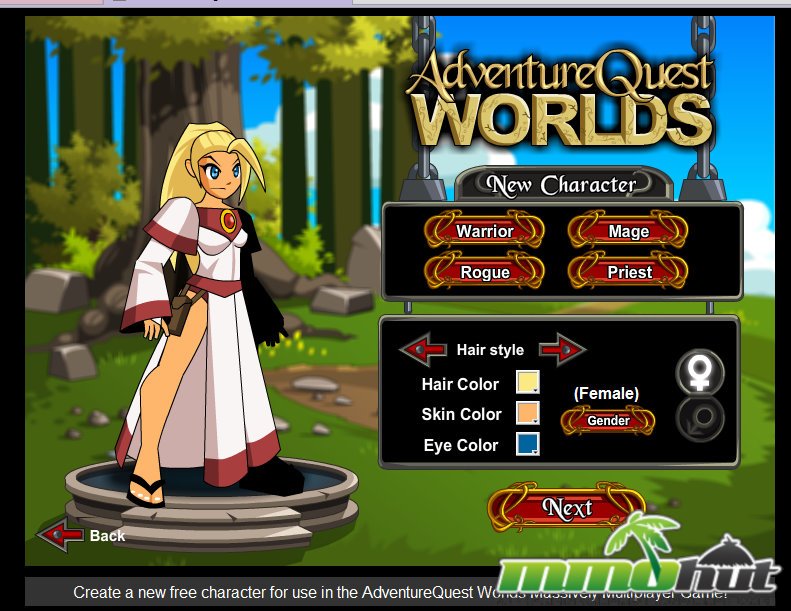 After the release of AdventureQuest in 2002, Artix Entertainment quickly rose to fame. The bright art style and simple gameplay made AQ a great online game for casual gamers. In late 2008 Artix took the franchise to a whole new level with the release of AdventureQuest Worlds. The new MMORPG is based on flash and plays on web browsers, which makes it just as accessible as its predecessor. But AQW brings much more to the table than the single-player AQ.

Despite being a browser based game, Adventure Quest Worlds offers players a large array of play options. The game screen can be set at four size options including tiny, normal, large, and HUGE. A full screen mode is also available but one of the advantages of browser games is the ability to play them casually while web surfing, so I doubt this feature as useful as the others. There are several server types available as well, some allow free chat while others limit player communication to predefined phrases. Like Club Penguin, AQW tries to be as child-friendly as possible and nothing scares parents more than the idea that their kids could be chatting with a stranger on the internet. At least one server is reserved for premium users who pay a monthly fee, but players are free to hop servers at any time. 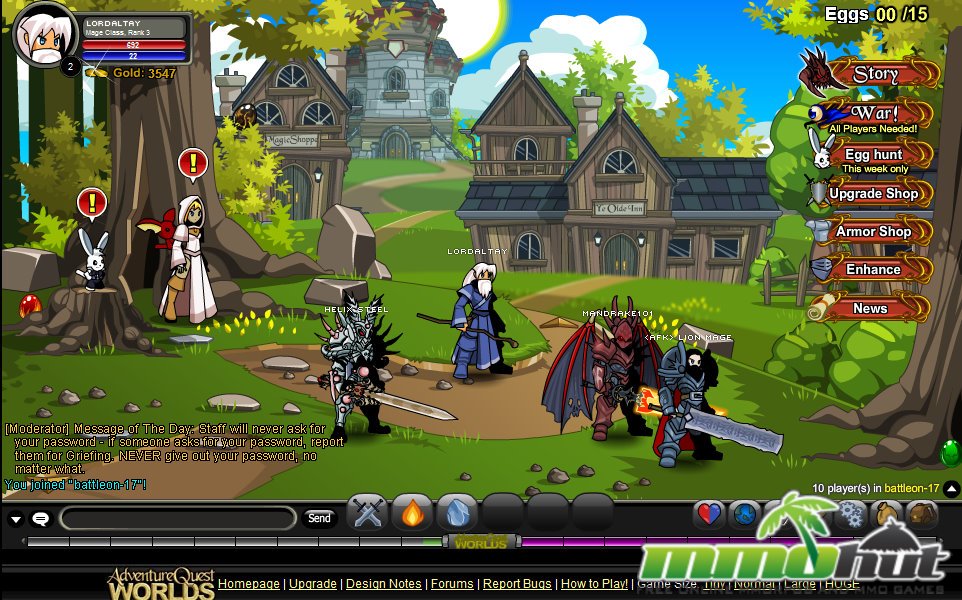 Character creation in AQ Worlds is actually done prior to registration, which is handled as the last step before playing. There are four classes to chose from and all are standard fantasy MMORPG archetypes. Warriors are the best choice for beginners since they have the most powerful standard attacks. Rogues also mainly fight at melee range but rely more on skills to inflict damage.Mages are the offensive spell casters while Priests play a supportive role. These four are only the base classes, but as players increase their base and job level they can switch to dozens of more advanced ones. Appearance customization consists of choosing a hair style along with hair, skin, and eye color. After entering the game, long time Artix fans will recognize the distinctive graphic style and feel right at home. While AQ Worlds bears the name of the original AQ, it is more similar to DragonFable, which also allowed players to walk around and explore a virtual world.

Adventure Quest Worlds is a dynamic game that mixes story-driven quests with with the option to simply grind things out. New players are advised to run through the ‘prologue’ which starts with a comedic cutscene showing the player fall down a cliff and into a forested area. Here they will encounter a small devilish cat creature known as an Ebil. The dialogue with this NPC will reveal the laid back attitude of the game’s lore. Internet speak and irony make the text interesting to read but does come at the cost of immersion. In my opinion this casual style is a plus but players looking for a game world to get lost in may be put off. Movement in AQ worlds is entirely mouse controlled, as is combat. The game world it self is broken into a series of tiny zones connected to one another. Manual movement can be cumbersome when covering long distances, but a handy map allows instant teleportation to nearly anywhere in the game world. The world itself (known as Lore) is currently made of 7 large areas, each containing multiple zones. If the map is any guide, there are plans to add much more content as only a tenth of the area is currently marked as ‘explored’.

We’ve Got a Quest For That!

Combat in AQW is simple but much faster paced than in previous titles. Players will encounter monsters as they travel and can engage them by left-clicking on them. This will initiate combat and generally keep other players from butting in (unless they’re partied). Besides exchanging auto-attacks, players can use skills or spells which cost mana. Casters are much more reliant on mana, which makes them slightly harder to play, but the hard work pays off at the end with more powerful high level spells. Experience and gold are accumulated by defeating monsters. Gold can be used to purchase or enhance gear and it is vital for players to keep their weapons up to date. Most enemies that are worth grinding off at any given level are too weak to seriously harm players, but an up to date weapon makes the hunting process much more efficient. Quests also play an important role in the game and are readily available in nearly every zone. Most quests are repeatable and require players to simply kill a certain number of a nearby monster, or to retrieve items that they drop. Oddly, quest items are placed into a ‘temporary’ bag as they are looted and will be lost upon logging off or closing the browser window. This means player will have to either finish the quest they’re working on or lose out on time if they have to get off the computer in a pinch.

Life in the Browser

Adventure Quest Worlds joins the ranks of a small but growing group of persistent browser-based MMORPGs. Comparisons with Runescape are inescapable, but the two games are entirely different. While Runescape is more of a traditional RPG that happens to be played in a browser, AQ Worlds caters to a casual crowd and can be played in much shorter bursts, with far less time spent traveling, resting, or otherwise not playing (also known as ‘down time.’) It is by far Artix’s greatest game to date, but since it relies on the same art style and themes, it is unlikely to win over many fans who weren’t fans of their previous titles.

While AQ Worlds is free-to-play, there are a number of payment walls that players will encounter. Firstly, subscription membership unlocks access to many features unavailable to the free player. Of these, the most prominent are access to advanced classes, player housing, and member only areas. Membership can be purchased in blocks of 3 months ($19.95), 6 months ($34.95), or 1 year ($49.95.) In addition to paid membership, players may purchase ‘AdventureCoins’ which act as currency in the game’s premium shop. Despite being a full fledged MMORPG, AQ Worlds manages to keep a segmented gameplay experience. Heading from zone to zone, and the multiple levels of access granted to different tiers of players still feels a lot like moving from page to page on a browser. Because of this, AQW is never as immersive as browser MMORPGs like Earth Eternal but is far more approachable, especially for casual gamers unaccustomed to or uninterested in MMO power sessions.

Adventure Quests Worlds is a fun, casual, friendly MMORPG. The game stresses ease of play and boasts a humorous atmosphere. While it was designed with children in mind, AQW can be enjoyed by a broad audience. Limited graphics and the fact that many features are only available to paying users prevents a higher score.
Official Site
#AQWorlds