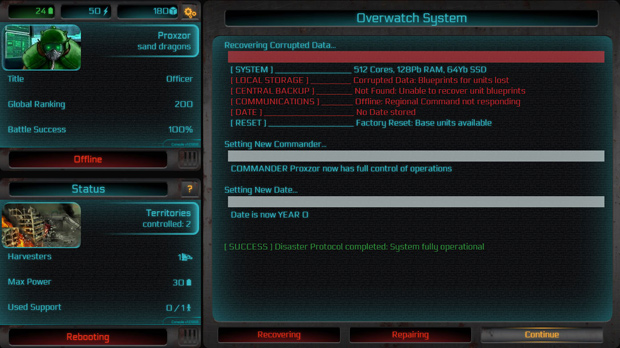 There was a relentless war and eventually only the people inside bunkers were the ones lucky enough to survive this terrible event. You are one of the lucky few that survived in a bunker, and it is now up to you to take control of your bunker and team up with other people to explore the area and perhaps get anything of worth that could help you survive for a longer period of time. Since you weren’t the only one hiding in a bunker until it was safe to go outside, you will meet friendly and not so friendly people on your endeavor. Welcome to Year 0.

It always intrigues me when a game puts you into a time where everything went wrong and you are one of the few that survived the horrible events. I really like that type of story, but I must admit that we have seen it repeatedly over the past years. The novelty is wearing thin. Now Year 0 is made by some industry veterans so I didn’t want to judge them too quickly based on the contrived storyline, and thankfully the gameplay showcased their experience. The game is also made with the up-in-coming HTML5, something that’s typically lacked great support in the past, so seeing it used in action for one of the first times was certainly exciting. 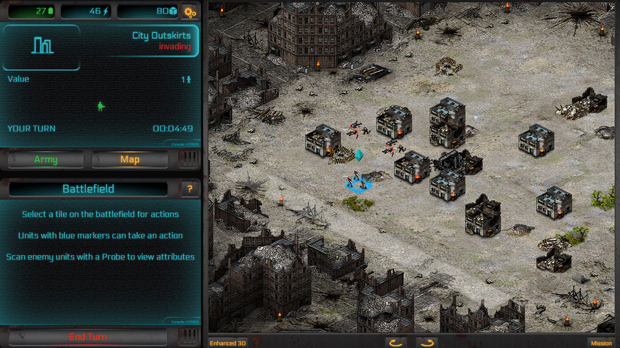 Quickly into the game you are familiarized with your objective in most of your journeys outside of the bunker. It is your job to gain control of the surrounding areas and capture harvesters that help you get more resources. With your army that could consists of different sorts of specialized people, drones, and vehicles you will drive up to the battlefield and secure the area from all enemies vying for control of the harvesters. In the first few areas you won’t find a lot of resistance, and you are safe enough to explore further into the battlefield. In the battlefield, you will select an area for your units to start in and from there you can move them forward a couple of tiles before you run out of actions and have to pass the turn to the enemy. The battlefield consists of quite a large region, so the options for where to send your troops to are quite vast. Since getting the harvester is usually the main objective, you want one unit to start as close to it as possible, and perhaps a couple of other units around it to defend your troops from all possible encounters. There are patches of trees, or buildings that you can hide your troops in. This could also mean that an enemy might be waiting in there for you so you have to be careful with every step you take. 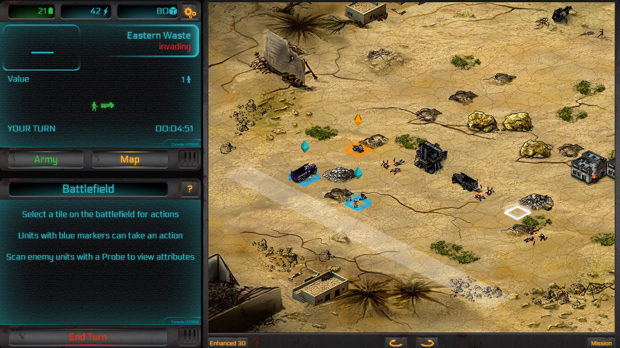 Currently there is an impressive diversity of units available in the game, and each one of these units is specialized into something different. Training or building a unit takes some time though and you do not want to lose them on the battlefield too soon since they are precious resource wise. Unfortunately training, or creating an army to check out a battlefield all takes time in the Year 0. It could take minutes or even hours to create something or go somewhere. Quite early into the game you will notice that placing even simple scavengers into your army to explore a battlefield could take a few minutes, and since I am not a big fan of waiting I’m not too sure what to think of this honestly. You can speed it up however with rechargeable power, but when you run out of this power you will have to replenish it with something in your stock. Unfortunately a lot of in game actions cost power, even moving units on the battlefield will cost you power, so the overarching connection to your entire army feels like an odd feature in my eyes. 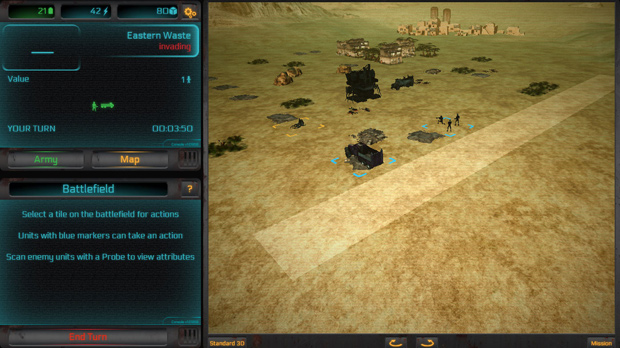 Year 0 can be played in two graphical options, the first one is in standard 3D settings, the one you will start with. I personally prefer this graphical layout the most. The other one is the enhanced 3D setting and even though this is actually 3D compared to the standard setting, I am not a big fan of the graphics. It is not the best looking setting, and compared to the standard one it isn’t really the best view to plan your strategy with. It does however show you what HTML5 is capable of, but it’s clearly one of the first attempts at it and still needs some tweaking. Since patience is needed when playing the Year 0, this isn’t really the game I was able to focus on completely when I was bored. This game really feels like a side game, something to do when you’re either extremely bored or need something to do during short breaks in your day. 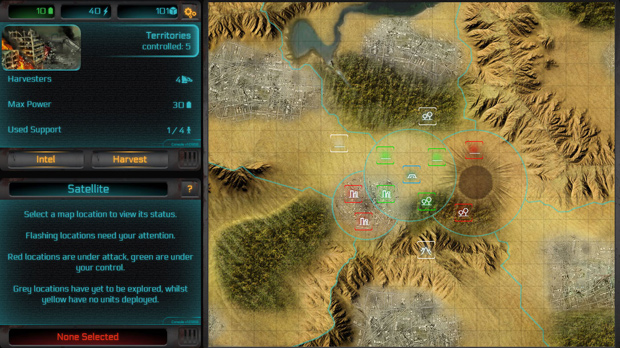 For a game that is an online strategy game, I feel like there isn’t much ‘online’ content that makes you play with or against other players. It honestly feels like a small mini game that doesn’t look anything close to what the site shows you. I honestly felt Year 0 built high expectations that fell flat, with it standing as the latest browser strategy game in an already overpopulated and uninspired genre. I’ve played plenty of these writing reviews for the site and Year 0 felt lackluster and slow compared to the average. Even the unit aspect of the game is rather slow, the part that should be exciting if anything in the game would be. If it takes 10 turns before something noteworthy happens, I expect a more satisfying payoff for my tactical decisions, and that’s just not present here.