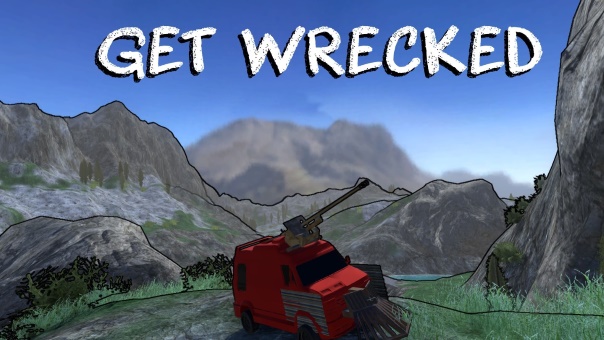 We have this morbid fascination of putting guns in our cars and blowing stuff (or in some cases, other vehicles) up for the fun of it. Developers haven’t been disappointing us, with tons of games created to scratch that itch.

Now we have this free-to-play game, Wrecked, by indie developer Corvotostudio di Amadei Marco, where you are given the opportunity to own, equip, and battle with various car models against other players in an arena meant to dish out as much destruction as possible.

Wrecked’s primary gameplay mechanic is that you will be in control of cars equipped with guns and other defensive accessories in capture-the-flag based matches.

The game doesn’t explain why this is happening, or even bother with the whole lore and backstory, and just thrusts you straight into the chaos that is car battling. Each car has its own “integrity”, Wrecked’s fancy term for HP, and you need to whittle down your opponent’s integrity to destroy their vehicle.

Winning matches in Wrecked requires you to get to 5,000 points by taking over the two capture points each map has. You and your team, a fleet of other cars controlled by players, will have to work together to capture and protect those points from the invading team and try hard to survive long enough to win.

There’s an in-place level progression system that gates when you can get weapons, equipment, and other add-ons you can place on your car. This seems to be the game’s way of preventing higher leveled people to bully newcomers while it works as a equalizer for players of the same level.

One of Wrecked’s more unique features is that the game’s customization has practical uses in-game. Normally, if car-based games provide you with any kind of “customization,” it’ll only either be color changes to cars or pre-determined upgrades to gain as you earn more points or in-game cash to get them. In Wrecked though, the amount of stuff you can put on your cars is only limited by the car’s load capacity and overall design.

You’ll have to manage all the weapons, defense attachments, and add-ons you can put on your chosen car and play along with the designs to your choosing. You can choose to follow the more practical designs, like having gatling guns on your roof and hood, or you can go for the more outrageous loadouts like putting an actual old-school cannon (that has wheels on it even) on your car as your weapon of choice.

Of course, your car’s overall performance will hinge a lot of the guns you attach. The car’s overall physics and balance determines where and what kind of weapons you put on it. Let’s say you decide to want to just dish out damage by having a cannon on your car’s hood. You can dole out significant damage to opponents, but having that cannon can easily tip your car over with uneven roads (which the games throws you a lot of) or ramming opponents.

The game’s car mechanics follows real-life physics overall. Except for the glaring inconsistencies of the loadouts, cars in Wrecked mostly move like cars in real life. So expect the old jalopy type cars move just a few notches higher of a snail, while the sturdier trucks can deal better in off-road terrain, and the sleek sports-cars can move fast but have a hard time getting heavier weapons equipped.

With that said, Battles in Wrecked can teeter between very boring or very intense. Matches I’ve gotten to play tended to follow a sequence of events. Matches would often start with players from opposing teams trying to capture the two points in the map, then as the players start feeling each other out. You get to witness or even be involved in small skirmishes between opposing teams, and then from there, depending on the aggressiveness and organization of the opponents or your team, matches can devolve into simple free-for-all car deathmatches or you get to see a more strategic team-play by PUGs who decided that working together is better for everyone.

You gain experience points when you successfully destroy an opposing car, while winning matches rewards you with in-game currency that you can use to further upgrade your car.

You can field more than one car into matches as long as you can afford to purchase and upgrade them. However, the game limits you to use your garaged cars one at a time. Each car you field has an automatic countdown timer which determines if you can use the same car after it’s destroyed. I think this is the game’s built-in balance system where the higher spec’d cars will have a longer cooling time so that players can’t just immediately field them right after it gets destroyed.

My experience with Wrecked has been surprisingly fun. Even with the dated graphics and design, the game offers a fun and quirky experience for those looking to have some car-nage in their lives. I liked that the game’s matchmaking is fast enough that you don’t have to wait long whenever you click on the matchmaking button and you can just jump right out of the game.

The game’s balancing system needs work, though. I’ve had a few tilted matches where either I was on the team that just plain decimates the opposing team, or been part of the team that’s getting decimated. Spawn camping is prevalent in the game, and while it’s not as game breaking as in other games since once people just start spawning in droves, then can just destroy the spawn camper with numbers, this can leave a bitter taste for new players especially if they experience this game in all their matches.

Wrecked also has an interesting learning curve that forces players to actually understand how the game works for lack of a tutorial mode. Though this works with Wrecked since you don’t have anything else to do aside from customizing to make your car a better car destroyer.

Even with the game’s dated and clunky control scheme, Wrecked was able to make those few hours I played a fun experience. You can enjoy the game by being a free-player or decide to throw a few monies to it and it’ll still be fun and challenging at the same time. As far as I can see, there are a few advantages Wrecked provides for paying players and as of this review, I don’t see any significant advantage premium players have except having better rewards and a few premium-locked items. So, at this point, the game isn’t pay-to-win just yet. We have to see if further updates would change this.

Wrecked has been a fun distraction from all the BR and popular titles out there right now. It has a certain charm only indie games can provide and it has a solid albeit, quirky gameplay that would be a good palate cleanser for those looking for something unique in their gaming library.