World of Tanks: Mercenaries To Receive Commander Mode in 4.10 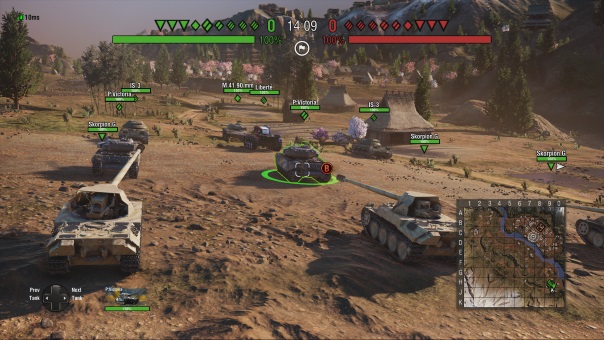 A huge update is coming to the console edition of World of Tanks, World of Tank: Mercenaries, 4.10. With it, the limited-time Commander Mode will also be around for console players. This RTS mode will be playable from May 21st until May 27th, offering a new way to approach the tank combat for everyone. On the more permanent side of things, the new “Exact Armor Value Indicator” will give tank Commanders immediate feedback into the health of their vehicle, adding new depths to tactical gameplay. Each highlighted armor plate will display the exact amount of armor it has, instead of just a range.

Additional Camouflage options are also being added for tank lines from Czechoslovakia, Italy, USSR, and Germany, letting Commanders better customize (and hide) their favorite vehicles. Players will be able to take the new collection for a spin in the adjusted Map Rotation and face off on more equal terms, thanks to new Tank Balance Changes. There are also some exciting new armor options coming to the game, in the form of the German Mauerbrecher VK 168.01 (P) and the French ELC Even 90. Available only until June 10, the Mauerbrecher sports thick armor and a powerful 128mm gun. This tank is a double threat – with heavy armor to shield your team, and a gun capable of dealing massive damage. Available only until June 11, The ELC Even 90 is a light, mobile tank with excellent fire support – perfect for scouting, or high-speed smash and grab attacks.

There is also a new edition of the War Chests, which has a variety of content from Commander’s War Chest, General’s War Chest, and the Heroes War Chest! With War Chests, players can get Gold, Consumables, Free XP, and powerful Premium tanks. Last but not least, Wargaming has some new Deals of the Week returning on May 21st, with two fan-favorite tanks. Players will get 50% off the Bear KV-122 and the Primo Victoria for one week only! With its powerful gun and improved aim time, The Bear KV-122 will become an instant favorite for the fans of Heavy tanks. The flexible Primo Victoria is a Swedish Tier VIII Medium tank unlike any other – combining superior spotting and built-in camouflage bonuses to make it incredibly flexible on the battlefield as both a scout and fire support.