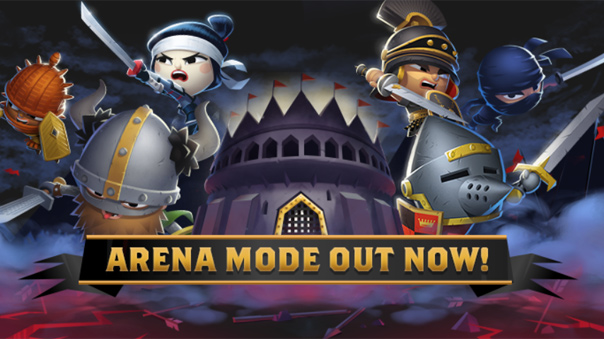 You’ve been summoned! Mind Candy™ has announced an all-new update to its hit RPG adventure title World of Warriors™ that introduces player vs. player (PvP) gameplay for the first time ever in the form of ‘Arena Mode’. World of Warriors, from the makers of the phenomenally successful Moshi Monsters™ franchise, has become an instant hit with fans and critics alike since launching late last year. Heralded by Apple as one of its “Best Games of 2014” and boasting a 4.5/5 star rating from fans on both the App Store and Google Play, World of Warriors will soon allow players to go head-to-head against others from around the world.

Arena Mode brings a new level of combat to World of Warriors by pitting players against one another for a chance to climb the ranks on the leaderboard and win prizes. Players must create the best offensive team against opposing players and ensure their warriors are destined for victory by assembling the ultimate defense to represent them when they are offline. In addition, players will be able to fight in amazing stadiums and gain the love of the crowd for extra points. Those who triumph in battle receive upgrades and the ability to customize their own stadiums.

An all-new genre and IP for Mind Candy, World of Warriors blends fighting and RPG gameplay in a pick-up-and-play experience built to appeal to both console fans and mobile gamers. Featuring an ever-expanding array of the greatest warriors in history, from Ninjas and Aztecs to Knights and Vikings, World of Warriors takes players on an epic journey across the vast Wildlands. Every warrior comes with their own incredible backstory, special moves and historical facts. Through heart-pounding battle, elemental-based strategy, a rich crafting system and the chance to compete with players across the globe, World of Warriors delivers an unforgettable battle experience in truly stunning environments.

World of Warriors is free to download from the App Store here or from Google Play here.