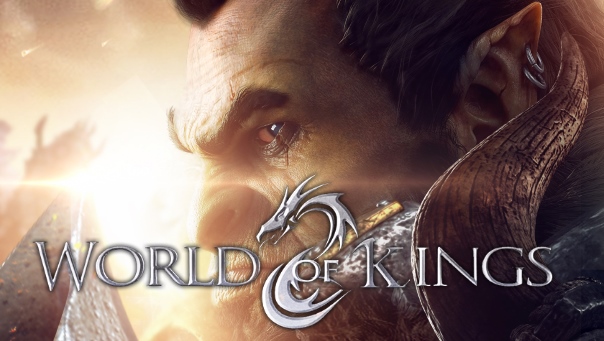 I truthfully don’t spend a whole lot of time playing mobile MMOs in my downtime. I enjoy them, but I spend a lot of time in my office, and if I’m in there, I may as well play an MMO on PC or console. But I do like them when they don’t feel like heartless cash grabs, with a vile monetization system focused on players spending more money to be the best at PVP. It’s far too prevalent in the mobile scape, and there are far more pay-to-win mobile MMOs than there are PC MMOs. I tend to go into them with a bit of skepticism, but in this instance, it was mostly misplaced. I spent the last week or so exploring Looong’s World of Kings, an MMO that debuted on May 30th, 2019.

Before I get started, there is something I feel I should address. The more time I spent with it, the more it looked very familiar. I just couldn’t place it. World of Kings looks like it borrowed quite a few assets from the early days of World of Warcraft – from the icons to the towns and castles I explored. It felt to me like some of these assets were ripped directly from the Alliance side of Vanilla/Burning Crusade/Wrath of the Lich King, but that might just be a happy coincidence. That being said, I did enjoy the art style, but it certainly felt inspired by a bigger, more popular PC MMO. This does tell me that WoW would probably do well with a mobile version, but let’s not get ahead of ourselves. Today, we’re here to focus on the mobile MMO, World of Kings.

World of Kings features fairly standard customization for hair/eyes, and Human/Orc/Dwarf/Elf race choices that still very much have the Asian MMO design style. The big draw for me, however, is the class selection. The classes do not appear to be gender locked at all, and you have nine of them to choose from. But that’s not all! Each class also has an Awakened Class, which you can begin an upgrade quest for upon reaching level 30. The classes are Warrior, Fighter, Rogue, Wizard, Mage, Dark Sage, Cleric, Paladin, and Archer. I spent more time with the Dark Sage, which had a very Warlock feel to it. Its upgraded classes are Chaos Warlock, Necromancer, and Vampire.

Jeez, this world looks so familiar.

Sadly, I did not finish my Awakened Class, despite being level 40 when the servers were wiped, but I was very close. Had I spent just a few more hours in the game, I would have got there. But that shows me it’s not really that hard to get going in the game, and its beginner experience was very good. Each feature had a tutorial quest to pick up, so you can see what you have to do to grow in power, to craft, and even make friends. I chose Dark Sage because I had a hunch it would be a very easy class to solo content with, and I wound up being right – it had a drain life power, a huge AOE slow, blood boil, but was also a healer. Getting dungeon parties was mostly a pretty easy experience.

Something that did slow me down in my time as a beginner was trying to find a party during the day. That may have just been me though. At night, queues were easy, but daytime during the Alpha was rough. There are plenty of introductory quests to the game, and simply tapping them will get you started on them. This world appears to be pretty massive, so after a few seconds of auto-movement, you have the option to tap the button with your destination to auto-travel instead of waiting forever to fly/walk/ride there. On a mobile MMO, this is more important than ever. You don’t want your battery to mostly be spent on walking fifteen miles, do you?

These raids were intense though. Healing was surprisingly easy on mobile.

The actual gameplay is very similar to your standard MMO: you pick up quests, increase your power by picking talents/improving skills when you level up, and walk/fly to your objectives, killing whatever is in your path. It doesn’t reinvent the wheel for MMO gameplay, but it still is quite enjoyable. I didn’t feel like I would have to spend ten minutes just killing two or three mobs before moving on to the next adventure. While the actual combat is pretty simple, and healing was fairly easy to do in dungeons, there are so many “things” in this game. What sorts of things though? Well, you can craft and fish, if that’s what you want to do. Every level you get talent points to put into your talent trees. Simply by exploring, you can unlock lore points and cool visuals, which also helps your growth. Working through the Main Story Quest begins the completion of your first artifact – after that’s built, you can start defeating tainted monsters for a currency. This goes directly into your Artifact for new passive traits to make you more powerful.

You can slot gems on another tab (which is very much a worthwhile endeavor). I did not see any of the standard “increase a gear slot’s power by investing blah blah blah” which was a nice change of pace. You can collect pets and mounts, which do have a very minor impact on your stats (the legendary ones I unlocked offered maybe 8 stamina at the highest). You can trade with other players, join events, guilds, tackle dungeons, and receive any number of useful sign-in bonuses. You also have Treasures that you collect, which can be opened immediately (for a small diamond cost) or you can wait for their timer to complete. You can acquire some epic gear in these, as well as gems and other useful items. These are not anything I paid for, they just accumulated as I adventured. Most of these little tabs can be hidden away, but they’ll have a red dot on them when it’s time to do something in them. The most useful of the on-screen tabs was probably the one next to my health bar.

No matter the setting, it looked very pretty, and all the character skills looked awesome.

The tab would be visible when I could do something to increase my character’s overall power, and if there was more than one thing, it would have a number next to it. It was a reminder to put on new cosmetics (for minor stat boosts), slot gems, put on equipment I may have neglected, and use my talent points. This is handy because I was just crushing through content and would occasionally forget about some of this stuff. While the story isn’t the greatest I’ve ever read, I was enjoying the interactions between characters, and the pretty cool areas in which I was doing battle. It was a fairly standard “Good vs. Evil” setting in a world that looked very similar to World of Warcraft (as did the characters, if I’m being honest), but the gear/outfit designs mostly looked unique. There was just so much to see and do in this game. I wasn’t overwhelmed by the dub, but the music was very fitting to whatever situation I was in. As I said in the beginning, it does look like a palette swap of Warcraft, and I just can’t overlook that. Perhaps it’s a tribute because they aren’t identical – just very similar.

I do want to talk monetization because that’s very important in any mobile game. Many mobile games do everything short of highjack your controls to send you to the shop, but World of Kings did not during this early access/alpha test. When I did go to the shop, almost everything in it happened to be cosmetic (costumes), mounts/pets, or other minor quality-of-life things. There were Treasure Chests you could purchase, and I imagine those likely have some kind of gear in them, but I did not get a chance to see them for myself. Judging by the chests I picked up for free, they likely have a chance for gear, but not a guarantee. The game does not tell you what can be in them, so I think if that were made more clear, I’d be happy. Sure, the odds are high you can probably pick up new gear in them, but it’s just as easy to explore the game and get them in the treasures tab. So there is a chance you can improve your power with real money, but it is a bit less predatory this way.

Talents, artifacts, powerful gear, all checked. All of the trappings of a PC MMO on PC.

Honestly? I enjoyed this MMO quite a lot, even as a mobile game. It fairly gave pretty great items for logging in, including rare mounts and costumes for repeated logins. The gameplay was simple but still enjoyable, and there were plenty of options for classes and things to see/do. The only major complaint for me is still positive, because wow does it ever feel like WoW! The visual aesthetic was eerily similar, but it was still very much an enjoyable world and game. The writing felt hokey, the character names occasionally made me snort with laughter, but the dungeons were fun. It was not terribly difficult to get stronger, but it was time-consuming – which makes sense, it is an MMO after all. I liked having all of the options for classes, I enjoyed the cosmetics, and the mounts were also very cool to see. There are tons of ways to increase in power, such as sending mercenaries out to complete tasks for you and receive rewards, opening treasures, running dungeons and more. The most ground-breaking thing it was not pushing and forcing me to buy real-money equipment chests, and that’s the best gift of all. I had fun, and will certainly go back and see how things are in the official release.