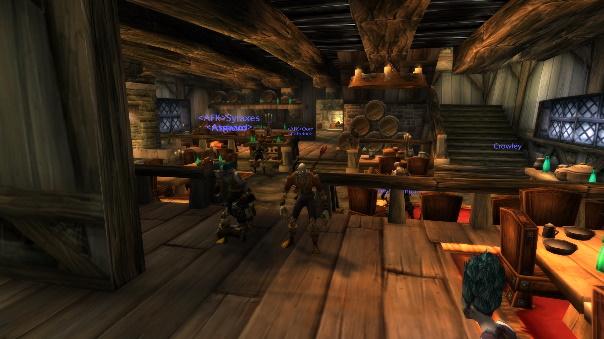 I’d like to start this morning’s editorial with a joke:

“How do you know someone played Vanilla WoW? Don’t worry, they’ll tell you.”

And I am one of those people. Over the years, we’ve seen a variety of “Vanilla WoW” servers pop up, all of which have been eradicated by Blizzard. On a personal level, I didn’t dive into these servers: Not because I hate Vanilla, but because I don’t join private servers. If it’s not an official server or a game that permits unofficial servers, I’m not joining. Now, I am presently leveling a character in Classic WoW on “Pagle”, because I was given a sub again. I admit, it’s been nice hearing about all my friends on Rexxar coming back and joining a server together, but I don’t feel up to joining a vanilla PVP server, so I wish them all luck and fun. I don’t want anyone to take this as someone just being grumpy because people are having fun; I’m not that much of a curmudgeon. With the arrival of the Classic WoW game though, I figured I might talk about some pros and cons. See? I even have some positives to say, I promise! So many people are coming together to play Classic, and that’s pretty great. On a personal level, I am not a fan of the place World of Warcraft is in right now, and haven’t been since Wrath of the Lich King. That’s another editorial for another day though. So, let’s start with the positives.

It’s Not “Current” WoW: World of Warcraft is a parody of what it used to be. The focus now is now (and has been for years) doing dailies every single day to be competitive and keep up. Neither the story nor the gameplay is interesting or inspired. So, being able to play the game again before it became. . . whatever it is now, does have some kind of appeal to it. Dailies existed in Vanilla, but they were not prevalent. They weren’t everywhere. Now, you can’t swing a dead Murloc without hitting a new, annoying daily quest.

Progression Feels Meaningful: Progression is an important thing in MMOs. You want it to feel like it matters, and boy did it in Vanilla WoW. You had to work together to complete most content, and you couldn’t simply log on, queue mindlessly for dungeons/raids, pick up easy gear and move on. My first epic in Vanilla didn’t show up until I was in my 40s/50s, and it wasn’t even for me! It was more of a Warlock Epic, but as a Mage, I took it anyway. In all my time in World of Warcraft, not once did I ever pick up a BoE Epic just off a random monster. That’s not hyperbole, that’s a fact. Completing raids and eventually getting loot felt like a real adventure, a real achievement. Granted, this system of the Raid Leader doling out loot is far from perfect. Getting a mount is very much like saving for a car: You better save that money. You can’t just swap specs anytime, and learning new skill levels also costs money. Bear this in mind.

Greater Immersion in the World: You can’t just fly everywhere now! In fact, you can’t fly at all! That is unless you take a Flight Path. You will be walking for a very, very, very long time, and there will be plenty of quests to complete in that adventure. The world feels vast, and you’ll need to work together to complete a great many tasks (as I just said). Wanted/Elite enemies? In many cases, you won’t be doing these alone. Instead, you’ll holler over General Chat, or your Guild Chat, if you have one. There is no shortage of players on all the servers right now, so bear this in mind. Don’t be afraid to ask. Because. . .

Community is Key: Sure, the same people who trolled and made life difficult in regular WoW will be here, still being assholes, still jacking mobs, ganking, and lying to people over channels. This likely will be a minority, but it will still happen. So far, the community has really come together to offer positivity and help to people who need it. After all, one important thing to remember, is we were all new once. Many players who are diving into Classic WoW are joining for their first time, and have never experienced the difficulty that comes with the Vanilla experience. It’s been pretty wholesome so far, but I am sad to say, I’m not holding my breath on that lasting.

So, now with that said, here are the negatives, from my perspective. One thing that fascinates me is that so many people these days whine and cry when a new MMO comes out with a “retro”, or old-school style game comes out. Whether it’s the graphics or gameplay, people get into a frenzy of anger over it. But as soon as World of Warcraft is doing it, suddenly that’s a bridge too far. It’s not a condemnation, just an observation.

Grind. Is. Life: World of Warcraft‘s Vanilla run is a serious time commitment. In a few hours last night, I maybe hit level 5, and that was with nothing else going on. That was also playing the first class I tried in WoW, so I had plenty of experience to go on, with this being my original Vanilla main. There’s nothing wrong with it being a grind, and in a way, it does feel rewarding to succeed in this environment. But for people that only have so much time to spare a day (kids, spouse, college, what have you), it will probably feel even slower. That can be a major turn-off for people who want to feel like they’re getting somewhere. Expect to not have bags, money, mounts, for a very long time. You really have to devote serious time to this game. Which leads me to the next part.

Raids/DKP: I’m of two minds on these raids. Sure, I love how FFXIV lets me complete raids in a very quick manner, while also offering a challenge. But I have fond memories of pushing my way through trash pulls every night, learning encounters, three to five hours an evening with whatever Guild I was in. Gearing up may feel rewarding in raids, but you have to hope and pray that your guild doesn’t have scumbags or assholes in the “doles out loot” spot. I’ve seen it happen time and again, friends get loot/win loot where people that may have needed it more did not. Sure, with 40-person raids, just about everyone can join in, but the loot amount is limited, and if DKP is used by your guild, you better show up and contribute in Every Single Raid (TM). DKP are “Dragon Kill Points”, and are distributed generally for beating bosses, and sometimes per hour you’re in a raid. Not all guilds do this, but it’s important to be aware of how hard it’s likely going to be to gear up. How do you increase your chances of gear, if you aren’t grouped with friends? You need to be “social” and kind to the people in power.

Crafting: Crafting’s still generally rubbish in my opinion, but one of the best changes to World of Warcraft in my humble opinion, was for Alchemists. Having to head down to raid/dungeon areas to craft Flasks was nightmarish and stupid. Why couldn’t we craft important flasks for raids in the capital cities? Crafting is expensive in Vanilla, as I know it, and money is certainly at a premium. With so many people in each zone, you’re going to see a lot of people 5-10 levels higher than you picking the flowers you need, or mining the nodes you are desperately after. It’s already happening, and it’s only going to get worse I imagine. World of Warcraft has one of my least-favorite crafting systems in any MMO ever and was perhaps at its worst in Vanilla.

Now, these are personal complaints. I don’t hate Classic, and I’m not saying “don’t play”. Far from it. I’m not here to tell people what to do/not to do. I do have many fond memories of the time I spent in Vanilla with friends, but many of those memories were from the people I was playing with. I think where WoW is right now is not a good place. Sure, there were good things about World of Warcraft, but it’s not the Greatest Online Game Of All Time (TM). It certainly has flaws, and being able to see the good and bad is important. That being said, I hope the people who are joining Classic WoW are having fun, and that the community comes together and has a bunch of adventures with Alliance/Horde members both new and old.

Do you have any advice for new players? Feel free to drop it below!