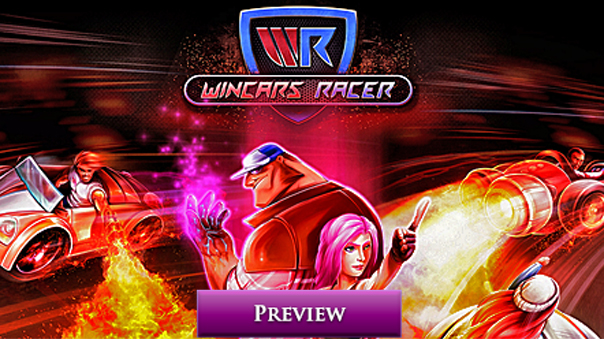 Wincars Racer is not a new game to MMOHuts – we published a first impressions article on it about a year ago. A lot has changed since that time; the game is now officially on Steam and available for early access play. The entire concept of alpha, beta, and early access releases has been getting abused lately as we see games getting added very early on and stick around in an incomplete stage for a very long time. Can you really blame the (indie) developers? They need the funding to continue development. Wincars Racer has been in development for a long time, and I feel that it is in a good enough state now to justify an early access release. Read on for my full thoughts on the game as we look at what has changed over the last year!

Since I picked up the game over a year ago, there wasn’t a question about the game being fun. It is quite enjoyable to race around with arcade driving mechanics and fun abilities all taking place on interestingly designed circuits. The underlying game mechanics have not changed drastically – the game is still recognizable as Wincars Racer. After selecting a car and driver, players race around a race track with the aim of completing all three laps first. Well, duh.

What differentiates Wincars from other racing games are the turbo, stomp, and power special abilities. Turbo and stomp are charged simply by driving around the track and can be sped up by collecting orbs scattered across the circuits. Turbo can be spent to provide a temporary speed boost – especially useful to overtake opponents with shortcuts on off road terrain. If you have accumulated enough stomp charge, it can be used to stun all nearby drivers. The game used to feature a ‘punch’ action alongside stomp allowing players to punch other drivers who dared to get too close – this is no longer the case. This is a good design decision as punches discouraged close races, it wasn’t possible to have groups of clumped up drivers. Having close games where everyone is on the edge of their seats is what makes online gaming amazing, I’m glad to see punch removed.

Every driver features different stats and special abilities. These abilities, such as Speed Wings which allows drivers to drive over any terrain without losing speed, must be charged by picking up blue orbs scattered across the map. Unlike turbo and stomp, power special does not charge over time.

Use Speed Wings to drive over any terrain at max speed

The entire idea behind this charge system was to eliminate the luck factor we have become familiar with in arcade racers. While you cannot always blame your loss on bad luck, there are times in certain games where you get hit over and over by random items that really makes you question the game’s fairness. With the entire concept of random items being removed and replaced by charge based abilities, Wincars Racer introduces a sense of strategy into the game. Players must ensure they use their abilities at the optimal moments and, with offered shortcuts eating your charges, factor whether a shortcut is worth the lost ability charge.

Coupled with unique stats from cars and drivers, this ability system adds a nice dynamic to the game. Depending on your playstyle, the other players, and the circuit, your choice of driver and car plays a huge part in your potential success or demise. Unfortunately, not all circuits and cars are available from the get go. Having to unlock circuits and cars does offer some sort of progression through the game but, in a racing game, do I really want to work to unlock more tracks and vehicles? As far as progression goes, I feel that working to improve your lap times and climbing through the rankings is enough. It is nice to see the game go the buy to play route rather than opting for free to play, which was an option before, but I am disappointed to see some circuits and cars being locked. Although these can be unlocked simply by playing, simply leaving them all unlocked or only locking skins would have been the best option.

There are A LOT of cars to unlock

Moving past this issue, the biggest complaints I had for the game from last year had to do with the user interface and audio. The UI has had a massive overhaul and is no longer reminiscent of webpages from the early days of the Internet. The horrible gradients, flames, and dull colours are gone and have been replaced by a modern UI. The UI is easy to navigate and even the HUD while racing is well done. I’m very happy with the new UI – great job DragonJam studios!

Unfortunately, my issues with the audio still exist. There has been an improvement over time but the game’s audio does not do a good job immersing you in the race. It is not necessary for driving games to have realistic audio (see Mario Kart), but a choice between cartoony and realistic needs to be made and stuck with. Choosing something in between realistic and cartoony simply results in audio that is subpar – it must either be completely cartoony or realistic, a middle ground does not work. To be fair, my choice of lowering the music volume does not help but the sound effects such as when you are stunned or jump really sound out of place.

Pick out your car and driver combo before every race

Wincars Racer still shows a good amount of potential at being a great game. Minor tweaks to improve immersion and make players continue to come back need to be made. The idea to lock circuits and cars to add some sort of progression probably had good intentions, but it does not create a system where players continuously work to unlock more content and continue playing the game. Instead, the unlock system should be restricted to just skins and more focus should be put on rewarding good gameplay and encouraging players to climb through the ranks.

I was curious to see what a friend who just recently got into gaming thought of Wincars Racer. I came in expecting it to be a game that is easy to pick up and play, I was not wrong. After spending a few seconds explaining the controls and handing him a controller (which works great now!), he was quickly able to get into the game. After a few races, he even had the general idea behind drifting down but the idea of continuously using shortcuts, turbo, stomp, and power special could still be improved. This is good to see as, while the game is easy to pick up and play, it still leaves room for improvement over time. If this is coupled with a nice competitive system, players will find it hard to stay away from the game.

I still have a lot to learn…

Of course, Wincars Racer lacks the polish found in higher budget games such as Mario Kart 8 and Sonic All-Stars Racing Transformed, but it is amazing to see what DragonJam Studios has been able to accomplish with a small team using Unity. With a little more work, specifically with improving the competitiveness in the game and better audio, the game can do well.

With its very low price tag, Wincars Racer is not something you want to miss. To be honest, if you do plan to pick it up, be sure to do so with at least one other friend, it is the kind of game where having someone to play with can be the difference between it being fun and not fun. I’m looking forward to the full release of the game, it is so close to being a great game!