It’s finally here! 6am, Wednesday, a day that will go down in MMO history as the day the hype train went full steam ahead for Carbine Studios WildStar! Why? Well let’s get the cat out of the bag right now. WildStar’s launch is now known. June 3rd in fact! And overzealous fans can pre-order the game starting March 19th with either a deluxe edition or regular offering offering a fancy Eldan Hoverboard (fully customizable mind you), an Eldan costume set, an Eldan player title… you know what this list is rather lengthy. To the bulletpoints!

Many thanks to the straight forward folks at Protostar for this fine explanation. But now the question is why would you want to pre-order in this fantastic year of major MMO breakthroughs? Well this is where things get fun. 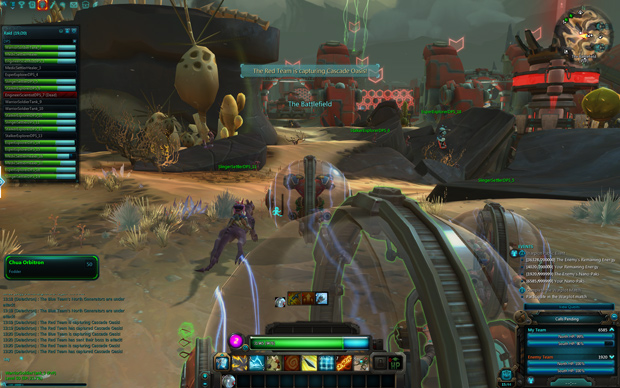 As a renowned PvP junky that has been dying to scratch the itch of organized competitive skill-based MMO combat for years, learning of WildStar’s PvP system felt like getting a rude awakening with smelling salts. Namely the alliance versus alliance 80 player PvP battles known as Warplots. But before I get into the details I’d like to address the formation of War Parties and why they are exactly what a stubborn PvP has been longing to see in a good MMORPG.

See Pkers typically aren’t the easiest people in the world to bend to a single leader. Organization and structure is nice and all, but eventually some career minded guild leader establishes one too many game restricting activities that just breaks the fun for you. Up until now though you typically had to put up with this in a open battleground type MMO in order to experience the end-game battleground contents and experience any kind of success. War Parties takes a stab at eliminating this forced system by standing as a separate entity from Guilds.

As such a War Party can consist of a massive guild of players, or be a series of smaller guilds united as one War Party, or any mix of the two options. If you’re truly anti-social (and I know some pkers are), you can even forge a War Party too small to fill the full population requirement to do battle, and have random mercenary players queue up to help you reach the total population needed. Thank you Jen Gordy and everyone on the Carbine Studios PvP team! You get me. You actually get me. 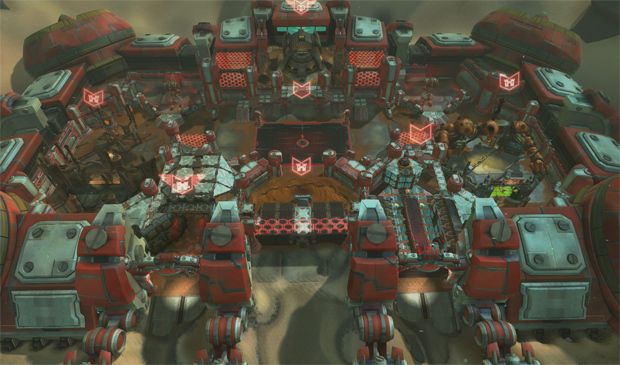 After your War Party infrastructure and admins are established, and you’ve won a couple of unorganized barbarous brawls, it’s time to get fancy with base building. See the trick to the name Warplot is in fact referring to a plot of land that functions similarly to a much expanded version of WildStar’s housing system, rather than a devious plot to enact war on other guilds. Only instead of building fun mini-games and the like, you are constructing defensive structures, guard towers, traps, and other means to ensure anyone crazy enough to invade your base during a battle will be met with a swift and brutal end.

See each match you fight unlocks a special currency only attainable here. And that currency is then utilized to build upon nodes with specific purposes in mind from trapped paths filled with radioactive poison, spikes, and cannons, to guard houses filled with cute little chobocabras that love to eat rival faces while looking incredibly cute. As matches extend, these functional add-ons can then be fed Nanopacks to unleash their full potential, such as reinforcing your spikes, repairing broken cannons, and adding health, shields, and damage buffs to your wicked pets, or even unlocking their cages to send them on the offensive.

In total plugs can be upgraded a maximum of twice during a fight, unlocking special perks depending on the plug. I’m sure this is in flux as proper testing hasn’t been done yet, but some of the more interesting nodes offer sick utility such as rocket pods that catapult players into the thick of the fields of battle, or even a holographic projector that can summon dungeon bosses members of the War Party have defeated in the past as personal protectors of their base. Only said bosses are balanced more towards facing an onslaught of dozens of players, and pack some new powers you might not expect. 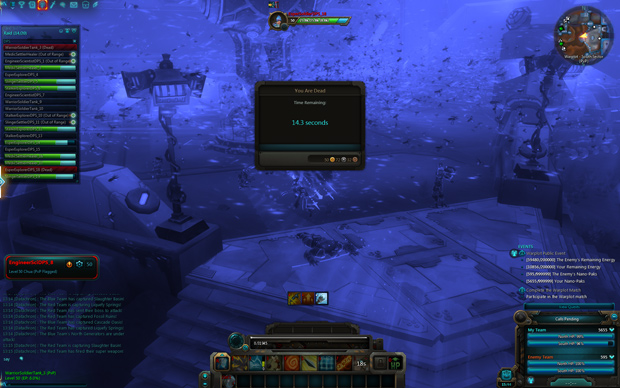 All these nodes pale in comparison to the Super Weapon though. This plug requires a massive amount of nano energy to unleash, but is sure to reign death across wherever its fire is focused. In our play session we witnessed one such Eldan Weapon fire a swarm of super locusts that completely engulfed our generator, making it nigh impossible to fight on equal terms with the assaulting troops hidden within the swarm.

Oh and to give a nod to the crafting system, a few special nodes can only be crafted by Architects. You go PvP crafters! 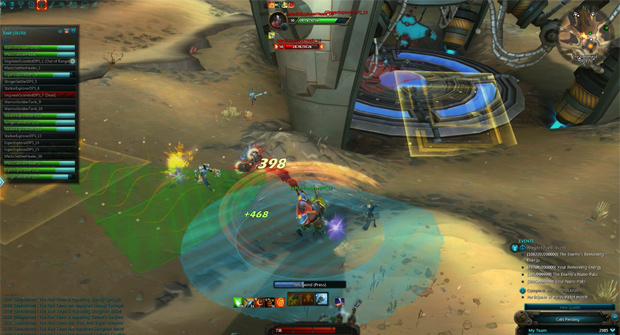 So while all of this seems cool, by now you’re probably like I was during the demonstration and pining to know what the objective of all this wonton destruction is. Well victory conditions in the Warplot can be fought in two ways.

The first and rather boring way is through attrition. See nodes have a maintenance cost (both inside matches, and in currency outside of matches) with the more powerful nodes draining a War Parties resources at a faster rate. This maintenance cost during a match is paid for with nanopacks that can be earned by capturing and controlling three major points spread equally apart in the center of the wasteland of bumpy terrain, twisted paths, and poisonous sludge that separates the Warplots from each other. The longer your side holds these points down, the longer your generators will continue functioning and feeding energy into your nodes.

As soon as your side’s energy hits zero, you’ve lost. This can be further sped up by killing off enemy players (it costs an imperceptible trickle of energy for players to revive) or breaking enemy node generators, as repairing them back to working status costs a fee of energy as well. Upgrading nodes during a match also costs energy, making the tactical decisions of your generals quite heavy. Carbine’s goal is to make both offensive assaults and balanced defensive strategies equally viable in these tests of strength and organization. 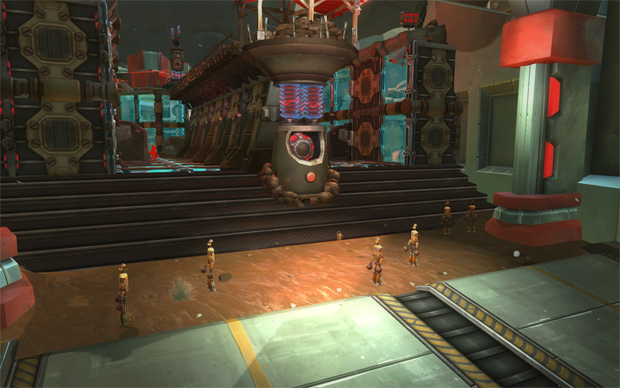 For those with less patience and an overwhelming skill advantage over their foes, the more direct generator destruction method may be preferred. If you can manage to crush your foes relentlessly while breaking through their various guard structures, you can attack their nanogenerator directly and cut their power supply off in one go. With both generators down, it’s game over. And matches can end much faster than the typical thirty to forty-five minute wars of attrition that they are intended to be.

This is a real test though as an advanced War Party can deploy a maximum of one-hundred decorations including land mines, laser barriers, rocket launchers, and more to delay your progress. Turtle bases are no joke in this game. So until you break through the outer walls, you’ll never know what dangers lay in weight for you. 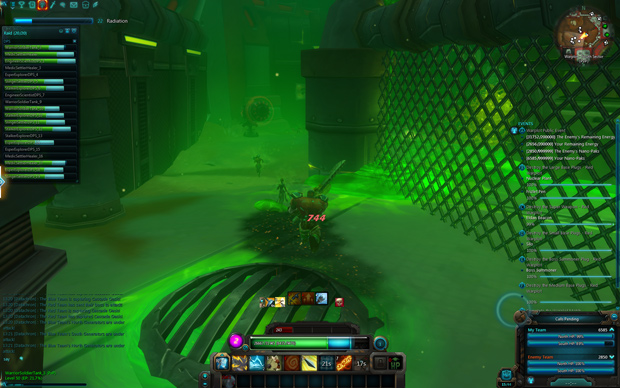 The launch state of Warplots have a huge positive and huge negative to them. As it now stands there is no direct challenge mechanism to pick a fight with a rival War Party. If you want to try to coordinate this, they’ll have to be near equal to your War Plot’s elo level, and queue up at the same time as yours. The positive is that an elo system will be in place and you’ll be facing off against roughly equal groups to your own. And that’s something you should be very glad of, as there are serious costs to facing a brutal defeat as a War Party.

The damage done to your base will linger beyond the instanced battlezone, forcing War Parties to pick up the pieces and repair their broken nodes if they want to be at full strength before their next battle. This means a full defeat will sting your coffers quite a bit, especially if you’re a more advanced War Party with a fully built out base. At the same time it adds a level of epicness to these battles as seeing a famous War Party pop up as your challenger is sure to make the accountant in all guild leaders cringe. 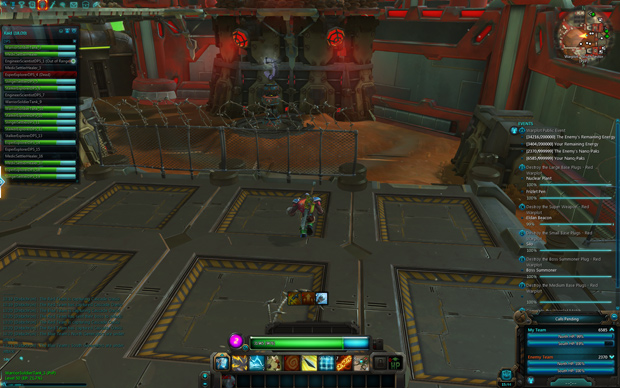 One final positive that I didn’t expect is that War Parties can face off against members of the same faction, whether it be Dominion or Exile. I’m sure the main reason for this is to lesson queue times, but the possibility of some inter-faction rivalry is always music to my ears.

The Galactic Drop is only beginning. Catch our part 2 article up shortly focused on Raiding and smaller scale PvP encounters, as well as a closer look at Housing and PvP straight from Jen Gordy over on our video page!