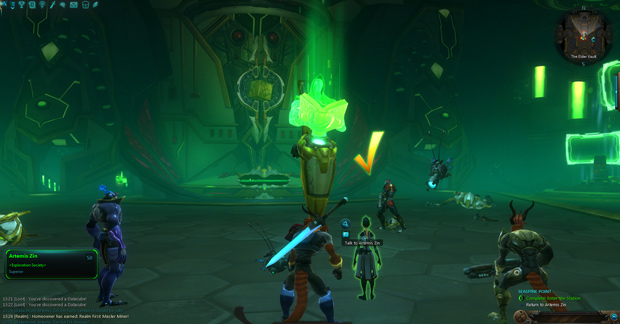 One would think after fourteen extensive DevSpeak videos in and four years of building hype, Carbine Studios would be running out of surprises to share for WildStar. Well that might be true what with the uber epic super mega Wednesday reveal (*shhhhh*) fast approaching, but something that’s easy to discount is thinking you have the full picture of the features already revealed. As such I took the opportunity this past weekend to test out three hot topics of the game in much greater detail. Namely three of the more advanced Adventures and player housing. And while housing deserves its own article entirely, let’s break down the three Adventures set to give instanced gameplay an ass kicking. 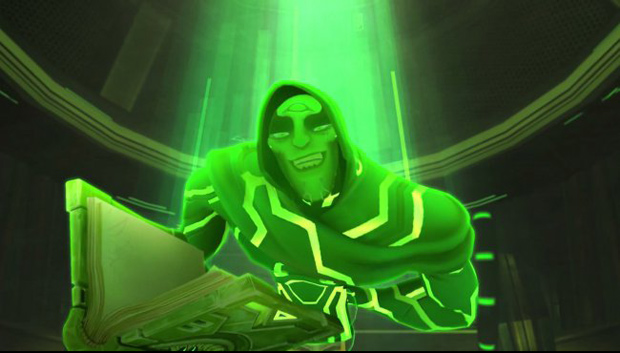 To recap quickly for those not following WildStar that closely, Adventures are instanced missions with a massive variety of potential outcomes based on the votes of the party and actions taken by the party in reaction to a series of randomized events. The outcome is an ideal leveling mechanism that stays fresh and challenging through multiple cycles of gaming. Furthermore, no amount of wiki guides or advice can fully prepare a group for what might await them on each run, meaning mindless afk grinding is out the window and active fun gameplay is back in business.

Matt Tobiason, head of the Adventures Team at Carbine Studios, offered a preview of his masterful piece pushing the tried and true “last stand” mmo scenario to the limits of what even the film industry is capable of creating. Players must defend a generator from and endless barrage of randomized military formations of varying specialties including snipers, saboteurs, shock troops, psychics and, of course, heavy artillery attempts to uproot you from your position.

Now most MMOs would settle for the old figure out a formation and party build and run the course for an hour without making a mistake to achieve victory. That’s just not enough for Wildstar though. For one, you’ve got three different directions the enemies can come at you from. For two, the enemy considers these lanes as more of guidelines than hard coded boundaries, meaning it’s more of a 180 degrees that the enemy might come at you from. Given this is a five man instance, and most challenges in Wildstar require most of the holy trinity united to stand a chance, there must be more depth to this mode. 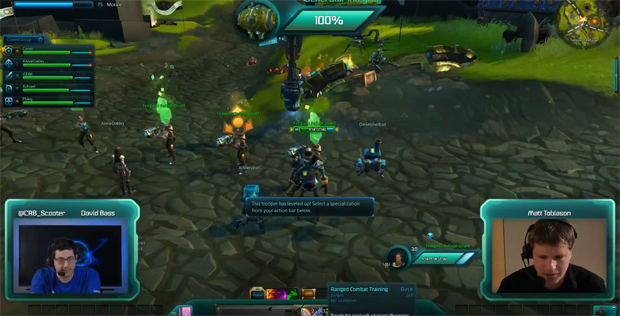 Players will be able to recruit the locals of Tempest Refuge to support the defensive effort. Not only this, they are customizable through stat boosting upgrades and even class changes, allowing you to bring AoE flamethrowers, commandos, and technicians into the equation that can be assigned to various lanes based on the intelligence of what’s coming in the next wave. This bonus fighting strength comes with a downside though as players will have to delay their deteriorating moral to keep the fighting strength of their characters and their NPC followers standing. Each time additional waves arrive, defenders fall in combat, or your shield generator (preventing the entire town from being turned to Chua cheese from air bombardment) takes damage, you’ll see your moral meter drop. On the “Elder Game” veteran version, each player death will further deteriorate this moral to make your life more difficult much more quickly.

Going from bad to worse, players will be forced to face off against one of fourteen bosses each bringing slightly different squadrons of soldiers into the fray prior. This is entirely random and the level of your moral at the time of facing each will play a massive factor in how much of a challenge they pose.

The wildest part of this adventure though may be the outcome after a certain number of Hellfire Tanks, Bunkerbusters, and Chua saboteurs bombs go off on your generator. Typical MMOs would call you a failure and end your run. WildStar says it’s time to redeem yourself by lighting up the entire town of Tempest Refuge with an aerial carpet bombing forcing your remaining survivors to make an impossible run across a narrow land bridge over bottomless cliffs to the secondary shield generator for a last stand. With less room to maneuver, nearly no back-up NPC soldiers, and moral at a blistering zero, surviving much longer is a test of ultimate synergy with your party. But it can be done, and eventually the Exile reinforcements will bombard the entire zone to save the day and call it an end of an adrenaline blistering adventure. 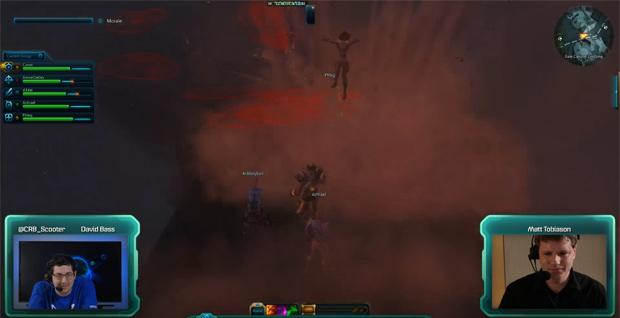 This full run can be seen now on Twitch.tv with commentary. 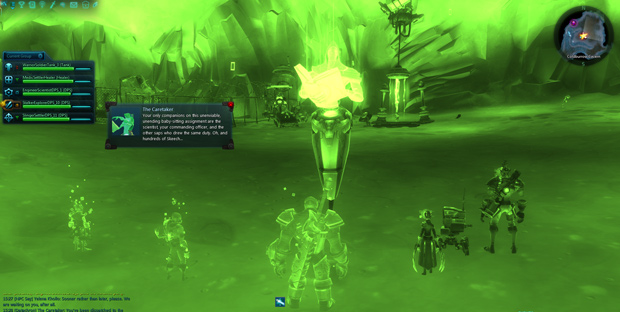 War of the Wilds

Been having a hard time getting into MMORPGs since the MOBA bug hooked into you? Carbine’s War of the Wilds adventure attempts to stick the fun of MOBAs back into the MMORPG by setting players up on a 3 lane battleground complete with control points, jungle monsters, little minions with big bug eyes, and five of the meanest trash talking enemy champions you’ve ever faced. 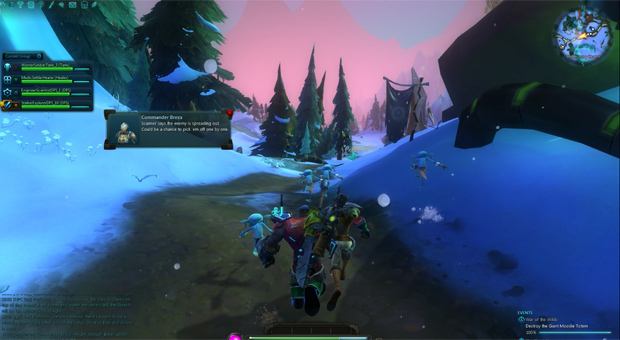 While developing a full blown MOBA complete with power-up items would be a bit much for a single instance, strong play is rewarded through totems that will offer your side (as well as the enemy’s) stronger. Scoring enemy champion kills will net you more medal points to unlock the highest rewards should you actually manage to defeat the enemy’s base. My run at this wasn’t so lucky as the champion AI stomped us out in a hurry. 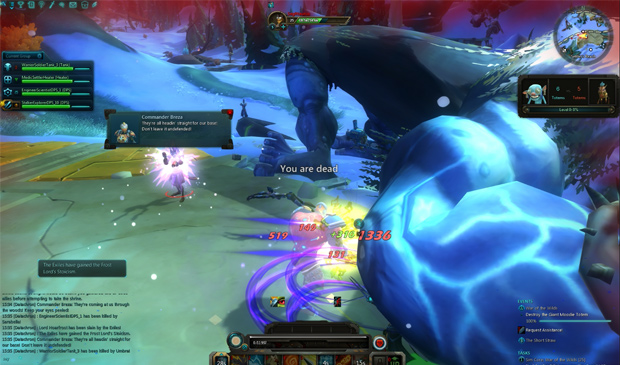 For one they seem smart enough to join up together when one is being outmatched. They’ll also contest your try at taking out the major jungle monsters, including a giant yeti that on its own typically takes at least a tank, healer, and single dps to bring down in any reasonable amount of time. 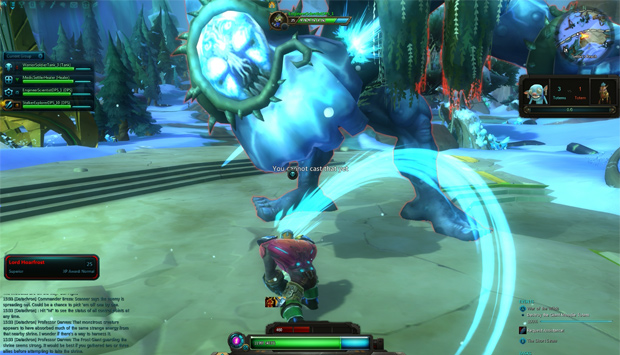 The champions themselves are also nearly impossible to take out in one on one combat, meaning keeping your minions alive is the only effective chance at actually pushing them into respawn long enough to actually take out the enemy’s defensive structures.

Perhaps my favorite part of this mode is that the enemy champions are based on the skillsets of actual WildStar classes in the game, making it feel akin to outmaneuvering similar opponents in a MOBA. Its dependency on individual skill when holding down a lane while your allies push can be quite a rush as well. While it might lack some of the voting decisions that make the other Adventures more dynamic, the actual tactics needed to succeed with different team compositions more than makes up for it to keep the replayability of this mode just as high. 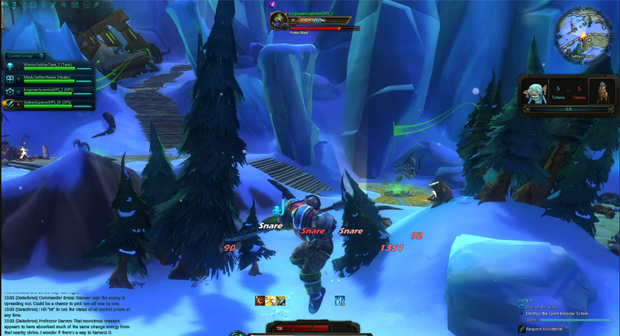 A brief preview of the beginning moments can be seen here. 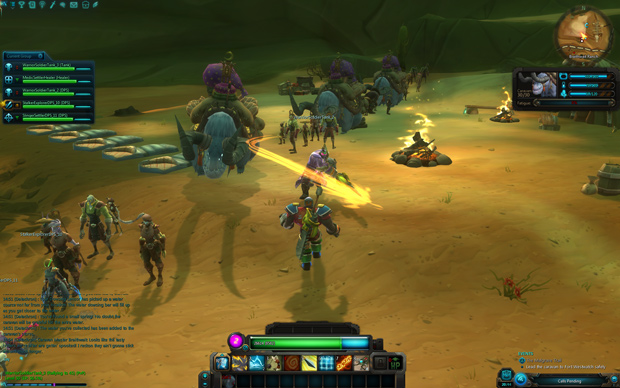 Nostalgia be damned, The Oregon Trail has nothing on the marathon adventure awaiting players as the Eldan Caretaker’s final test (at least before fully blowing his cool. More on that later this week!). After your motley crew rescues what’s left of a burnt down outpost from the Dreg, essentially Oregon Trail aliens with a taste for flesh, it’s time to escort the thirty citizens and their three elephant-like carriage animals across an entire continent with the Dreg hot on your tail. 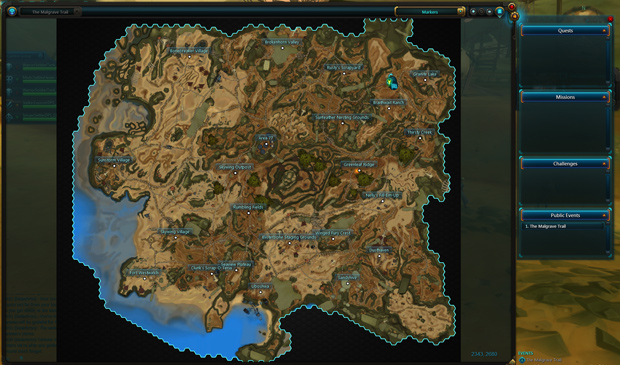 Five major paths, each with five to six planned encounters and countless random surprises from space dysentery to your entire camp randomly catching fire, there’s plenty to keep you on your toes during the fifty to ninety minute journey. However interestingly enough, the route ideal to take for your success can partially be determined by the collective paths your party chose at the start of the game.

The thirty party members of your caravan will be trained for varying specialties depending on these paths. Soldiers will arm and train travelers with rifles to offer extra firepower should your caravan come under attack. What are the chances of that happening though? Settlers train your sci-fioneers in the art of resource management, ensuring your food and water can stretch out through the direst of bad luck and longest resource lacking paths. Scientists can fortify your caravan to take a greater beating when things get dicey, specialize in curing disease quickly, and offer some unique solutions to certain trials you may come across. Finally Explorers increase the speed of the caravan’s movement as well as the efficiency of resource gathering. 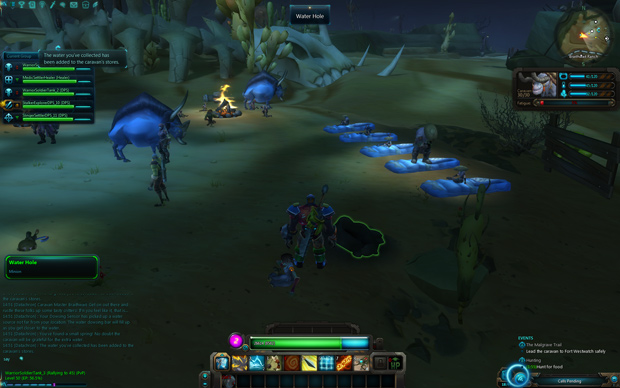 So is one path superior to the others? Can you finish with all of one path? It’s possible though Carbine has spent plenty of balancing time to reward a balanced group the easiest chance of success just due to the wide range of skills available to support the caravan. However the southern routes are intensely contested by the Dreg, meaning multiple soldiers and scientists are ideal for tackling this fast and furious route. Meanwhile the northern paths are barren mountainous deserts requiring great resource management and fast moving caravans, where only explorers and settlers need apply. 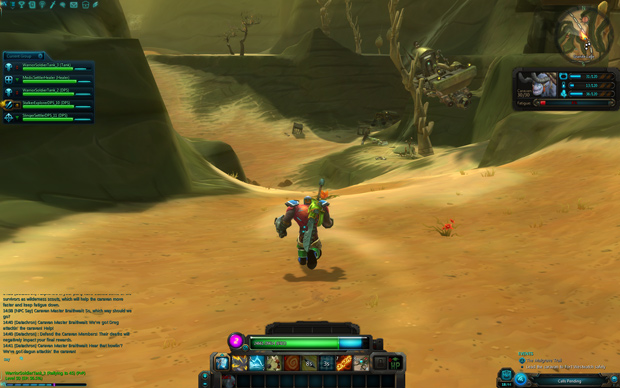 Our run consisted of two soldiers, and one of each other path, so we decided to take on a middle of the road route as we didn’t specialize in any particular strength. However we quickly learned that choices don’t always pan out how you imagine as our first stop at Granite Lake resulted in a dried out crater with our caravan hitting the end of our water supply just as we reached the middle of the dust bowl. Our soldier-centric party paid off though as the crater was immediately over-run by a Dreg ambush flooding into the hole on all sides. 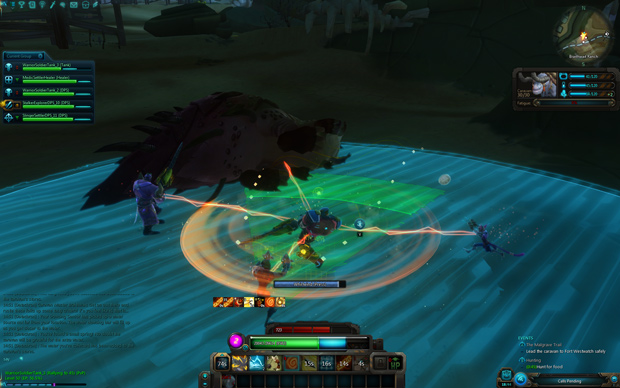 The Adventure pushed on including challenge after challenge from raiding an abandoned farm filled with man-eating plants, to solving Protostar’s supply thief riddle in exchange for extra supplies, to an outbreak of disease that made our followers turn green and a bit bubbly, to dodging actual fire flowers raining death down on our caravan in the scorching desert, to stealing eggs from oversized space chickens, to finally extinguishing random fires that threatened to burn all our supply bags and even a few of our sci-fioneers to death.

After suffering all these challenges, we were barely halfway across the continent to our destination. Unfortunately we managed to break the game, unleashing an endless wave of scorpions and Dreg on our hapless camping caravan of which I was the only survivor smart enough to just walk away from. 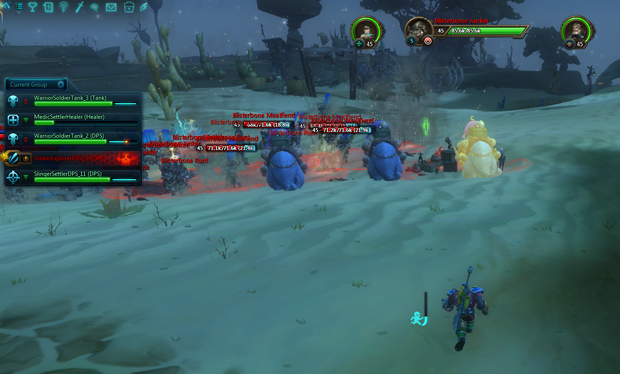 Catch some assorted highlights of our Malgrave Trail run below.

Sorry for the brief blackscreen in the middle. Part of the disease clip was corrupted.

I’m not done talking WildStar just yet. Tomorrow I’ll be going over the details of crafting and how it ties into the extensive player housing as our build up towards Wednesday’s massive reveal draw closer.