Why Warframe is Awesome 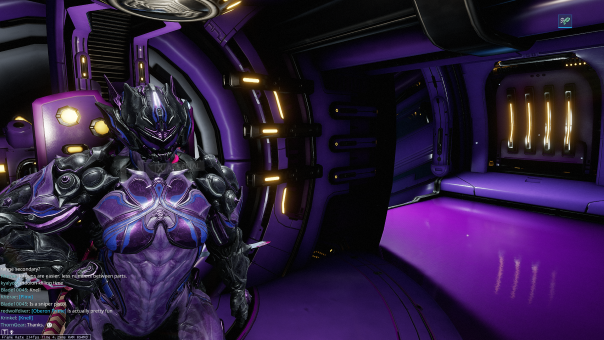 What makes Warframe so enjoyable? That’s the question I posed to myself this morning. Even at nearly 80 hours playing Warframe, I’m still “new” in Warframe. But you know what? That’s okay. There’s no rush and no push to be the best in the game. It’s a game I can enjoy at my pace, and learn something new every time I play. I still have bad habits, and still have things in the game I can get better at – but does that take away from the fun in any way? It sure doesn’t! Warframe is a free-to-play game where you basically play one of a variety of badass robotic space ninja and go on wild, intense missions with lots of parkour and explosions. Warframe is a game I want to write about more, once I know more. Warframe has been around for six years now, and that’s no mean feat in the free-to-play arena. I didn’t start off in Warframe though when it came out. It’s something I overcame, thanks to the power of the internet. So what makes this game so great? These are just my takes – see you out there, Tenno – you can find me on PC as Ragachak.

The Gameplay: Warframe’s first/third-person action gameplay is second-to-none. Each Warframe plays differently, has its own role on a squad, not to mention their own visuals/physical aesthetic. Want a high-flying parkour machine? They have you covered in so many ways. Want to be a stealth monster and assassinate? Why not try Loki? Want something fairly balanced but has awesome melee powers? Excalibur’s not a bad place to start. Want to shift between realms, with an awesome pistol and channel raw, violent void powers? Limbo/Limbo Prime is a fantastic choice. No matter how you want to play – whether it’s support or stealth, there’s an option for you. There are tons of stages with different missions, and the more you play, the more you learn about him. You can run up walls, jump and flip with a John Woo style of gunplay, slow down time and make incredible shots, and get down and dirty with awesome melee action. I don’t know of an MMO that has such intense, non-stop action.

The Community: Sure, there’s a lot of salt in general channels – that’s online games for you. But whenever I’ve had a question, needed to know something, or couldn’t figure something out, it was incredibly easy to find an answer. Whether it was on a general channel, on a livestream, or on forums, the answers were well within my reach. There are plenty of players who are more than willing to trade you parts or things you need to craft a Warframe or a weapon if you just reach out. Worst case, they’ll point you in the direction where you can farm what you need. But I’ve been very fortunate, the community in Warframe has been nothing but kind to me. There are always bad apples, but I’ve only plucked a few out of the basket.

Free-to-Play With Ethics: There are so many games with predatory lootboxes, ridiculous nonsense and other greedy practices aimed at bilking players for everything they are worth. Anything necessary in the game can be farmed without spending a dime. You CAN spend real money to buy Warframes, but you absolutely do not have to. It’s a bit more work to farm the materials, but it’s not true that bad. There are cosmetics, color packs, cosmetic ships, things of that nature to purchase, but they do not enhance your gameplay in any way. The closest thing to a loot box I’ve seen is the Mod Packs, which again – you don’t have to buy. You can buy and sell items between players, or simply trade/give stuff away to help new players. The daily login rewards are also solid, with the occasional discount on purchasing Platinum – which I do have a few friends that only spend real money on the game at that point, there’s nothing wrong with that. They have created a system that I’ve found to be fair, generous, and 100% worth time and money.

PVE: One of the things I love about Warframe is that it is almost entirely a PVE game. It’s not an Action MMO where I have to worry about players that are infinitely better than me running around, murdering me every time I take a step, especially now that there are open-world areas to explore. It’s a game that promotes teamwork instead of ganking each other all the time. People with more experience and power (in my experience) tend to help those that need it, instead of lording over them. It’s proof, if proof be needed, that you don’t have to make every game a ferocious PVP Kill-Fest, to be successful. The real end-game of Warframe isn’t the raiding, the big bosses or the challenging missions – it’s FashionFrame. It’s making your Frame look as awesome as possible. It does have PVP, but it’s not a major focus or even popular, as far as I’ve seen.