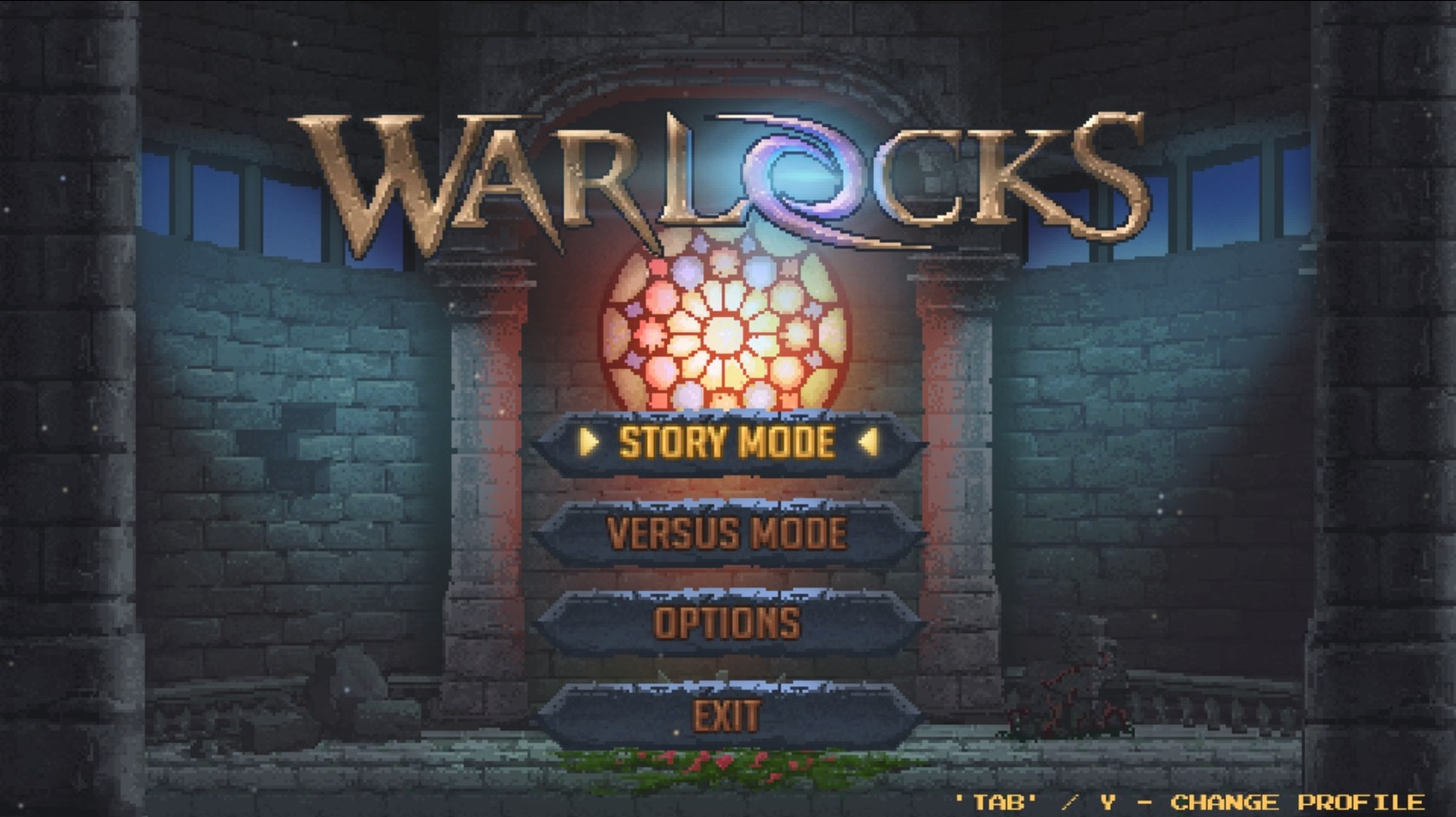 What do you get when you mix arena combat, RPG elements, magic, mayhem, and a dose of unique elements? No, not a jumbled mess of a game. You get Warlocks vs. Shadows (previously just ‘Warlocks’), developed by Frozen District and published by ONE MORE LEVEL. The game promises heavy action, challenging bosses, and an exceptional storyline. While the game is in early access on Steam, I was given a chance to try it out to see if it delivered on those promises.

Fire, Ice, and Everything Nice

Warlocks vs. Shadows gives you five characters to choose from at the start. You can choose from Rainer, who teleports around the battlefield; Jake, whose speciality is fiery destruction; Anya the Ice Mistress (guess what she does!); Borubar the Bugbear warrior, bringer of smashy destruction; and Kheera, a shamaness with a wonderfully dual personality. That’s one plus about Warlocks vs. Shadows for me: every character is unique, and wonderful to learn to play.

You’ll also unlock additional characters as you play through the stages, five more in total. It’s rare to find a game like this with ten completely unique characters.

Once you’ve selected a character, you’re taken to a tutorial stage. The training dummies here don’t fight back, have a lot of health, and are great to learn the moves. The game does a good job telling you what abilities do, but only for that character and only via description. Attacks are carried out using the Z, X, C, and V keys. Z is the auto-attack for everyone, and varies in usefulness. C is (usually) a dash move for each character, with various offensive and defensive applications. X attacks vary greatly, and the V attacks are what can be considered defining abilities. 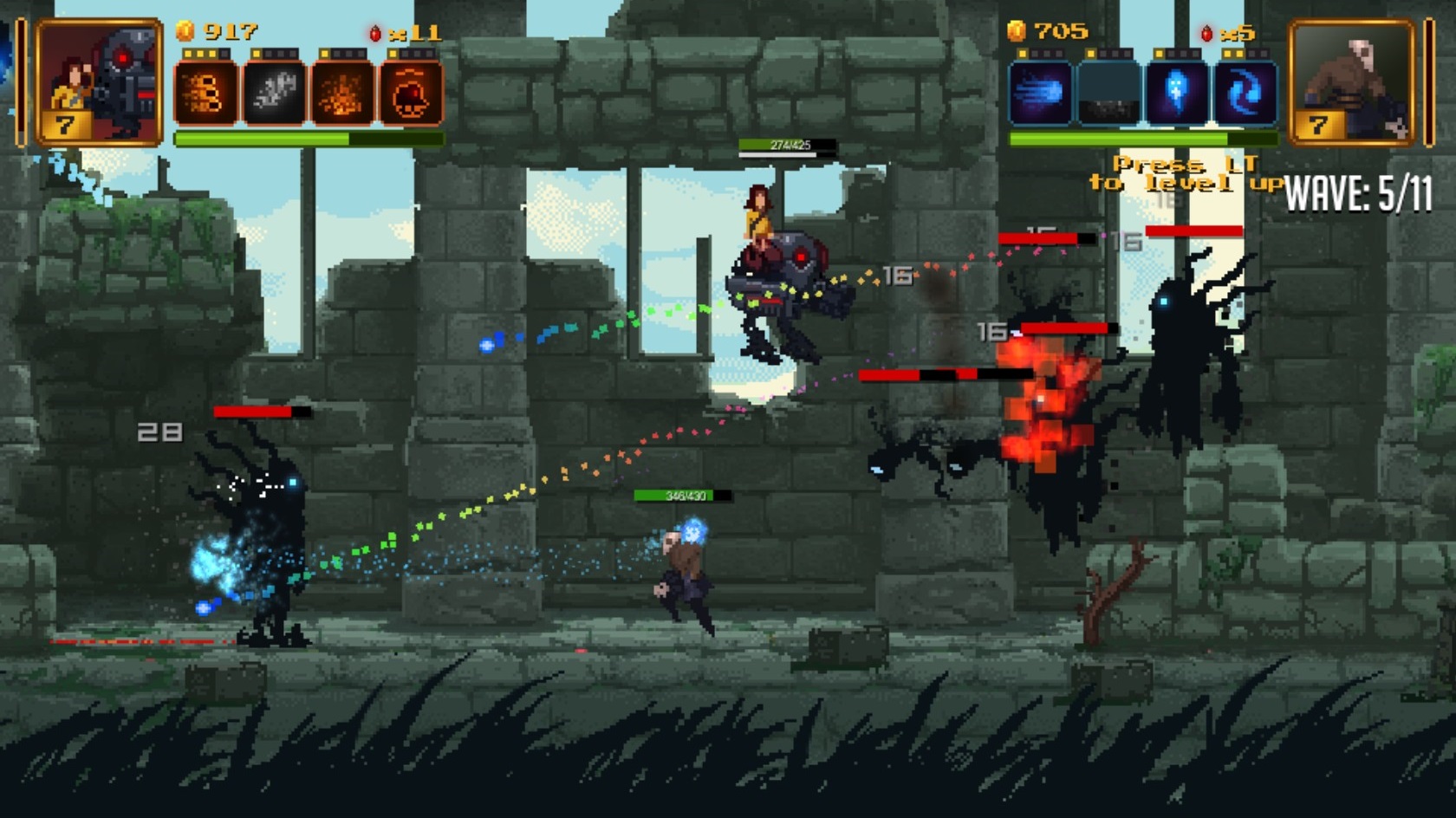 Considering you can freely switch between characters while playing, the inability to know at a glance what their abilities can do is a major problem. Even then, a lot of the skills may not be immediately obvious. For example, Jake’s V skill is held down to activate and maintain, whereas most everyone else’s V is simply activated. There is no in game information that displays this outside of that singular tutorial level (and then, only when you’re playing as Jake).

Fight For Your Right To Warlock

Combat in Warlocks vs. Shadows is very intense. You’re under almost constant attack from the shadows, and have to use all of your abilities to survive. In fact, the difficulty is remarkably refreshing, considering that you can avoid almost all damage that would come your way. Despite their simple seeming designs, every enemy type is unique, and the first world alone throws five types at you. Enemies come in waves, and each stage requires a certain number of waves to be defeated before you can advance to the next. On some stages, completing a wave spawns a treasure chest that contains powerful equipment, or a merchant that allows you to buy and sell items (more on this later).

Of course, you’re not just fighting on the ground in boring, flat arenas. There is plenty of platforming to be had in taking out some of the shadows, and you’re constantly moving, jumping, and dashing around the gorgeous areas trying to dish out the pain. It was a pleasure to see the controls were incredibly responsive for keyboard players. Playing on a wired XBox360 controller was a bit more awkward – mainly due to jump being bound to the directional pad – but still quite responsive.

Do More? Take Less? Why Not Do Both?

Enemies sometimes drop equipment, which is where a lot of the rogue-like elements come in to play. What you get is completely random, and can also come in cursed varieties. Generally speaking, you don’t want cursed items, as they cause you to take vast amounts more damage, but hey, an upgrade is an upgrade for some people! Helmets and armor share two base modifiers: armor or cooldown reduction. What these stats do is pretty self-explanatory, I hope. Boots can have movement speed increase, or jump height and armor. 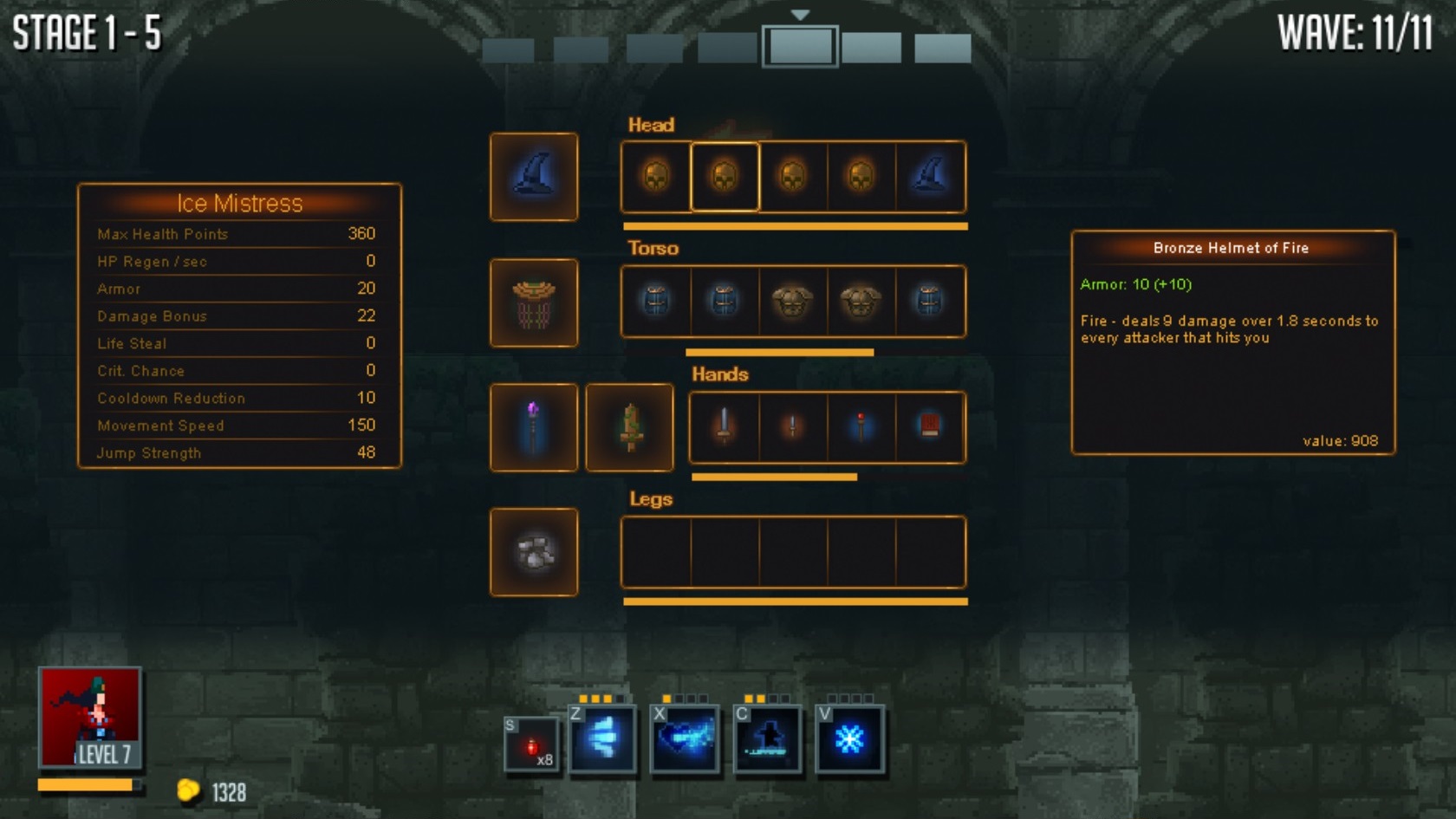 Choosing gear can be tough.

Weapons have the most options. Damage is the primary function of weapons, but they can also have critical chance, cooldown reduction, armor, and more. All pieces of equipment can also carry enchantments, which further add effects like slowing enemies, stealing life, or causing damage they inflict to be dealt back to them in return. As can be expected, different characters function best with different attributes, but most players will find what works best for them, and stick with it.

Note that while equipment is important, your characters skills are far more so. When you defeat enough enemies, you’ll level up, and can increase the power of one of your skills. The one thing I realized quickly when I changed characters to try someone new is that these skill increases carry over from character to character. This makes your choice on how to develop each warlock into a battle of focusing on a specific one, or balancing to be able to switch to another class if things are getting too hard for your currently selected character. While that may not appeal to some, I actually enjoyed that design decision.

Warlocks vs. Shadows has a lot of potential. It’s already a very solid game in its current state. It’s got great gameplay, excellent music, varied characters, and incredibly challenging and fun boss battles. It could use some polish here and there, like the aforementioned issue with skill explanations. Still, I was blown away with just how much fun I was having, despite the campaign currently being only a couple hours long. Throw local and online multiplayer on top of that, and you might start to see where Warlocks vs. Shadows starts showing even more promise. If you’re a fan of fast-paced action, rogue-like style games, and gorgeous pixel art, I’d highly recommend keeping an eye on Warlocks vs. Shadows.