Warlock Is Now Available in Marvel Contest of Champions 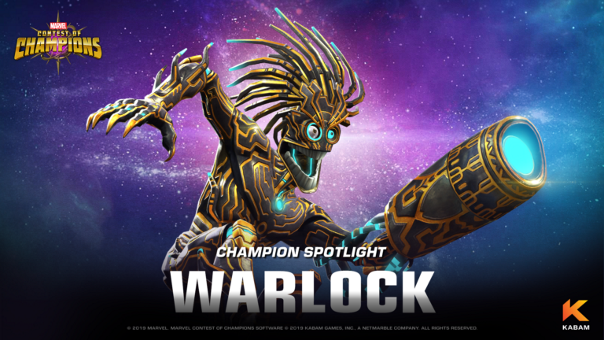 No, we don’t mean Adam Warlock, and definitely not The Magus. Self, the shapeshifting jokester, known as Warlock has joined Marvel’s Contest of Champions.

“Self is referred to as Warlock. Self is capable of many wondrous feats, including changing shape and making jokes! Transmode virus, also used to transfer lifeglow from Opponents, Self will not harm any Champion in The Contest! Hilarious falsehood! Much harm will come to any who attempt to harm Self or SelfFriends!”

Warlock builds up Infection Charges by making contact with the Opponent (either attacking or defending). Once enough Charges are built up, they convert to a full-on Techno-Organic Virus Infection which Heal Blocks the Opponent and drains their Power when they try to heal.

Warlock can then use the Infection to Power Drain, Shock, and/or Armor Break the Opponent. His Signature Ability deals damage to the Opponent whenever they are Power Drained, and his infection even works on Opponents who are immune to Debuffs.

Developer’s Note: If a hit from a Special attack removes Warlock’s Armor Up buff, that hit can also be Critical.

Developer’s Note: Charges build up from any form of contact, whether Warlock is attacking or blocking. The Infection duration is set when the 20th charge is placed. So when attacking Warlock, one way to decrease the duration is to make sure the Precision buff from Dexterity is active when you trigger the 20th charge.

Developer’s Note: The Techno-Organic Transmode Infection can stack multiple times. If an Opponent has multiple Infections, the Ability Accuracy reduction will increase (potentially past 100%), and the Power Drain triggers multiple times when the Opponent tries to heal. Also, it’s important to note that while Salve is removed by the Infection, Willpower is not.

Developer’s Note: Warlock may have figured out this move by watching another Champion in The Contest…

Developer’s Note: If the Opponent is Infected, Warlock places two Shocks on them: one on activation, and a second one on the final hit. The one triggered on activation deals half as much damage, since it lasts half as long. The Power Drain removes Infections right after the first Shock activates.

Developer’s Note: Like with the Shock, this attack places two Armor Breaks on the Opponent if they’re Infected. Armor Break isn’t as threatening as a Shock, but it can still trigger the Willpower mastery, which will cause the Opponent to drain Power if they’re Infected. This attack also has 10 contact hits, so it’s a great way to quickly build up lots of Infection Charges.

Developer’s Note: The Power Burn includes any Power the Opponent gains from being hit by the attack. But since the Power Burn is over time, the Opponent still has a chance to activate Special Attacks while their Power is draining.

Developer’s Note: Warlock can trigger this via his SP1, SP3, when Blocking a non-contact Basic Attack, and when the Opponent tries to heal. If the Power Drain/Burn is longer than 2 seconds, this ability will trigger multiple times.

Developer’s Note: This synergy applies to your whole team. So for example, if your team contained Warlock, Vision, and Medusa, Medusa would gain this Fury Buff when her immunity prevents a Poison from triggering.