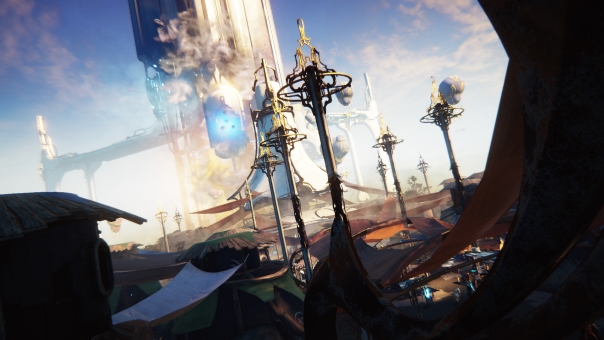 Independent game developer and publisher Digital Extremes is proud to announce from the showfloor of TennoCon 2017 (#TennoCon2017) plans to introduce Landscapes in “Plains of Eidolon,” Warframe®‘s most ambitious expansion since its 2013 debut, coming later this year.

For the first time in Warframe history, Tenno will have the freedom to explore, fight, journey and fly through the open Landscapes – Warframe’s first Open Zone – of Planet Earth in their own time, in their own way. Stepping into the rolling Plains of Eidolon, players will experience a rich landscape populated with both familiar and never-before seen creatures, enemies, a new Warframe, stunning vistas lit with a day/night cycle, and a gripping story told through interactive NPC characters who inhabit the bustling scavenger city of Cetus. In Plains of the Eidolon, players will set foot in a natural landscape with the freedom to explore it on their own terms.

With the first introduction of Landscapes in Warframe, Plains of Eidolon enables players to discover a bustling town full of NPCs with their own stories to tell, motives, quirks, and quests to offer. Cetus, a makeshift basecamp for scavengers known as Ostrons who’ve made The Bleeding Tower their home, is filled with activity and surprise. In this immense and gorgeous new landscape, players are challenged to attain a new Warframe and new weapons, engage in new story elements, and soar over the plains using Archwing – mechanical wings previously only used in space or under water. But beware — when night falls, even the invading Grineer flee the Spectral Sentients that haunt their colossal remains on the Plains of Eidolon.

“We have announced big things for Warframe at TennoCon before but nothing like this. Adding Landscapes is a huge leap that we’ve been working on for some time,” said Steve Sinclair, creative director of Warframe. “Plains of Eidolon is our first step in adding a new kind of player freedom to the game. We wanted to give our players something new, something dramatic, and that meant taking risks and evolving the game in a fresh, new direction. For veteran players, we’re always trying to give them a living, evolving game. Landscapes is a great example of how we do that. If you bounced off Warframe a while ago, this is a very different feel for the game that warrants a second look. We can’t wait to see how people react to this!”

Key features in Plains of Eidolon include:

Plains of Eidolon was revealed for the first time during the livestream event at TennoCon 2017, the second annual sold-out Warframe celebration held today in London, Ontario, Canada. The day-long convention aims to bring the game to life by connecting its incredibly loyal and active players to the devoted development team through lively guest panels, developer workshops, engaging Warframe-themed activities and on-stage demonstrations. Every TennoCon attendee will receive, for free, the first physical issue of the Warframe comic book, created in partnership with and published by Top Cow Comics, co-written by President, COO, and writer Matt Hawkins and writer Ryan Cady.