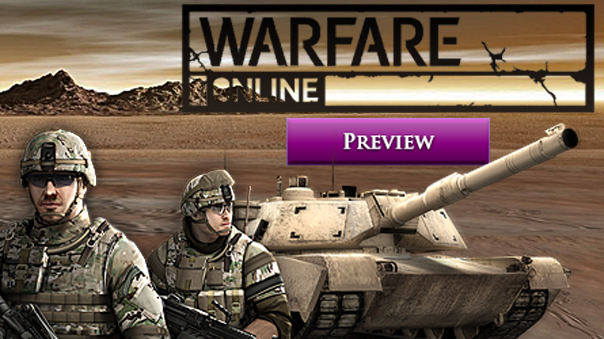 A few years ago, a lot of my time was spent playing Starcraft II. The real-time strategy genre was big and dominated the E-Sports scene. However, this has been changing over time. Real time strategy (RTS) games have slowly been consumed by MOBA/ARTS (Action RTS) games such as Dota 2 and League of Legends. While they may not be completely gone from the gaming world, we do not hear about many RTS games these days. When I was introduced to a strategy war game, I was looking forward to trying it out. Read on to learn more about Warfare Online!

The game pits you against one other player as you both work towards destroying each other’s base. Using your custom-made platoon, you deploy troops to the field as they become available. Being a simplified RTS game, the only commands available for each team of units is to advance and cancel action (leave cover). Units will continue to march forwards unless a cover spot is marked at which point they will camp there.

While this system may seem maybe too simple, it leads to action packed games that only last a few minutes. Without being able to retreat, you are forced to always be in the action until your units die. You cannot fall back and build up a large army, like many players like to do in other RTS games. The best comparison I can make for the units is that to creeps or minions from ARTS games such as Dota 2 and League of Legends. They mindlessly march towards the enemy base until they die or you order them to take cover.

Maps are made up of single lanes

Additional support assets are also available allowing you to assist your army as they march towards the enemy base. Assets such as mortar strikes and draw fire help to add in some additional complexity to the game. However, the game still maintains its accessible real time strategy nature.

After playing a few matches, I have found that there is some strategy involved but, likely due to my low level, it does not go as deep as other games. You will mostly be deciding in which order to send out your units and reacting against enemy units. It kind of feels like a game of Rock Paper Scissors where certain units are better against others. For example, I could keep sending Machine Gunners out to mow down enemy infantry but if I encounter a tank, I’m forced to send out Anti-Vehicle units.

Units can only be commanded to advance and take cover

Moving on from the gameplay, as a beta game, I was very impressed with the polish found in the game. The developers have done a great job to certain aspects of the game where even fully released games are lacking. The user interface, graphics, and sound are all very well done. I was very impressed with the sound the units make – they sound great! The controls however, can use some work. The game is very easy to pick up and play but little things like not being able to click on the cover markers to go into or leave cover are annoying – why do I have to click on the cover itself? Shouldn’t clicking on the marked cover area be good enough? Maybe I’m just being picky here though.

State of the Beta: Fun but for how long?

I enjoyed the time I spent playing Warfare Online. At first I was turned off by the simple nature of the game but quickly understood why this decision was made: the game is guaranteed to be fast and action-packed. However, there is also the drawback of having a low skill cap and quickly running out of things to do. Once I’ve spent hours upon hours on the game, what is going to make me want to come back for more?

The game feels more like a mobile game to me than a fully-fledged PC game. It’s something I can see myself playing from time to time but nothing I can commit too. The game gets very repetitive over time and there is not much calling me back after playing a few rounds. The reason I can invest thousands of hours into games such as Dota 2 and Counter Strike is that they bring out the competitive nature in all of us. They are fun for all but also feature an insanely high skill cap and unlimited possibilities. There is always something you can do and every game teaches you something new. I do not see this happening in a simplified RTS game.

You better have some anti-vehicle units for tanks

Let’s not dismiss games just because they feel like mobile games though. Look at what has happened lately with games such as Clash of Clans and Clash Royale attracting millions of players and even offering competitive E-Sports tournaments. In its current state, I do not see the same happening for Warfare Online but it is one of the better early access games I have played in a long time. This shows great potential for the game. Simple additions such as competitive modes with proper rankings and ladders can help spice up the game. The simple need to improve and reach the top can often be enough to keep players coming back for more.

The game is free to play and available on Steam; don’t take my word for it, check it out!