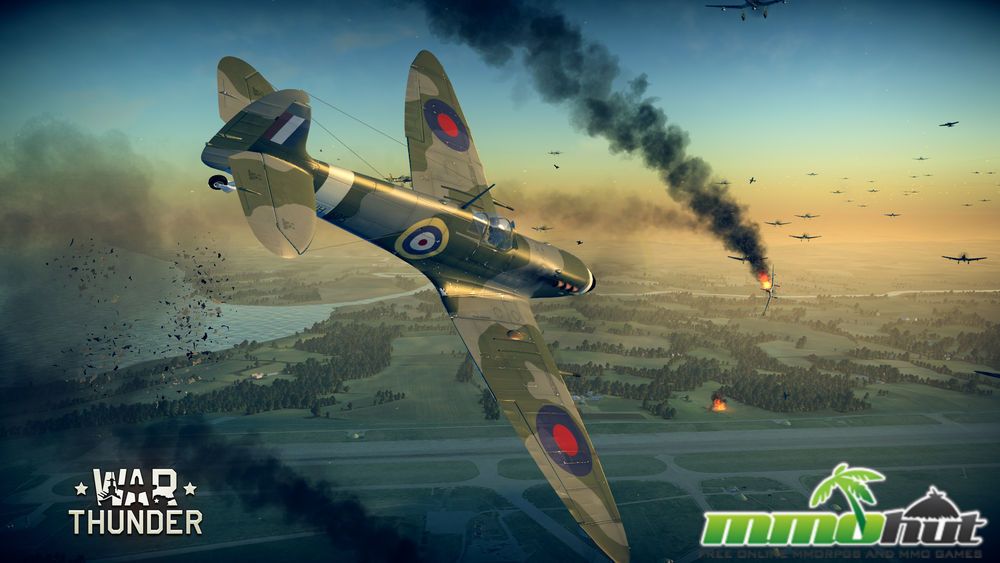 Graphics – 5/5 War Thunder did nicely on fine tuning their graphics. From my own experience, I did not see any error in graphics.

Gameplay – 4/5 For players who are looking for an MMO revolved around the idea of 3d aircraft battles, I don’t think it could get any better.

Community – 3/5 I don’t particularly find anything wrong with the community but there is conflict between individuals seeing as it’s an MMO centered at players fighting each other but there are more times of no conversation.

Features – 5/5 Seeing as War Thunder is a game based around the idea of aircrafts, I believe all grounds have been covered.

Controls– 5/5 Players also have the option of using a controller rather than keyboard and mouse. Controls are very user-friendly, just a little difficult for the first 30 minutes.

Overall –4.5/5 Very nicely made game with a potential to last a while with the right fan-base.

War Thunder is an MMO aircraft fighter game revolved around the idea of militaries from different countries. War Thunder offers a very interactive gameplay that requires a player to stay alert in order to stay alive on the battlefield. Players can fight with or against each other, and complete certain objectives while trying to stay alive.

War Thunder puts the players in a situation where the players must aim, control, dodge, and maintain balance with their aircraft in order to play well. These qualities make for a great interactive game. When flying out to the field for the first time, a player might even feel overwhelmed with everything they are pit up against. This includes ground units and enemy aircraft units. Players are given a brief report of the situation before being sent onto the field. In War Thunder, you do not have unlimited lives and are limited to the aircrafts you had set beforehand; in other words, if a player goes into battle with four aircrafts set, each aircraft’s destruction is permanent for the remainder of that battle(basically, four lives). Players are also required to aim in the enemy aircraft’s path in order to include the bullet travel time to shoot them down.

Other than that, I personally find the graphics very smooth and nicely made. War Thunder also provides a benchmark tester so players may test their computer’s performance in War Thunder. 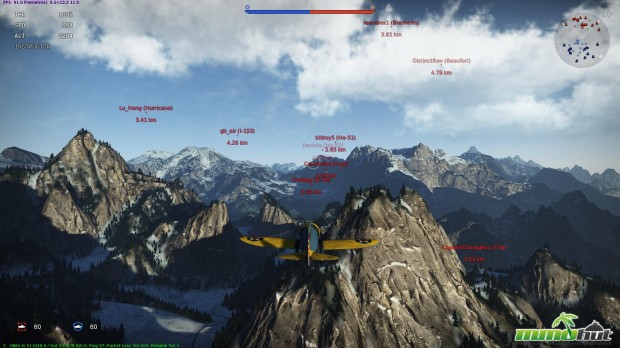 In-game screenshot of a departure into battle 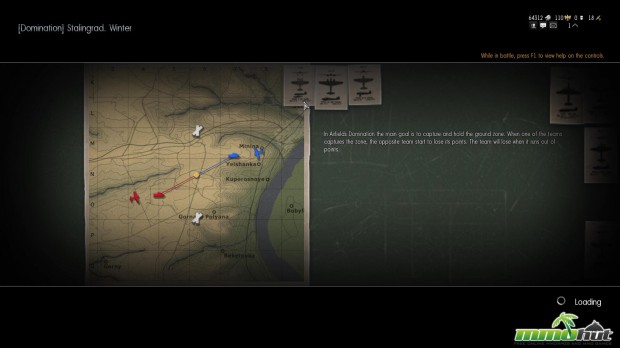 An image of the brief report given before going into battle

Players have the option of doing tutorials. Players have the choice of engaging in basics or advanced basics in the tutorials. These tutorials go in-depth about certain aircrafts and allow a player to learn about that particular aircraft’s special features. As an incentive, every tutorial offers rewards. The rewards are usually either Gold ‘eagles’ or Silver ‘lions’ which are the premium and main currencies. These tutorials will be very helpful to new players. 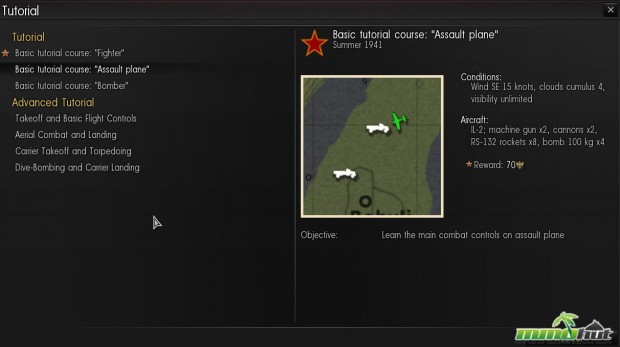 War Thunder currently offers a total of four game modes: Dynamic Campaign, Arcade Battles, Historical Battles, and Full real Battles. Arcade Battles, Historical Battles, and Full real Battles are all categorized and players fighting other players. Each mode having certain goals, players may decide to play one mode over the other to experience the game in a different manner (description example of modes can be read in images below). The Dynamic Campaign mode is a co-op mode for those who have advanced at least one rank in their selected country so they may participate in a campaigns centered on that country.

Players have the option to buy new aircrafts while they rank up. This system is referred to as “Research” on War Thunder. Each plane has its own benefits and disadvantages, and every country has their own different and unique planes that can only be obtained from ranking up that country. Some of these aircrafts can be unlocked by ranking up once, while others require more.

At the bottom of the lobby, players can select a country they want to fight for, which can also be changed at any time. Each country holds their own levels; if a player wants to increase the rank of the USA Air Force, the other air forces will be unaffected. Players will also see five icons above a selected aircraft. These icons are the following from left to right: Hangar, Test Flight, Change aircraft, View crew, and Weapons. “Hangar” allows players to view their selected aircraft without the disruption of the interface and also displays data about the selected aircraft. “Test Flight” allows a player to set and enter a free roam environment to test their selected aircraft’s performance and to, obviously, test it. “Change aircraft” is just how it sounds; a player is allowed to switch out aircrafts from purchases or research. “View crew” brings up a window where a player can add their “Crew XP Points” to their aircraft obtained from battles, or from “Accelerated Training”, which is a form of cash shop purchase. “Weapons” allows a player to add or upgrade their current aircraft’s weapons or make adjustments to the aircraft itself.

The interface displayed at the bottom of the lobby

Gold ‘eagles’ is the premium currency. Players may use these for upgrading minimal advancements to aircrafts and they may also be used to increase the experienced gain on certain aircrafts. Gold ‘eagles’ may be obtained by purchase from real money or by receiving the rewards from completing certain tutorials.

Medals are similar to achievements in other games. After accomplishing certain tasks, players are rewarded with a medal.
Number of total purchased aircrafts is also displayed along-side these selections. This icon displays the amount of aircrafts a player has in total.

War Thunder offers cash shop that’s very affordable and also not to advantageous to players who do not wish to buy. One may purchase Golden Eagles at a very affordable price. The “Shop” allows players to purchase starter packs and/or certain campaigns if a player wishes to do so (to repeat myself, a campaign is a co-op mission). 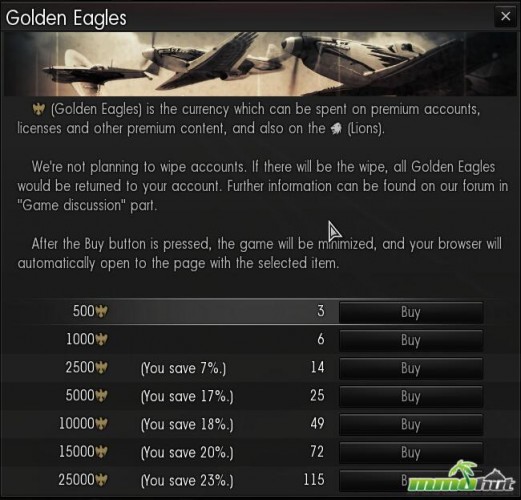 Golden Eagles offer to the amount paid on the right side 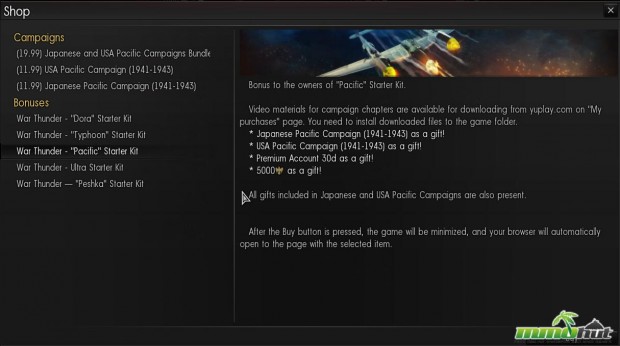 An example of prices and benefits of the items from “Shop” 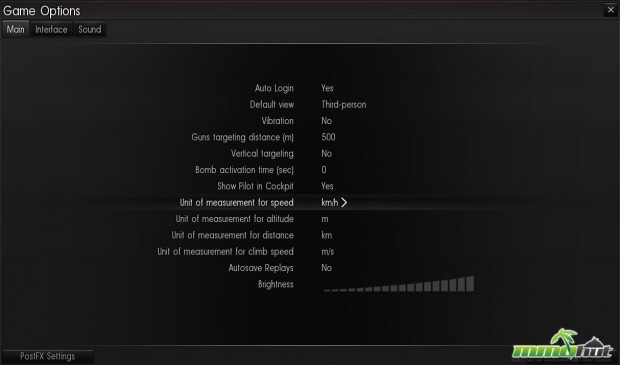 Head over to the War Thunder Game Profile for more information, screenshots, and Videos!