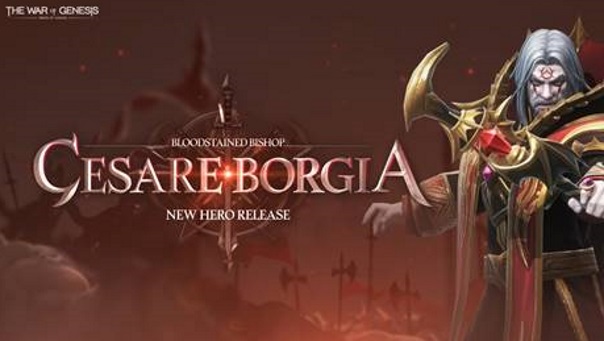 Joycity releases Cesare Borgia, The Bloodstained Bishop in The War of Genesis. He is a mighty five-star hero and was born out-of-wedlock in the Geisir Empire. Growing up corrupted, he acted as a double spy in pursuit of greater power. This update also adds a new battle, Storm Isle Battle, which will replace the existing Ruins Conquest. This system has been revamped based on player feedback, and Storm Isle Battle will begin at a fixed time on a weekly basis.

The existing ruins and the new central ruins will open at once. All 5 ruins will be up for grabs during this period but Storm Isle (also known as central ruins) will provide the most points.
Points are given based on how long a guild is able to occupy a ruin. The guild that rises with the highest score at the end of the battle will dominate Storm Isle and reap its hefty benefits for an entire week.

Adventure Mode also saw changes, and now also has new chapters to explore. Players can receive chapter rewards upon clearing all the main battles within it. Crown rewards were also added. Other updates to the game include Arena Friendly Match Mode that lets players fight their own guild members, and an option to choose the number of Battle Sprees for hunting. A new Spotlight Shop also arrived, which has incredibly discounted items.