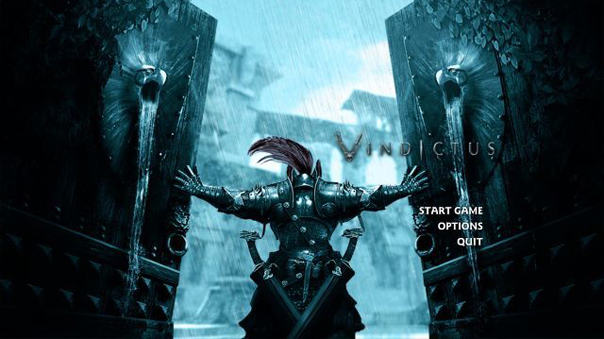 It’s been several years since Nexon America unleashed their brutal action MORPG, Vindictus, onto the F2P gaming scene, and since then, the game has received several updates and expansions, including new heroes, new dungeons and even PvP content. With the most recent update featuring Arisha the spellsword, I figured it was about time to jump back into the world of Vindictus to see if this game is just as enjoyable as it was all those years ago.

With my time spent replaying this game, it certainly was, but it would also seem that a lot of past problems are still around with it.

Vindictus uses several control schemes, including Keyboard, Keyboard + Mouse and Gamepad. The one that I prefer the most would be the Keyboard and Mouse combo, but I also tried out the gamepad control scheme using an Xbox 360 controller, and both of these options work flawless, which is necessary since Vindictus’ combat requires a lot of twitch-based movement and precise attacks in order to handle the game’s intense boss battles. Using the Keyboard + Mouse option by default, players can move around using WASD, aim their attacks with mouse look, perform primary and secondary attacks with the mouse buttons, spacebar to dodge and block, F key to perform context sensitive commands and use the number keys for various items.

While this control scheme seems very simple, things really start to open up later on as players level up, allowing them to perform tons of different attacks easily and efficiently through different primary and secondary combo patterns. The only element of the game’s control scheme that may take a bit of getting used to is with aiming of spears/chains and other throwing objectives. There’s no crosshair available when aiming your spears and other similar items, and since some boss battles will require these weapons in order to reveal the boss’ weak points, it will be a bit disorienting figuring out where the center of your target’s vulnerable points will be. 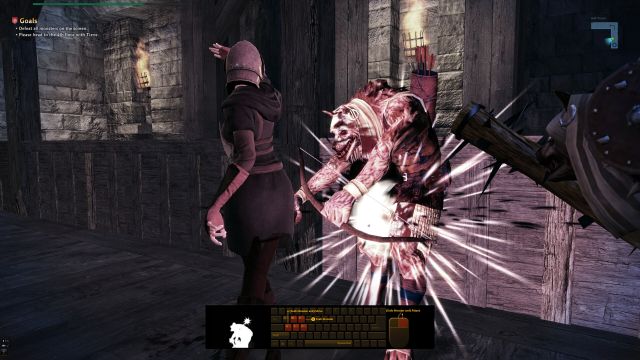 From the get-go, initial character customization offers a ton of options for hairstyles, hair colors, face styles and more…. Or at least it seems that way, at first glance. Unfortunately, most of the hair and color options are locked behind a paywall, so free players will merely be teased as they’ll be forced to look like a generic copycat of every other free player. There’s also a dyeing system that allows players to change the color of their armor and outfits to suit their preferences, but again, this is primarily locked behind a paywall. Free players can try and get a dye or two off of the marketplace, but the amount of gold it costs to buy one can be hefty at times due to the player-run economy.

In terms of skill and stat customization, the options available are pretty standard in online RPGs, such as the enchant system that allows you to use specific scrolls in order to increase stats or add status effects on player equipment, but it’s nothing too in-depth since the scroll sets are definite and enchanting doesn’t allow for true personalization of stats. Players have the option to choose a path within the story to either become a holy paladin or a dark night, which allows players to transform into a beefed up version of themselves and gain various stats bonuses, and these bonuses differ between the two transformations. Extra stats can also be applied with titles, which can be earned from quests and missions, but other than that, there isn’t much else that can be customized in terms of stats. 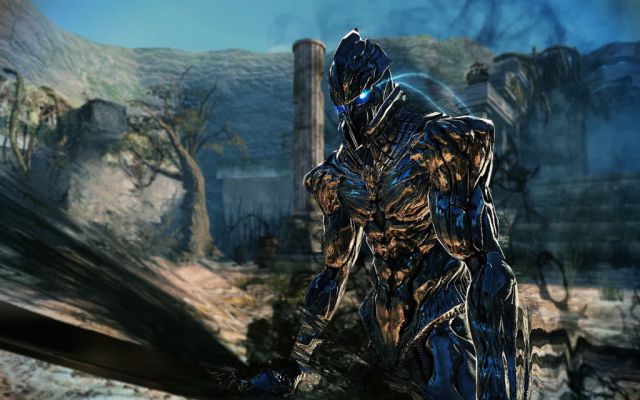 Combat is the crowning achievement that DevCat has bestowed upon Vindictus, as it takes a variety of nods from Capcom’s Monster Hunter series in terms of timing, positioning and patience. Players must hack, slash, crush, slam, bash, and blast their way through tons of different enemies. One of Vindictus’ best features is that the world can be used as a weapon: Grab enemy minions by their throats and slam them against the wall, kick them off cliffs or suplex them onto a bunch of broken glass/boxes/pots. It’s all fair game. 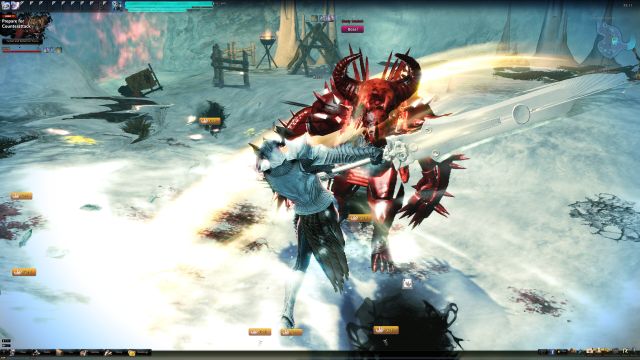 A lot of hardcore gamers may also appreciate just how brutal Vindictus can be from a challenge perspective, too. Unlike most action games where enemies spend a lot of time waiting for players to attack them before attacking themselves, bosses in Vindictus are keen on wrecking players up as soon as the battle starts. They’re quick to jump from one attack pattern to the next, and they leave very little room for error, even on the easiest settings. This is another reason why Vindictus’ combat is so satisfying, because when any player takes down any of the bosses in the game, players will feel a great sense of accomplishment, knowing that they earned that victory fair and square, because their skills helped defeated the beast. Stats and equipment in Vindictus only serve to enhance the player’s skill, rather than to bolster them. With that said, Vindictus’ continues to have one of the most satisfying combat systems in any MORPG, and perhaps any online game out there.

All the characters bring unique gameplay and combat roles to the table, such as the new spellsword wielder Arisha, who focuses on a mix between magic-based combat from close and mid-range, Hurk and Karok who are total beasts focused on crushing blows using greatswords and tolems (respectively), Lann and Vella with their fast and agile twin swords, and a handful of other heroes. Even a support character like Evie, who uses staves and magic books, can move in on enemies and do some damage. This isn’t like a typical MMORPG set where there’s a tank, DPS and healer role, so there’s almost no need for fancy party compositions. Everyone is free to play whichever hero they want, as well as free to solo more than half of the game’s content for those that are daring enough. Yes, even some early raids can be solo’d, as well (although, these would take a lot of time, a lot of patience, and often some trial and error.) 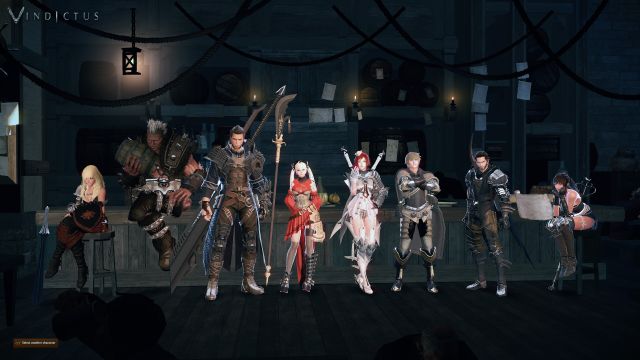 Despite all of this praise, It’s just a shame that Vindictus is just as tedious as it ever was several years ago when it comes to leveling up and earning equipment, since it also borrows one of the more negative aspects of Capcom’s Monster Hunter series when it comes to earning loot that can be used to build new weapons and such. Many equipment pieces require players to tread multiple bosses and defeat them multiple times, while dealing with the game’s painfully low drop rates, as they border along the lines of frustrating or just plain unfair for those that are looking to play casually. Of course, players can also try and buy the crafting materials they need off of the player-run marketplace, but some of the rarer ones sell for prices that are fairly high and will require some gold farming to earn, so it’s just an alternative from one tedious grind to another.

Not only that, but the game also borrows elements from its predecessor game “Mabinogi” where players can use ability points to level up their skills. These can be earned through completing battles and missions, or by having their characters rack up a limited amount of rested AP while offline. The amount of AP required to level up skills really starts to become ridiculously high in the later levels, and will require players to play constantly and on a regular basis in order to reach maximum potential, so again, players that are looking to play casually will have a hard time keeping up with dedicated players.

There’s also the PvP aspect which was included into Vindictus several updates ago, but is utterly forgettable due to the obvious gameplay imbalances between classes and imbalances with gear stats and skill levels. It can be hard to tell at times whose attacks should have priority over who’s due to frame data and latency issues, and most bouts end up as either a complete steamroll, anyway. While it may be fun for a distraction, PvP in Vindictus is clearly nothing more than that. 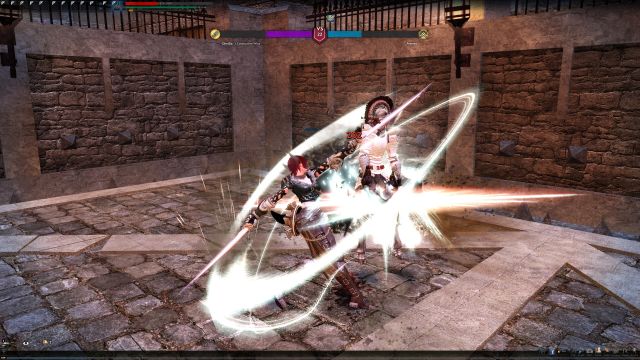 Powered by Valve’s Source Engine, the same engine used for such titles as Half Life 2, Portal 2, Team Fortress 2 and more, the visuals for Vindictus lie between “aged well” in some places and “aged poorly” in others. For instance: The character models for each and every hero are still incredibly well detailed with very realistic and uncanny facial expressions. The environmental textures, however, seem a bit muddy and have only a moderate level of quality, even with the game’s visual settings set to full. Not to mention that environments tend to look a bit blocky when compared with visuals found in most modern video games. 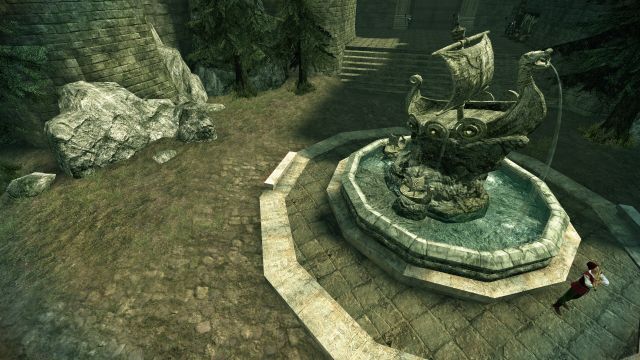 Despite all of this, the game’s presentation still holds up, thanks to the well animated movements and attacks that place emphasis on strong, impactful damage. By using subtle hit-pauses, each attack will make players feel like they’ve smacked their enemies around with the strength of a Celtic god, and it never gets old.

Along with very cinematic cutscenes that are available during certain storyline quests. Vindictus also carries a very triumphant soundtrack that hits all the right notes whenever players are traveling from town to town, or battling against giant monstrosities.

The game’s story uses a mix of traditional dialog accompanied by still images of character portraits, along with fully animated cutscenes during certain quests and missions, and this generally works out great due to the respectable storyline that brings it all together. There’s a handful of characters in Vindictus’ story that are worth liking, and a few others that are worth disliking. And while the quests in between these bits of story are your typical MMORPG fare, most players will likely be able to look past all of that just to see what happens next.

Finding active and dependable players around the player’s current level is very important in order to get through some of the game’s challenges. But sadly, due to the game’s age, most of the community is holed up at the endgame zones. For anyone that’s new to the game, it may be a bit difficult to find a full open quest session (which are called “boats” in Vindictus) unless you manage to pull some of your own friends along for the ride, or manage to find a guild to join. During my weeks playing the game on a new low level character, I was logged in during the game’s primetime hours and I could only find a handful of ships to play on, all of which did not have any more than two to three players on them.

The early leveling experience will be a dreadful one for anyone that’s solely looking for pick up groups. But on the bright side, most of the players that newcomers may run into are friendly and helpful, due to the game’s cooperative nature. 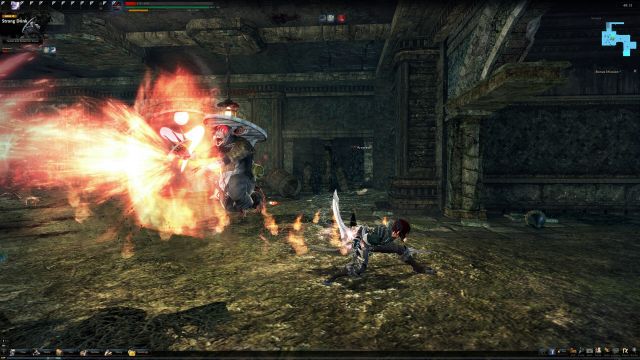 
Vindictus is still an excellent action MORPG when it comes right down to it, despite some quirks here and there, and remains as one of my old favorites. While the gameplay is still solid, and the visuals are decent, it will ultimately come down to the tediousness of quests and missions that will determine whether or not Vindictus is a game for you. I suspect many hardcore gamers will not mind the grind if the gameplay is engaging enough, but everyone else may be turned off.