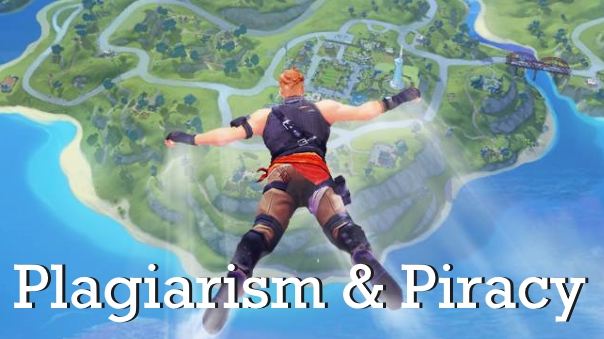 In this internet-powered era, it’s likely that most people under the age of 30 have enjoyed pirated entertainment. Although a survey published in 2017 indicated 32% of people watched pirated media content (TV and movies), an increased globalization of media – and access to it – means that younger adults have desire for, and access to, some form of pirated media content. Foreign TV shows, cable TV shows, movies, and manga are all readily accessed with some quick sleuthing.

Even a site dedicated to reporting on the latest cracked titles will cover itself legally.

Video games, of course, aren’t exempt from this. Emulators have long been a modern access point for older or more obscure games, as well as more modern or popular titles. To combat that, some companies have attempted to release their own emulator systems, like the NES Classic, or simply offer older games through digital means, like PlayStation’s classics library. Emulation isn’t the only concern, though: code crackers are constantly at work with a goal of offering any modern game for free. A variety of websites thrive on offering these cracked titles for free, and while some offer extensive legal disclaimers to avoid lawsuits (as piracy is illegal), plenty of others persist – not to mention private communities that offer direct download links to avoid detection.

In the old days, game publishers sought to prevent piracy by requiring players to enter in specific words from the game manual (which, at the time, was not so easy to replicate and redistribute). Now, many use DRM or “digital rights management,” software methods that aim to prevent hackers from making the game available without a purchase or physical copy. Despite their best efforts, however, these DRM methods are still broken. For example, Denuvo, one of the most popular DRM methods, was cracked within two weeks of its 5.0 release. 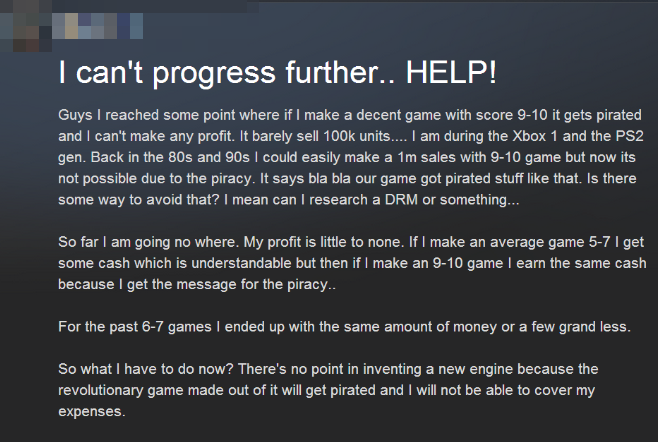 This player failed to realize the irony of their plight.

Nothing speaks to the impact of piracy in the video games industry, and creative ways of dealing with it, than Greenheart Games’ clever anti-piracy ploy in Game Dev Tycoon. The developer released their own pirated version of the game which eventually prevented progress in an ironic twist: the pirating players could not fight the financial hit from in-game piracy. Unfortunately, one day after launch, the developer also found than less than 7% of players were playing a legitimate, purchased copy of the game. While each publisher’s situation is different, the case study reveals just how much impact piracy can have on a developer.

How much financial impact does this have on the industry? A widely circulated report in 2014 indicated that the industry was taking $74 billion losses a year due to piracy. Meanwhile, a 2017 study in the EU found that piracy increased actual game sales. The truth is there are multiple factors influencing how piracy impacts the industry, including the size of the developer’s studio, the platforms a game is available on, even the game’s quality and review scores. Pirates have different reasons for their actions, after all. Some pirate simply because they don’t care and will take a game free if they can find it. Many others, though, pirate games due to poverty, access, or even curiosity (“try before you buy”). Judging a game’s potential sales is more than calculating the price of unsold pirated copies; how many players would also purchase the game if they had the means makes an impact. Unsold games also impact local economies, who lose tax revenue on the sales.

Piracy isn’t the only problem, however. There’s also the issue of plagiarism, where games are made to intentionally clone, mimic, or profit off more well known games. The mobile gaming market in particular has been riddled with this problem for years. For example, search “Pokemon” on your favorite app store, and after the legitimately licensed titles like Pokemon Go and Magikarp Jump, you’ll start seeing games that were clearly not approved by Nintendo: World of Pixelmon Craft, pokemon of legend, Pixelmonster Go, and a host of coloring apps and mimics that can’t be kept from cluttering the store. As Steam’s marketplace has expanded, desktop users are also seeing a larger influx of these types of games.

Here’s a great, recent example of one title that doesn’t hide its “inspiration” in the slightest: Fortcraft by NetEase Games. Even those of us who have never played Fortnite can instantly recognize that this isn’t simply another battle royale game: it’s doing its best to copy Fortnite in every way possible, especially visually.

Plagiarism can be confusing in the video game market. You can’t copyright ideas, which is why Playerunknown’s Battlegrounds can’t simply lay a lawsuit against every battle royale game or mode being made, even though many argue it is the progenitor of all battle royale games. Yet PUBG has filed a lawsuit against the mobile game Rules of Survival due to substantial similarities. The difference is in how much is similar: an idea, itself, can be similar, but how much a game is similar in terms of assets, gameplay, and game features can make a huge difference between “inspired by” and “blatant rip-off.”

Greed is a common cause behind most plagiarized games. Plagiarists see an opportunity to bank off of the popularity of games and their related search terms. Some mimic the original as closely as possible in order to offer a feasible “alternative” for seeking gamers, while others rely on the popularity of assets, names, or characters (such as the Pokemon example above) in order to garner revenue from players who either don’t realize the game is unauthorized, or simply are such fans they don’t care. 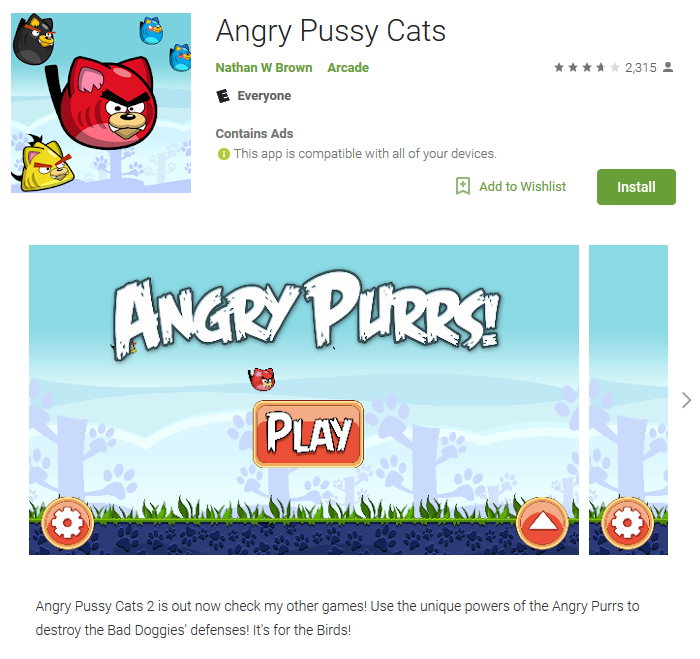 This attempt at plagiarism even uses the word birds in the description to appear when searching Angry Birds.

Where piracy may not necessarily equate to a lost sale, plagiarism often does. These “knock off” games often are sold at a price, or have microtransactions in them, that players use to enjoy the game. This is tangible money lost to developers who have simply copied the work of others without the hard work, creation, and innovation it takes to make an original game. It causes unfair competition, especially as a game has to combat a cheaper version of itself to survive.

So what can you do?

Of course, there are many other questions and considerations with these issues. We’d love to hear from you, so please comment below and share your thoughts!