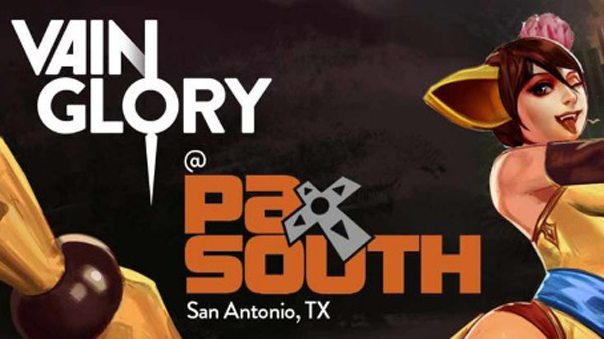 PAX South was packed full of good games, but one title really dominated my thoughts the entire weekend: Vainglory. The hook was strong enough in my gut that I went home trying to plan a way to buy an iPhone. Considering I generally don’t like MOBAs and would never consider shelling out the cash for an Apple product ever again, that’s one deep hook. I guess that goes to show you how “super evil” Vainglory’s developer is.

I met with Super Evil Megacorp at the Twitch booth on Saturday morning, and under the noise of both a live Twitch broadcast and a shoutcast from Grey Box’s booth, I got my first taste of Vainglory’s gameplay with a simple on-floor demo. I won’t go through the basics of gameplay (after all, the game is released on iPhone, and our coverage has already been posted), so I’ll skip ahead to the good part: playtesting Ardan, Vainglory’s newest hero debuted at PAX South. 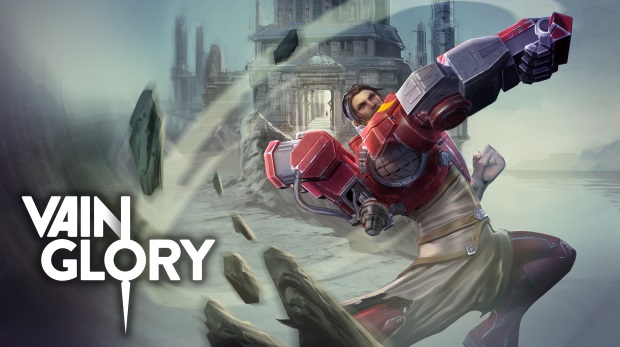 Ardan is a flexible support character with a unique vengeance resource mechanic. This fills up as he takes damage and enables his abilities to be used. His first ability, Vanguard, sends him charging to an allied unit to grant them a short duration shield (this shield can also be used on Ardan himself, but without the benefit of the gap closer.) It also grants vengeance to Ardan if the target takes damage while it is active. Blood for Blood, his second ability, is a heavy duty fist strike that does a critical attack.

Ardan’s ultimate ability, Gauntlet, is a real game changer though: Ardan throws down his gauntlet to place a static arena down on the field. While allies can move freely in and out of this arena, enemies cannot. Any who do try will be stunned and take crystal damage – there are no mechanics that let a hero sneak out. This makes it a powerful trap for keeping enemies from fleeing and for forcing a team fight (or as some are calling it already, cagefight). One caveat to the arena, however, is that if Ardan leaves it, the arena will disappear.

Currently SEMC is suggesting that the hero (as he was in the build we played) was probably too powerful and needed to be toned down a bit. Expect more tweaking before he’s finally released, but it’s likely that his addition will introduce some changes in the meta game. 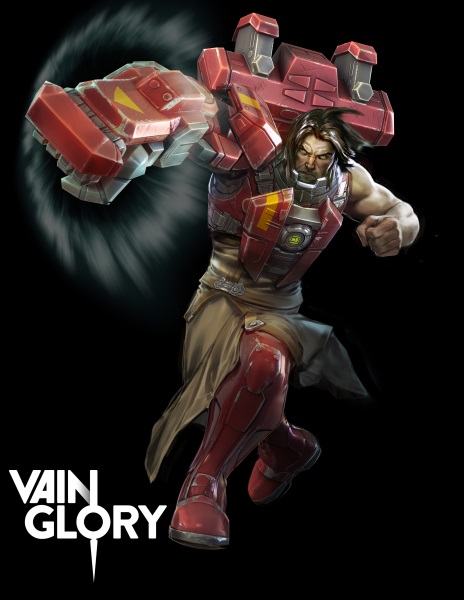 After this interactive session, I went back into the Twitch VIP lounge with the team (including Bo Daly, Stephan Sherman, and Kristian Segerstrale) to find enough quiet to sit and discuss Vainglory a little more in depth. While I’m sure many players would have wanted to drill them about upcoming patches and tweaks (Ardan? Joule? Spectator mode? Android?), I spared them the repeat questions from the forums and instead asked about the game’s design and future.

Vainglory’s business model is somewhat traditional, and yet deceptively not so. For a MOBA player, the idea of a free to play game where heroes must be purchased is fairly common. For the mobile market, however, it’s almost unheard of. Mobile games have a tendency to gate content through energy mechanics, but SEMC knows that Vainglory doesn’t need that to succeed. The entire game is always completely free to play without limitations, other than buying heroes. And while Vainglory does use the free hero rotation system, players can test all heroes out in practice mode for free, making it easier to decide on heroes to purchase. The best thing, though, is that rather than shoving a new hero out every few weeks, Vainglory aims to offer new heroes only as they enhance the game and offer something unique, and only with extensive balance testing.

What’s more unique, though, is Vainglory’s game design. On the surface, it might simply seem like a neutered DOTA-style map, including only one lane and one jungle. Building Vainglory, their lead designer explains, was anything but a simple cut-and-paste job. Rather than simply cutting off most of a traditional map and assuming it would work, the game’s design was built from scratch, a process that involved digging deep into the core essence of a MOBA and the feelings it invoked during play. This allowed Super Evil Megacorp to focus on a core 3v3 experience designed with mobile in mind.

The end result is a clean, simple design that feels true to its genre, despite its map size and average match time. Vainglory also breaks new ground in terms of making the competitive team game both more accessible and more human. Want to play a few matches with friends and work on your strategy? No need to rely on a heavy duty headset or cart your computer to another location – all you need is your phone or tablet. Because of the simple and direct interface, players can sit around a table at a coffee shop while playing a match. That kind of human interaction is something that has been relatively foreign to mobile gaming, which has stuck with gameplay that is relatively anti-social and isolated.

Speaking of team play, I also asked about the future of eSports with Vainglory, a title that is on a platform not terribly conducive to streaming. Surprisingly, this hasn’t been in SEMC’s focus. Instead, they explain, they had intended to simply hone the gameplay experience until a time that the game felt ready to consider adding the infrastructure, like spectator mode, for eSports. However, the community surprised the team by rallying around structured competitive play. Vainglory’s community has jumped ahead of the curve and begun to organize its own tournaments, even going so far as to host 2v2 matches where the third player on each side acts as a spectator rather than participating. SEMC is going to have to readjust their roadmaps to meet player demands, but they are pleased to see an eSport scene develop so quickly and organically among their playerbase.

I’m sure that Vainglory is headed for long term success with their innovative approach that aims to make MOBAs more accessible without making them more casual. If you’re itching to try out the game, you can find it on the iOS App Store now, or wait, like me, for some time in the future when it hits Android. If you’re already playing and just waiting for the newest hero, Ardan will be coming soon after further balance testing and tweaks. Until then, fight on!