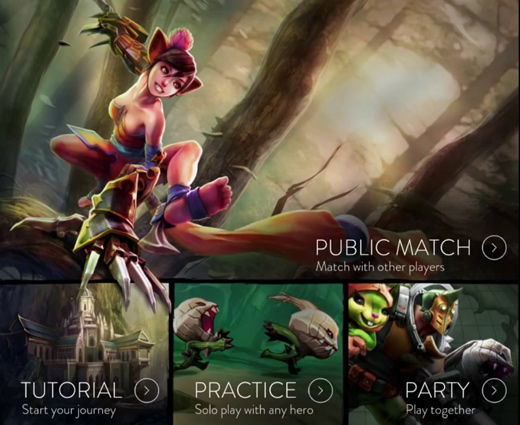 Mobile games are usually reserved for casual gaming. Ask anyone who has a tablet or a pad what games he or she has installed and most likely you’d see farming games, simulation games, simple puzzles, the tired TCG ones or simple rhythm games. Point is, they’re usually games that are meant to kill off short amounts of time, like when you’re commuting.

Typically the design philosophy is one of creating fluff that’s easy to pick up and just as forgetable to drop out of. Sure addiction sets in for a time if its done well enough, but more than likely mobile gamers are moving onto the next shiny every few weeks. That’s why you usually get a mixed bag reaction when someone takes these things seriously. As such the announcement that a company with big name devs putting together a full-blown MOBA for mobile devices stands out from the crowd like a lighthouse on a dark night. 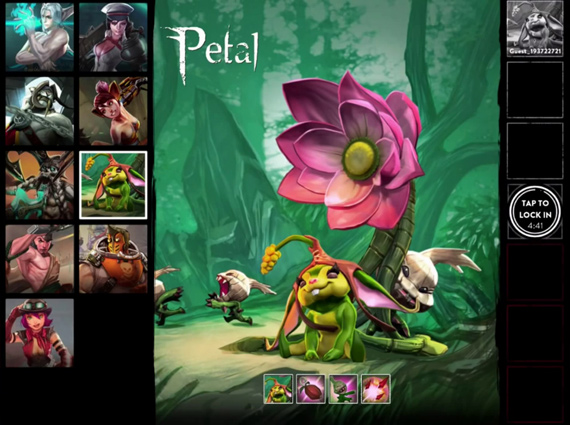 Super Evil Megacorp, a new app developer featuring former staff members from Riot, Rockstar, and Playfish, today launched an iOS-exclusive MOBA called Vainglory to the western market. Like most real-time strategy arena games, Vainglory attempts to capture the popularity of games like DOTA and League of Legends without the experiencing getting too dumbed down by its platform. Luckily being based in the Philippines, I had access to the game a few weeks early and prepared some thoughts. 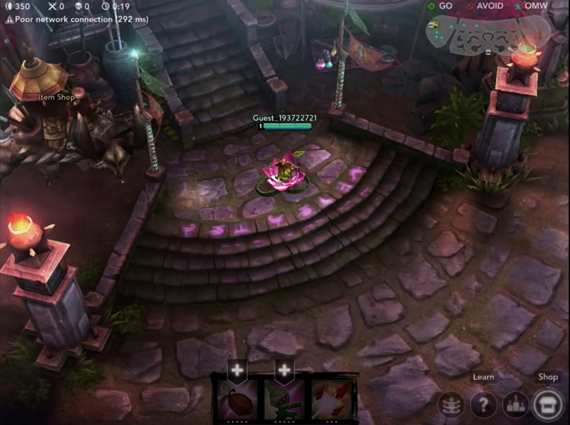 The player controls one of many heroes that level up in battle, unlocking skills as they go. The goal is to suppress the opposing team by building up power and destroying their base. Honestly, once you’ve seen a MOBA, you’ll know them all.

They’re all point and click and most playable characters are mostly reskins and roulette combinations of skills and playstyles featured in other titles. There will be occasional innovations in terms of skills and abilities depending on how the character was designed and how it makes use of the game engine, but like I said, once you’ve played a MOBA, you’ve played them all.

It’s all just a matter of picking one where a character skin and skillset suits your fancy. Not that there’s anything wrong with that though. The simplicity and universality of MOBAs have made them into a sort of language every e-gamer speaks.

Since there hardly is a learning curve when picking the game up, anyone with previous experience in the genre will feel right at home playing at a competitive level. That may be Super Evil Megacorp’s initiative to bring it into the mobile gaming scene. 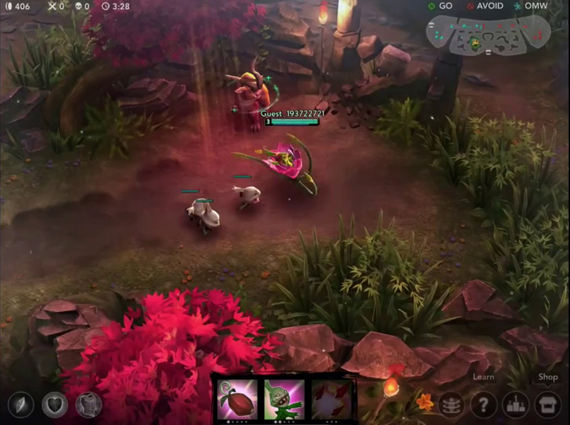 True, it may be a gamble. Like I said, mobile devices were mainly for casual play – games that you can easily pick up and drop then pick up again whenever it’s convenient for you. But after World of Tanks Blitz showed hardcore lengthy session arena fighters had their place in the market, anything is possible. Especially with how common tablet ownership has become.

Of course the trade off is MOBAs take far more development and consistent balance updates and champion additions to maintain a healthy playerbase. So now that Vainglory has all of our attentions the question is, can they hold it more than a month? This can be done by making sure Vainglory looks good, plays well, and keeps a cash shop that doesn’t strangle the fun factor out of the game. 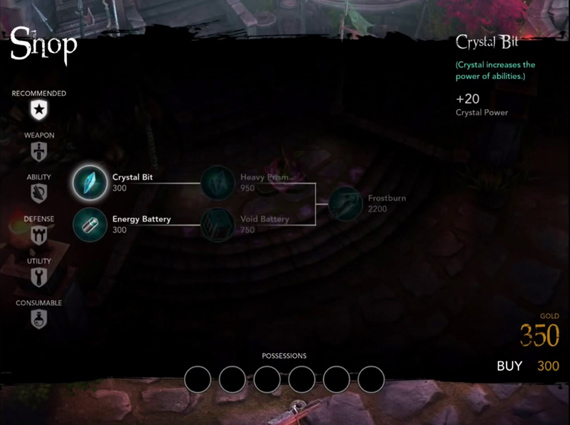 Shockingly, I’m personally impressed by what I just downloaded. Hot damn, Vainglory looks good. Controls have been simplified to fit the touch-screen setup, but it still plays like your typical MOBA.

It’s a maximum 3 on 3 arena brawler where you click around your map, moving along lanes with your creeps, farming gold, buying and upgrading your items and equipment to eventually destroy towers, and the like.

You get three unique character skills plus one ultimate. It’s designed to be one of those “I’m not really in the mood to go full gamer mode on the PC, but I wanna play so let me just pick up my tablet” sort of things. Yet the attention to detail and quality of the game design doesn’t at all match what you’d expect on your tablet.

Though there are just a handful of playable characters available, all of them are unique in design and their skillsets are well thought of, even compared to other MOBAs. The character models, the minions, and the map are fully rendered and beautifully detailed. You can even zoom in the camera as the action is going on to fully appreciate it.

The experience is immersive. Even the AI is on the level to give newbies to the genre a run for their money. The music is masterfully composed. Guess that pedigree of people from well-known companies banding together isn’t all for show. 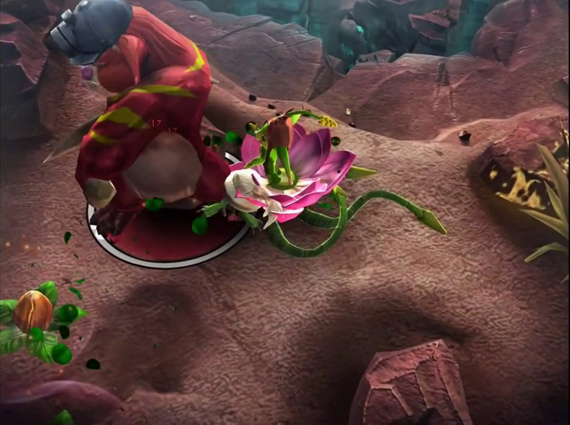 Some Kinks in the System

But, impressive as it is, it isn’t without fault. Vainglory, as a MOBA first and foremost, is an online game that requires a stable connection for interaction with other players.

One serious make or break point they managed to get right with my experience in the Southeast Asian beta phase was that low ping didn’t seem to impact the game with lag time or delays. Your ping has to be truly abysmally horrid to impact your gameplay. But even if you were to experience technically difficulties, you just have to hope your team is on their game enough to notice since communication isn’t present. This makes sense since you are playing on a tablet and everything has to be simplified for already mentioned purposes. But in a game of team coordination, it’s something more hardcore players are going to miss.

Also, the maps are considerably smaller, only having one or two lanes, which really lessens the tension of the game as everything can be seen at once. Also, while it didn’t bother me much, I know others familiar with the genre are going to complain about having the camera auto-locked on their character all the time. You may drag the camera around to scout other places in the map, but as soon as you let go of the screen, it automatically returns focus to your character.

Another serious issue comes into play when experiencing Vainglory on phones with smaller screens. It’s safe to safe a tiny screen plus meaty gamer fingers squashing everything is going to result in a bad time as you try to peer between the cracks to figure out what is going on. 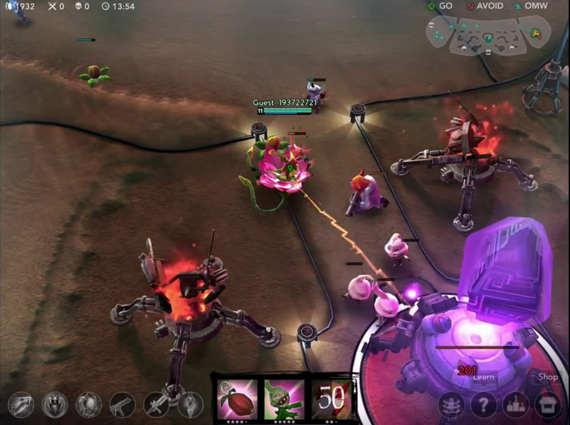 Other than that, Vainglory is a real solid experience. Though there have been complaints, Vainglory is still in development and it’s not really fair to nip it in the bud for early issues.

Honestly its ability to provide a solid experience on a touch screen platform is one of the most innovative elements brought to the genre in a long time. Though it may take a while for MOBA players to really get comfortable with the game due to a lack of familiar features, I feel that it’s a good port to ease into the genre. And, hey, isn’t that what mobile gaming is about anyway? Casual gaming? So, kudos to Super Evil Megacorp. They still have a lot of work ahead of them for Vainglory, but the quality of it all says they’re serious about this one. It’s definitely a must-try.