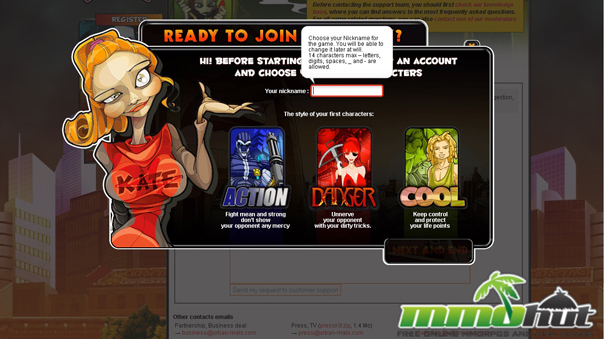 Trading card games have been part of my gaming experience for almost as long as video games themselves. I’m sure many fellow gamers grew up playing the likes of Magic: The Gathering, Pokemon, and Yu-Gi-Oh! so the genre is no stranger to the average MMO player. The trouble with the TCG model, however, has always been high costs and a steep learning curve. Urban Rivals does away with both by offering an easy to learn trading card game for free right on your web browser. To learn how Urban Rivals ‘stacks’ up, read on!

The first thing that I noticed about Urban Rivals was the comic book like art style. The main site uses bright colors and the kind of drawing you see in western super hero cartoons. The site is easy to navigate and is currently available in eight European languages. Account creation is simple, players chose a nickname which doubles as their username and the style of their first character. The three options include ‘Cool’, ‘Action’, and ‘Danger’ with each representing a different gameplay strategy. Action players prefer heavy hitting cards while Cool players rely on ‘control’ cards to lock down opponents. Your initial choice here isn’t very important since it won’t be until much later that you’ll be able to truly customize your deck in a meaningful way. After account registration, new players are given 8 random cards which make up a complete deck. 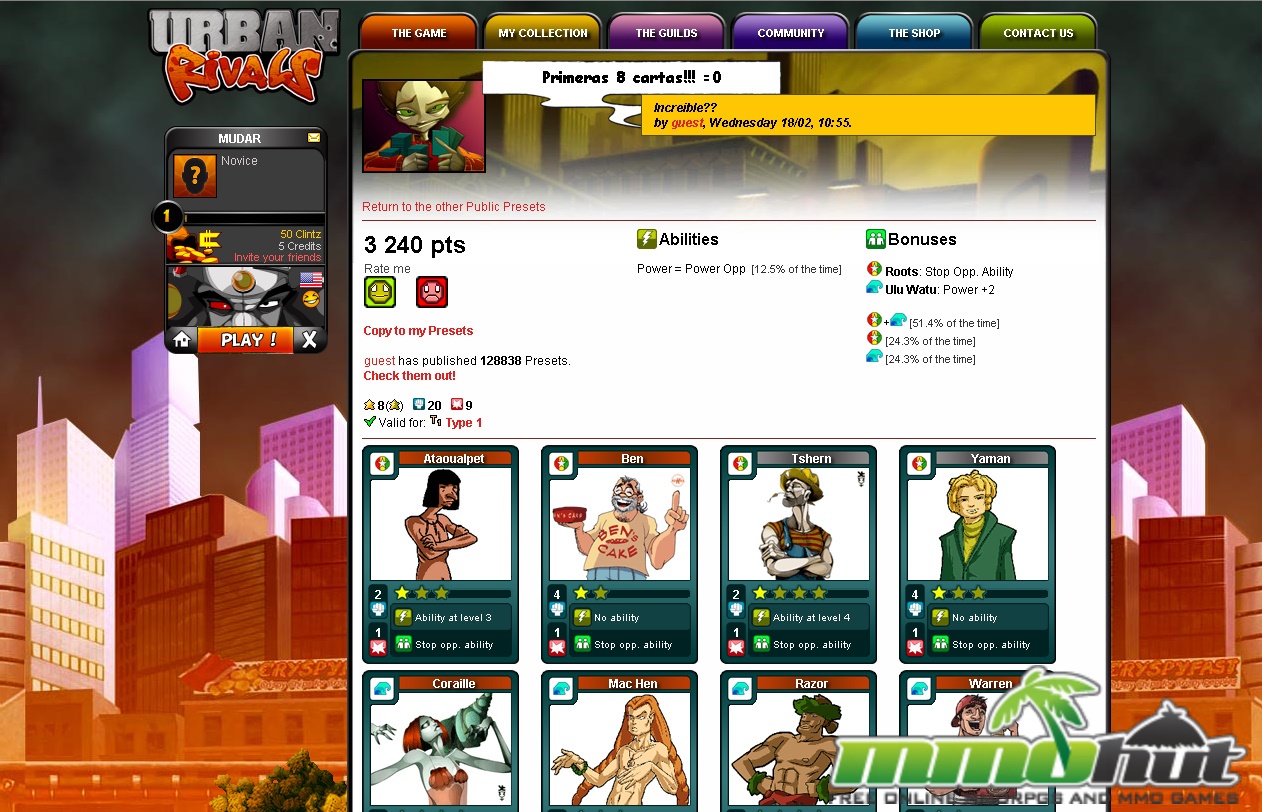 Urban Rivals is an incredibly easy game to learn, especially considering its a TCG. While other trading card games have rule books as thick as short novels and can take 30 minutes or more per match, Urban Rivals focuses on short, simple match ups. The game does a good job explaining itself, new players are shown a 3 minute long video that explains the rules and are given the option to read a step-by-step instruction manual in comic book form before they join their first match. At the start of each match, players are randomly assigned 4 cards from their 8 card decks. Each card represents a different ‘character’ which belongs to one of the many clans in Urban Rivals. New cards and clans are introduced to the game regularly which means there is an ever expanding list of cards to collect and play with. Character cards have several attributes including power and damage. Matches are played out in a series of 4 rounds with players taking turns selecting which of their four characters will participate in battle each round. Whichever character has the most power wins the round and deals damage equal to their ‘damage’ stat to the opposing player. Players have 12 health and the player with the most health remaining after all four rounds wins the match. 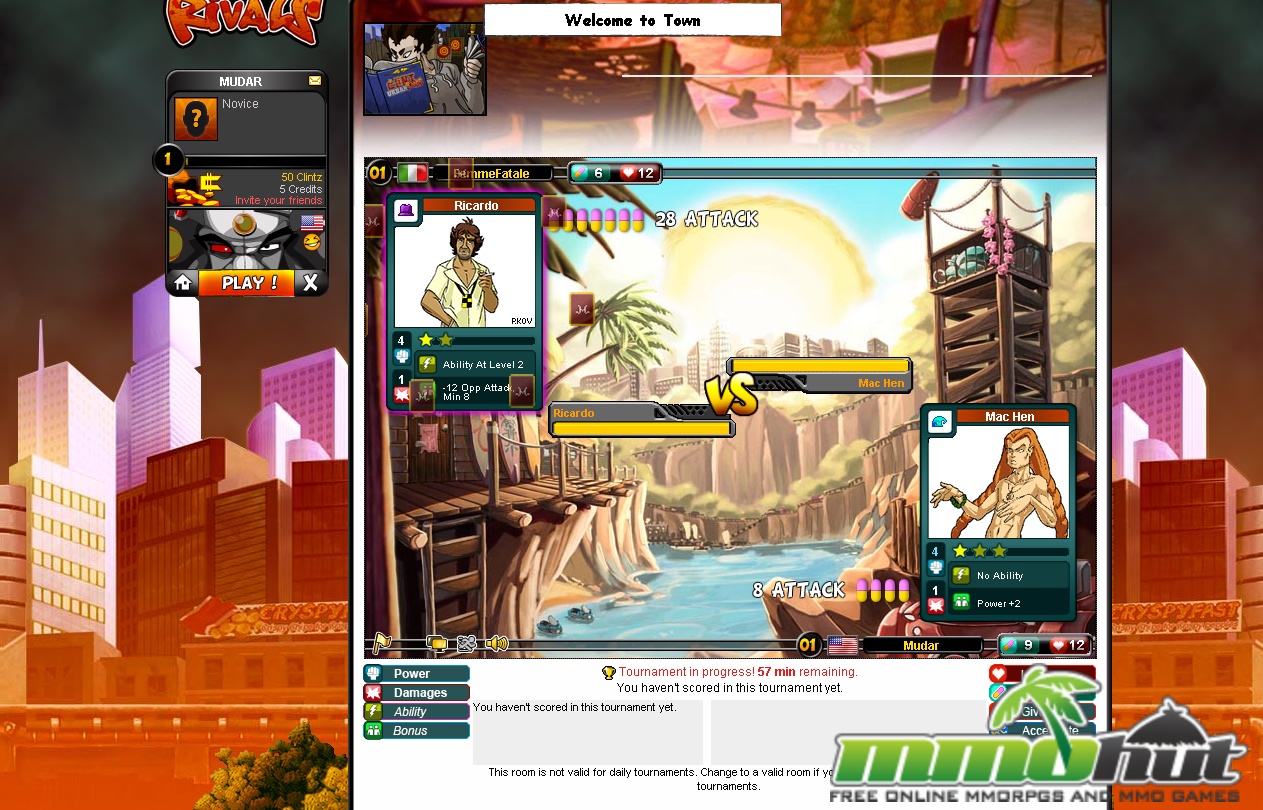 To add a bit of strategy to the game, players start each match with 12 pillz. Pillz adds one power to characters during combat and may be spent freely throughout the four rounds. This leaves players open to spend all 12 pillz on the first round and guarantee an early hit to their opponent’s health or to ration them and try to influence the outcome of all 4 battles. Some have compared this gameplay style to bluffing in poker but I don’t think it’s quite as advanced. from my experience, the best strategy is to simply pile pillz onto the character with the highest damage attribute and make sure it gets through. In one round I beefed my ‘Corallie’ card (which does 5 damage) with all my pillz and that was enough to win the match, even after losing the next 3 matches. I’m sure a move like this is much harder to pull off in higher level games since cards begin to unlock special abilities as they rank up. Both the player and each individual card gain experience in Urban Rivals which serves as a powerful incentive to keep playing. Some cards can only rank up once while others have 6 ranks to grow. Some cards start with abilities such as ‘Warren’ which automatically has power equal to that of the opponent’s selected card but most cards only gain abilities at higher ranks. 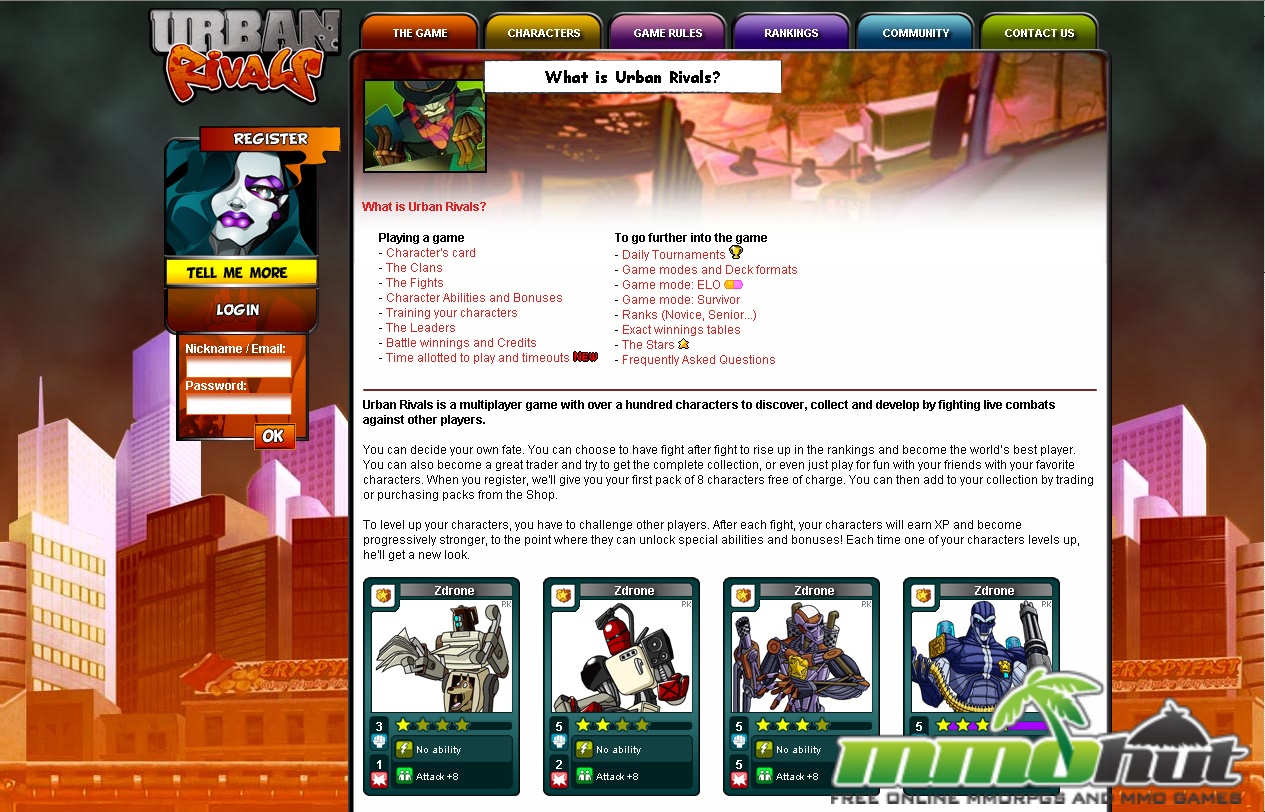 There are currently 20 clans in Urban Rivals with anywhere between 20-29 cards in each. Clans are similar to creature types in Magic: The Gathering, they represent characters that are similar to each other. When designing custom decks later on, it is best to keep clan affiliation in mind since characters receive clan bonuses when they’re grouped with fellow clan members. Before having to worry about all that, however, players will have to play a few rounds to level up and earn some Clintz. There are 12 game channels in Urban Rivals broken into level range. It only took me 4-5 rounds to advance from the ‘Welcome to Town’ channel (level 1-4) to the ‘Early Battles’ channel (5-7) so the experience rate is quite brisk. As long as you win more often than not, individual cards rank up quite rapidly too. Characters are rewarded with ~300 experience for winning their round but only ~60 if they lose. Besides experience, players earn the game’s main currency ‘clintz’ by playing matches. It is as the market that players can spend their clintz on new cards. The market is filled with cards put for sale by other players including out of print ‘collector’ cards which cost a obscene amount of clintz.

For players unwilling to patiently collect new cards by saving clintz, Urban Rivals offers booster packs which can be purchased using the game’s premium currency, credits. Credits can be purchased using a variently of methods including PayPal and credit cards for anywhere between 4-6 cents each depending on volume. Booster packs cost 20 credits (about $1) and come with 3 random cards. While paying players are likely to receive better cards, free players are still able to compete on a level playing field since no cards are denied to them, only put further out of reach. Urban Rivals has a large community with thousands of concurrent users from across the world. I don’t mind the international atmosphere itself but when someone from Brazil or Russia sends me gibberish it can be a bit annoying. The fact that people aren’t even trying to speak English leads me to believe Americans are a minority in the game which may be a point of concern for some players. But that doesn’t mean fans of TCGs should be deterred. The game offers daily tournaments, in-depth stat tracking including a constantly updated World Ranking (I’m 60407/110926 already!) and even a regularly updated comic book series that players can read on the official site. 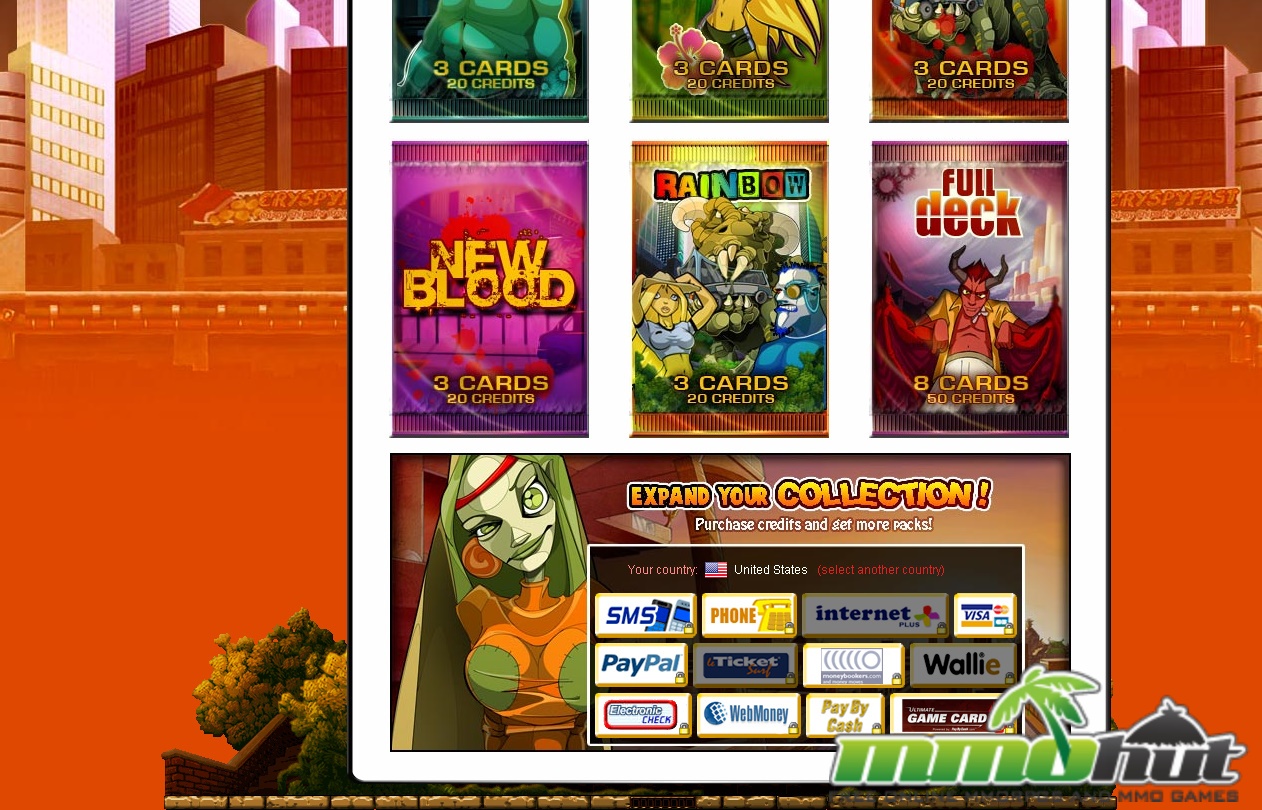 Urban Rivals is a great casual TCG that doesn’t require a giant wallet to play. With a short learning curve, stylish comic book art, and a large international playerbase, Urban Rivals is a solid game for fans of the genre.