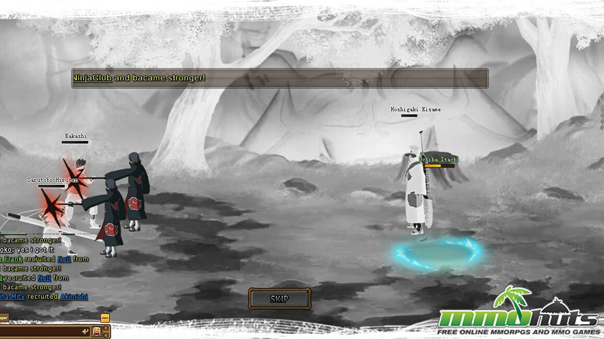 There is finally a MMORPG that is fully focused on the story of the ninja. And as a fan, I couldn’t wait to check it out.

When you make your character you have to choose between three fighting styles: Ninjutsu, Genjutsu and Taijutsu. This is a tough choice to make for anyone that has seen the show, as there are examples plenty of just how awesome each style can become. While some are rather dull, some of them are quite interesting, and the in-game player models do well to reflect the different styles. At first I wanted to take the normal path, the one of Ninjutsu which is also the most famous one in both the game and the show. But Genjutsu also appealed to me, and I love using mind tricks on people. In the end I decided to not be just another brick in the wall and went with the Genjutsu road less traveled. 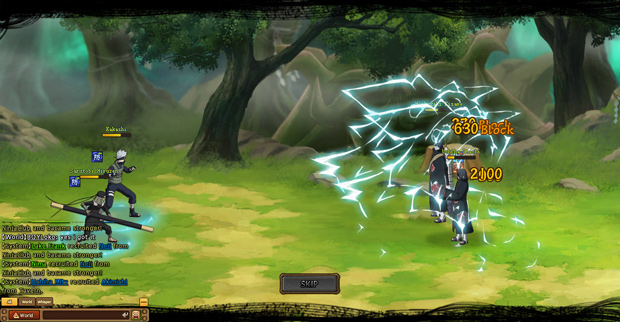 Every character that you unlock, can be thrown into your team. Your team is obviously your character, and other characters you will meet along your journey to master your art. The game of course rushes this and has far less filler than the show, but the overall story won’t be lost by these jumps in episodes. All the characters that you unlock can be given equipment to make them stronger. This equipment can also be made stronger with money and special items. Each character in the game also has a special role. 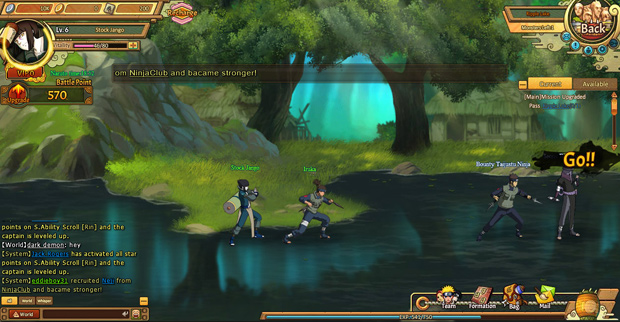 There are three roles in Unlimited Ninja. The Vanguard role, which basically is the tanking role of your whole army, the assaulter role who deals the most damage and the support role that helps anyone from the backline. Unlimited Ninja doesn’t make you wait long to gain access to a wide variety of characters. Most of these have a different specialization just like in the series. I unlocked Neji and Kiba, but was only able to use one of them, and so this was a really tough choice. In the end character statistics are there to help make the tougher decisions. See characters aren’t just differentiated by their skills but with their stats and weapon types. And your character also unlocks different techniques to use as you progress. You really have to play around with your formation and skills to make the ultimate fighting team.

The gameplay is rather simple. Most of your time is spent either clicking buttons or watching fighting animations. Unfortunately the game itself does everything automatically, from walking to quests to actually fighting other ninjas. There isn’t that much that you can do since everything is simulated. You basically have to see this game as a strategy game. You control the strings of fate from the background, but as soon as the moment comes, you can do nothing but watch and hope. You can choose between a damaging stun or powerful AoE skill. 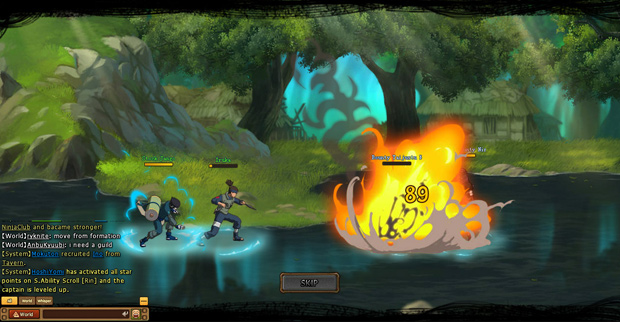 Besides your team selection you also get a summon. Everyone starts with the One-Tailed Shukaku, one of the first tailed beast you encounter in the game. These tailed beast drastically improve your team so you want to have one on the playing field at all times possible. For anyone that hasn’t seen the show, these beasts live inside some of the characters, giving them special powers and making them a lot stronger. But in this game they are more shown as pets rather than beasts living in your body.

Unfortunately like I said there isn’t a heck lot you can do. And this disappoints me. The story line is interesting, but as a fan of the genre I have already seen it before. Even if it is cool to see your own character fighting alongside these heroes we have seen in the actual show, it is still a rather dull experience, especially since there is no control in battle at all, and you just have to hope your spells do enough damage. It feels like it is based on luck, and I rather not play a game that is based on luck. Testing your strength in the Arena is no different as you just bet your luck against other players’ teams and hope for the best. In the earlier levels when you unlock Arena this becomes apparent fast. Basically each character and each team functions the same. Even though both teams should at that point have equal stats and equipment, the matches tend to range from complete domination to total slaughter. There’s just no middle point and no logic as to why. 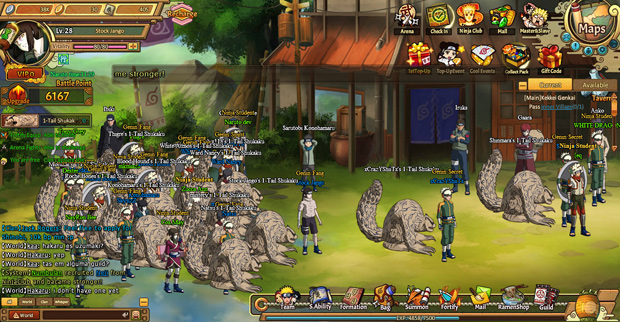 Finally there’s a game about the popular archetype of ninjas available online! Unfortunately, it sounds more awesome than it really is. The game itself is entertainment, I have to be fair on that, but there isn’t a lot that the player actually can do. All the fighting is simulated and you can only watch, stare, and hope that your team will survive. Even by taking every chance I could to avoid becoming another brick in the wall, it proved a futile effort in Unlimited Ninja. You are a clone, and a lot of people look the same, and go for the same team composition because it is the most logical thing to do. Sure you have a choice, but do you rather want to be weak, or have a fighting chance? I am disappointed such a boring outcome to a style of game that has been long awaited; I expected more.