There aren’t a lot of games specifically about sailing the open seas, having your own crew, and making your own adventure out of it in a rather free form setting. As such Uncharted Waters Online remains successful after almost 5 years of service, now with a Playstation 4 version on the way later this year. And even though the game might be looking a little outdated, the game offers a wide variety of fun gameplay activities that it’s still amazingly active community will gladly join you in. 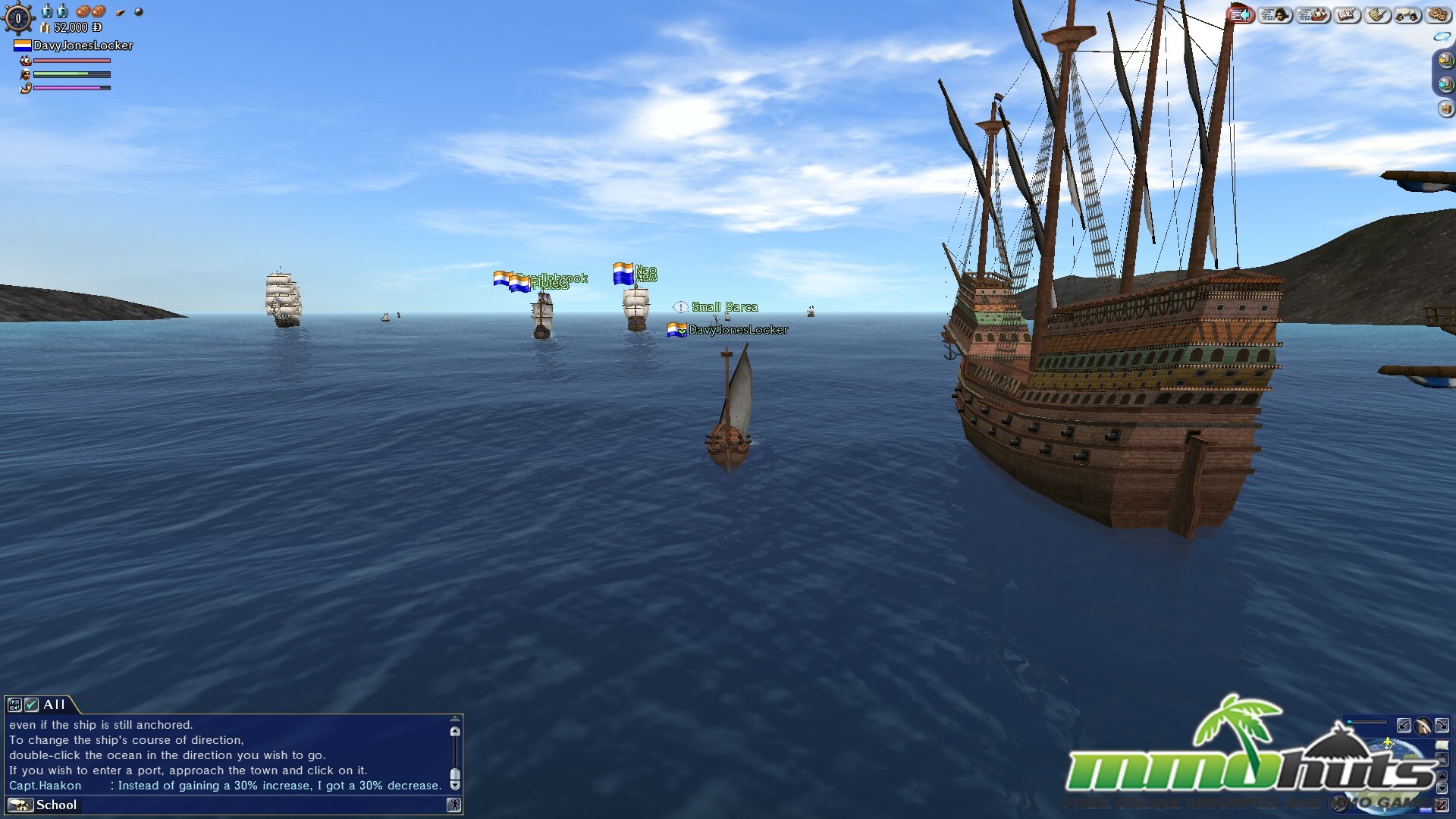 The community is friendly. A good thing when their ships are 20x larger than yours.

The community is really something I was happy to see so active. Inside each city or outside the ports I’ve seen a ton of players going on their business and sailing everywhere doing their own thing. When doing follow up reviews on MMOs these days, most are ghost towns in the starter zones, so this was startling to me. Apparently having no competition for your genre makes a big difference in keeping the game active over time.

Basic Beginnings
When you begin making your first character you will notice that you can only choose among 6 nationalities. These nationalities are mainly the countries that have done a lot of trading or were major world players in the age of colonization. As you’d expect, that means the starting zone is primarily staged on the European coastlines, leaving players to choose between England, the Dutch Republic, France, the Spanish Empire, the Kingdom of Portugal and the Republic of Venice as their home port. Besides their sailor’s home, they can also choose what kind of class to be. There are three classes in these games, and even though you will have to make a choice, you aren’t necessarily bound or forced to play this specific role. The player can choose between adventurer, merchant, and soldier. These classes are exactly what they are named after, so don’t expect them to fair equally in a fight. That’s just how Uncharted Waters Online rolls (or sails). Gameplay doesn’t have to be about seeing how has the biggest guns, but can rather be about who has the best strats to make a ton of money without getting robbed. 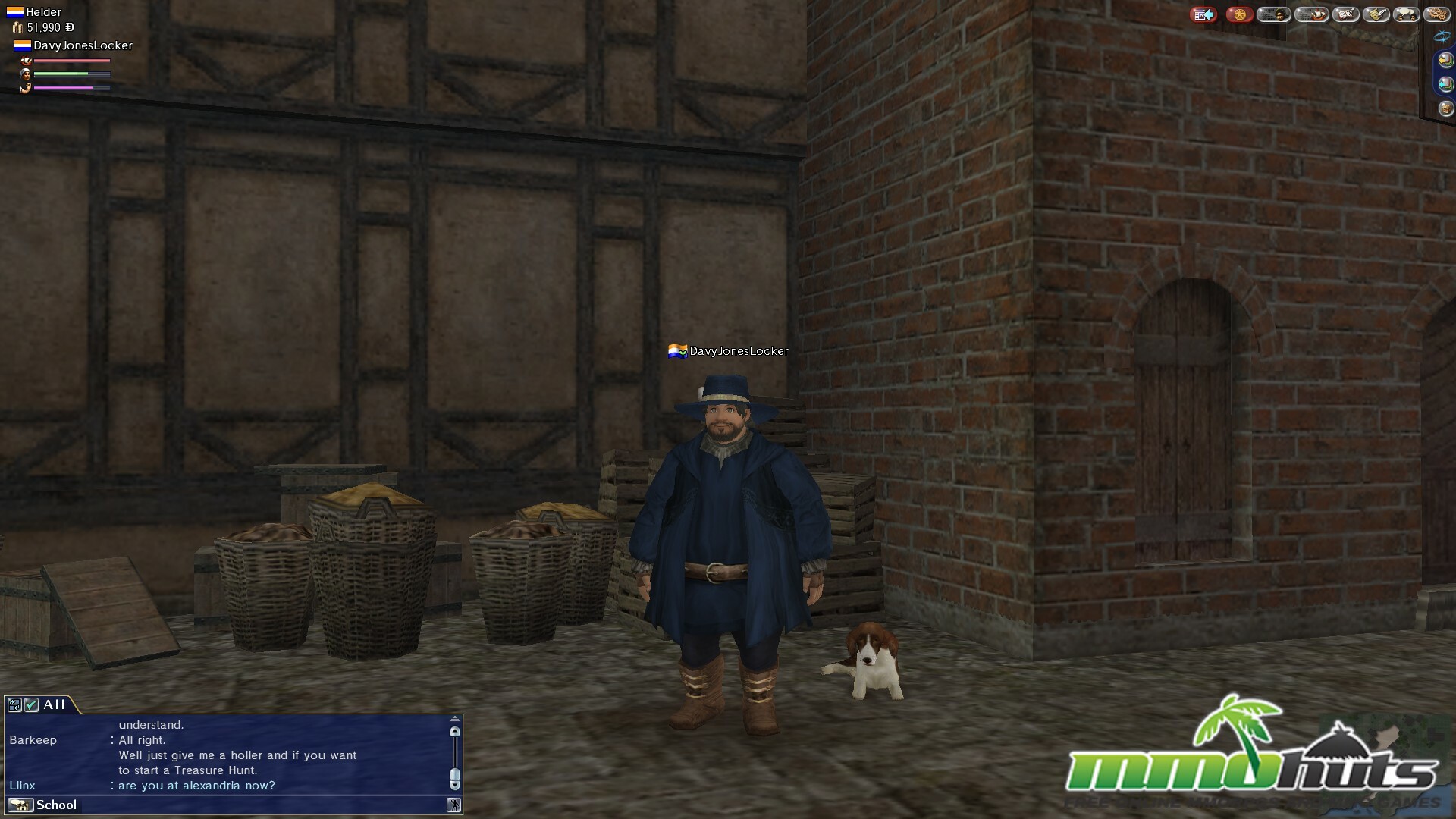 My first matey is a real seadog.

Even if you choose the role of soldier, you aren’t bound to being one. Especially for new players it is recommended to enlist in school and take different classes for each specific role to see what the fuss is all about. If you simply want to trade goods, sail from one place to another, and do not mind the lack of excitement of having your life on the line, then that’s what you should do. You won’t be held back for failing to complete any specific class based objectives so don’t worry and just do what’s fun. This can be a rare and jarring realization in the MMORPG world, but I assure you it’s a nice change of pace. Though UWO isn’t quite on the level of a full-fledged sandbox, its style of content certainly seems to have been a front runner moving towards that movement. As such if you dig the idea of sandbox gaming but still like a little bit of structure in your objectives, Uncharted Waters Online offers a happy medium.

I myself decided to do a bit of everything to test how the game has evolved over the years. I like adventures, I like to be rich, and I would never back away from a good fight in a video game. And this is perfectly fine, if you’re willing to put in the time. Each class levels independently, so leveling all your classes can be a slow process. But to maximize your experience it is certainly worthwhile. This isn’t just about experiencing gameplay as a tank versus a dps, but an entirely different perspective on every aspect of the game.

Story
The storyline in Uncharted Waters Online isn’t half as bad either, it follows the evolution of the Age of Exploration. As you progress, you’ll witness the rise of the English naval power and spread of European influence to the New World. If you’re not a total stickler for historical accuracy, and can overlook a few anachronisms, it does give you a nice education about how the world ran in the era of pirates and awful maps. Not Somalians in speedboats but the real gritty swashbucklers drunk on rum and singsongs! 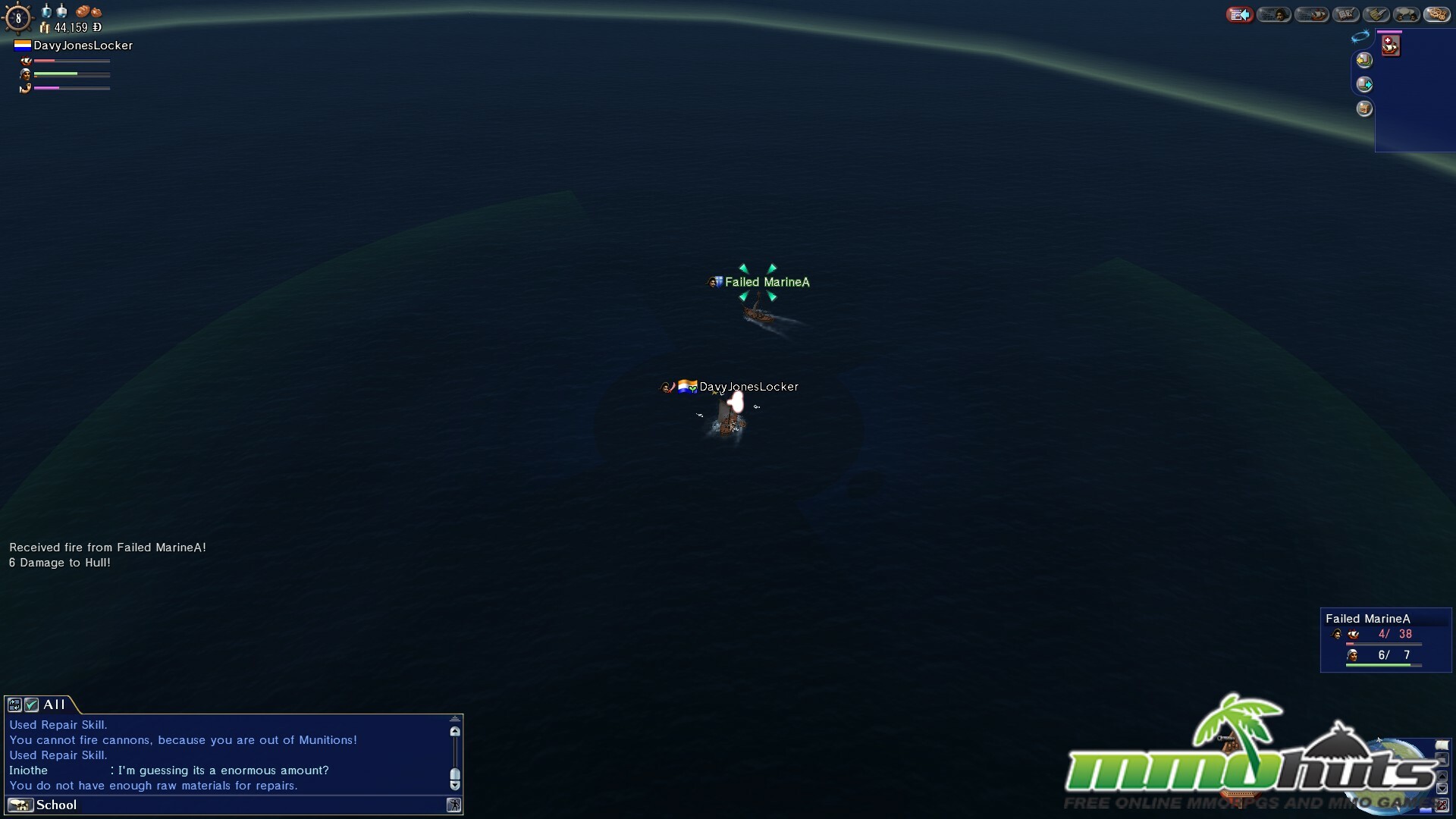 Despite the aged graphics, sea battles feel quite intense.

Gameplay
Since I had chosen to belong to the Dutch Republic, I began in Amsterdam. Rather than setting sail to disaster, I choose the wiser route of starting off in school. When I was done following the tutorial so in-depth, it deserves a placard upon completion, I was sufficiently ready to set sail. First stop? The rich shores of England, full of novice captains and lush riches. Or so I thought.

My first fight turned quickly into a melee battle as our crew went head to head. I simply didn’t have the biggest swords and lost. My second fight went a little better, but I think my luck wasn’t with me that day. I ran out of cannon projectiles right when the ship I was fighting with was on its last health points. So I had to return home, and experienced the life of a pirate to get my payroll back in the black. When you plan to steal booty, you also have to have enough resources for when the fights don’t go too well, or you will flat out fail. When leaving port, you have to check if you have enough food on board and other items you might need, such as say cannon projectiles! Wasting a good chunk of cannons with no return on investment costs you greatly, not just from ammunition costs but also from food and rum spent on your crew. 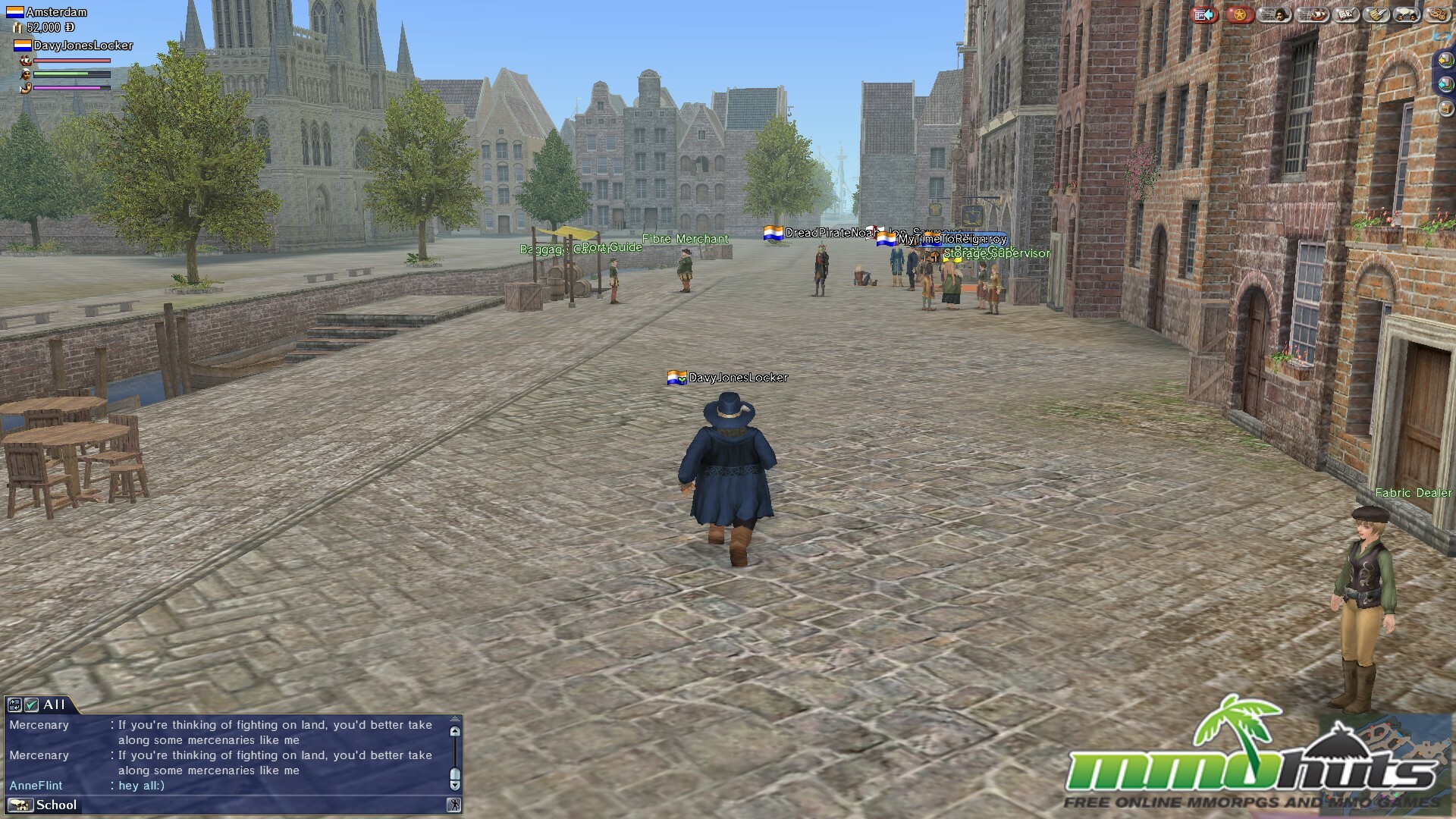 One area of missed realism, my avatar is way too fat for doing this much running.

And the game chooses to strike a rather realistic tone in this department. For instance, ships aren’t simply sitting around in a ship dealership with sleazy salesmen waiting to take your coin. No you have to slowly build up your ship with different parts over time. In this vein, might say your ship has the same development as your character. You can’t just sail the seas on your own, you also need a crew to help you out. As you might expect, larger ships require more mateys to stay functional, meaning you have to visit the local tavern to recruit additional scallywags over time. This doubles as the location to listen in on rumors about fabled treasures.

Conclusion: Great (4/5)
If you have read the full article, you notice I sound really enthusiastic, and that’s because I really am. If you are a big fan of sailing a ship, be it either for coin or, adventure, or action, this game has mastered the concept. Its only drawback is in the lagging graphical department, and in total content. However as the years have passed by, the world has continued to grow, with more and more realms to explore and story to experience. If you’re a gameplay over graphics kind of gamer, Uncharted Waters Online is a must try. With its still active and awesome community, this old seadog still seems to have plenty more years ahead of it. Besides, we pirates need new blood in the waters to keep fed! See you on the open seas…