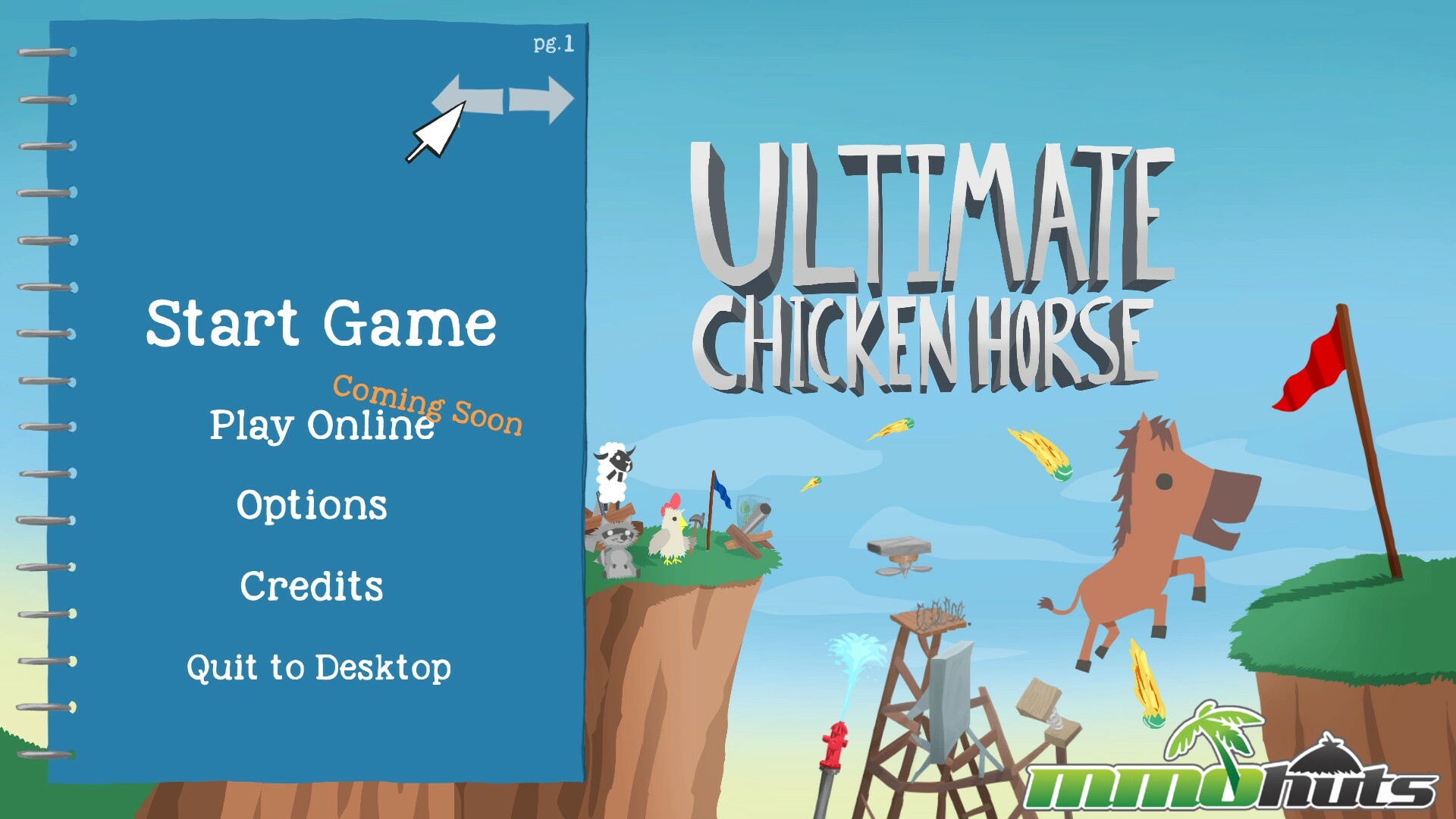 Put on your mucking jeans – we’re going to the farm. Don’t worry, we’re not heading into a farming or livestock simulator. We’re suiting up for Ultimate Chicken Horse from Clever Endeavour Games, a game thankfully not about egg-laying equines. UCH is a puzzle-platformer party game with a simple motto: screw your opponents, but don’t screw yourself.

There are four playable characters in UCH to start with: Chicken, Horse, Sheep, and Raccoon. Each has its own animations and voice, but are otherwise identical in gameplay. At the start of a session, each player can choose one of the four animals (no duplicates, so don’t hope to run a ‘horse race’). While this is a pretty basic set-up to start, further animals and even costume pieces are unlockable during special map events (indicated by ? on the map select screen). 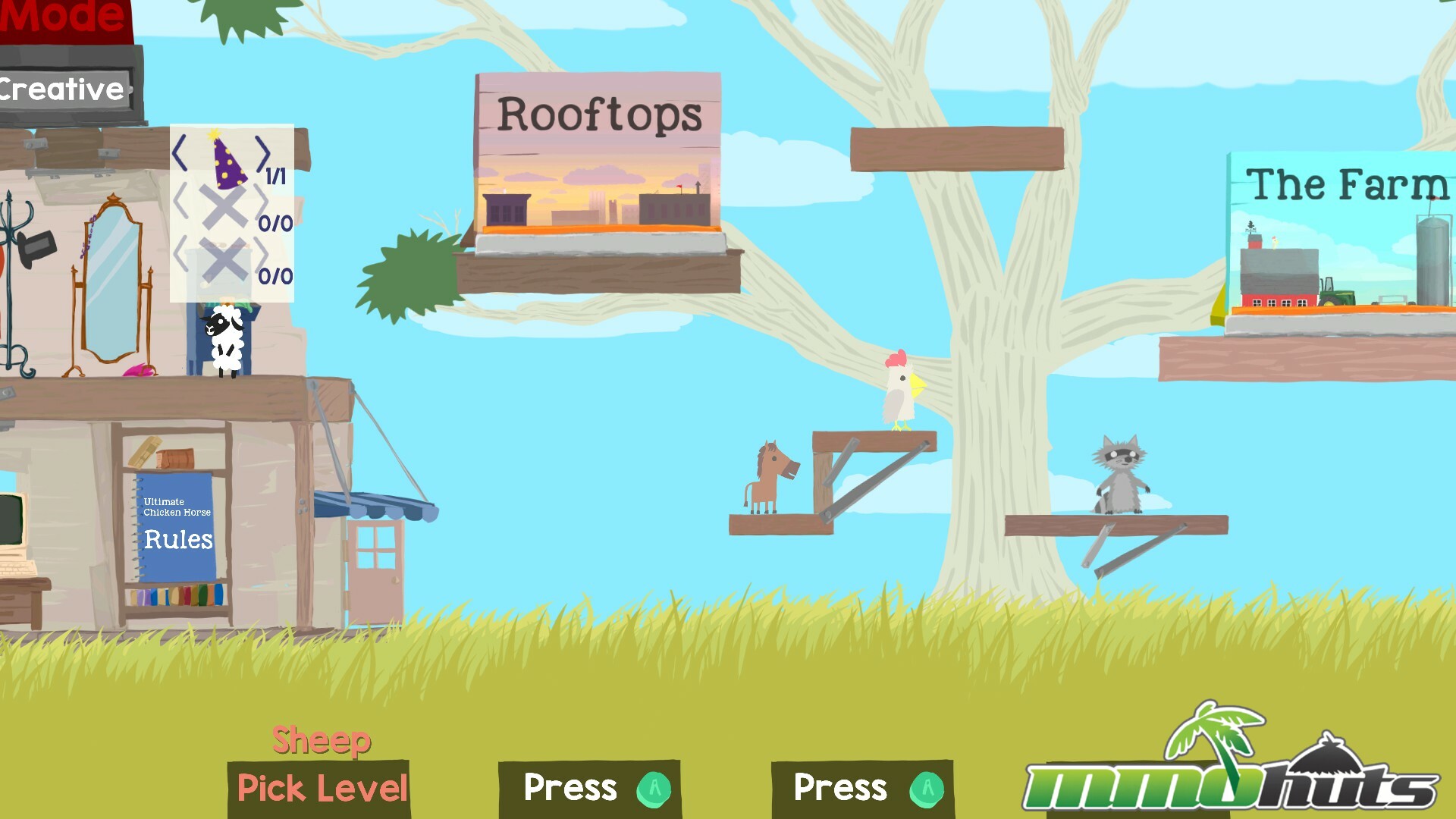 The local co-op mode offers two modes: party and creative. In both modes, players use their own controller. However, players can also share a controller in creative mode. A special controller-sharing couch can be found in the lobby (called the “Treehouse”) which players can ‘sit’ in to share a single controller and take turns. This is a nice touch to a competitive party game that usually relies on multiple controllers. While shared controllers will miss out on the fun of party mode, it would be impossible to allow a shared controller to enjoy the simultaneous mayhem.

In Party Mode, things get crazy fast. Each round starts off with a shake of the “Party Box.” Inside each box are a handful of stage pieces to choose from. Each player gets a cursor and must choose one platform, gadget, or trap from the selection in the party box. Once selected, the item becomes unavailable for the others to use. This turns careful planning on its head as the Party Box becomes a quick grabby-hands scramble to get your hands on what, in the heat of the moment, you think you can make use of. Not only will you frequently be denied by faster players, but you may also find yourself quickly picking up whatever you can grab – which may not be so appealing to work with. There are no take-backs. 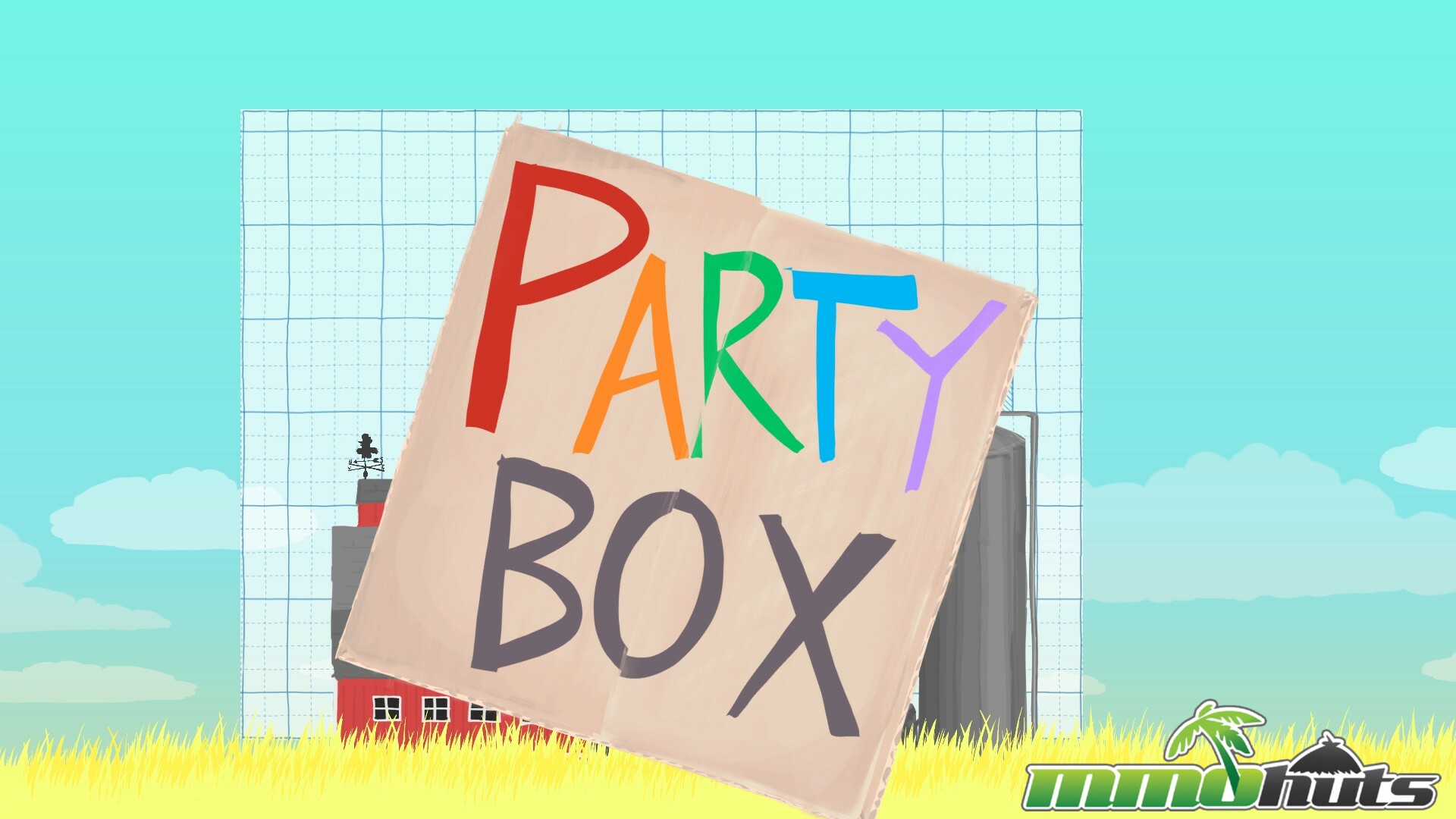 You probably shouldn't open a box like this IRL.

The second phase of the round begins after all players have chosen their item. Each player can move around the stage map and choose where to place their item. Items can be rotated to fit your needs, though not changed in size. The goal of this is two-fold: first, players have to make it possible to reach the goal, which means building platforms that will let them go across the gap between the start and finish. Second, players need to set traps and obstacles that will keep their opponents from reaching the goal without being completely unpassable. This is where the real mind-games come into play, because you can also attempt to strategically wait out your opponent’s placements to make yours more useful, or try to pay attention to their placement strategy to counteract it with your own. That is, of course, if you don’t simply get caught up in the intensity of it all and quickly place your item down in the first likely useable spot you see. 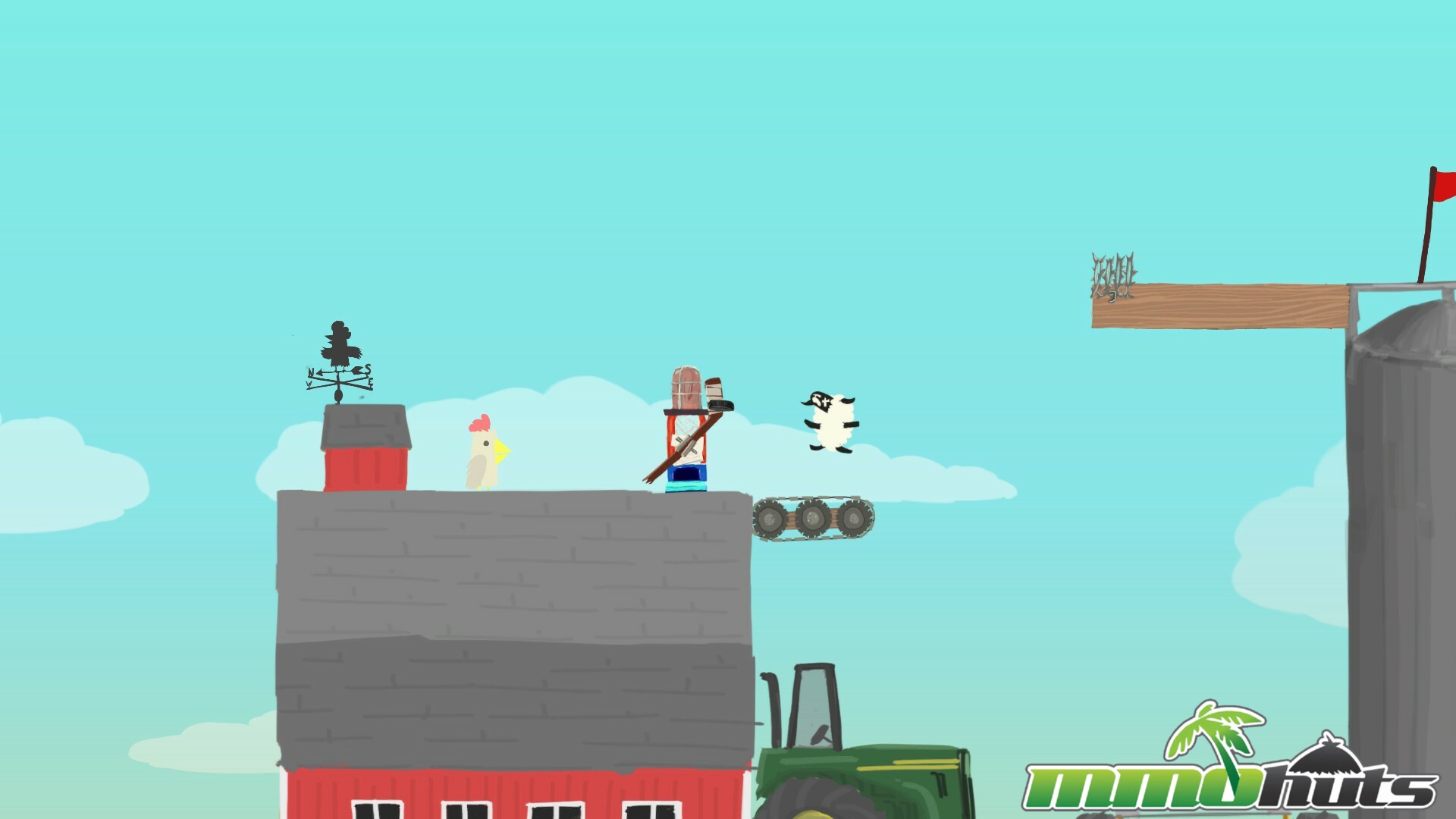 The third phase of each round commences the actual foot race to the finish. Each character can dash, jump, and wall jump without limits. As things get more complex, players have to navigate traps that include slippery ice, barbed wire, crossbow shots, and even black holes. This phase is pure and simple platforming, and your opponents can’t do anything to make things worse other than what they’ve already done (unless, of course, they’re shit talking you at the same time). This is all a matter of skill with a tiny dash of luck, but hopefully, you’ll make it to the flag and not get impaled or fall to your doom.

After each round, a score tally will come up. If everyone makes it to the flag, no points are awarded. Otherwise, points are awarded for those who reach the goal and those who successfully trap an enemy. There is also the “underdog” system. After a few rounds, a player who is clearly behind the others will be labelled the underdog. Should this player succeed in a future round, they will get a “come back” score bonus. This system helps players stay competitive in the game for the whole match. However, these bonus points can be disabled in the game’s “Rule Book.” 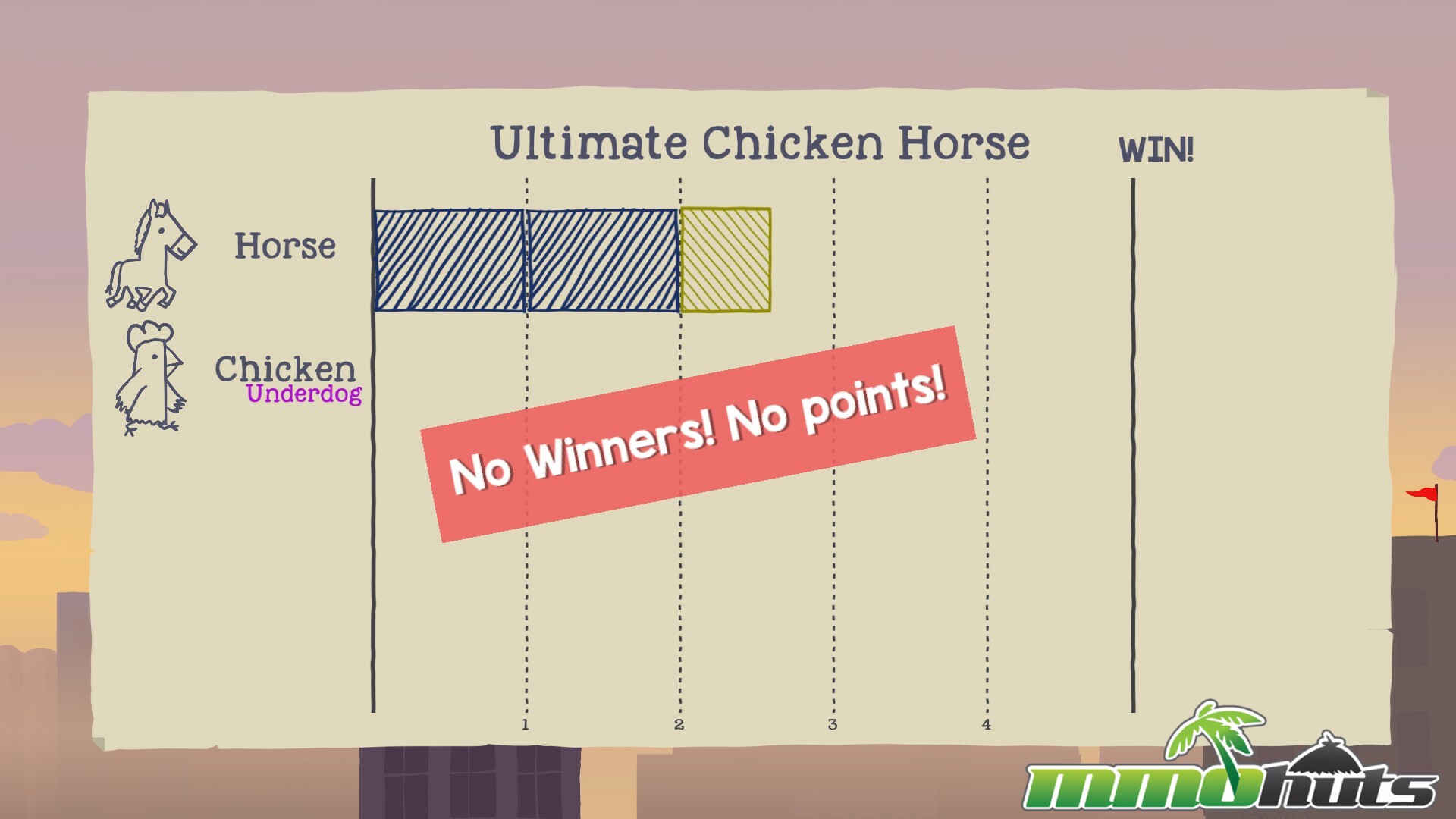 This isn't Who's Line Is It Anyway? Points DO matter.

Matches last until one player hits a full score bar, or until the round limit (which can be customized, but the default is 12) is reached. If all players are at a tie at the end of the round limit, a Sudden Death round will occur. In this round, no more traps are placed. Instead, each player must race to the finish as fast as they can. The fastest one to the finish line wins. In either scenario, the winner will be declared the Ultimate Animal of Their Choosing. And darn it all, they probably earned that title. 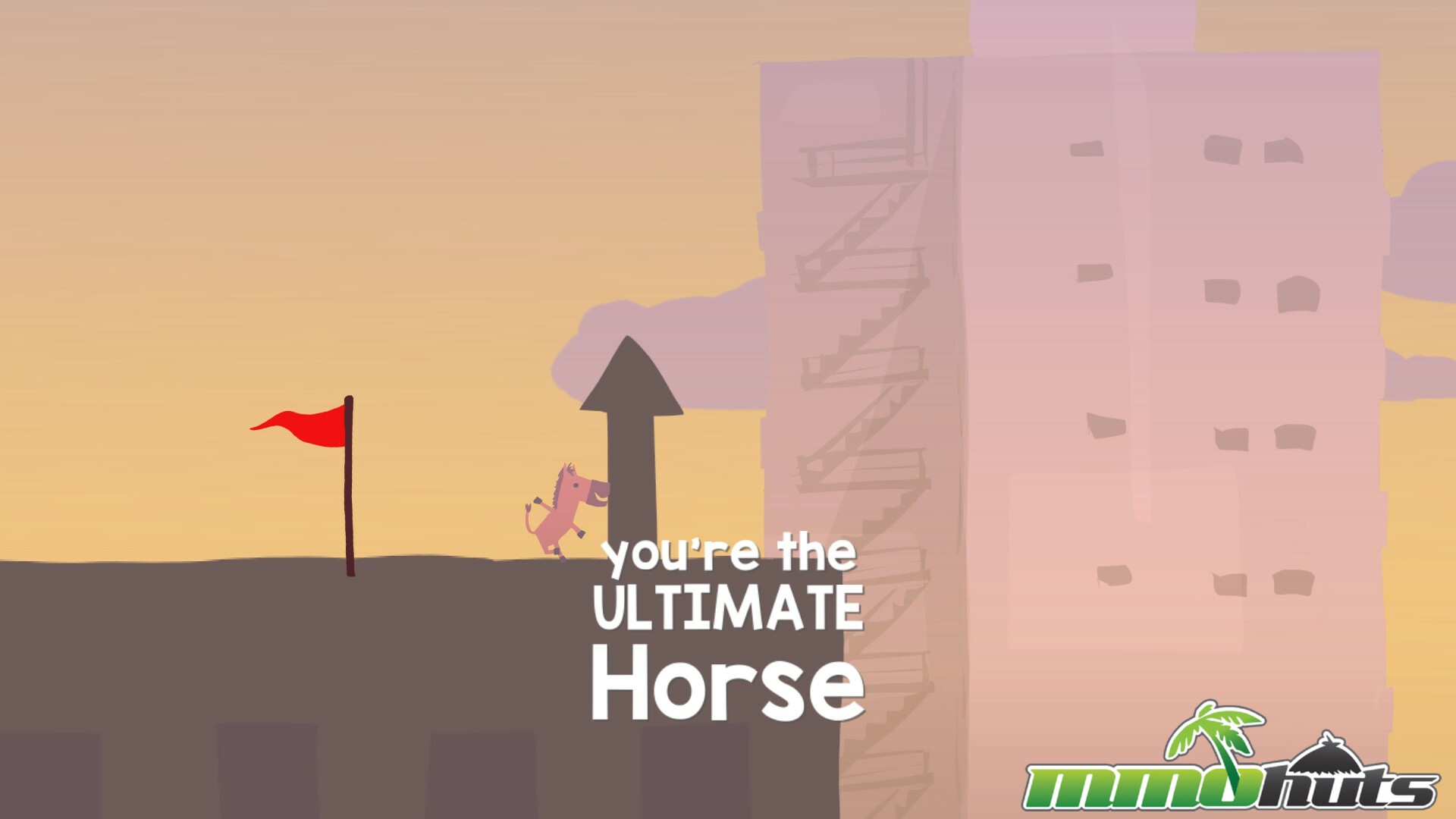 These are serious life goals for a farm animal.

Creative Mode plays a little more relaxed but perhaps more deviously. Instead of each phase happening simultaneously, players take turns placing objects and running the course. Additionally, players have access to the full book of items and gadgets to place, rather than having to pick between just a few. This gives players time to plot, plan, and work against each other without the impulsive madness that happens in Party Mode. If Ultimate Chicken Horse is part madness and part genius, Creative Mode makes the second part of the equation.

Initially, two maps are available to play on: Rooftops and the Farm. Further maps are unlockable, like characters, as you play. This brings to light one aspect that Ultimate Chicken Horse is currently lacking: information. There’s nothing to clue players in that characters or maps are unlockable. There’s no tutorial to explain the game’s basic rules. All that is available, in-game, is a control map for the keyboard and controller. My first reaction when loading the game was “wait, where are all the other maps and characters?”, so I can only imagine the disappointment for new players who don’t know these are available or how to get them.

Ultimate Chicken Horse is also lacking online multiplayer at launch. This isn’t an oversight, and beta is ready to be open soon for that feature. Initially, UCH was planned to have local multiplayer and a single-player puzzle mode. However, after some public demoing, it was clear there was a much higher demand for online multiplayer. Clever Endeavour has heard the pleas and should deliver on the promise soon. While playing mental tug-of-war against Outfoxed is satisfying, I can’t wait to see what randomness will result when The Internet ™ gets involved. 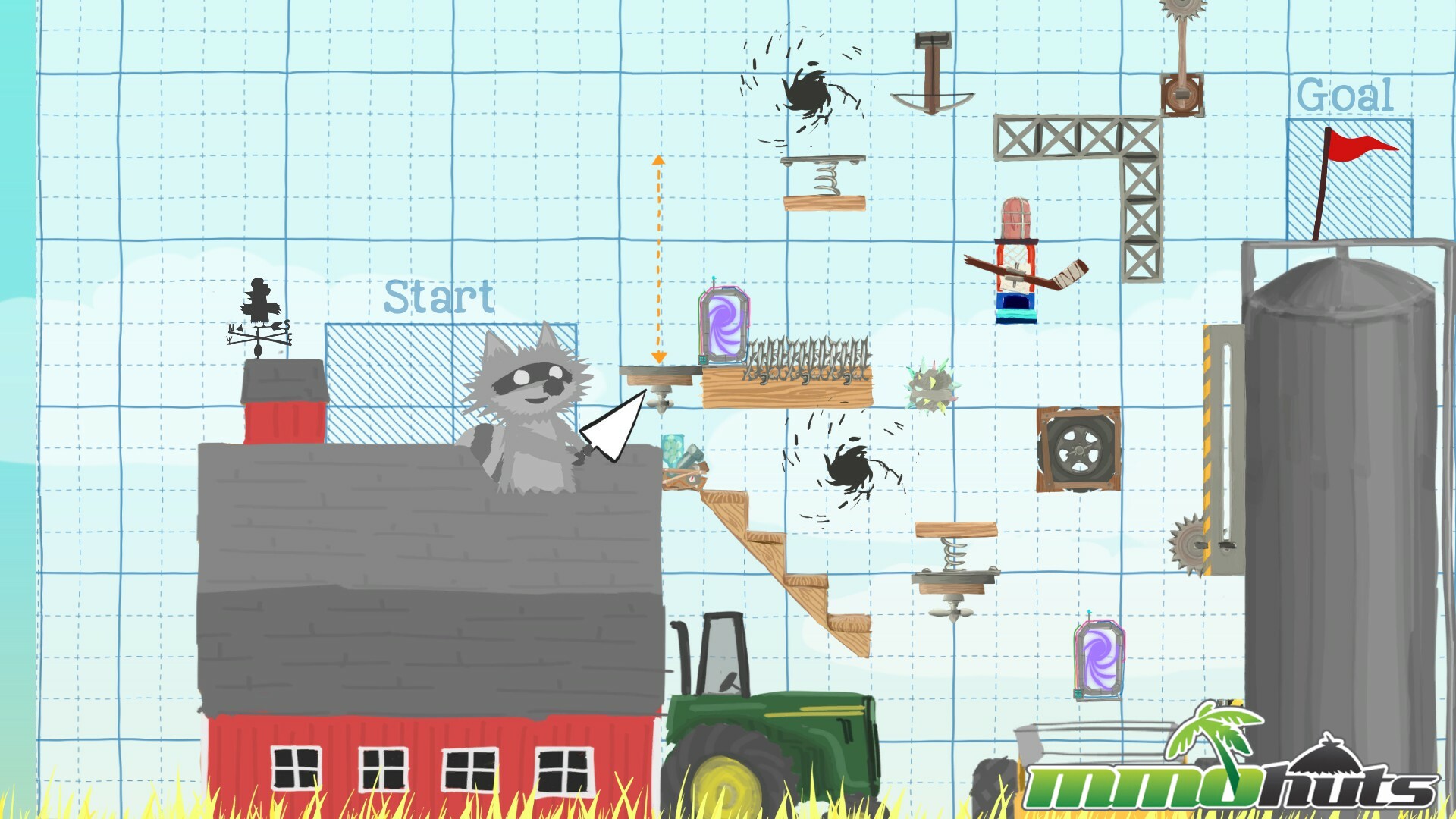 Totally passable, if you can dodge, dip, dive, duck, and dodge.

Ultimate Chicken Horse may have a ridiculous name, but it’s turned out to be a true delight, capable of delivering one of the best cerebral puzzle platforming experiences a party game could bring to market. All the game needs is more informational polish and a stable online multiplayer to be truly excellent in my books. Whether you hunger for the fun of creating Rube Goldberg-like traps, want a great game to argue over after dinner, or something hilarious to stream with friends, Ultimate Chicken Horse is a definite pick up. Unless you’re a neigh-sayer, of course.