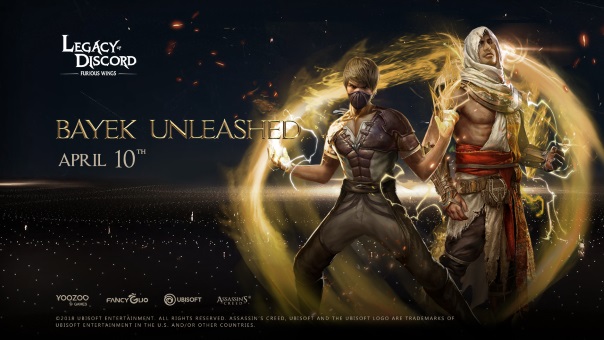 The Ubisoft crossover continues, with Legacy of Discord seeing another Assassin’s Creed character: Bayek of Siwa, along with a Major Update. Bayek of Siwa is an Egyptian progenitor of the Assassin Brotherhood and will shake up the Metamorph System, coming on May 10th. The license with Ubisoft will continue to bring interesting characters to Legacy of Discord, and transforming into the Egyptian assassin will give the exclusive skills: Shield Charge and Power Strike.  Along with this will be a host of new updates, such as Guild Clash, a new cross-server game mode. Guilds will participate in a tournament for glory, where servers are divided into War Divisions. A total of 64 guilds will be selected, and the guilds with the top Battle Rating on each server will be seeded automatically. The others will be selected based on cross-server BR rankings.

Each guild can send up to 20 members (including the guild leader) to a battle. The results of each battle are determined by the final flag capture points. The center Node flag is worth the most points, while the side 2 flags are worth less. Players must take flags from the nodes back to their guild’s Safe Zone to capture them and earn points. Each time a flag is brought back to a guild’s Safe Zone, the corresponding Node will spawn a new flag. Players can make offerings at the War Shrine to increase its EXP and obtain item rewards every day. Bonuses will also increase when the War Shrine levels up.