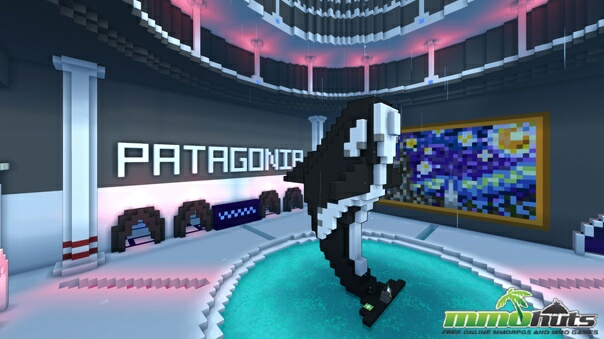 On Thursday the 25th, I got the chance to sit down with a couple of developers from the Trove team. They gave me an overview of how far the game has come and some insight on where it’s heading. I believe you’ll be hard pressed to find someone who honestly feels that Trove is a bad game, which is a rarity in an MMO market saturated with dime-a-dozen Free-to-Play titles. Trion has managed to strike gold with Trove. It’s managed to attract a large player base, offer tons of unique content, a fully destructible environment… All while allowing thousands upon thousands of players to play together without being split up by servers. As it was said during the demo: Trove is, “like an MMO, but only fun.”

I have some experience with Trove, but not much. The last time I actively played was earlier this year, with my last excursion into the game being at the release of their Pirate content. This introduced a new biome, a new form of mount (ships, some with cannons), and a new ranged class: The Pirate Captain. Trove’s development is full of what would be considered large content updates in other MMOs. From the Candyland and Candy Barbarian to the Neon Ninja class. It seems that whenever I look at the game, something new and fantastic has been added. 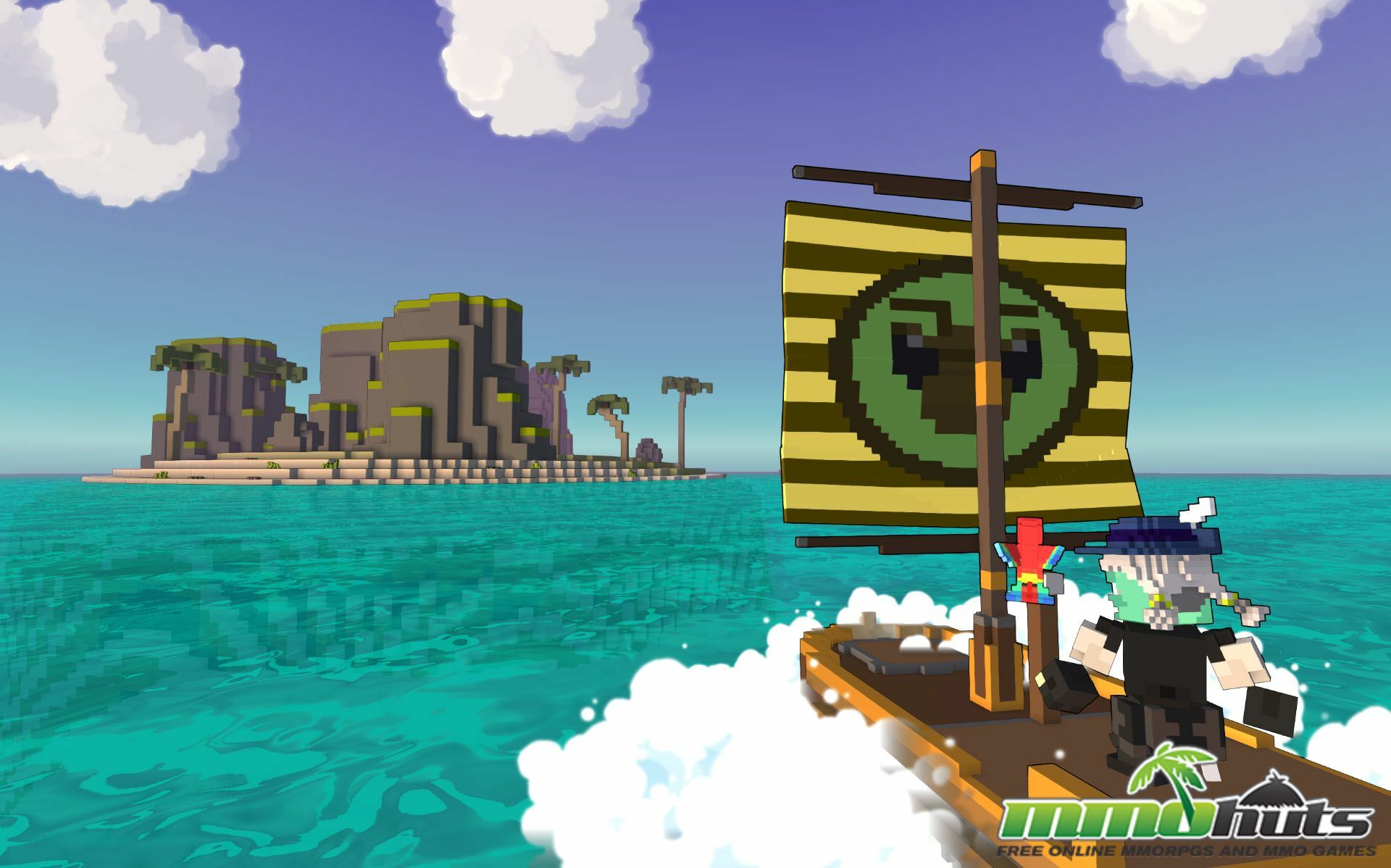 The latest addition, though, is the introduction of Dragons. These are pets that can (for now) only be gained through hard work by participating in a special event. They start out as hatchlings, but through your efforts they can grow. So the tiny cute thing that followed you around can grow into a mighty mount, eventually gaining the ability to fly and breath flame. That, combined with the wings they recently added to the game gives you some hints as to how the game will be evolving in the future.

And you’ll need all the help flying you can get when you take on the Sky Realm. As the name suggests, this realm is full of floating islands and structures in the sky that you can visit and explore. Unlike other biomes, the only way to visit the Sky Realm is to take a portal directly to it. Also unlike other biomes, Sky Realm is a lot less violent, offering more “zen” activities to partake in. If you want to visit, you’ll need to join a well-established club or be prepared to work hard at gathering all the materials to construct the portal yourself, which can be quite difficult. 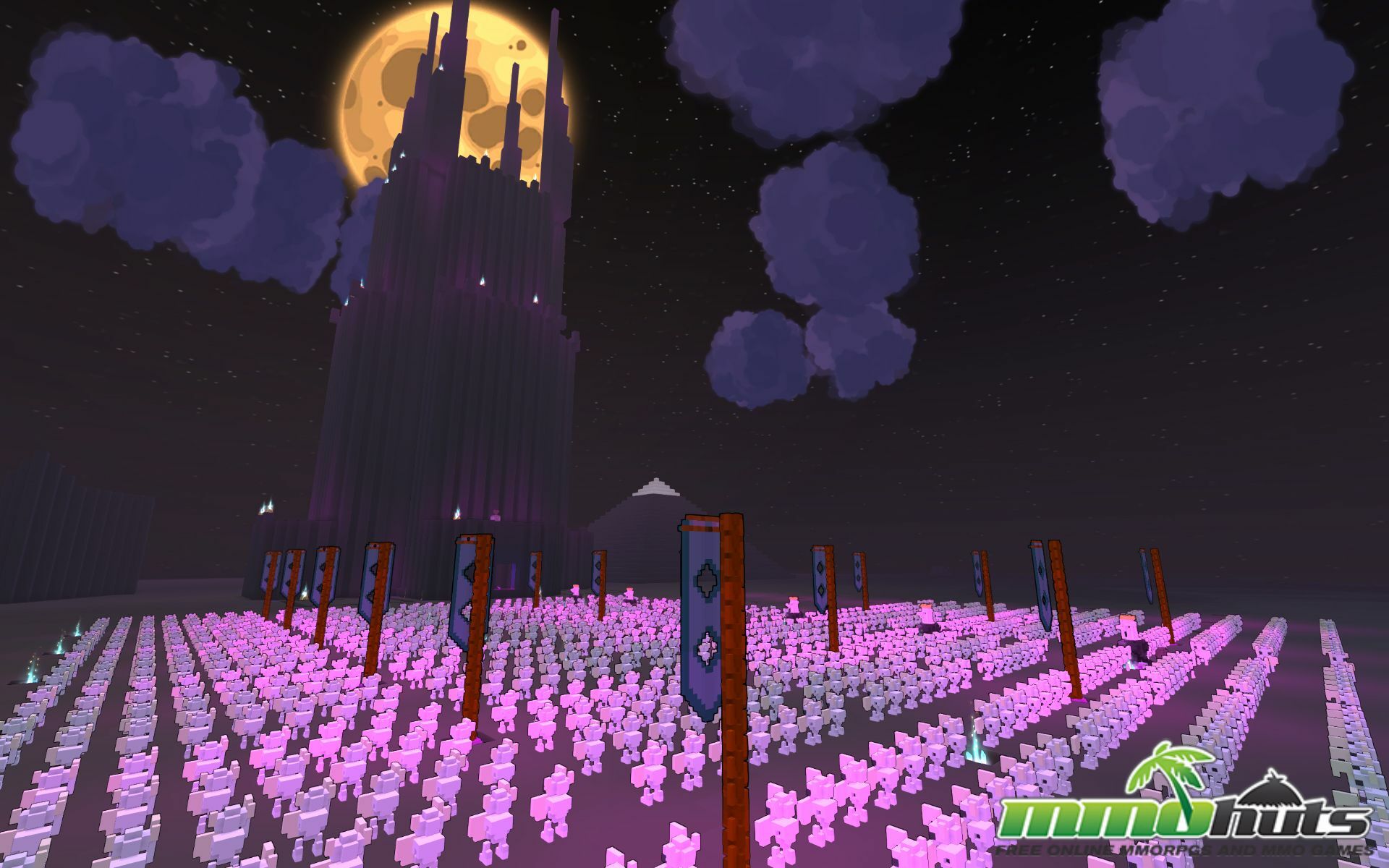 And speaking of clubs, the Trove devs have been hard at work adding lots of fun features for their very creative players. I was shown a couple of club worlds created by dedicated players and “impressed” doesn’t even begin to describe how I felt. First, there was a massive structure that was simply monolithic and awe inspiring. Then I was shown what some players had done with the magrails and music blocks available to them, constructing actual music that their fellow players can enjoy while riding down the rails.

And while Trove is heavy on social features, it also has a very intense action core that fans of hack-and-slash gameplay will enjoy. Having played in the past, I was already familiar with the basics of dungeons in Trove. You’ve got a number of different biomes, each spawning a number of different dungeons with a ton of interesting monsters specific to each biome. What I wasn’t familiar with was the fact that Trove’s devs had allowed players to design a lot of the dungeons. Also, each boss encounter is unique even if the boss looks the same. It might be minor differences or there may be some major changes, but it’s usually going to be a different experience each time. 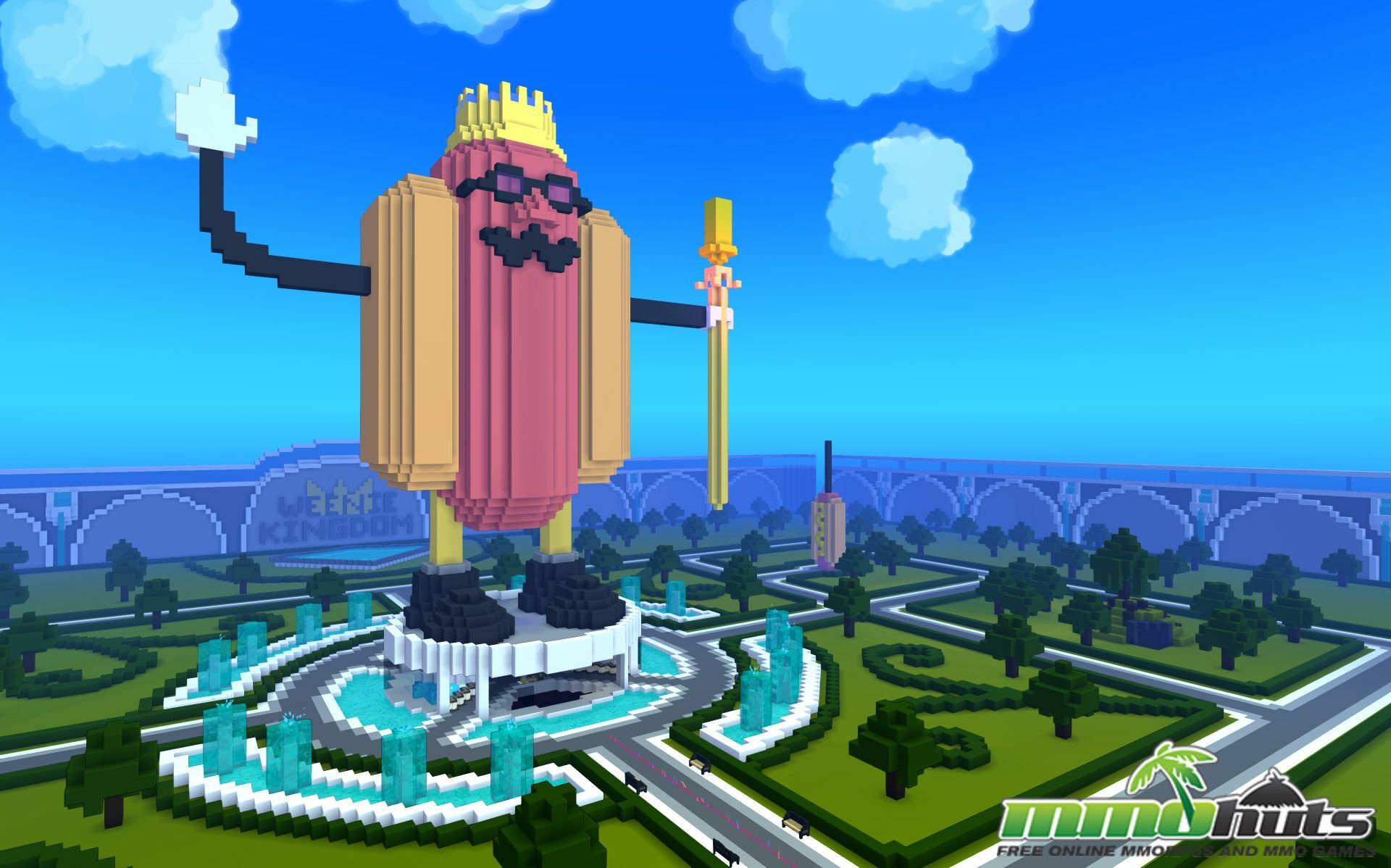 All will bow before the Jumboist of all Jumbo Franks.

Speaking of player created content, Trove has a ton of it. Trion has opened the floodgates and allowed players to submit designs in the hopes of getting them in-game. Almost similar to how Steam users can use the Steam workshop to get their content into some games. And speaking of Steam, Trove is releasing on that platform today, July 9th, along with the official release. This commitment to allowing their users what is essentially unlimited freedom within their game is stunning.

Something that has been a sore subject over the past couple of years has been free-to-play models. Most games seem to abuse the cash shop, enticing players by offering them power in exchange for cash. It sucks when you work hard to be good at a game, only to find yourself miles behind the guy who has a bigger paycheck than you simply because he could afford to spend more money on the game. Trove doesn’t have this issue, fortunately. The very nature of the game means that you can’t pay-to-win, as there is no real “winning” in the game. Also, players can trade the cash shop items, meaning that even if you don’t want to spend a penny on the game, you can still get your hands on cash shop benefits.

Now that we’ve discussed what’s already in the game, I’ll tell you what I was able to glean about the future of Trove. Most importantly, I was assured that development would continue well after Trove’s release. Nothing is more disappointing than a game that is abandoned after the release hype has died down, only receiving updates a few times a year. As I already mentioned, Trove will be getting its official release on July 9th (along with a Steam release). There is also a complete UI overhaul coming with release, some of the changes are already available for viewing in the game. 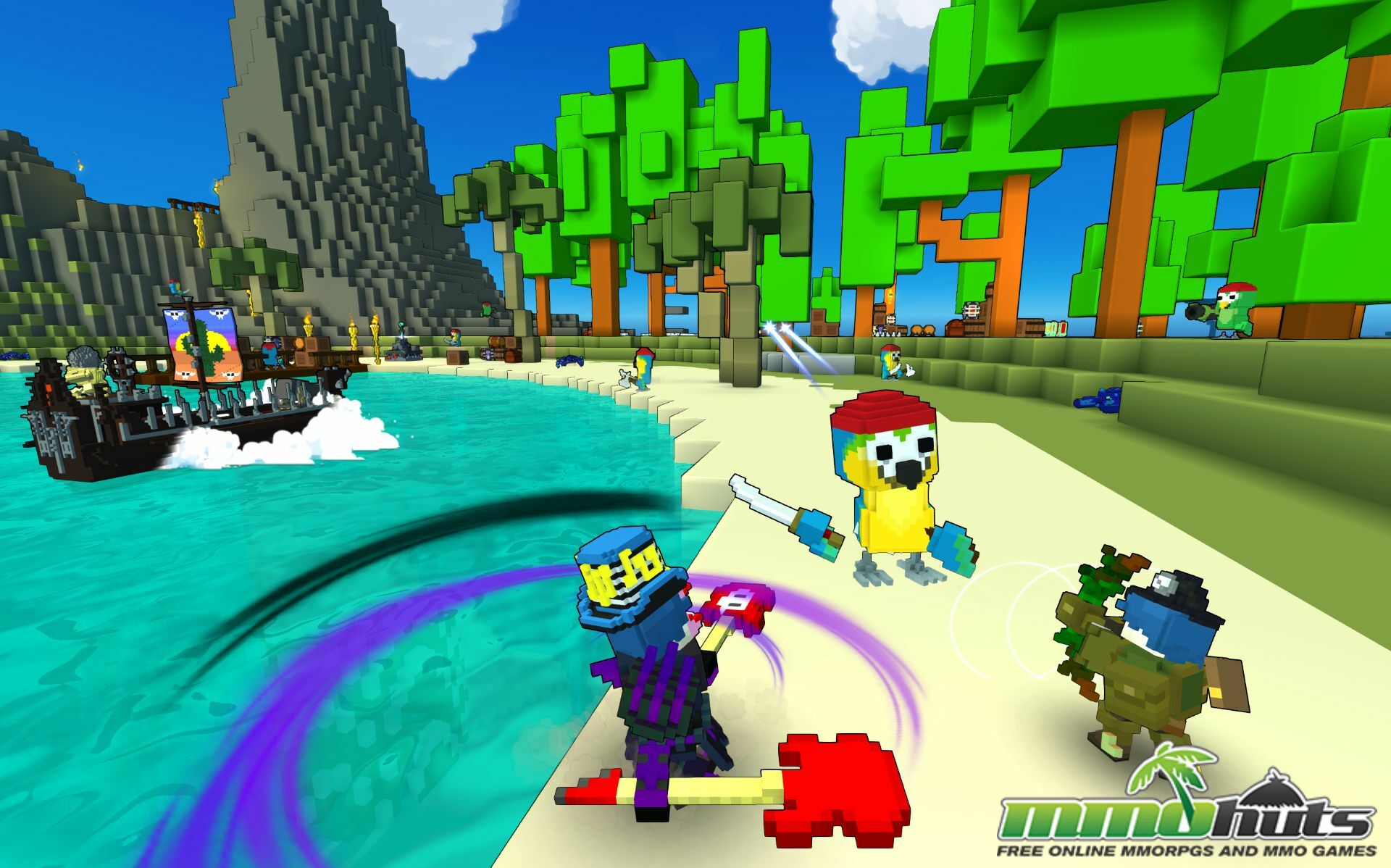 Nothing spells a good time like knocking your friend's block off in PvP.

Probably the most interesting, at least for me, feature that is in-store for Trove has to be PVP. Obviously Trove already has a fantastic formula for great gameplay, so the PVP probably won’t factor too much in the grand scheme of things. However, the work-in-progress PVP mode that was described to me sounded amazing. The key words being “work-in-progress.” So what I describe could very well be completely different than what appears in the game.

You’ll travel to a realm that offers free-for-all combat amongst players, but there will also be PVE content to participate in as well. As you fight (and win) against NPCs and players, you will gain Bloodshards. As you gain these Bloodshards, you will grow in power but also become a target for other players who want your Shards. Eventually, you will feel yourself strong enough to take on the mega-boss at the center of the map, the Blood Dragon. However, your strife won’t end there. As you’re fighting the Blood Dragon, a message is sent out alerting other players to what you are trying to do, meaning that you will more than likely have to worry about players try to kill you, stealing your hard work in the process.

Conclusion
In case it isn’t obvious, I am impressed by how far Trove has come. It was already a fun game when I last played it, but it’s evolved so much in that time. I will definitely be coming back to the game at release – I’d be insane not to. What’s even better is that Trove can be played how you like it. You can spend either fifteen minutes or five hours in the game and still enjoy yourself, and on top of that, it’s one of the best games I’ve found to play with friends. If you haven’t already, I would say download the Glyph launcher or boot up your Steam. You won’t want to miss the initial player rush insanity! You won’t regret it, I promise.