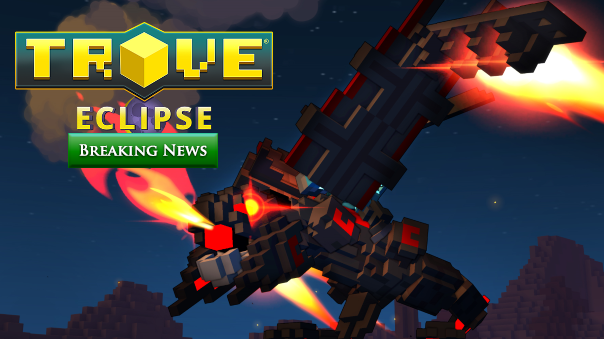 It’s that time again where we talk about my favorite building game, Trove! This time I’ve chatted with Robin Luera [Lead Art Designer], Ted Sanger [Lead Animator], and Rick White [Producer], and we discussed the changes coming in the Trove “Eclipse” update. This one’s an update I’m excited for in particular. There are a few really big highlights that we’re going to hit here, and while there aren’t huge mountains of changes, rest assured that every one of them is important and positive for the game as a whole. These are the high points that we got into on this interview. 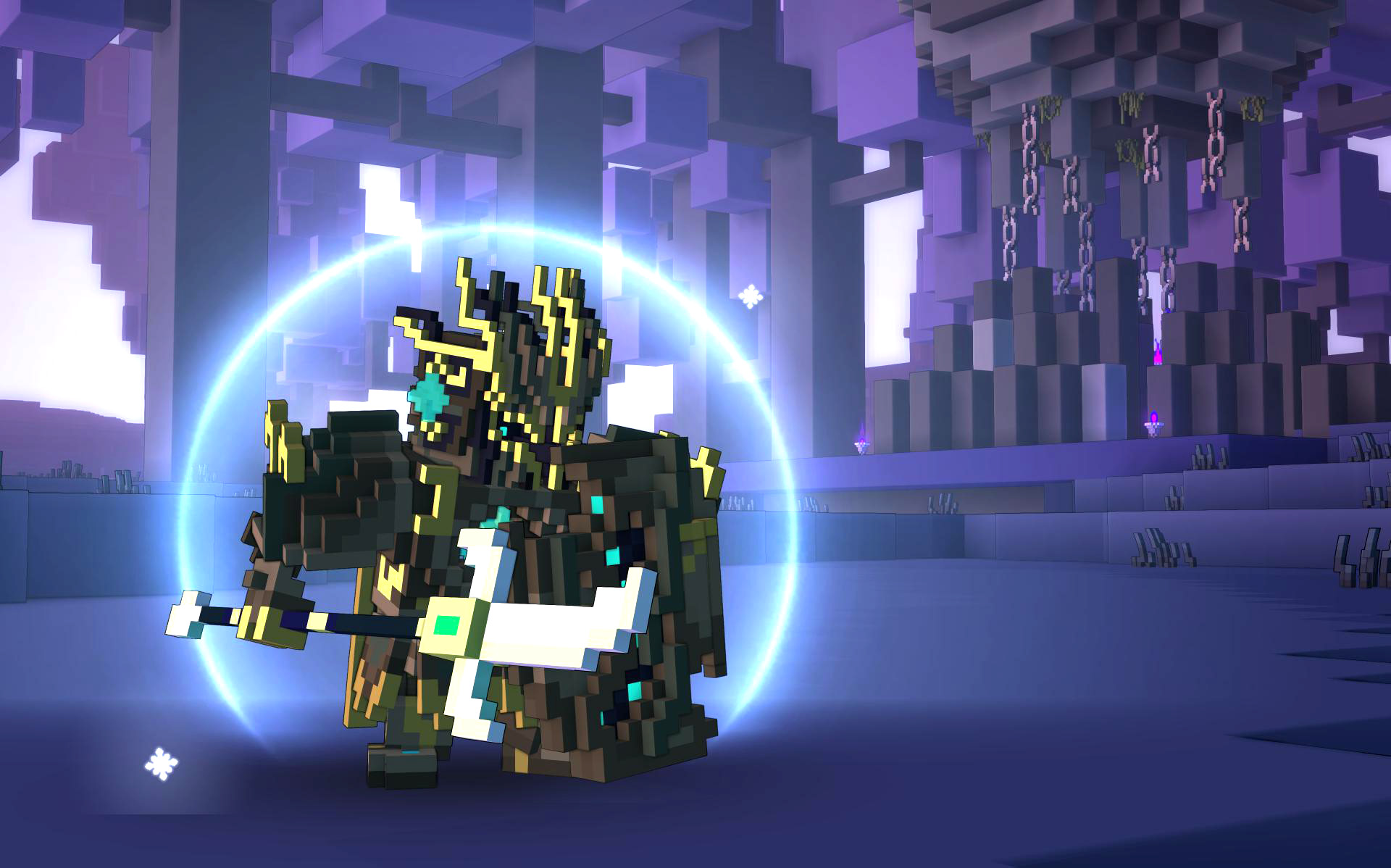 Sub-Classes are going to change how you view your role and how you play the game in a positive way.

A game with so many varied and interesting classes, I’m surprised that this didn’t happen sooner if I can be frank. But it’s coming, and it’s a pretty cool system! When you reach level 10, you can choose one of the classes you own and turn it into a “sub-class”. When you do, you gain a passive ability as well as a stat increase. Each class offers its own ability/stat increase and each one is worth it. But what you will need largely depends on what class you main/primary, so there’s a lot of experimentation and fun combinations that can come into play here. An example: if you main the Gunslinger and you choose Candy Barbarian as the sub-class, it will increase the attack rate as well as movement speed. It also has a chance for a candy drop that heals, which can be useful on classes that don’t have a heal ability or in a pinch if you say, run out of potion uses. It’s a fun system that lets you customize your character the way you want to play, and can motivate players to experiment/play other classes to 30. This is because the power/usefulness of your sub-class is dependent on what level it is, so you’re going to want to level lots of classes to 30 to get the most out of it. It directly reflects how strong it is, so the higher level it is, the better off it’s going to be.  It’s also important to note that sub-classes are not active in PVP, and you can’t sub-class the same class, because that wouldn’t make any sense. Nor can you change your sub-class while in combat.  Each one of the buffs you get is important/useful, and I was looking for potential buffs for myself as a Lunar Lancer. I’m looking to combine it with Boomeranger. 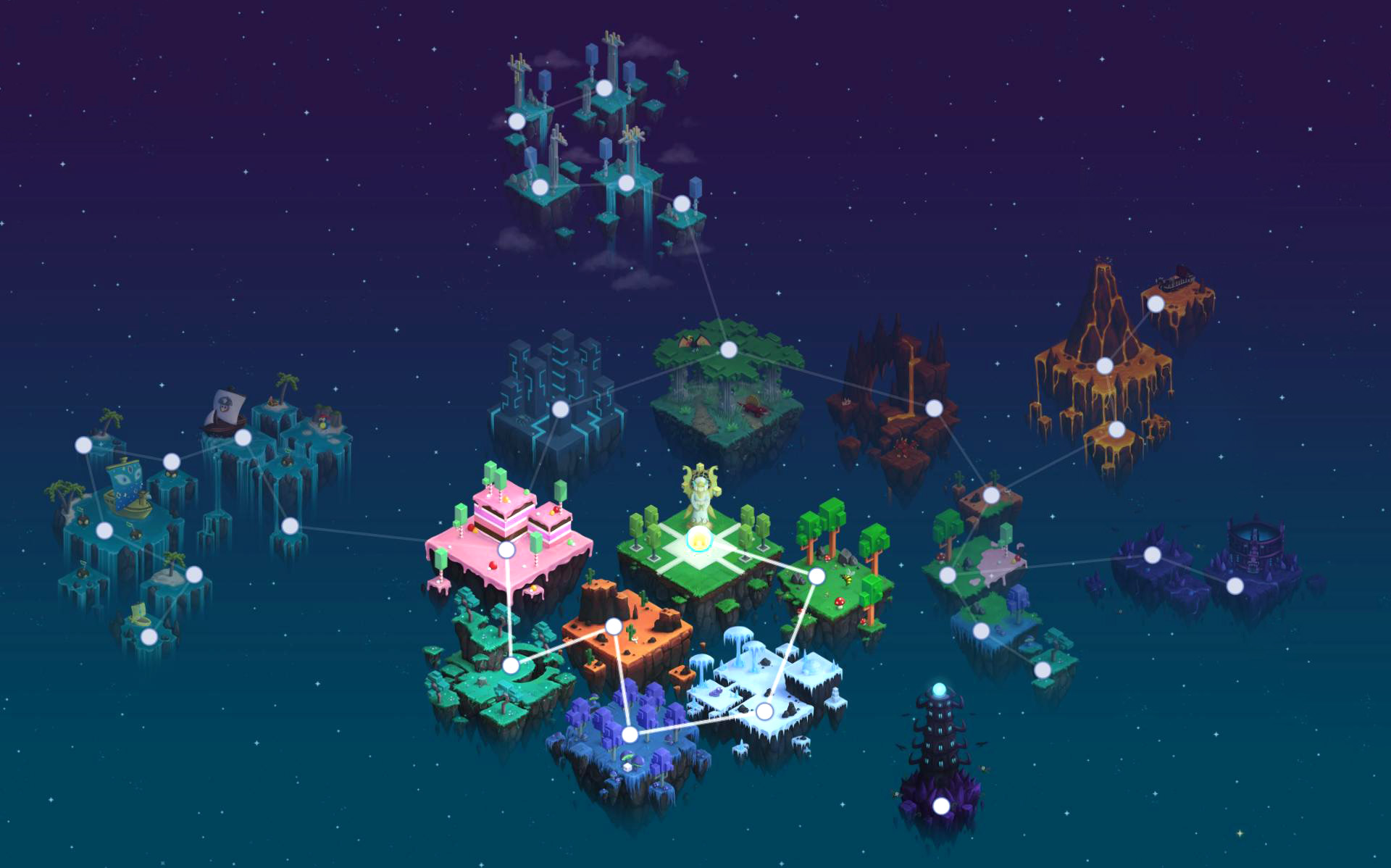 I hated that damn tower.

I’ve never liked the tower. I fall off it all the time; anytime I’m on a mount, there’s a solid chance I’ll tumble off and have to start over. I was never really 100% if the area I was going to was really the area I wanted. It was a cool idea, but the Trove Atlas is a much better one. Now there’s a statue in its place, but the portals being the same color [from the perspective of a new player] it can be really frustrating to never know which one you should be journeying to. So the UI Artist was asked if they could do anything they wanted to change it, what would it be – and the end result was the fantastic Trove Atlas. It’s a visual way to represent all of the various adventure worlds you can go to, what’s in them, where they are in the grand scheme of things. It shows you what you can go to, and that ought to help with figuring out your next grand adventure. The map stays true to the path you walked previously, but it’s just a lot clearer. It feels more like a large single world now, instead of just a bunch of portals. The areas that you don’t have the Power Rank to get to will be a bit more subdued, a bit darker so you know that it’s not an area you should be exploring quite yet. There’s also a tower on the map! A tower that has a bit of darkness to it… Something like … a Shadow Tower? 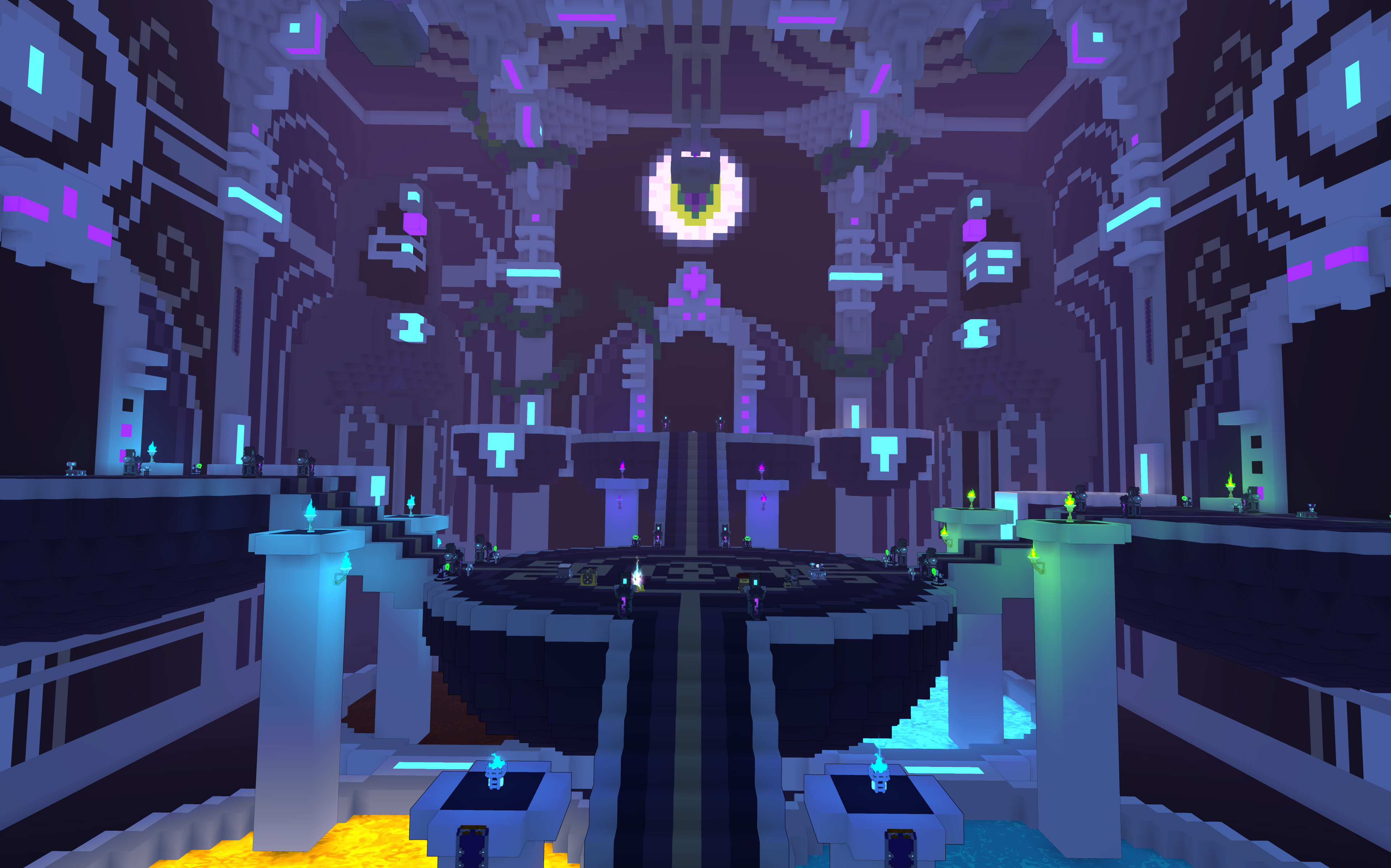 This is a fancy lobby. This makes it so much easier to group for adventure!

The Shadow Tower is a focal point of this expansion/update, hence the “Eclipse” name. There are lots of changes coming to the Shadow Tower, such as the Shadow Tower lobby. It’s only accessible via the Atlas right now. You can still get to the Shadow Tower via portals in your clubhouse, but they will not take you to the Lobby. This will make it a lot easier for players who are not in huge clubs who do frequent runs, to explore this content and make new friends. It has three portals, and once you’re in the Lobby, you’ll be in an actual Shadow Tower chatroom to find people to party with. In addition to the Lobby, there are two new levels/bosses in the Shadow Tower! These will take place right before Daughter of the Moon. So we have Spike Walker, Weaving Prophet, Pinata, and next is the Shadow Hydraken! This is probably the most incredible boss I’ve seen in the game yet. It’s community created and looks like it’s going to be a blast. It’s a gigantic Hydra, with lots of moving parts and mechanics to be aware of. It feels like a legit raid boss to me. This boss, however, is stationary, but it’s gigantic. It has large pools of lava/acid that start off doing minor damage but scales quickly. There are also lots of little adds that you’ll want to have someone dealing with ASAP. As you dole out damage to it, the heads fly off, and it gets more and more frustrated and will change the patterns around.  Finding a safe place to stand is so very important. He rampages at low health and will suck the players in, making it all the more important to have teamwork.

The next boss is “new Pinata”, The Dreadnought! You can’t get it in a corner [he constantly leaps back to the middle], and it’s a massive, glorious battle. What’s unique about him are the shields around him. When he has a purple shield, he’s immune to magic, and a yellow shield indicates that he’s immune to physical damage. So you have to juggle the battle and figure out who is going to do what so you spend large chunks of time doing nothing because he’s immune to everything your team can do. You’ll definitely want to have a nice balance of players because while you can bring all physical or all magical, it will take a lot longer. He has a blend of melee and ranged attacks, requiring you to think on your feet. One of the things I brought up was a potential group finder because that’s one thing I definitely think Shadow Tower needs. But that lobby will help as a temporary/simple solution to the problem of “finding lads to do content with”, and while I’d like to see a group finder to just pair people up and do dungeons/Shadow Tower levels, I do appreciate this being added to the game. 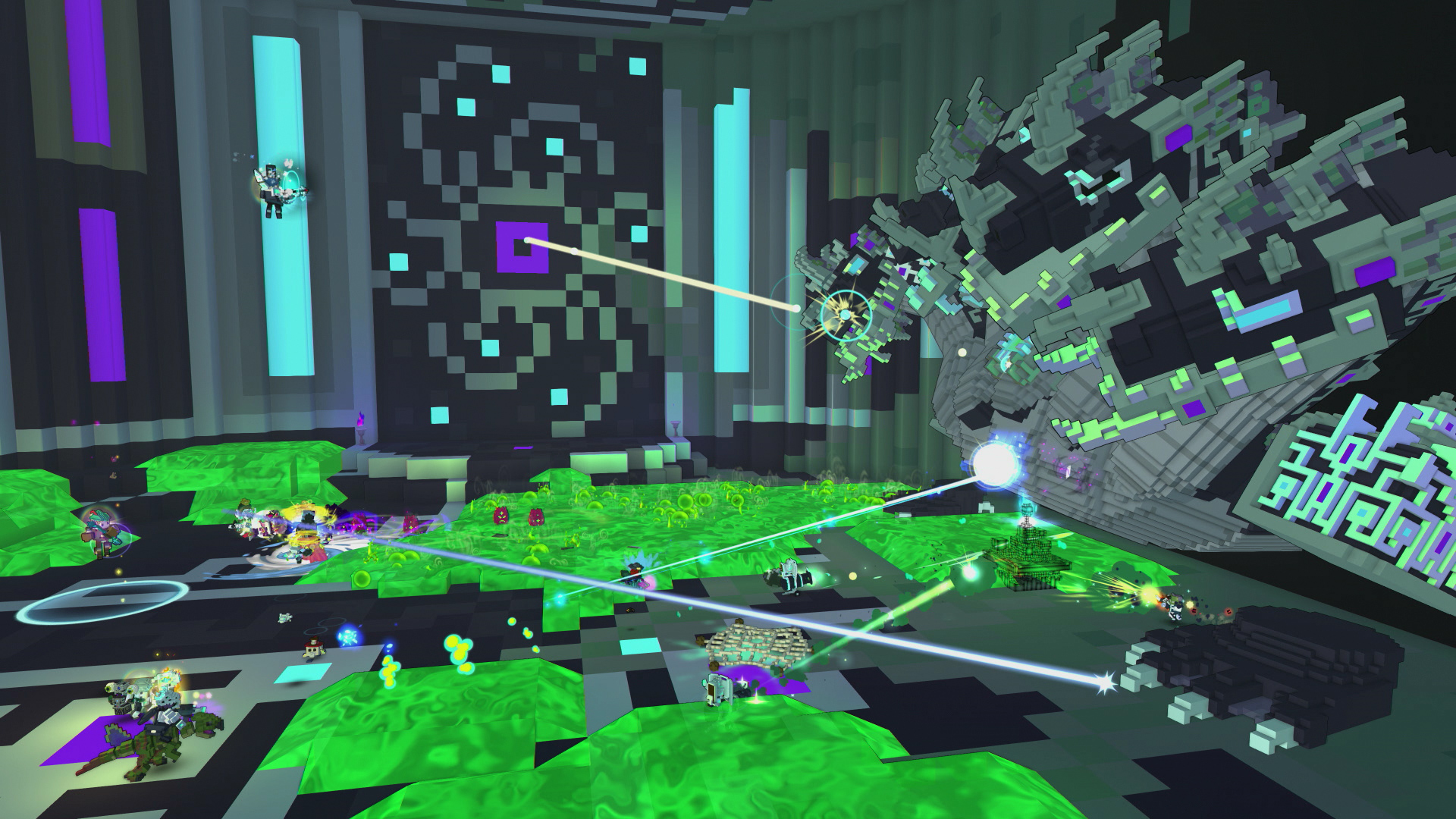 The Lobby is a great step in that direction. Shadow Chests have also received a bit of a change. The way things worked previously, you defeated a boss, got a chest, opened it, and got some random stuff. When you get your key fragments from the Prime Worlds [shadow, moon, eclipse], those will open the chest and that’s how you’ll get Titan/Lunar souls, no longer from boss battles. The eclipse keys can open any of the chests, Moon will open normal/hard, and Shadow will only open normal chests. You still have to farm the keys in the world, but the drop rate was adjusted so it’s a bit easier to get them now. There’s also a new material called Despoiled Divinity, with which you can buy the new costumes [for every class] which are very shiny and fantastic. There are also new mounts, such as a very cool new Dragon. Also, the enemies in Shadow Tower have been retooled slightly. You’ll see a few more Elites, which will offer up the Shadow Shards used in making Heart of Darkness [which is still being utilized].  You’ll want to spend less time rushing through and ignoring stuff! 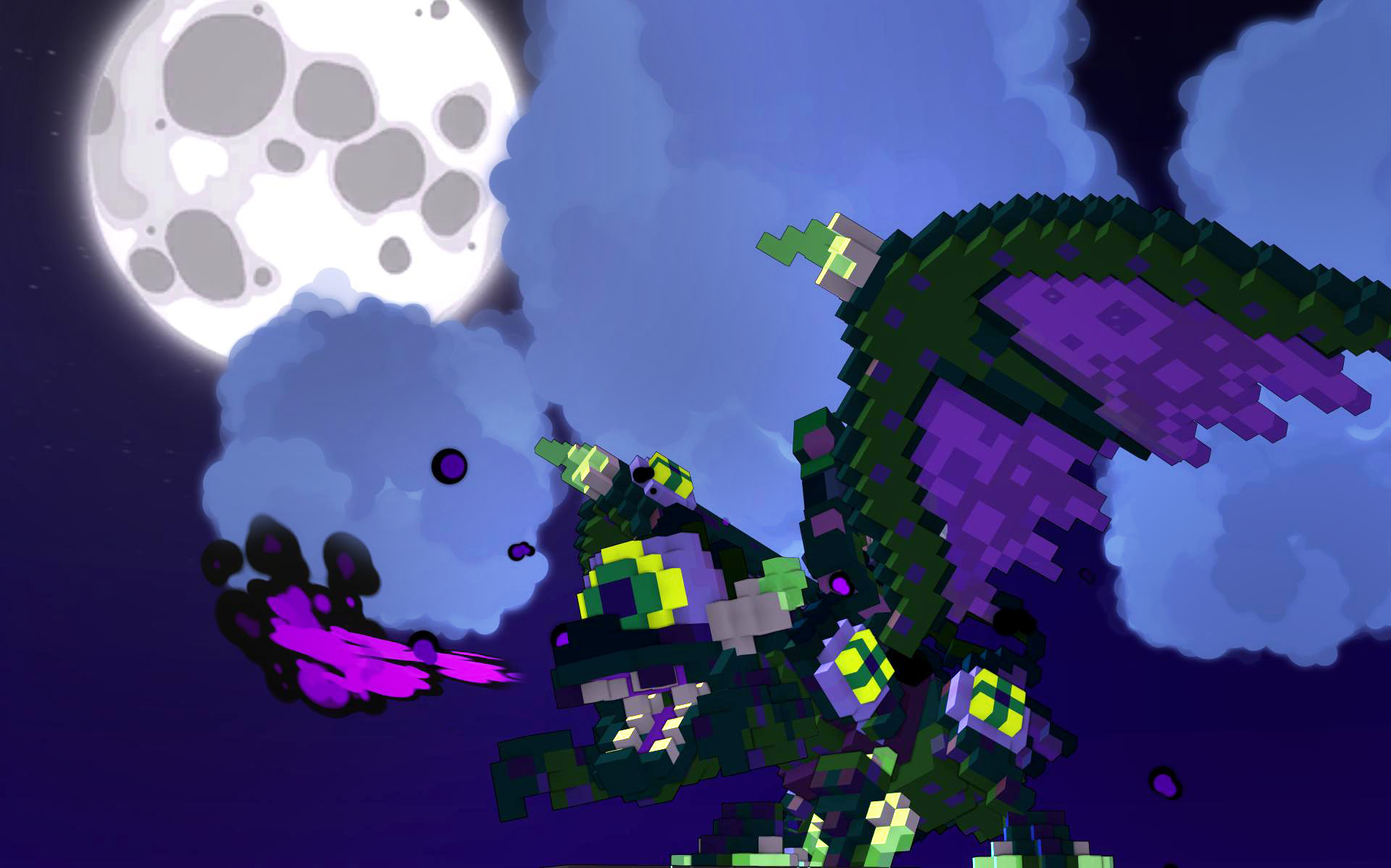 I don't have a screencap of the Reforging System; instead, have a cool Dragon!

I was looking forward to this for quite a while! Now you can look at your stats, see what percentage you were given, and increase that percentage. Say a Gem has 56% of the Maximum Stat it could have had; knowing that, you can work on reforging gems to increase that number. You acquire resources for it to increase the stats by various degrees. You can reroll whichever stat you want on it, so if for some reason you decide you don’t want Crit [why? Crit’s amazing. Don’t be bad] you could reroll it and have a shot at a more useful stat [what’s more useful than crit?] Or if you don’t want Maximum Health, you can reroll it and try for something else. Also: Health Regen is going away on Gems! You can reroll it on gems that already have it, but it’s going away. You could keep one for nostalgia’s sake, but I probably won’t. I have a lot of gems like that and it’s time to put a useful stat in its place! You won’t get double of a stat, and you’ll never get the same stat that you already had on the gem. Even if you can’t equip the gem, you can still upgrade/reroll them, and socket it when the time comes!

You need Focus [Foci] which are on the Adventurers Forge, which requires Bound Brilliance. These come from the Daily Quests. You can also get these from the Boons [from your daily login coin], and you can get them from Events. There’s also a handy Bound Brilliance Tome, so if you level it up it can be incredibly handy. They won’t be easy to get, but it will definitely be worth spending time on if you have a few gems that are almost what you want them to be. One of the popular questions is “Why is this expensive?” and the answer is that it feeds directly into your Power Rating. It’s not RNG related, it’s always a positive increase to power. They don’t want it to just be an easy path to becoming more powerful. You have to work at it. “Chiseling yourself to greatness,” says Robin. Spending time in the world exploring will definitely help you on this path.  All told, this is a great expansion and while there are only a few things in the update, but as you can see, every single one of them is a huge deal. I’m really excited for a lot of this and glad to see it coming to console and PC at the same time.