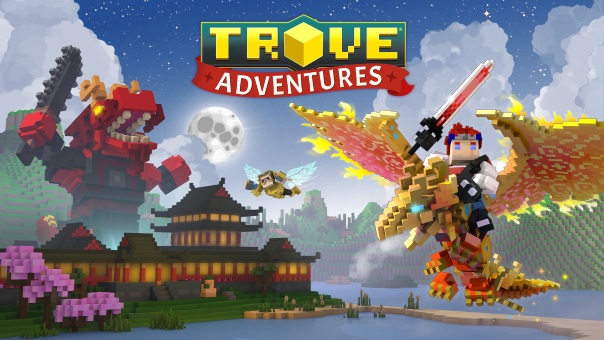 Yesterday I had the opportunity to sit down and chat with Trion Worlds’ Ted Sanger and Robin Luera, who both work on the MMORPG Trove. We talked about an update that’s coming to the game on November 14th, the Adventures update. There’s a lot coming to the game, such as a cleaned-up UI for Clubs, more Club-Related goodness, and (my personal favorite) a new Biome! The last update was more focused on end-game content, but this is to add more systems to incentivize players grouping up and well, having adventures. That’s what Trove is all about: exploring, building cool stuff, and going on fun adventures with your friends. One of the downsides for me is that I do not have a huge club to be a part of. Our personal club is a little on the small side, but you can still do this content without a club; you’ll just be contributing to someone elses’. Hopefully, this will get people more into the Club aspect of the game and have people making new friends in this colorful, block-filled world.

The Club UI has been revamped, with your “Primary Club” on top taking up the most space (you can still be in five clubs total, one just shows up as your primary). It shows what your Club Level is (new!), the Experience Bar (how much Exp you’ve accrued for the club, how far you have to go for your next club level; cap of 10 right now), your Power Rank for the club (averaged from the top 50 players in the club) and how many people are online! It is cleaned up and very easy to read. This also shows a new currency, Clubits, which is a club-only currency. You use it to pay rent on new stuff in your Club World, which we’ll get into fairly soon.

In the Club UI, you can also see a new thing that was added in this update, “Fixtures”. These are permanent buildings that you can place in your Club World that offer new things, from buffs to adventure quests!  The first two, “Rally of Heroes” and “Trovian Clubit Union”, cost nothing to place and they look awesome! You can decorate and adjust them to your liking. Rally of Heroes lets you summon NPCs (3 at level 1, 4 at 2, and 5 at 3). Each of these NPCs has a cost, and a wake/sleep cycle. The rarer ones likely sleep more, but also give better quests/rewards. If you have permissions with Fixtures, you can set some to sleep if you don’t want them to be usable right now. As an aside, Permissions for Clubs are completely customizable now, so you can set who can destroy/build what (which I love. I’ve destroyed my club before). Another side note, on the to-do list at Trion is to be able to make your homes not destroyable by bombs! Boy, I’ve had to deal with that before … a few times … 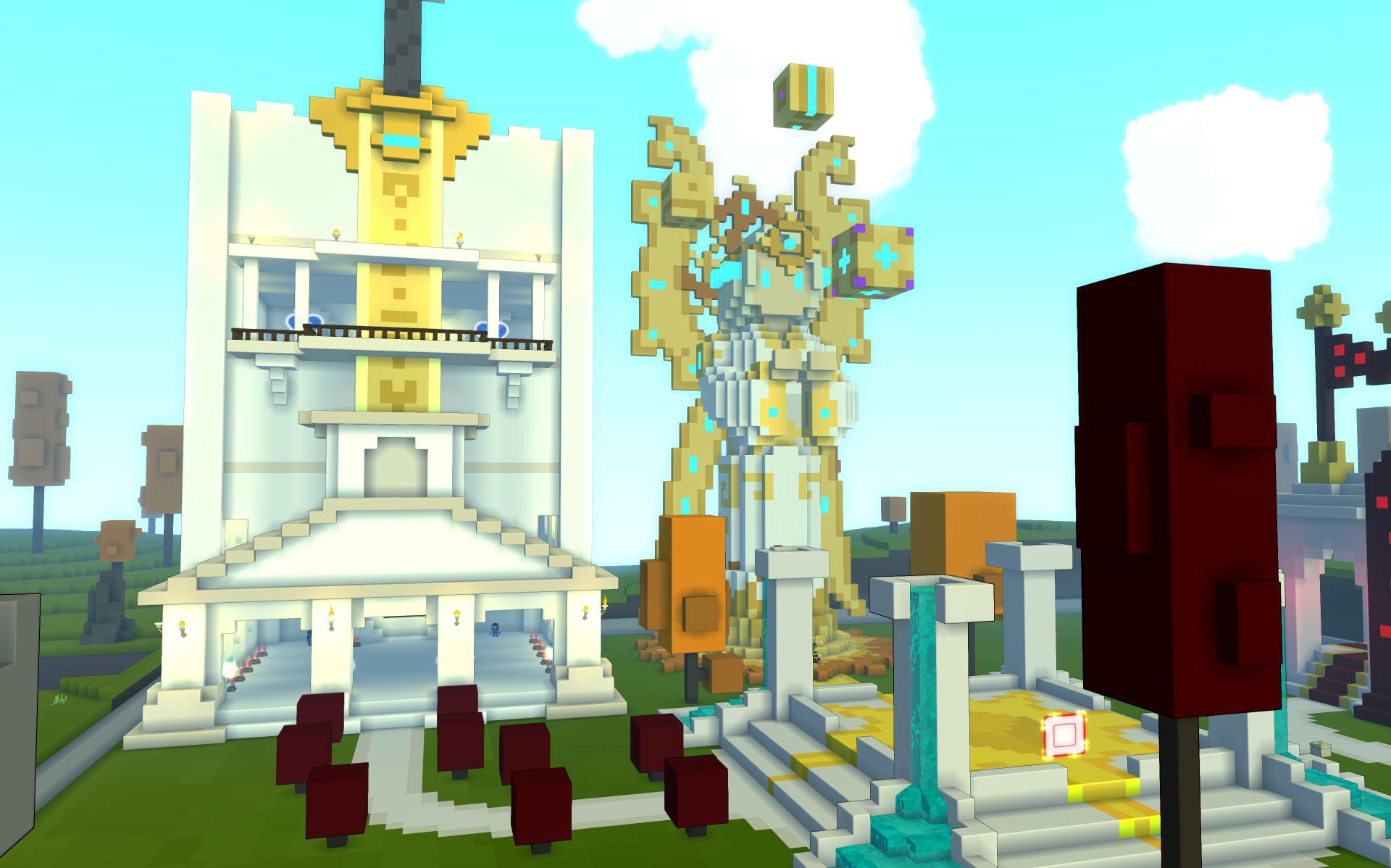 Behold: The gateway to many varied Club Words!

There are a total of 22 club NPCs, which give a variety of quests to undertake. Success gives your active club EXP and gives you personally a new currency, “Adventurine”, which can be used at the Union to cash in for Clubits for the Club. The NPCs each have their own rarities, and there is a fixture you can place (Heroes of Repose) to increase the chance of rarer quest NPCs. You’ll see an aura around them (Green, Purple or Orange) which denotes their rarity. The great thing is that anyone can come into the club and take these adventures on, and the Club will get experience. Only people who have that Club as their primary will gain benefits from the Club World though.

The “Trovian Clubit Union” is where you cash in your Clubits, and the Club President uses the Clubit to rank up items and to pay rent on these fixtures. The more fixtures you have, the more the rent is, so this definitely fosters your Club working together, and adventuring, whether solo or in a team, to get the rent paid! The rent is due on a weekly basis, and it can get expensive. So you’ll have to balance on what benefits the Club the most. In addition to those larger buildings, you can also place Shrines (Skill, Ferocity, Vitality, Rejuvenation, etc) that give buffs to everyone who has that Club as their primary. If you worry about it costing too much, there are things you can place in your club to lower rent costs as well, so if you really want those buffs, it’s within your reach. Some of this stuff can be a little pricey on the Rent, but with an active club, it should be easy enough. Once you’ve upgraded a Fixture, it stays upgraded, even if you take it down and bring it back later. Also, you don’t have to pay rent on a Fixture the first time, that’s factored into the cost of bringing it into the Club World.

The Hub World also has a new building, the “Club Headquarters”.  It has four floors, but only active clubs will be visible here. People have to be active in your club to be seen here. The first floor primarily has portals for Clubs that recently dropped NPCs/new quests, so you can see what’s new and exciting and these portals will drop you right at the Adventure Tower. The next floor is for Club Worlds with the “most likes”, but still must be active to be here. The third floor has Blue Portals for “recently added Fixtures” and Yellow Portals are for “Most Powerful Clubs”. The most Clout, as it were.  No Club can be seen on a floor twice in a row and will have to wait three days be seen again. There’s also a merchant where you can purchase new mounts and stuff with Adventurine, but the big draw here for me is the LED Blocks! Yes, glorious LED block recipes. The block blinks on and off at set intervals, and there are three types of each color. They either are always on, blink on one-second intervals, or three-second intervals. They are so amazing! You can turn them on and off also. I need these for the floors of my home in Trove. In addition, there are new structures called “Frameworks”, for someone who just wants a quick, down-and-dirty structure for their Club World. The recipes have varying sizes, and you can make a Castle and so much more. You can rotate them, they’re modular, so you can build on top of it, replace stuff in it, however you like. They are mostly for Club Worlds, but there are some for Cornerstones also, if you want one! You get them from Recipe Lairs, which make those definitely worth doing. These Towers are huge and glorious and there is a Shadow Tower version (which I must have). Any blocks it doesn’t replace, it leaves there, so bonus! 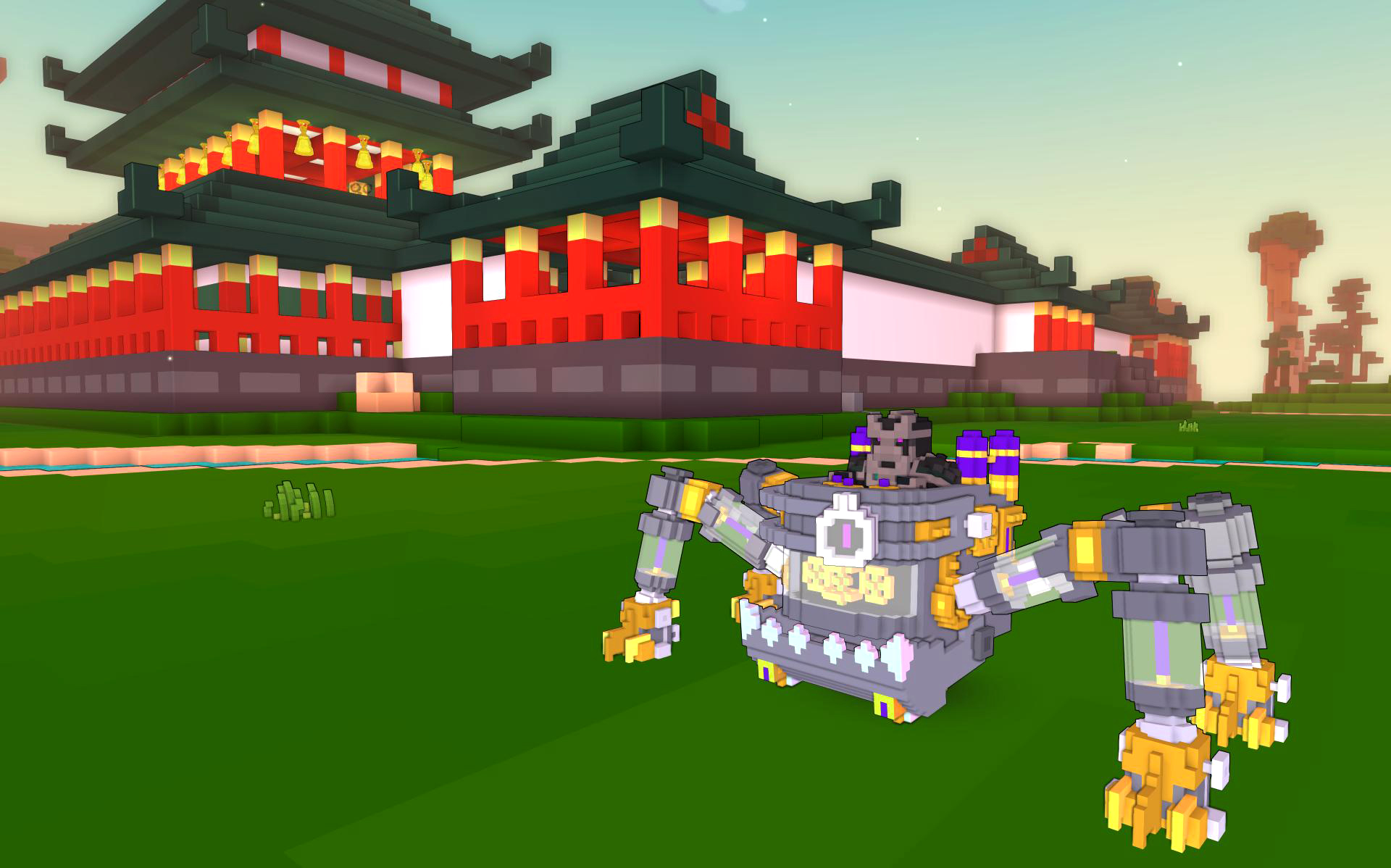 This new Biome is gorgeous without a doubt.

There will be a Golden Flux Dragon that shows up there on the first and fifteenth of every month on a platform in the Hub World. It will sell items that cost no more than 100 Dragon Coins, but it brings back items that players can no longer get – allies, mounts, wings, et cetera! So get those Dragon Coins! But there’s also a new land to explore. It can be found in the Atlas, of course, and is situated around Uber-6. “Forbidden Spires” is the new area and has Eastern theme. This locale has more detail than normal areas, and there are two areas within here. There are the Spires, and the more hilly, bamboo area. It also contains a new ore type, Cinnabar, and that is used in a new type of Ring. There are finally more than Shadow Rings! They’re called Radiant Stellar Rings and they require Cinnabar. These have definitely been a long time in coming. The dungeons look like Chinese Palaces, there are giant Hot Air Balloons, and my personal favorite: the Red Dragon dungeon! It’s a gigantic, Ultimate Shenron (for you Dragon Ball GT fans) stylized dragon and it floats in the air! You have to fly up to it and the portal for it is in the Dragon’s mouth. These dungeons are incredible, and so is the scenery! From the Terra Cotta Warriors, to collecting Fiery Feather Fragments (to acquire a gorgeous Phoenix Mount), new fashion designs for hats/weapons,  recipes for awesome lanterns, there’s a lot to do in this new land that has been added to Trove with this beautiful Biome.

There are some Mastery changes, too. The Mastery level cap is now 600,  but after 300  you receive diminishing returns (it becomes harder to level up). There are tons of awesome rewards that go into it also! Leaderboards also changed a bit. You no longer receive physical rewards for being on top of leaderboards (to cut back on that whole ‘rich getting richer’ thing), and they do receive a golden name. The highest PR clubs have been added, flawless Shadow Tower runs, World Bosses Defeated, Weekly Club EXP Earned, and Weekly Dungeons Cleared! Blocks Placed/Destroyed were removed because those promoted a very negative style of gameplay they want to steer away from, which makes sense to me. Being on a leaderboard just for placing or blowing blocks up seemed silly to me. Total Fish Caught was also removed. New Badges/Achievements are now in for Sub-Classes and Gem Upgrades were also added, which is nice, as well as Plasma Fishing! There are fish that can be caught that give Mastery, and a final interesting note, Knight has also been adjusted!

This is an exciting patch for Trove, and I really cannot wait to get into the new zone, especially after getting a nice guided tour of it. I think it will promote togetherness and adventuring in a group, which is something I think Trove might have been lacking, just a little bit. And remember, this is coming on November 14th, so get excited Console and PC fans alike!