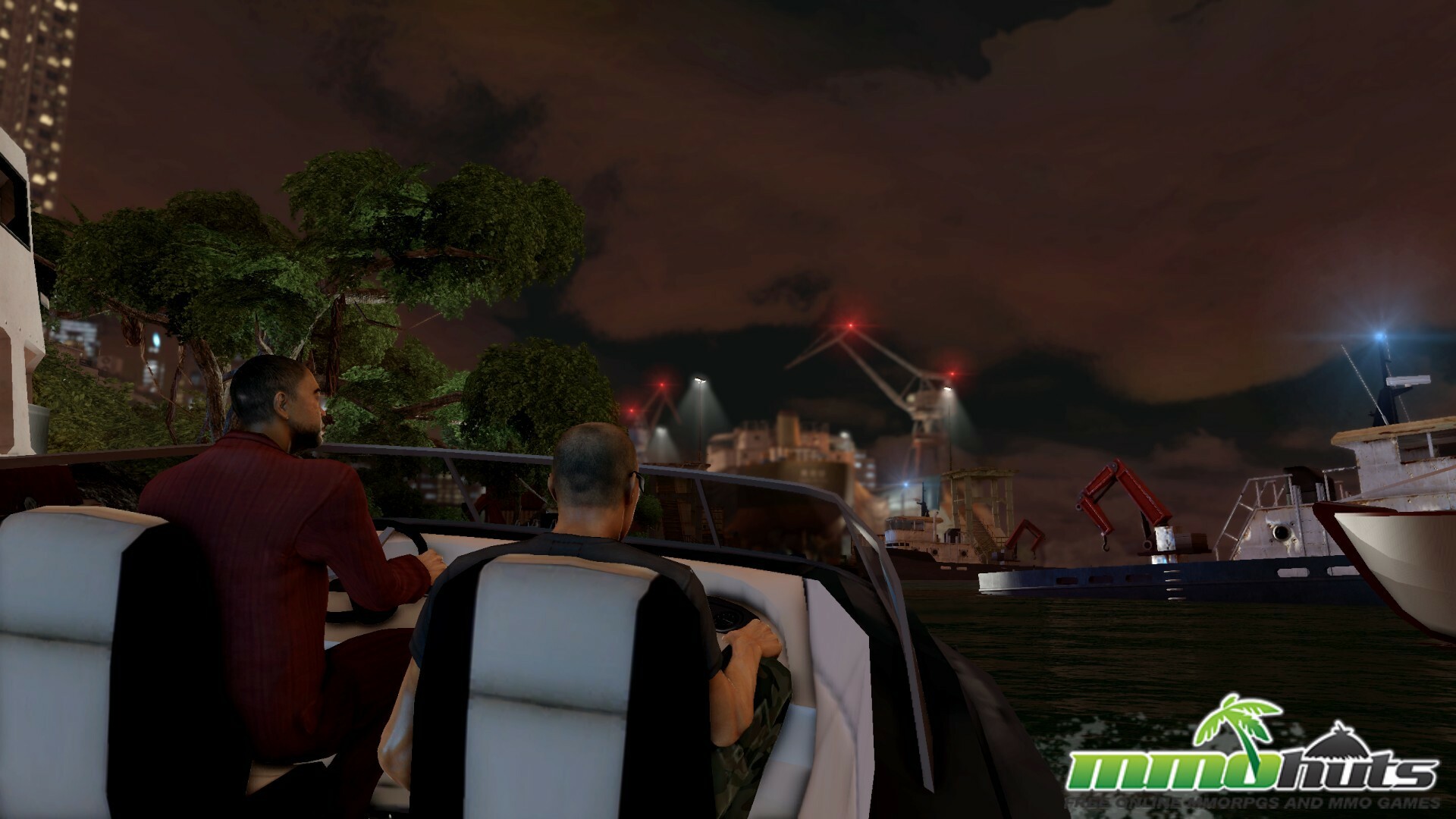 United Front Games rescued the Sleeping Dogs franchise from certain disaster (when it was lumped in with the True Crime IP), and made something truly fantastic. Sleeping Dogs, for the uninitiated, was known as True Crime: Hong Kong originally. It took around four years to get Sleeping Dogs on the market, but despite what many critics have said, it was a terrific look at crime in Hong Kong. It’s action packed, the slow-mo takedowns were amazing, and it shows off the Triads in a pretty spectacular fashion. Triad Wars is not a sequel, so much as it is set in the same universe, with the same Triads/Events unfolding. Triad Wars is easily one of the most unique online games coming to the market in that it is an online, PVP game, but you do not actively play against the other players in real time.

Admittedly that was one of my big worries. I figured going in this would be one of those games where I would set up a nice hideout for my character, build my empire, and leave it alone for a half hour, only to come back to see it all destroyed because I didn’t buy a cash shop protection charm. Instead it takes more of a Mighty Quest for Epic Loot approach, in that it plays out as a strategy game when building your hideout, and a half shooter action game when raiding others. Thus the layout of your hideout, your NPCs and guards, and your enforcer will determine how hard of a time attackers will have. 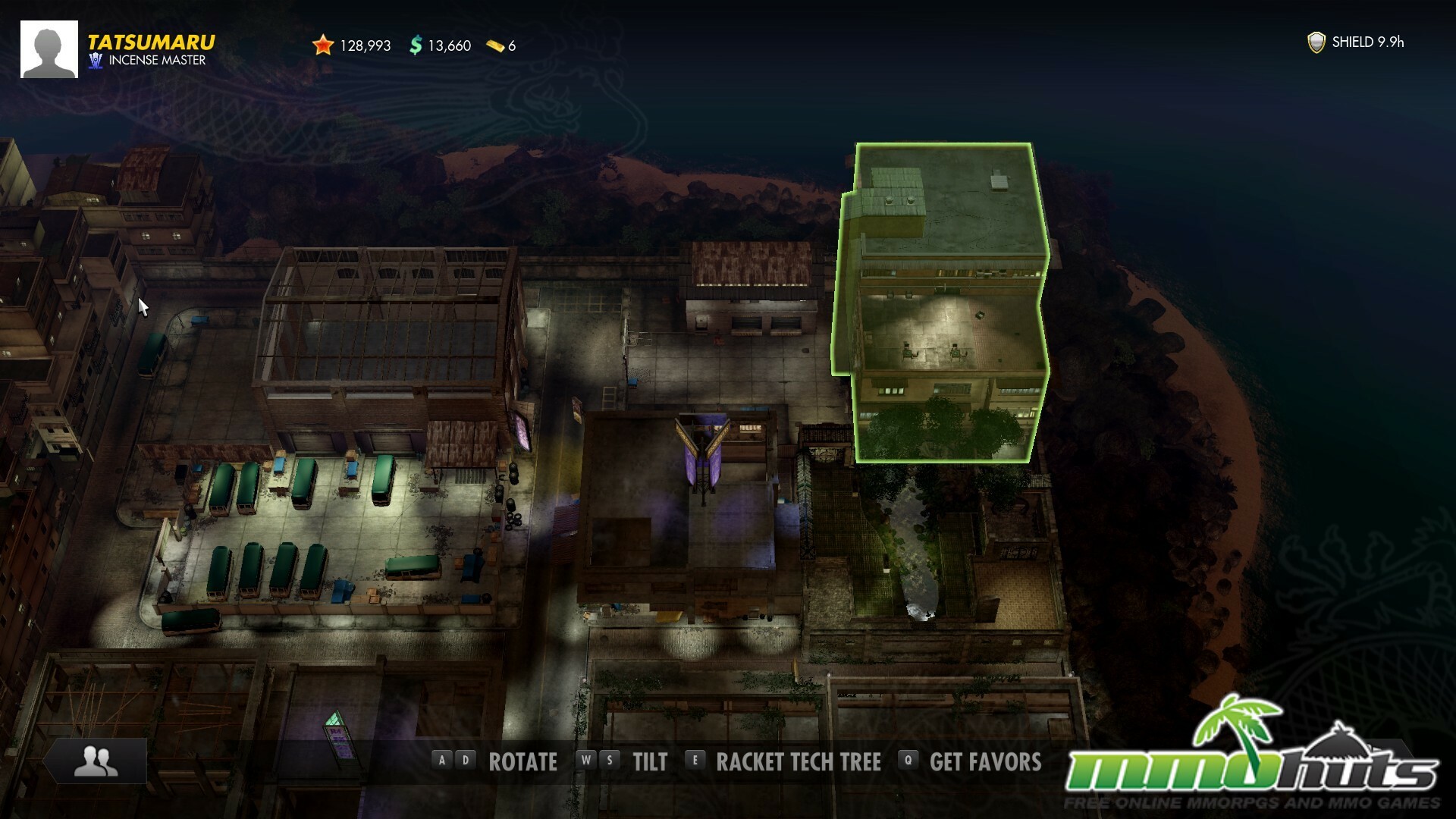 Going in I feared this was going to be Game of War in the Triad.

My skepticism was quickly dashed as I got hooked on the tutorial alone. It showed off all the important things you need to see in the game. Driving/shooting, setting up and succeeding in a raid on a rival Triad, and starting your own territory up, thanks to your “Uncle David.” Everyone must have an Uncle David in Hong Kong. . . that kind of irked me, I was hoping it would have a different name for other characters, but I kind of see why; it is an MMO anyway, so concessions must be made for playability. But you do work against other Triads/Rivals (and in character creation you join one of the three major Triads to work for), raiding their territory and building your empire of crime, using whatever illicit activities you choose to go for. Of course you have a Safehouse, where you can perform tasks like Money Laundering (turning cash into gold, which can be used in the online store in a variety of ways. I feel like it’s also important to note that yes, gold can be used to buy clothes, cool fast cars, and packs of cards that give you a variety of useful boosts and abilities. But fear not! This is a f2p, not pay-to-win. You can accrue gold through in-game play to buy the cars and clothes with, and items like favors can be gained through play as well. So far not!

You can buy items on the Black Market, and attempt to flip them and make even more money/face by Exporting them. This is quite risky, as you might not even make back what you invested; that’s a distinct possibility, but it is definitely a way to move ahead in the crime world. Remember, this is a Crime game. You’re going to do bad things to people that probably don’t deserve it. But I’m willing to bet some of them do. One thing I did inquire about was the notion of “How will I know if I’ve been raided?” You will see your face number be lowered, and there’s a bar on the right side of your screen that informs you of recent happenings you’re involved with. If a player raids you, you lose less if it’s a lower tier raid (1 star versus 3 star). And if a player raids you and fails, you gain face, so that’s definitely a positive. It won’t ruin your whole empire to be raided, and honestly you should expect it to happen. Someone’s going to be on a map with you and be just as hungry to get ahead on the leaderboards. I’ve been throwing around “Face” a lot. But what is it? Face is dignity, pride, honor. It’s how and where you stand in society. It can be gained, lost, and given. 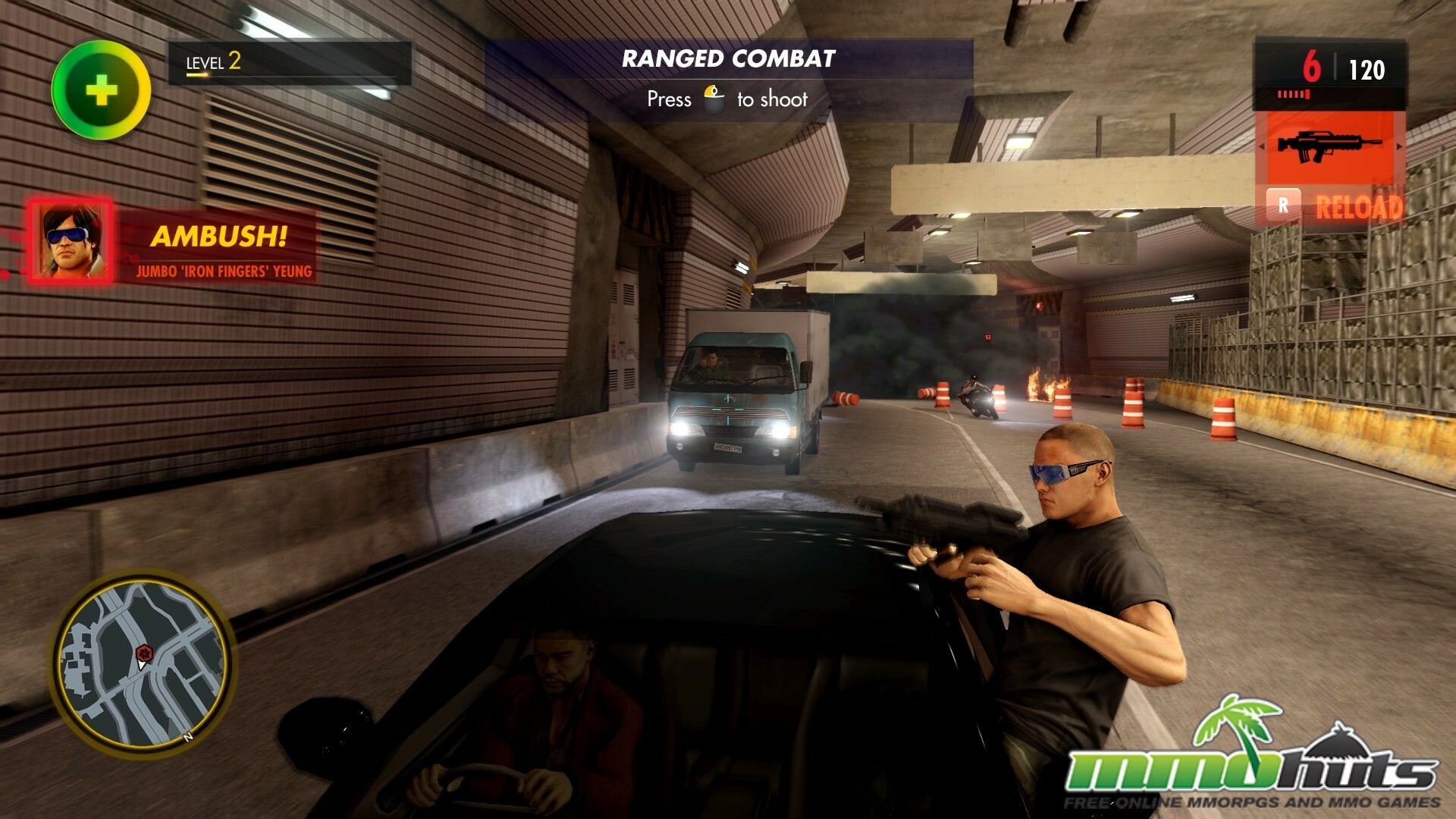 When losing face, uzis do wonders for negotiating.

What sorts of things can you do in Triad Wars? Other than raiding other players, stealing their hard-stolen gains, and making them your own? You can terrorize innocent folk by driving around and shooting them, steal cars, fight against the police (or run away from them! I highly recommend that), and drive around admiring the beautiful city that has been built. There are missions too. You can stick people up, hustle other gangs, convince people to keep their mouths shut through violence, you name it. There are a plethora of shady dealings you can get into, in your headquarters or not. In your HQ, you can set up buildings dedicated to dealings like Counterfeiting, Extortion, Gambling, and Smuggling. Each of those has specialties you can work on, such as Cockfighting, Pork Bun Vendors, and whatever else you do in Hong Kong that ticks off the cops. There are so many cool things to do, and as your base of operations grows, the options keep rolling in. 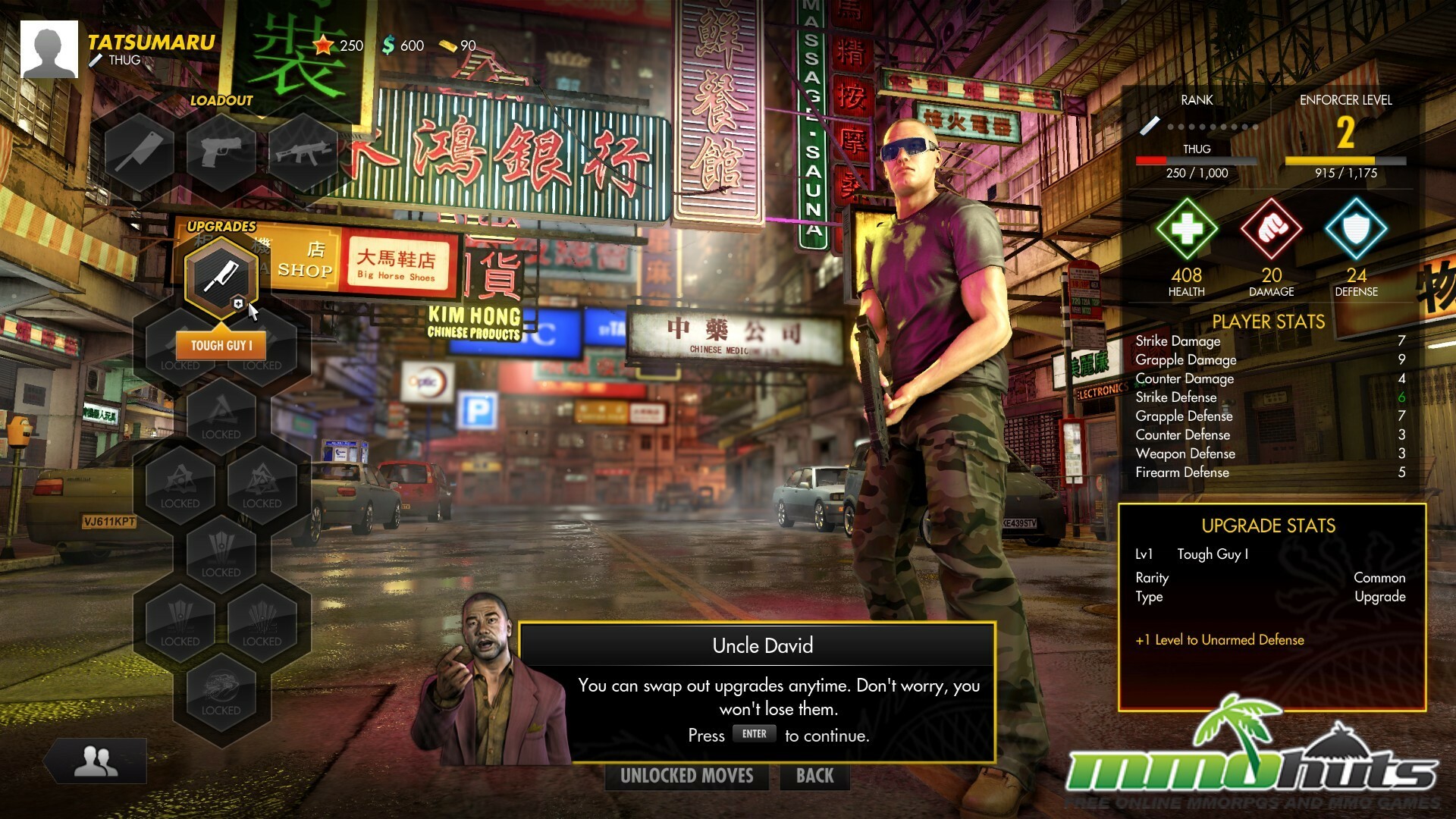 Trust me? You can trust me not to stick a knife in someone that pays up on time.

So far, I’m focused on Extortion, because my character just… kind of looks like the type of thug that goes around waffling people with a baton for money, or to make sure they don’t snitch. These buildings in your base can be upgraded, and also turn a profit that you can click on for more cash. It happens in intervals, so you can come back later and get more money! The higher tier it is, the longer it will likely take.

Honestly, Triad Wars is a refreshing change in the Multiplayer world. It’s got all the fun things that made Sleeping Dogs/GTA style games fun, with PVP that isn’t going to force you to stay online 24/7 to make sure nobody gets at you. Now that the game has most of its planned launch features implemented in some form, they’re even branching out to start introducing fun holiday events to net you rare rewards (such as the Halloween event I’m going to cover next week!) It’s action-packed, it’s pretty violent, the dialogue is in the native tongue between characters, but thankfully folks like Uncle David speak to you in English so you can understand the narrative/current situation in the game. And it has full controller support! It’s okay with a keyboard and mouse, but this is definitely a title I want to play with a controller in hand. Makes driving infinitely better, I won’t lie to you. Driving on a keyboard is absolutely damn insane. It’s currently in beta, but another thing I want to point out, is that it’s not going to wipe. Players who get in to the beta phases get an early start, sure, but do be aware that it’s not going to pair level 1s up with level 25/6s. No, you’ll be on a map with people that are your rank, so things will be pretty balanced. Triad Wars is a seedy, shady, explosively violent game; just the way it should be!

Want to check the game out for yourself? Jump into beta today or check out our livestream with the devs later today at The Bottom Tier!