Jagex invited us to a reveal event in San Francisco, CA for their upcoming game, Transformers Universe. 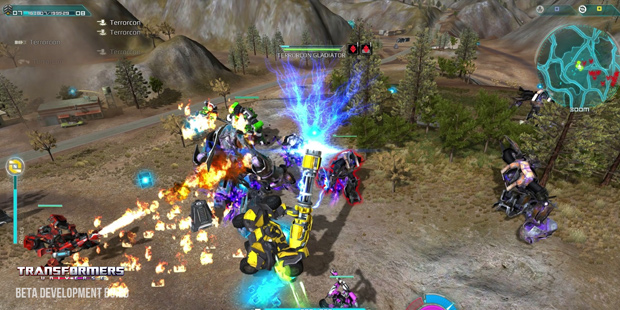 Transformers Universe is a Free to Play 3rd Person Multiplayer Online Tactical Action (MOTA) game following the Transformers-Prime timeline. For those still curious about the meaning of MOTA, it can generally be summed up as being very similar thematically to MOBAs, but they provide another axis of player movement, have more reinforcement and support elements, and Transformers Universe’s 3rd person view includes an adjustable camera.

At the event we were shown a presentation that demonstrated solo-play mechanics, the central Hub area, the Hanger, some Autobot introductions (Front-Line and Meltdown, respectively), and a recorded 4v4 player match – shoutcasted live by Jagex’s Chief Creative Officer, Alex Horton, and Brand Director, Tim Hodges.

Starting off with the solo-play elements we were shown, players will be able to choose any Transformer from their available roster to free-roam in an open environment outside of their faction’s current base. We were shown an Autobot roaming around a Colorado mountain range; it was explained that the Autobots are currently lying low in an old mountain military base, but this was subject to change as “seasons” of the game progress. The area outside of the base was large and hilly, and acted as a demonstration area to show off the maneuverability of a Transformer in primary (vehicle) mode.

The general handling of Transformers in primary mode is loose and forgiving. The camera self-corrects upward and to the back of the Transformer as it moves around, like in a typical racing game, but it can be changed at any time manually with the mouse. Alex Horton explained that they aimed to make the driving aspect feel as fast and fluid as possible without alienating inexperienced gamers. 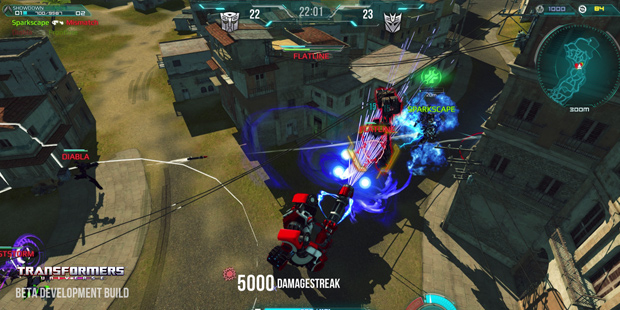 After some driving around in some hills we saw the Transformer, well, transform into attack (battle) mode – with classic sound effects and all – and jump into melee-ranged combat with some Terrorcons – whom are essentially serving as the game’s NPCs that are ripe for whacking about. Combat looks fast, vicious, and stompy with lots of visual effects, weighty animations, loud weapon blasts, and damage numbers popping up. As it turns out, a top-tier EU World of Warcraft Arena player helped shape the combat system, and it really shows. As far as we could tell, it was all tried and true WASD movement, mouse based primary attack and camera control, and a number-key based hotbar for abilities and skills. MOBA and ARPG players will feel right at home with the Transformers Universe HUD; minimap, healthbars, and floating damage indicators are all there and are presumably customizable, at least to some degree.

Afterwards the Terrorcon dropped some all-important Energon, which fans of the series will recognize as the preferred fuel source for Transformers. Energon will act as this game’s currency and main resource for crafting consumables, such as combat health packs, and for repairing Transformers in the Hanger.

At this point it became clear that the free-roaming area and solo-play aspect of the game would serve three primary purposes. Primarily it provides players will a low-pressure environment to test out various Transformers – both in primary and attack modes – and to get a feel for how each Transformer handles. It also serves as an area to “quest” in and gather Energon. Finally, it serves as a method of delivering lore and developing story elements to the game, such as “how the war came to be” and “where we’ll introduce new stuff in future seasons.” 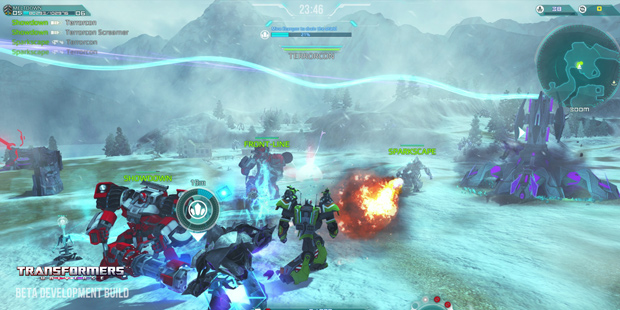 Alex Horton was quick to point out that “seasons” of the game will include new story bits, characters, and maps. There is no set release schedule for “seasons,” and the reasoning behind such is that Jagex would rather release updates when they feel they’re done as opposed to shipping half-baked deliverables.

Players will be glad to know that they can transform their Transformers at will – and it’s highly recommended that they do so to fight, retreat, or get back into the fray quickly. Needless to say, primary mode is a much faster means for covering ground than attack mode, but at the same time it’s very limited in terms of offensive capability.

Players can also switch to another Transformer in their roster at the Hanger. Transformers are collected and selected in a pseudo-CCG style where only one can be active at a time and many sit on the bench in reserve. This is where the Tactics of “MOTA” begin to show; being able to change to a different Transformer at the Hanger will allow players to adapt to the ebb and flow of battle as needed.

Next, we were shown an Autobot entering the Hub – the aforementioned military base. The Hub is where players of the same faction can walk around, party up, access the Hanger, or access the Warp Gate that serves as a map and match selection screen.

Following that we were introduced to the Hanger – the only method of switching Transformers out and customizing them. At this stage there are quite a few Transformers to choose from, at our count at least 12 on the Autobot side, and all of the ones we saw were brand new. Jagex has worked directly with Hasbro in creating many new Transformers such as Front-line, Triage, Sparkscape, Meltdown and Catapult, just to name a few. Most of the Transformers we saw looked like derivations from Generation One. It was hinted that some of the better-known Transformers would appear in the game as playable characters at some point. The pricing and acquisition of consumables, customizables, and Transformers is largely under wraps for the time being.

The Hanger displays all of the characteristics of Transformers in a player’s roster. Different Transformers are specialized at different things – some have different primary mode movement and handling attributes while others are equipped with different attack mode damage types (eg. melee, healing, ranged, fire, electricity, energy, etc). Going on, each Transformer also has different attack penetration and shield attributes. Each Transformer also has several unique abilities ranging from bonus damage buffs to team area-of-effect heals. It was briefly mentioned that deeper weapon and damage mechanics would be present in the game such as on-shot critical-damage chance, damage-over-distance drop off, and arcing shots for longer ranged projectile weapons. 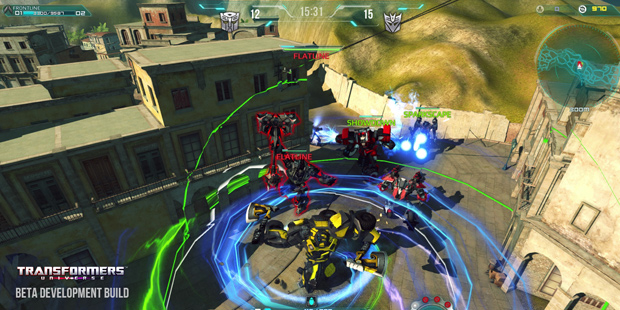 Customization of Transformers is somewhat limited at this stage – there is no create-your-own-Transformer feature, but there are multiple selectable skins and paintjobs.

Right now, additions of Transformers to a player’s roster and skins for the Transformers themselves will likely be the main method of monetizing the title, which is fair as skins themselves have no direct impact on gameplay and it’s clear that no Transformer will be inherently “better” than another – just different. Jagex expressed that they’re very astute regarding Pay-To-Win issues with many of today’s Free-To-Play games. That said, each Transformer would be different enough that Pay-To-Win isn’t really feasible.

After checking out the Hanger we were shown a map selection screen through the Warp Gate. A 4v4 Team Deathmatch (first to 25 kills) was selected. At this point in time it appears as though Team Deathmatch will be the primary mode of play. 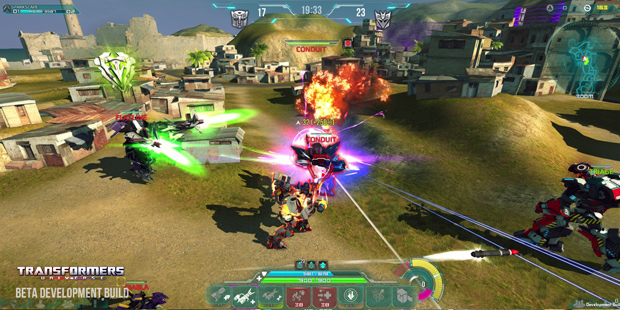 The match we watched was on a somewhat narrow, close-quarters desert town map within some hills. The two opposite edges of the map served as spawnpoints from the Hub/Hanger area. Players raced to the center of the map through alleyways and over buildings in primary mode, and from there they transformed and engaged in what only can be described as utter carnage. Players flanked, retreated, re-flanked, healed, sniped, and swung at each other from all sorts of angles. The way the match played out can be likened to World of Warcraft Arena crossed with some MechWarrior Online; lots of special effects everywhere, and like a top-down MOBA, was a microcosm of ordered chaos.

We observed some very interesting and distinct mechanics that seem to only emerge during combat, which really helps separate Transformers Universe from other online games: The first noticeable one is that players can retreat quickly in primary mode to switch out or repair their Transformer back in the Hanger – note that repairing immediately costs collected Energon. The second is that nothing stops players from stacking the same Transformer, which is a freedom rarely executed in team-based games today. So, if you and your fiends want to field a team of Catapults or two pairs of Meltdown/Front-line then you can. Finally, players can choose to retreat at any point to stall for repair time, set up ambushes, or make flanking plays in three dimensions. As a result of these mechanics, fights can change rapidly and dynamically over time if the players will it to.

In a post-presentation interview it was revealed that game modes other than Team Deathmatch will be available at launch – we asked about the inclusion of an asymmetric mode along the lines of ‘Autobot Search/Rescue vs. Decepticon Search/Destroy’ but for now they’re keeping the other mode types under wraps until a future event. From our interview we gathered that the developers at Jagex have an interest in pursuing some asymmetric gameplay modes, which would honestly be a breath of fresh air in the online multiplayer scene, but there is no confirmation on the inclusion of these modes just yet. We also asked about team sizes not being limited to 4v4, but Jagex was hush-hush about that too – likely good sign.

During the presentation we noted a lack of flying Transformers in the Hanger and during the multiplayer match. When asked about the exclusion of this type of Transformer a developer from Jagex said they’d like to include them, but want to figure out how to balance them and introduce them in a later season.

Given that Transformers Universe is primarily multiplayer focused, there will be an in-game party system as well as a ranked ladder available at launch. We asked about the inclusion of a built-in voice chat option for the game, which would make sense for anything involving tactics, and the developers from Jagex responded positively saying, “We’d like to ship with that if we can, since communication between team members is such a critical element.”

It was recently announced that Transformers Universe would use the Unity Engine, and we’re glad to report that the game will be available both through web browsers that support the Unity Engine plugin as well as a standalone Unity client.

Jagex expressed to us that Transformers Universe is going to be a long-term game with many seasons and iterations and that it’s the biggest game that they’ve worked on since Runescape. We feel, and know, that Jagex is supremely experienced in long-term titles, as exemplified by the still-popular Runescape.

We were overall quite impressed with what we saw; Jagex has taken the Transformers license farther than we expected and it looks leaps and bounds better than many other entertainment franchise licensed games. We were initially skeptical of the whole “MOTA” thing, but it all makes sense now that we’ve seen it in action. We’re looking forward to the next Transformers Universe event and the upcoming release.

Transformers Universe is scheduled to release this summer and is currently in beta. You can sign up to participate in upcoming beta waves on the official website, here.