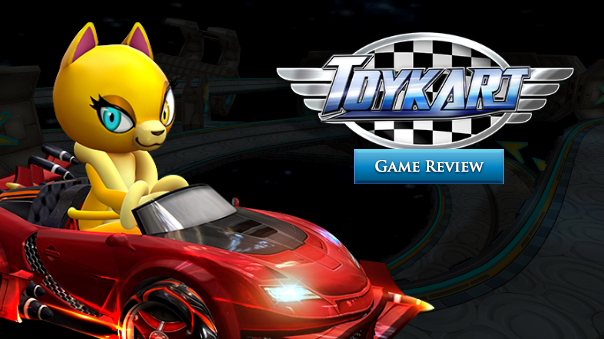 Karting games have always been lite, arcade-y fun titles within the genre of racing games. Normally they provide a ton of excitement and mayhem in short bursts that people can easily enjoy.

We’ve been previously forced to only play these games on consoles, an extra expense for fans of the genre. But with the onset of mobile phones getting better specs that are beginning to rival even consoles these days, it was high time we get a karting game that we can enjoy on the fly.

ToyKart plays just like a vanilla karting game but on the mobile platform. You are able to control the direction of your kart, which runs automatically at the start of the race. Double tapping allows you to drift in the direction you pressed, while pressing on two icons on your interface activates the item you have (on the left) or use the pet ability (on the right). 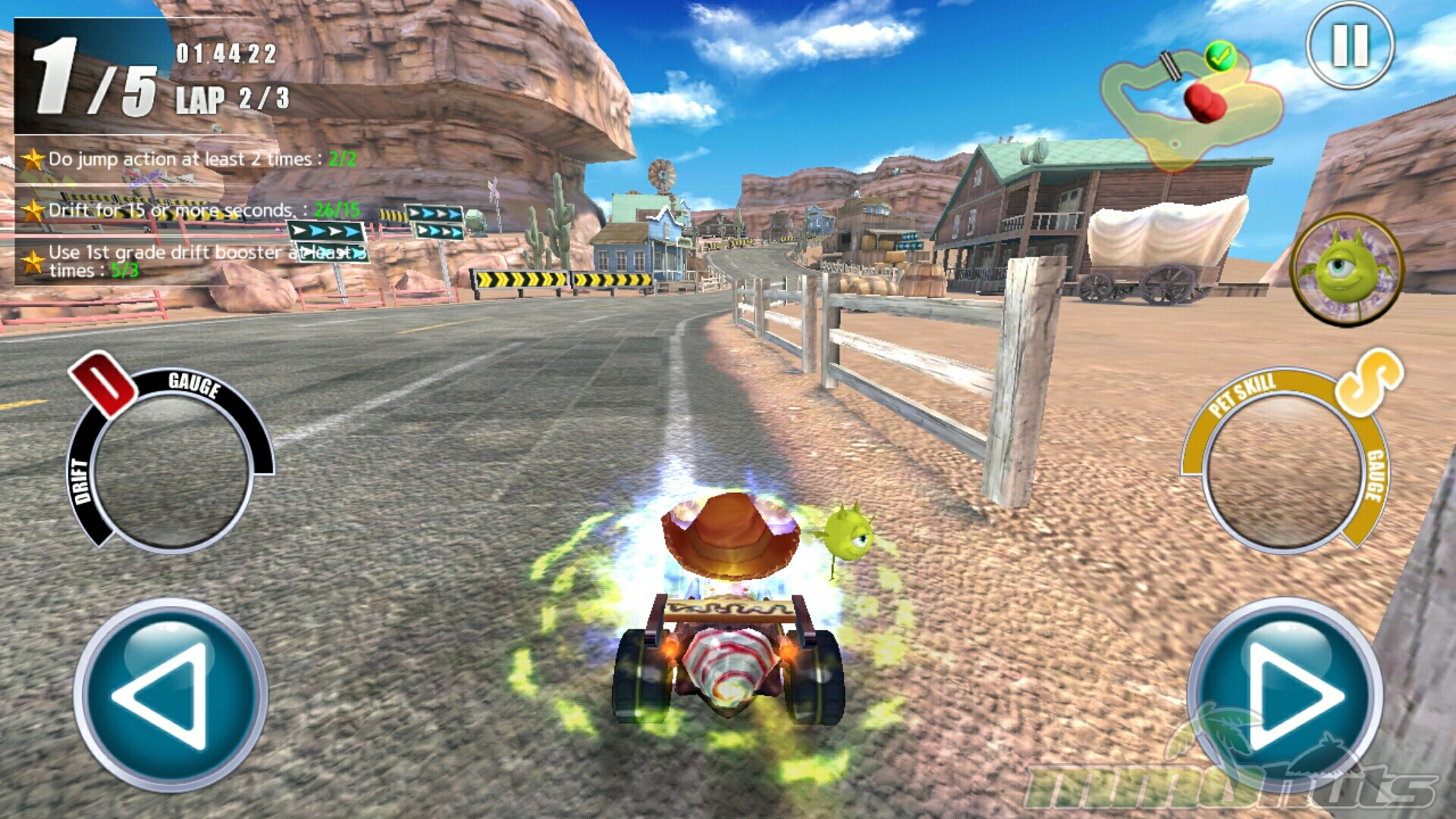 Racing in the Southwest

Races are scattered over a variety of thematically zany locations. You can decide to go through the PvE races in the grand prix, or go toe-to-toe with other players in the battle/arena races, or you can just chill out and enjoy the Infinite mode. All these game modes net you tickets, gold, and parts that you can use to upgrade your kart and other parts in-game.

Activatable items that you can acquire during races are the usual set of items and equipment that you can find in other karting games. Items allow you to attack other players by hitting them directly to slow them down, or even affect the opponent’s kart/player size. You can also add course traps with items – which makes racing harder with the in-place course hazards already out to get you.

One of ToyKart’s main features is the way that you can customize your Kart body, tires, and transmission with parts you unlock in-game. Some of the kart body designs are reminiscent of famous cars in pop culture and actual real cars, but of course tweaked to avoid being sued by owners of those properties. You can also buy separate set of wheels that provides a bit more of stats for your kart,  which you can also use with other kart bodies to make your karts more colorful than the default look. 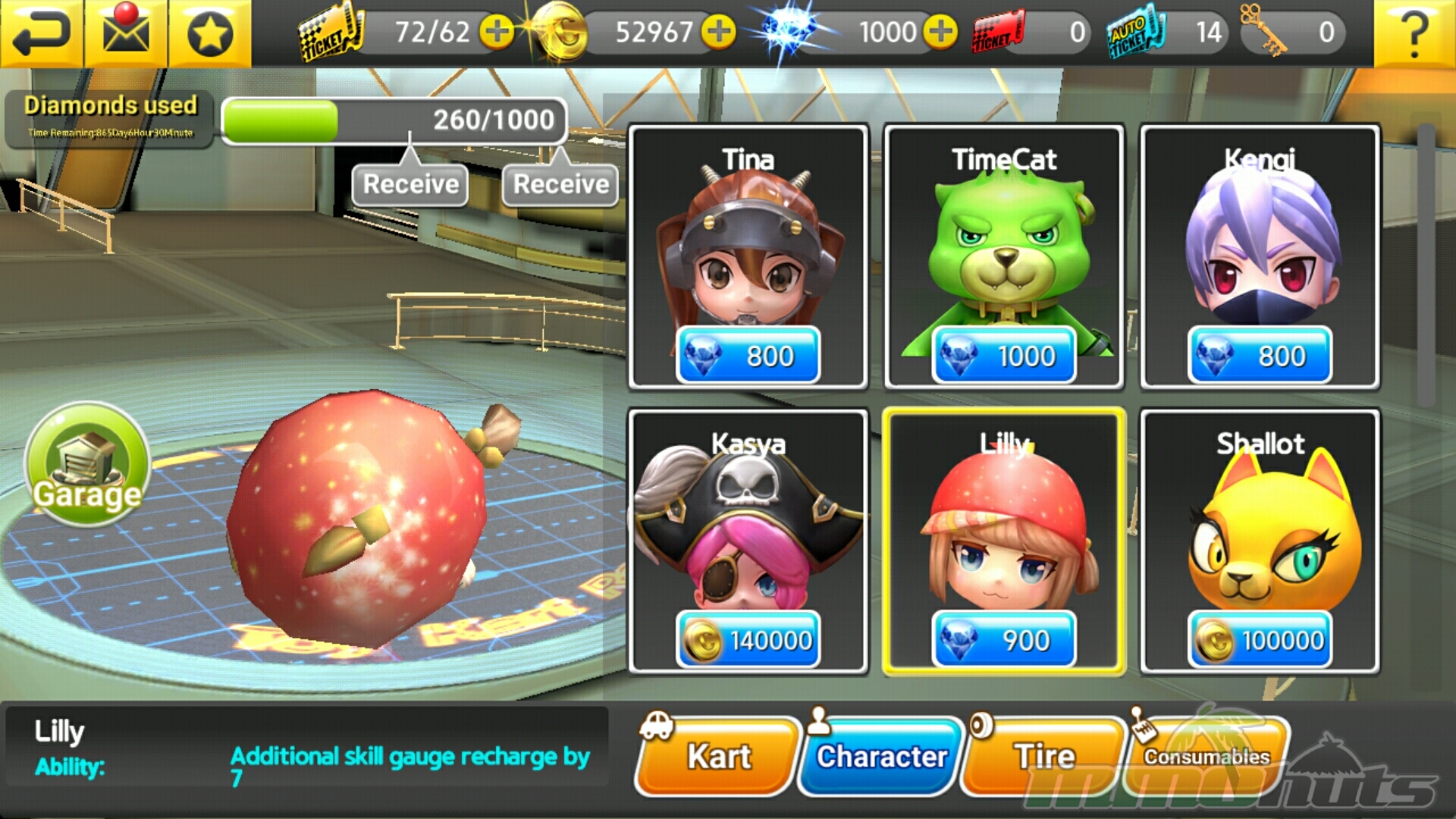 Some of the Driver Options

These kart customizations can’t be outright bought from the store. In fact, you have to play through stages before you can earn the necessary shards to unlock these kart bodies for your garage. Kart bodies can also be leveled up and get their rarity increased when you reach the level cap.

You can also purchase drivers in the shop. The designs of the drivers that you purchase in-game are varied. Some look like cowboys, bears, and characters right out of a Wreck-it-Ralph spin-off game. The drivers provide passive skills on top of the active skills pets already have. While most of the boosts provide passive buffs on the gold and even diamond currencies that you get from races, some also provide boons against attacks or provide boosts for attacks.

The other game feature that you’ll spend time and money on in ToyKart is the pet system. Pets are available for purchase through the game’s gacha store. Pets provide active skills that help you either mess other players up with traps, or directly attack them through skills or status changes.

Pets add a wild card system to the game, because they provide more options to attack or defend against other players in the field. 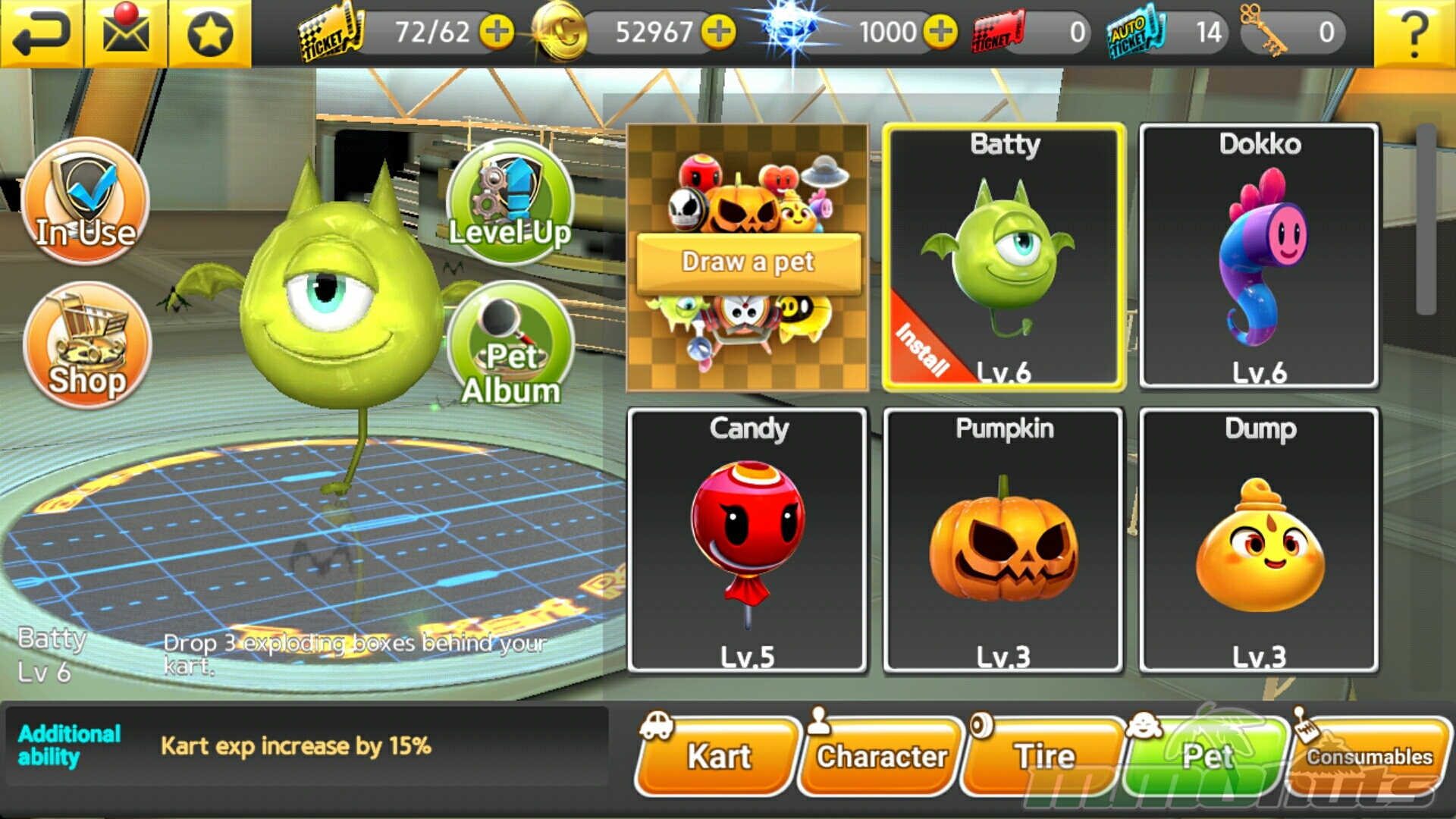 Pets in the shop

Visually, pets stay true to the design and theme ToyKart portrays. Most of the pets look zany and colorful. In fact one pet, the one I’m actually using, looks just like Mike Wazowski from Monsters Inc.

The utility of pets in-game is undoubtedly important, especially when you’re trying to catch up against other players. It’s really important that you have one to be successful in ToyKart.

ToyKart plays just like a typical karting game. However, there are some issues I’ve had when I was playing through the game which are a game breaker for me.

The biggest issue I’ve had is the game’s matchmaking. Looking for battle matches takes forever. In fact I didn’t have a decent PvP match while I was doing the review. This is bad for a game,  since the other half of ToyKart’s replayability relies heavily on PvP. Yes, the game has options on the type of Battles, but the lack of people playing them hurts the game to stay strong for the long term. 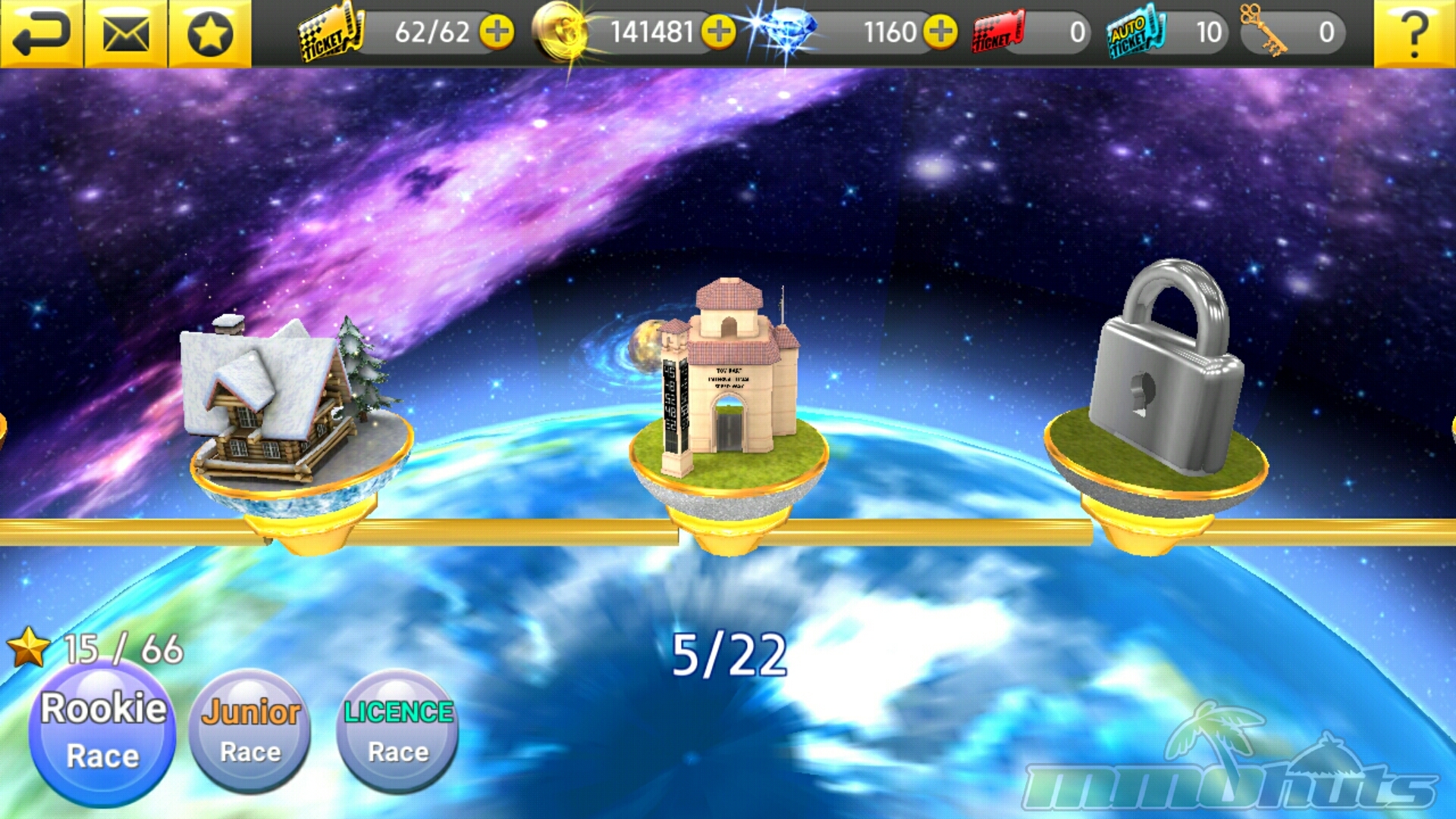 I can say that visually, ToyKart’s overall design isn’t top notch. The UI is pretty clunky and it feels cheap, like your typical free-to-play “just so we can release a game” type of design. Mechanically, ToyKart provides a solid karting experience even with the starting default kart, which is understandably underpowered and clunky. The difficulty progression at least is felt, and upgrading parts make it feel like they’re worth upgrading. However, you need to sink in a lot of hours in-game to be able to reach this point. It’s also got the most tedious starting stages any other game I’ve played so if you’re someone who just wants to pop in and have a good time playing a kart game, you would immediately drop ToyKart in the first hour. They need to make the progression less tedious and more newbie friendly or they’ll lose more players faster.

ToyKart is a game that leaves a lot to be desired. Visually, it’s not appealing, Mechanically it’s above average. But if Playpark’s able to at least tweak the game difficulty to be a bit more newbie friendly, or at least lessen the progression time so that players can customize their karts earlier/faster in the game, ToyKart would be a game worth downloading and recommending. But at it’s current state, I’d suggest you don’t waste your time and move on with ToyKart.