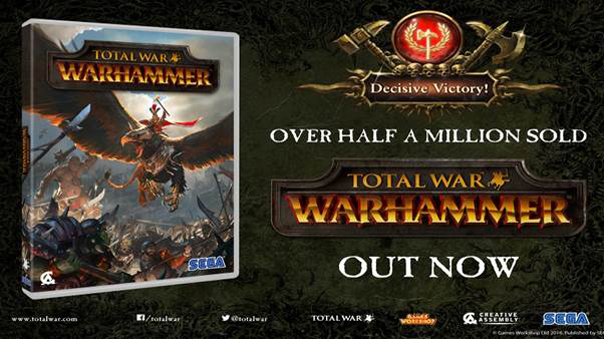 Since the launch of the critically acclaimed Total War: WARHAMMER on May 24th, Creative Assembly’s colossal, fantasy strategy game has gone on to break franchise records during its first week on-sale.

Fans flocked to the battlefields of the Old World when the game launched at 8am BST on Tuesday, and has since racked up more than half a million sales in the first few days, setting a franchise record for the fastest selling Total War title on Steam.

“Total War: WARHAMMER has already proven itself as a runaway commercial success and more importantly we know our players are really enjoying the game.” said Studio Director, Tim Heaton. “We have been regularly topping 100k concurrent players.” He went on to add “The team paid particular attention to stability and performance throughout the game’s development and thoroughly enjoyed creating new ways to play Total War within Games Workshop’s stunning Warhammer Fantasy world. We’re very proud of it, and it’s wonderful to see the game receiving such a great reception from critics, Total War veterans and new players alike.”

As the weekend approaches, those yet to secure their copy of Total War: WARHAMMER  only have until 18.00 BST on Tuesday, 31st May to get the Chaos Warriors Race Pack free with their purchase. The Pack adds three new playable Legendary Lords such as the gigantic Dragon Ogre Kholek Suneater and a full roster of bloodthirsty units, terrifying mounts and monstrous creatures.

Be sure to check out our review and video on the game for further details!