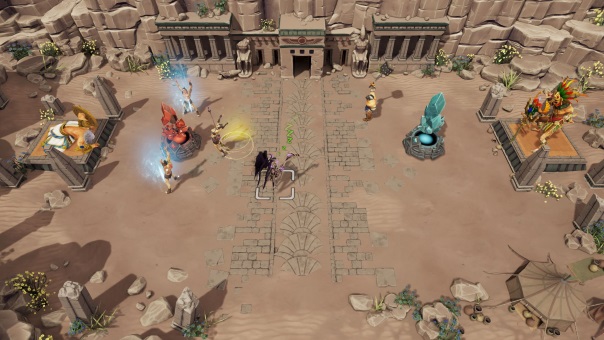 Next time, I’ll cover a different card game! But I found myself playing Hand of the Gods: Smite Tactics, because frankly I think it’s a terrific game and I’m actually not all that bad at it. As another, final note: Really tired of all the Zeus picks. Why does Zeus counter every deck I play?

Last time, I talked about a new faction, the Hindu Pantheon and their very control-heavy playstyle with Ganesha. However, my favorite pantheon is the Mayan deck, and I never thought I’d say that. In SMITE, my favorite is probably Greek or Roman, but the zombie-overrun style gameplay truly appealed to me. You can play the faction a variety of ways, whether you want to run a God-heavy deck, relying on sacrificing your 1/1 zombies for the Kukulkan passive (Spawn a tornado on a random enemy, dealing them 2 damage/displacing them anytime a friendly unit dies) and the neutral Carrier Behemoth (Whenever another friendly dies, deal 1 damage to the enemy Summoner Stone). This is a risky playstyle because this deck has no real reliable way to resurrect units from the grave, which you’d think that it would be something that would suit this game style nicely. 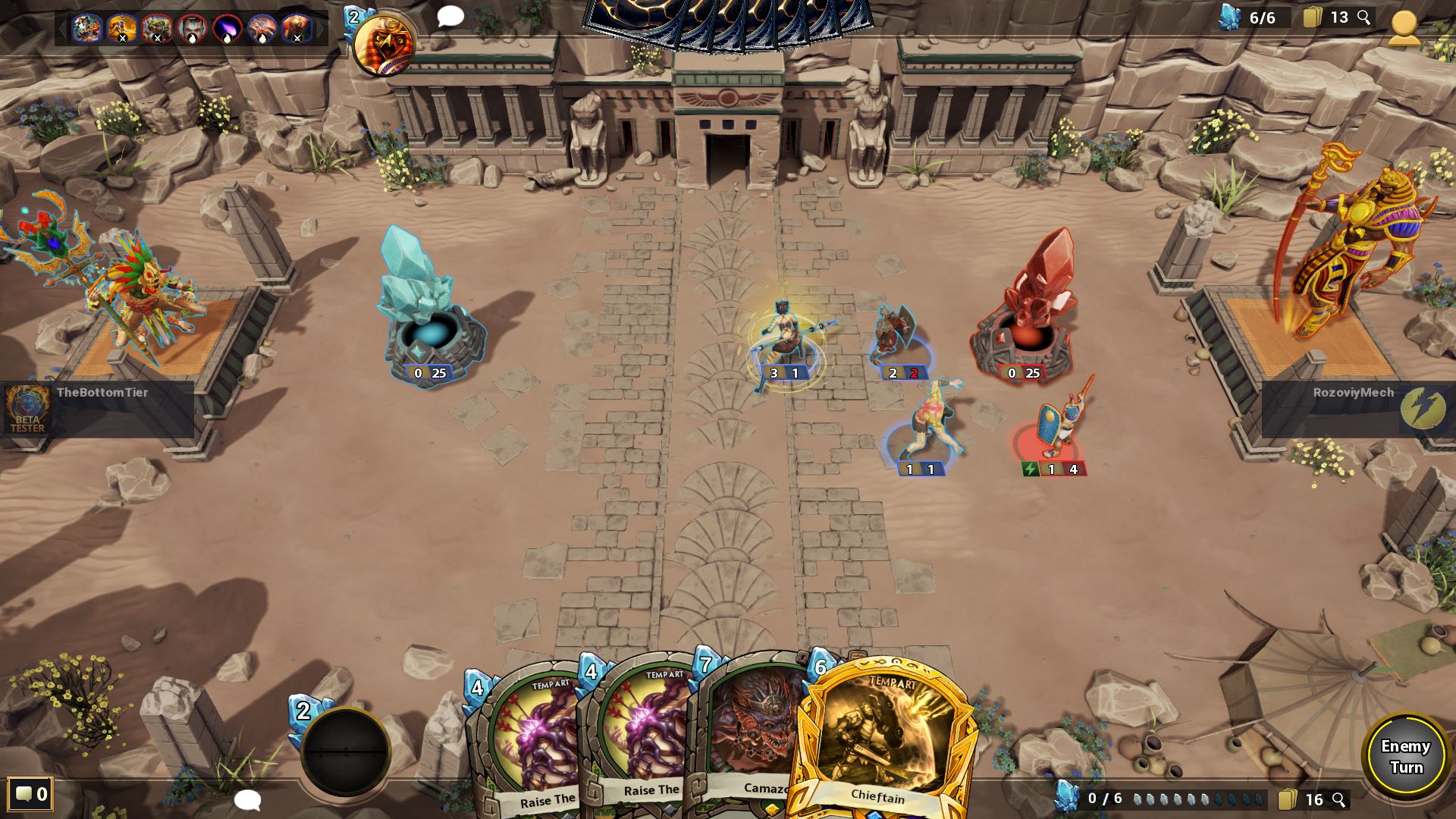 It's the beginning of the end, and he doesn't even know it.

The only real option you have is Barter Soul (Kill a friendly unit and draw two non-zombies from your graveyard) which is admittedly, very good.  (Which I just re-added to my deck. Cabrakan wasn’t working) Using this playstyle, you can run a lot of janky stuff that sacrifices/kills your own zombies to deal damage, if they decide to play passively. If that doesn’t suit your needs, you can go a more melee’ centric route, which also sacrifices units. Then your options become Hun Batz (Gains +1 /+0 and +1 Movement when a friendly dies) and/or Camazotz (Charge, Consume all friendly zombies in play, gain +1/+1 per zombie consumed this way) and use that to secure the win. I do run him in my deck as a last resort/desperate measure. There are a variety of ways to play, but I tend to go with the more control/midrange style of slowing the game down and overrunning/sacrificing as needed. The deck I run is pretty flexible. But before we get into that, what’s so great about Mayans?

Ah Puch (Deck Leader): Mayan Pantheon: 2: Place a 1/1 Zombie on the board on any square. It may only move 1 square a turn.

Characteristics: This is another fairly control-laden deck, from Corpse Explosion (Sacrifice your zombies to deal damage to adjacent enemies), turning powerful enemy units into friendly zombies (Decay)  and overrunning the field with tons of 1/1 zombies for combos, or to buff them for attacks behind the enemy lines. That’s the great thing about having the power to play units behind your enemies Summoning Stone: It becomes a gamble. Do you have Empower Dead (Summon 2/2 Zombies instead of 1/1) or a pair of Lingering Dead (Summon two 1/1 zombies) plus Raise the Grave (Gives all friendly zombies +3/+3)? Are you going to play a 1/1 zombie with no other creatures to guarantee you kill their annoying, buffed Apollo with Blood Bond (Both players randomly sacrifice a creature: both become friendly 1/1 zombies)? It has a few weaknesses, such as once you’ve been board-wiped it’s very hard to come back since those zombies are pretty much gone forever. If you don’t get a good start, God-heavy decks will be your bane, since so few of your creatures are going to be beefy enough to deal with them straight away. Though your Gods do have excellent passives. 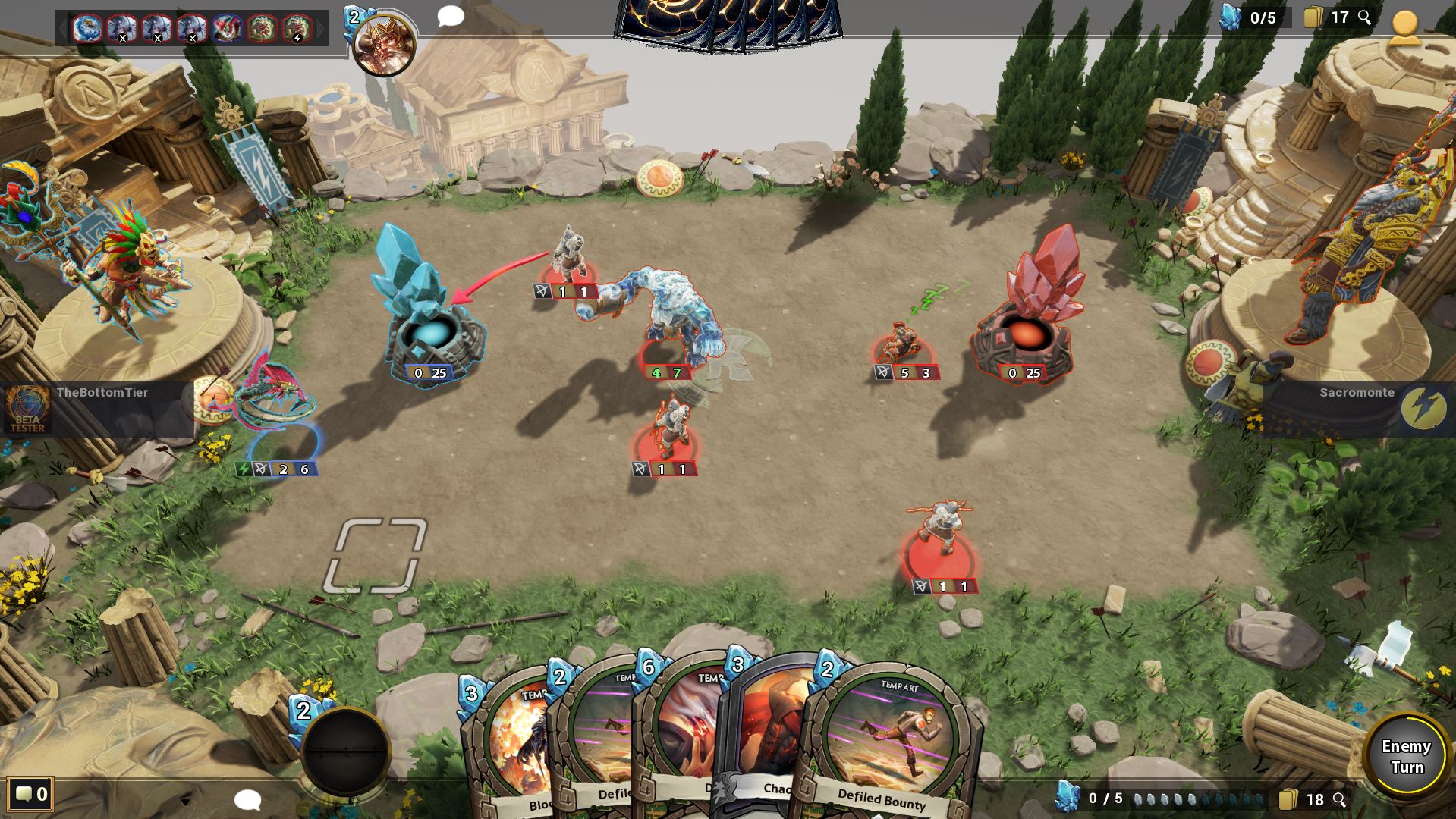 I almost brought this back... then the counter-swarm happened.

Strong/Weak Match-Ups: I’ve had a hard time/easy time with most of the Gods I’ve played against, but you know what beats me the most? Zeus. Zeus has the most answers, and every single one of them runs Divine Intervention (Draw 2 random Gods from your deck) and Divine Vengeance (Deal 4 damage to all non-Gods). However, if Zeus wastes them early, they have fewer answers for a Zombie swarm until they play Poseidon, then you’re basically doomed. Being able to deal 2 damage in a 2×2 is enough to slow your deck to a crawl. At best, your zombies will be 2/2s, without additional buffs, and it’s a really vexing thing to deal with. In general, God-Heavy decks seem to eat zombies up, the biggest offenders being Zeus, Bellona, and then maybe Odin. I had the easiest time beating Ra, forcing them to deck down as early as possible so they hopefully burn their good cards in a panic. I found it was easier to overwhelm Ra, Ganesha, and occasionally Odin. I’ve yet to play against a single Nu Wa with this deck, try as I might. The past two days were almost nothing but Zeus. Can I also say how ridiculously strong I think Arachne is? Being able to play her on turn 1 and just swarm a God-Heavy deck with annoying, far-reaching spiders? Be very aware of board wipe; only wipe the field on your terms if you can possibly help it. You can use Corpse Explosion (Sacrifice all zombies to deal 2 damage to adjacent enemies) in a pinch, but I’m not a fan of it. I prefer to slow it down as much as possible. 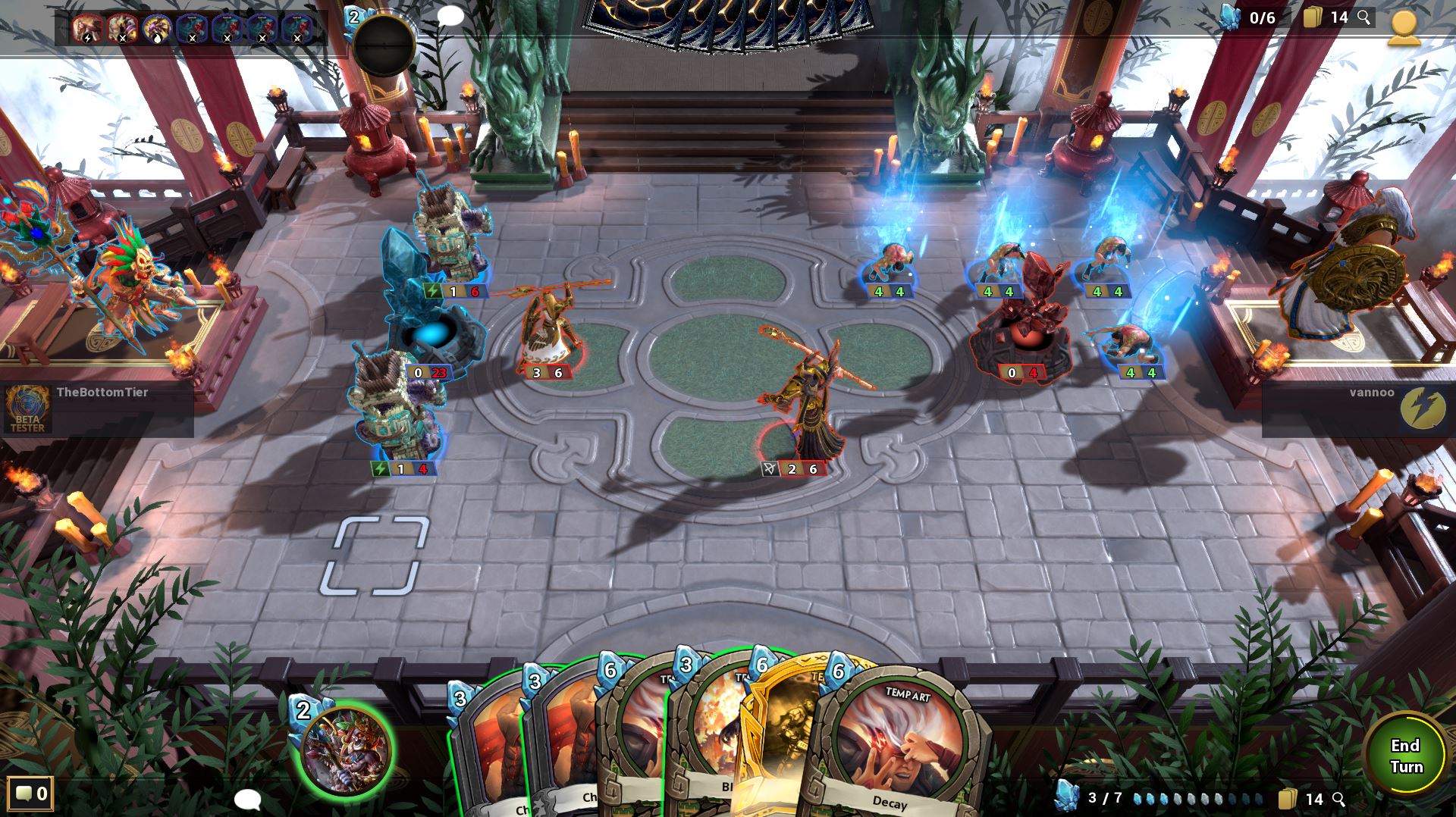 Zeus is hard to deal with ... but let him get cocky and burn spells early. See what happens.

I feel like this deck is way more streamlined than my old one. The Kukulkan/Camazotz are expensive, but being able to play Kukulkan on your backline with lots of zombies in the midfield/around their summoner stone can really make them think twice about killing them. You know, in theory of course. This is also great with Carrier Behemoth if you hold control of the board. I like playing both of them around the same turn if possible, but that’s incredibly risky. If they still have direct damage, this can really turn out to be an incredibly arrogant play. In my estimation though, the stars of the deck are Carrier Behemoth, Empower Dead (though I’m thinking of turning this down to 1 in the deck), Raise the Grave, and Gladiator. Being able to play zombies for 0 is an absolute godsend until they handle him. Another option if you can hold them back in relative safety is Chieftain (gain +2/+2 whenever a friendly dies) and they start as a 6/5 as is. Sure, your deck has virtually no healing in it, but if you can keep him alive, then pop Camazotz? You can theoretically take down their Summoning Stone in one turn if you can manage enough control of the board. Feel free to play Zombies behind their summoning stone where their Aphrodite/whatever is hiding and force them to deal with it. That, in my estimation, is the secret of skillful Ah Puch play. You must force them to play at your pace. Make them deal with the threats you want them to deal with. But be aware of what range/radius their direct damage has. Spread out the zombies, keep them behind close to midfield until its time to play both Empower Dead at once to suddenly hammer them with piles of beefy zombies. It’s sort of like a control deck, in that you can hang back and play powerful creatures with disgusting triggers to deal direct damage to their creatures/summoning stone without any real consequences. Play Cabrakan and make him be dealt with while you double-drop Lingering Dead for a nice beefy swarm to go with Raise the Grave, even better if you’ve already played Empower Dead. My problem with the last card (Empower) though, is if you get it in play, it’s permanent. So having one in play and one in your hand makes it a useless card unless your opponent doesn’t realize what it is. Then it can be sort of like a trap card (only it does nothing but psyche someone out)! I feel like I really have to work hard for my wins in the Mayan deck but they’re always worthwhile. If you can totally lock them down early game, it’s a lot easier, but I’ve found that the longer the game goes on, the bigger of a crap-shoot it is. If you can manage to deck them out/whittle down their hand without losing too much on the field, you can win with ease. Otherwise? You’re in for the long-haul.