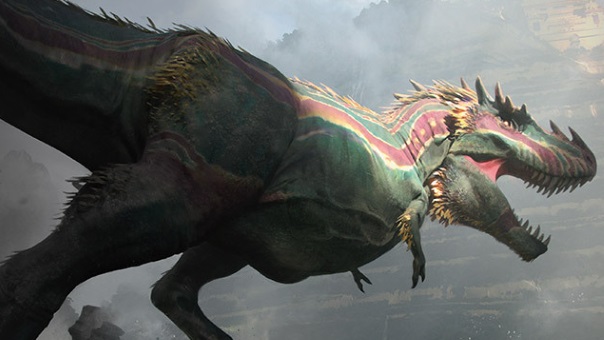 “Soon, stones of fire will rain down. Flames shall scorch the land. The burned out plains will slowly freeze, ushering in a long, cruel ice age.” – Azala

Welcome back to Topdeck Tutor, friends! Now that MTG Arena’s Closed Beta is in full swing, I and Colton are sharing an account for work/streaming purposes, so we can produce content like this, just for you. Today, we’re featuring a R/G Dino deck, that I have named “Dino Pancakes”. It’s not perfect, but it is reasonably easy to build, taken off the back of the stock R/G deck, but modified in a few important ways for efficiency/dino stomping. This deck even has theme music. So enjoy this delightful music while you read:

In card games, there are two routes to take when building a deck. You either build for fun, or you build what wins matches. Sometimes, there’s some overlap. Not often enough, but that’s the way MTG works. However, as I began my adventure in MTG Arena, I was losing a bunch, trying to play decks I thought were interesting, and winding up disappointed in my/the decks’ performance. So I examined my losses and found the deck I was losing the most to: The stock R/G tempo deck, built around Dinosaurs. So I tried it for myself, and it worked okay. But I asked myself, and Colton, “How can we make this better?” I made a few changes, and the wins continued to stack up. So Colton had some questions, a couple of suggestions, on how to win instead of fleeing West. Other special thanks go to Meganissaying, who pointed out a few creatures I had neglected. 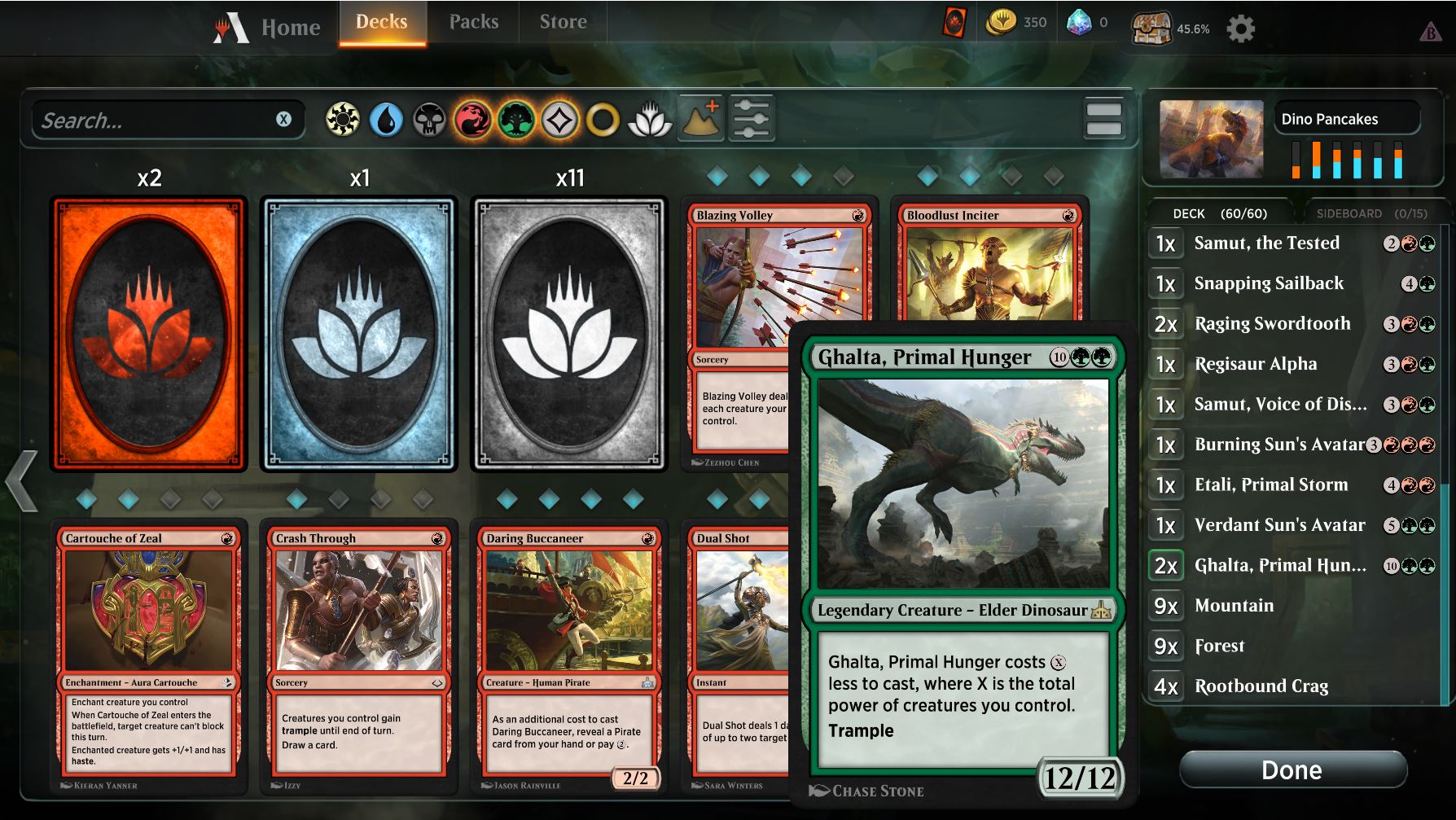 Ghalta is the arm of the mighty dinosaur empire.

This deck is still being changed, and we’re talking about making an R/G/W version because that’s the deck I lose to the most (that and heavy counters). This is a deck that’s all about tempo. You can work with a slow start, but the ideal hand means you ramp out of control, and cast creatures that are way out of your price range, in a very steady fashion. With Otepec Huntmaster, you can really get the game moving in your favor. The downside is they have 3 health and are very easy to kill with direct damage, stop with counterspells, and force them off the board with a variety of spells that are in the current standard meta. The idea behind is that you ramp, apply a little damage to your “Enrage” creatures (Whenever that creature takes damage from a source, they apply an effect to the game) and in some situations, force your opponent to let them through and deal damage, to prevent those effects from coming online. You want to get those giant creatures on the board and do it fast. The fastest win I think I ever received was around turn 5 when I played Ghalta, Primal Hunger, which conveniently had Haste, after applying Insult (Damage can’t be countered, the damage is doubled from my sources).

Characteristics: The notion behind “Dino Pancakes” is you want to play your cheap ramp abilities on turn one/two if possible, get a Huntmaster on the board, and start spamming Dinosaurs. Most of the deck is pretty high-cost, but with the “Enrage” mechanic, you can bring a lot of free mana onto the board with Ranging Raptors. Whenever they take damage from a source, you can play a land from your deck, in play and tapped. So if you can get multiple sources a turn (from your abilities, blockers, creature abilities), you can thin your deck out and make it that much easier to pull creatures off the top of your deck. “Dino Pancakes” is all about options. You have cards to reveal lands/creatures and put them into your hand, or simply put them into play directly (Samut). You have lots of options, and not one creature fits every situation, except maybe Regisaur Alpha (All of your dinos have haste) or Ghalta, Primal Hunger (12/12, comes into play cheaper, depending on total power of your creatures). There’s also the spicy picks like Etali, Primal Storm (Cast cards from your opponent’s deck for free when an attack is declared). But the Enrage mechanic is what makes it shine.

That means you have to take bold action, and deal damage to your own creatures, and that’s where cards like Shake the Foundations (1 damage to all creatures without flying), Savage Stomp (Fight a creature, gain +1/+1 token first), or Raging Regisaur (deal 1 damage to target creature when attacking). This decklist is not final, and we’re still looking at ways to make it more efficient. Forerunner of the Empire is expensive at 4 mana, but in a pinch, when you have no creatures, he can go digging for one when he’s played, plus every time you play a Dino, you can deal 1 damage to all creatures. That’s just one more fun way to get this deck’s combo up and going. 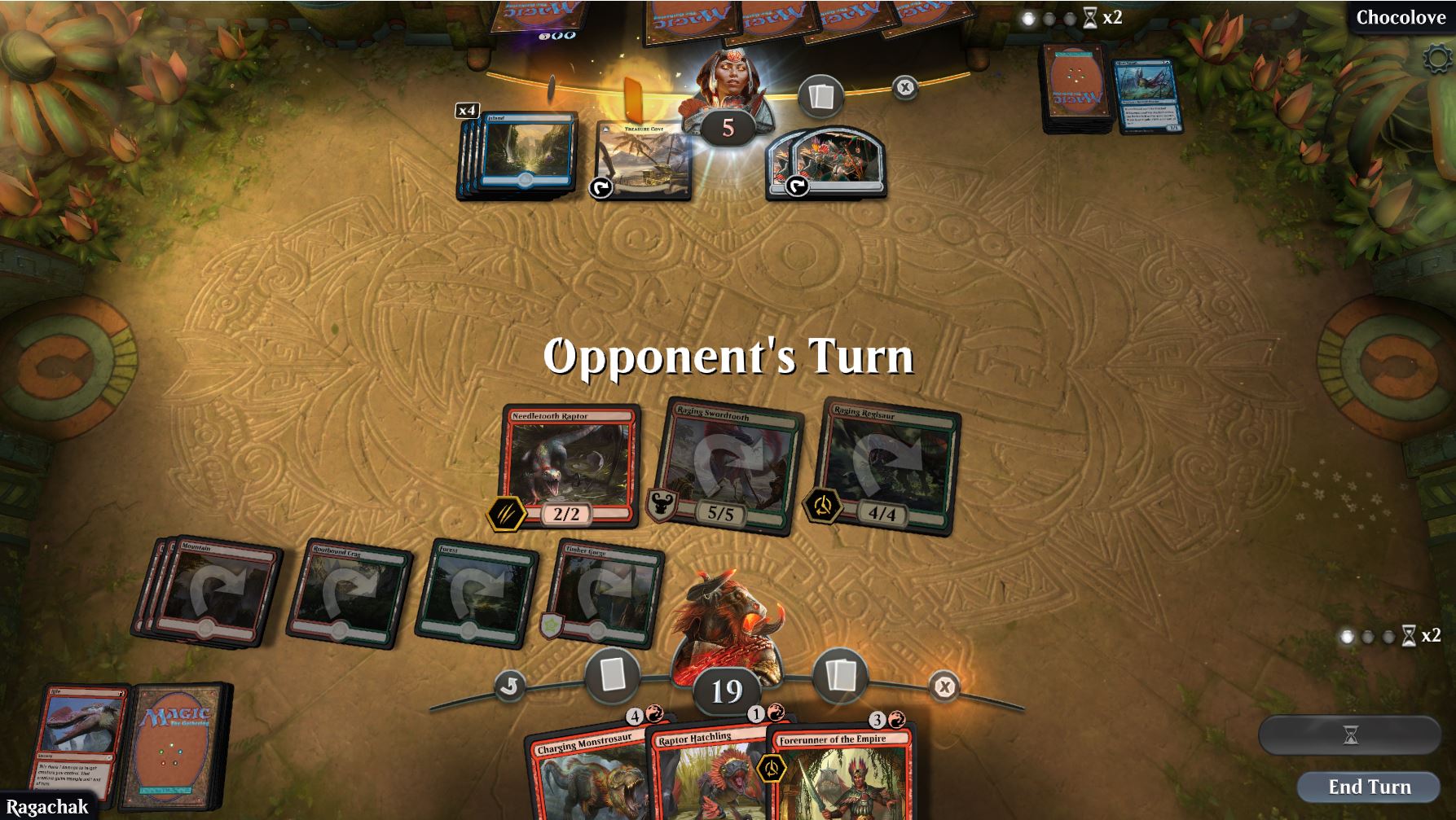 Even in situations when you only have one color, you can win.

Strong/Weak Matchups: The only dinos better are W/G/R dinos, but that’s only if it can get moving before R/G. R/G dinos works fantastic, but if they can get some of those more defensive, indestructible white dinos on the board, it will spell disaster. Life gain/lifelink decks are not a serious threat, provided they don’t have heavy doses of control in them. Your dinos will hit so hard and so often, that it doesn’t matter what life they gain a turn. But I will tell you what bodes the worst for this deck, and that’s blue-heavy control. U/B and U/G control make my heart ache. I played against a blue control deck that countered my first 21 spells. Every single one of them. That actually happened twice that day, but the second time, they had no creatures, so I eventually got online and pummeled them, and the first time it happened, I had to wait until they drew out. Those decks are fun and hard to deal with, but if you bait out counters, and have solutions for their piddly creatures, the game is yours. You can’t get in your own head and get frustrated because your spells keep getting countered. Control is a big weakness for this deck, and so are aggro decks that are faster. If you get a good start, aggro’s no threat, but if not. . .

Green Cards:
-Commune with Dinosaurs (x3)(1G, Sorcery): Look at top 5 cards: Reveal a dinosaur or land, put in your hand. Put the rest on the bottom of the deck.
-Thunderherd Migration (x2)(1C1G, Sorcery): Additional Cost: Reveal dino from hand or pay 1C. Search for a basic land, put it into play tapped.
-Ranging Raptors (x2)(2C1G, Creature): Enrage: When it’s dealt damage, search library for a basic land, put it into play tapped. 2/3
-Savage Stomp (x1)(2C1G, Sorcery): Costs 2 less if you target a dino you control. Put a +1/+1 counter on your creature, then it fights a creature you don’t control.
-Forerunner of the Empire (x2)(3C1R, Creature): Search for a Dino, reveal it, put it on top of your library. When a Dino enters play on your side, you can deal 1 damage to each creature. 1/3
-Needletooth Raptor (x1)(3C1R, Creature): Enrage: When dealt damage, deal 5 damage to target opponent’s creature. 2/2
-Puncturing Blow (x1)(2C2R, Sorcery): Deal 5 damage to target creature. If it dies this turn, exile it.
-Snapping Sailback (x1)(4C1G, Creature): Flash. Enrage: When dealt damage, put a +1/+1 counter on it. 4/4
-Verdant Sun’s Avatar (x1)(5C2G, Creature): When it or another creature enters the battlefield on your side, gain life equal to its toughness. 5/5
-Ghalta, Primal Hunger (x2)(10C2G, Legend): Costs X less where X is total power of your creatures. Trample. 12/12

Multi-Colored Cards:
-Raging Regisaur (x2)(2C1R1G, Creature): Whenever it attacks, deal 1 damage to any target. 4/4
-Samut, the Tested (x1)(2C1R1G, Planeswalker) +1: One creature gets double strike until end of turn. -2 Deals 2 damage to up to 2 targets. -7 Search your library for up to two creatures/planeswalkers and put them into play. 4 Loyalty.
-Raging Swordtooth (x2)(3C1R1G, Creature): Trample. When it enters the battlefield, deal 1 damage to each other creature. 5/5
-Regisaur Alpha (x1)(3C1R1G, Creature): Other Dinos you control have haste. Put a 3/3 Dino with Trample in play when he enters the battlefield. 4/4
-Samut, Voice of Dissent (x1)(3C1R1G, Legend): Flash, Double Strike, Vigilance, Haste. Other creatures you control have Haste. 1W: Untap target creature. 3/4

Lands:
-Mountain (x9)
-Forest (x9)
-Rootbound Crag (x4): Comes into play tapped unless you control a Mountain/Forest. Taps for either. 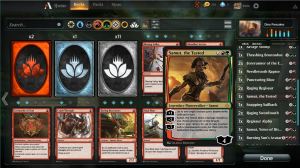 If Samut survives, play both Ghalta and Regisaur Alpha. Then you cackle. It's required.

Thoughts on Cards: There are a lot of “vanity” cards in this deck. Creatures that, while fun, and are game changers, could definitely leave, if we expanded into three-color territory, or simply had better options/more spells. Because it doesn’t have a lot of “answers” to problems, like early creatures unless I use Abrade/Lightning. But there are in fact, lots of creatures that “could” leave, but I simply like them too much. Burning Sun’s Avatar and Etali, Primal Storm are on that list. I love them, and if I can get them on the field, they do mean and nasty things. However, I could replace them for cheaper options, or more Enrage creatures. It would be very easy to turn this into a three-color dino deck, but we’re still short a few creatures for that. The “Wild Card” system definitely makes it easier to get whatever card you’re after. This deck goes on crazy winning/losing streaks. Either I win 20 in a row, or I lose 15 in a row, there seems to be no in-between. I originally started playing R/G dinos because I kept losing to it, but I genuinely started to enjoy it. One of my favorite ways to play MTG is to win out of nowhere or to come back at the end, with a surprising turn, and this deck can do just that. It’s easy to build in MTG Arena, because it has a solid foundation to build off of, and it’s incredibly easy to adjust it to your liking. Not to mention, it’s incredibly satisfying to have a combat turn where you hit for 50-70 damage. It’s hilarious, awful, but oh so satisfying. There is no “right” way to win because every creature has a use in the right situation. Keep your eye on what’s going down, adjust where you need, and show them that the Reptites will one day rule the land. If you want, you can take some of those vanity giants out, and put more control in as needed. I’m torn on Samut the Legend though. I like it, it’s useful, and it’s fun. But I’m just… not sure it belongs. There are so many other cards I can use with better synergy, like extra Regisaur Alphas.