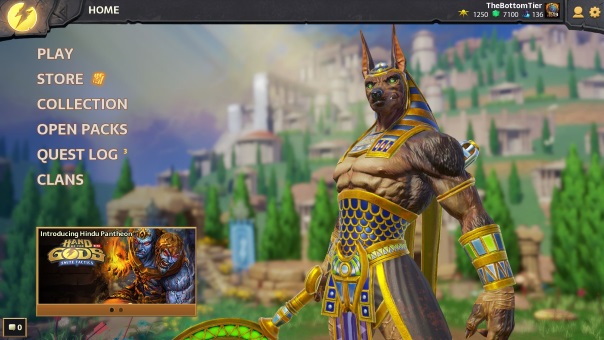 So, I’m going to start this series and see where it goes! I call it “Topdeck Tutor” or “Topdeck Trainwreck” when Colton posts, where I focus on various card/strategy games, primarily stuff like Hand of the Gods, Magic: the Gathering. I’m going to start this off with something near and dear to my heart. “Control”.  Control decks are when you counter, silence, stall and stop your opponent so they have as little fun as possible. You want to drag the game out until their teeth itch and they’re tearing their hair out, desperate to even play one card. That’s where mistakes are made, and victory is had. But in Hand of the Gods: SMITE Tactics, there are no counterspells (yet, anyway). There was no dedicated way to lock people down, other than Au Puch and his obnoxious zombies/overrun style. Maybe Nu Wa’s deck. But all told, there was no dedicated control style, until the Hindu pantheon came, led by Ganesha. A support God has their own pantheon? As it should be. All Guardians should run pantheons but that’s neither here nor there. So I built a few decks and decided to figure out some pros, cons and general playstyle impressions. However, this won’t be the same for everyone, because everyone treats card games different.

Ganesha (Deck Leader): Hindu Pantheon: 2 Mana: Deploy a Pillar of Life (anywhere on the board). It will heal a random friendly for 1 every turn. You can play as many as you like. They can be destroyed. 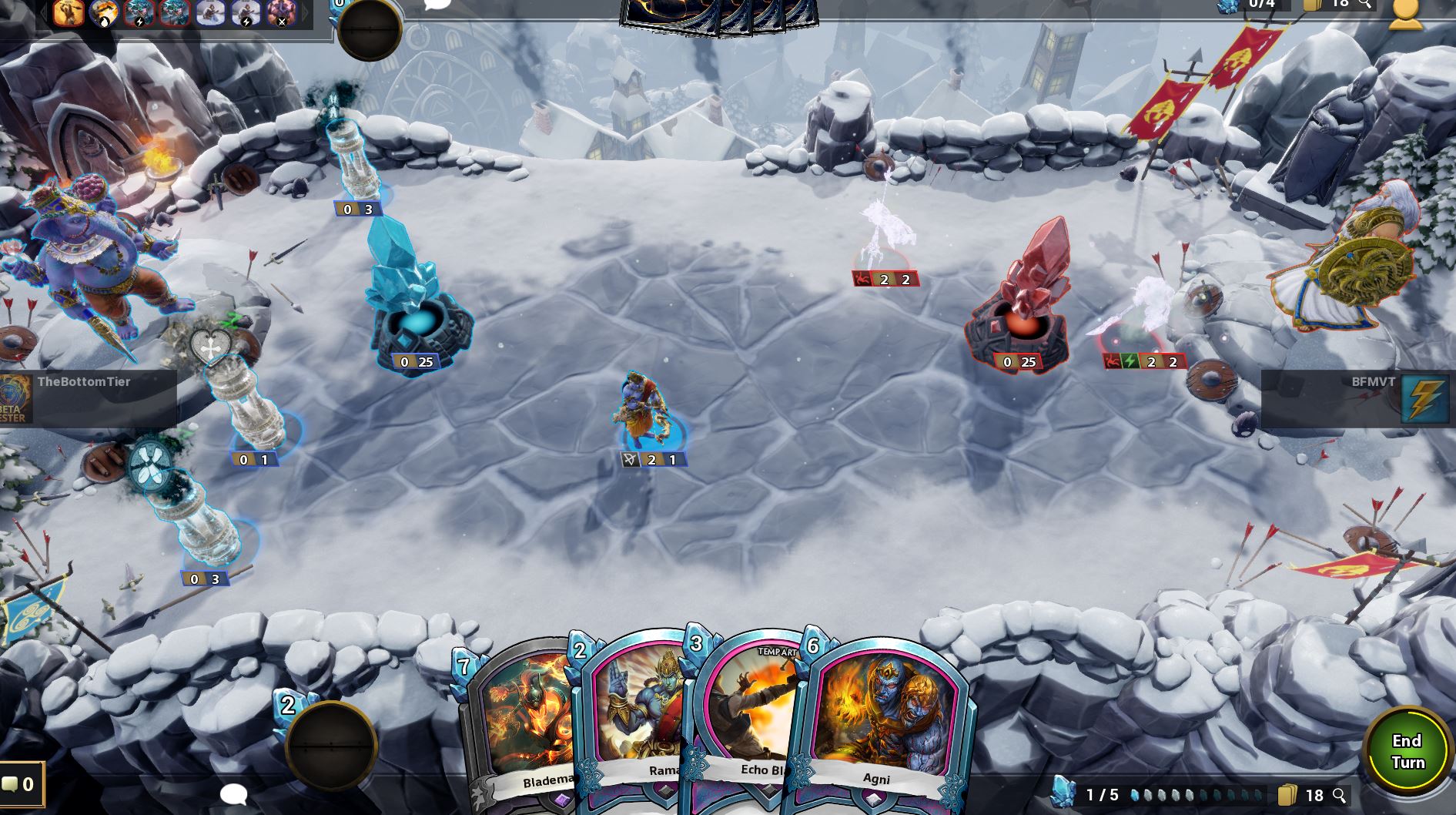 Rama's clearly the star here and in SMITE.

Characteristics: Control-style deck. Mid-High Range costs. Not terribly aggressive, but excellent as far as restoration/control. New game mechanic: Reincarnate (When the God would go to the graveyard, bring it back to your hand instead. It loses Reincarnate. It tends to change its abilities/increase them slightly). Reliance on Structures (Pillars) is a blessing/curse. Place them in defensive locations, or simply behind the enemy line to distract them and prevent from focusing on what they need to instead. The ability to clone friendly or enemy Gods is definitely a boon, and Call of Avatar creating temporary clones of all friendly Gods (with charge) is potentially the most interesting. There are no “Creatures” in the Hindu deck, except for Gods. Their costs are a little on the high-side, except Rama, but Reincarnate makes them worthwhile in the mid-late game.  Experimenting for Later: Does Call of Avatar allow for Warcry procs? If so, combo Agni, Agni with Illusion and Call of Avatar to board wipe. 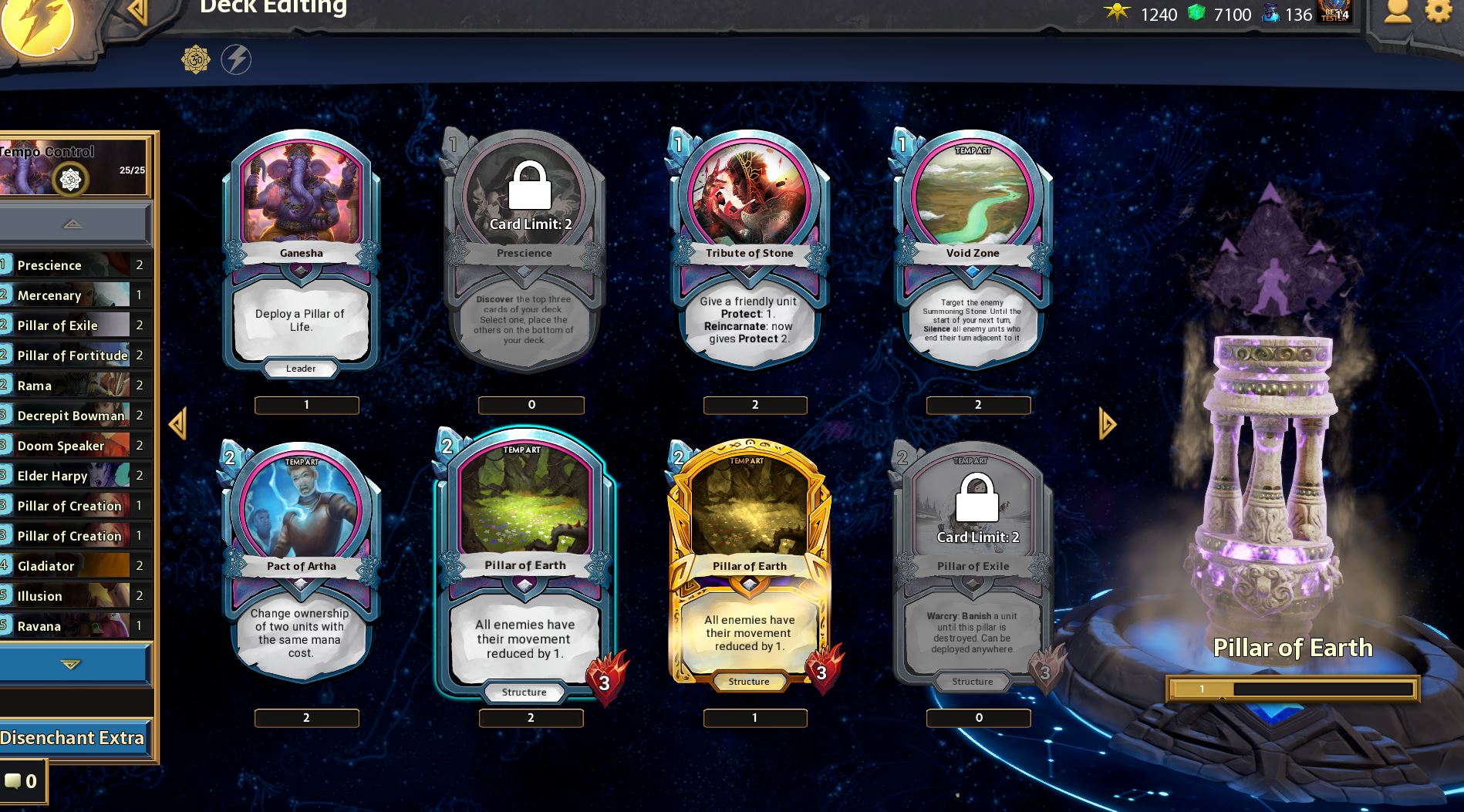 Strong/Weak Match-Ups: Being rushed down is probably the hardest thing to deal with because some Ganesha decks are pretty damn slow. Ra and Zeus were my hardest matchups, followed by Odin. Slow decks can’t keep up with Ganesha. But Ra and his ability to heal globally, if not put in its place with Silence/Rama, can combo with Thoth to absolutely obliterate all of your Pillars. But slower decks, or decks that rely heavily on Gods can be the easiest matchups also. Early in the game, lock down their powers with Pillar of Exile and Rama, if they have no answers for that, you’ll be able to just slow them to a crawl. Wait for them to run out of cards, or hold out for the late game and overrun them with Neutral creatures. 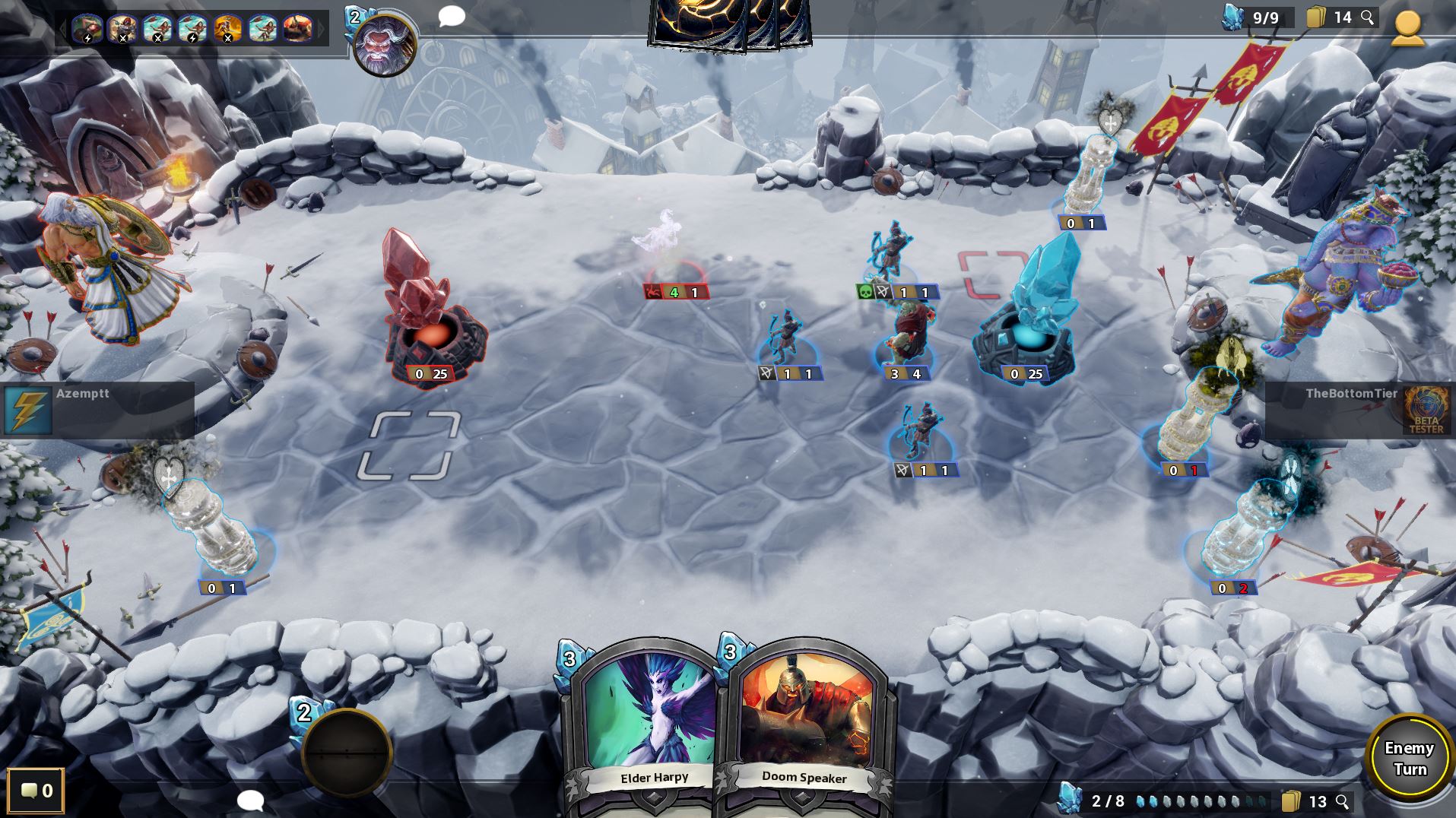 Ideally, this is what you want the map to look like. But more Pillars. Lots more.

Thoughts on Cards: Personally, I’m not sold on Elder Harpy and Prescience. I only am worried about these, because one of my big ways to win is to stall the game until they run out of cards. And any card that will put me ahead of them in that way can cause me to lose instead. If I remove those, Flourish and/or Echo Blast are notable cards to add to the deck instead.  My favorite start to the game is Pillar of Banishment + Rama. It slows down the game for both sides, but can completely cripple the other side. If you have some kind of damage to play next, do so. Personally, I don’t send Rama into attack unless there is absolutely no other enemies on the field. His ability to lock down an enemy Gods powers can really put the game in your favor for a long while. Sure, they can just single-target him, but hopefully, he can have Pillar of Fortitude/Pillar of Life to keep him in the game as long as possible. Flourish helps him stay alive too. Call of Avatar can also be a great game-ending card. With a pair of Agni on the field, tack on Kali or someone else on board, you can run down their Summoner Stone easy. However, this deck can be pushed down early, with its lack of strong, useful creatures or aggressive monster picks. If you get held down early, try to use Pillars of Life aggressively, somewhere behind their lines to slow down their push. There are pretty incredible potential combos in the deck. You can also use Illusion to use whatever handy power your opponent is using as far as units go, and use it against them! It can be used to be aggressive, or simply to force that to be the new presence on the board while you get your Pillars back up. The first deck I tried wound up a bit heavier on the cost and couldn’t beat anything. The only hope was to pray for a misplay. This one is a lot more active/proactive.

Overall, it’s a fun, different way to play with the other more aggressive decks. It’s a bit slower to play, and you won’t always defeat their Summoning Stone, but with careful planning and active awareness of what your opponent can do, you will make them regret tangling with peaceful Ganesha. If you have other card games/deck ideas you’d like me to discuss, please leave a comment!