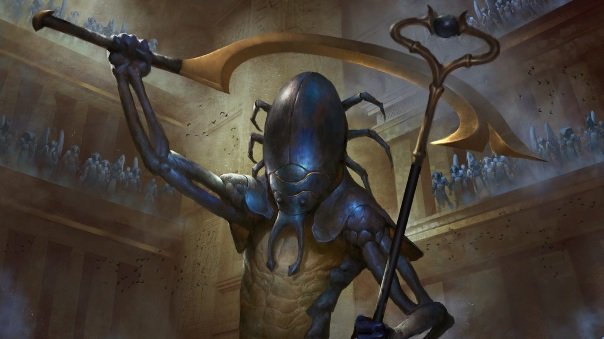 We’ve been playing an awful lot of Magic: the Gathering Arena here at MMOHuts (at least between myself and Colton) and few decks cause me more distress, more frustration than “U/B Control (Scarab God)”. The Scarab God is one of the most frustrating creatures in the game, and with good reason. It’s a 5/5 legendary god that comes back to your hand when it dies (unless you exile it), and at the beginning of your upkeep, opponents lose X life and you scry X, where that is equal to the number of zombies you control. While that doesn’t sound so bad, he can exile creatures from any graveyard and make 4/4 Zombie Tokens of those creatures. He’s very hard to deal with, and with ways to counter kill spells/bring him back (Hello, Liliana), there’s a lot to be said about this deck. Over about two weeks, I climbed from Unranked to Gold in MTG Arena and I felt incredibly good – until I started fighting Scarab God. It’s a deck that has so much draw power and capacity to come back.

This is not a deck that you’re going to win within four or five turns unless they realize what you’re running and simply give up (that has happened). The idea is to figure out exactly what they’re running, and in MTG Arena, that’s obvious within two to three turns on average. Learn what cards they need to win, and stop those cards. You have a host of counters, creature destruction skills, and a few solid flying creatures to deal damage with. This is a deck you can stall out and win, or just swing with your beefy Sphinxes, and Scarab God (when they can’t block. Don’t leave that to chance). You have card draw with the Champion of Wits, but there are moments when you don’t want to use its draw power (say, if you have no cards in your hand unless you really want cards in the graveyard). This is a deck I’d like to try with artifacts + Karn, but I think that’d be stretching it far too thin. But . . . that is going to be my next experiment I think, Karn/Control decks. But that’s not what you’re here for! This is my take on Scarab God.

Characteristics: Scarab God is all about making your opponent frustrated. It’s a mid-range control deck with just enough damage to win the game, if that’s the route you want to go. If your opponent has no creatures and counters, you have the option to swing for big numbers, if you have Glyph Keeper, Champion of Wits and The Scarab God on the field. You don’t have a lot of creatures. In fact, I just listed the entire cast of characters. Liliana, Death’s Majesty is also run, but she’s not the win-con. I typically use her to bring Scarab God or Glyph Keeper back onto the field, unless they simply don’t swing at Liliana. Then I build a zombie army and make the win happen much faster. The more zombies you have on the field, the better. So, you counterspell their big, beefy creatures, and make copies with The Scarab God. Then you cackle and let them die to life-loss every turn. While yes, you have plenty of counters and creature destruction, you must use them wisely.

Strong/Weak Matchups: Can The Scarab God be bested? Of course it can, don’t be silly! It’s incredibly strong, and I’m in the camp that maybe he should be banned, but if he’s gonna be in, may as well use him. But what’s he weak to? One of the best decks against it that I’ve seen is either 1. A stronger control deck or 2. A much faster aggro deck. R/W Exhaust/Aggro is one of the fastest, most annoying decks for Scarab God, as well as RDW (Red Deck Wins), as long as it gets off the ground fast enough. It’s incredibly important to swing fast, swing hard, and swing often against Scarab God. It doesn’t run a lot of creatures, but it does have a lot of Scry and deck draw, so you have to blow them up before they have that all-important god in hand. If you can’t out-swing them, you must control the board so Scarab God doesn’t get moving. Exile it, destroy it and then exile their graveyard, do something. But do it fast.

Moment of Craving (x4)(1B1C)(Instant): Target creature gets -2/-2 until end of turn. You gain 2 life.
Golden Demise (x3)(2B1C)(Instant): Ascend. All creatures get -2/-2 until end of turn. If you have city’s blessing, instead only creatures your opponent controls gain -2/-2.
Vraska’s Contempt (x4)(2B2C)(Instant): Exile target creature or planeswalker. You gain 2 life.
Liliana, Death’s Majesty (x1)(Planeswalker – Liliana 5 Loyalty): +1 Create a 2/2 black Zombie token. Put top two cards of your library into your graveyard. -3 Return target creature card from your graveyard to the battlfield. It’s also a black zombie. -7 destroy all non-zombie creatures.

The Scarab God (x3)(1U1B3C)(Legendary Creature – God 5/5): At the beginning of your upkeep, each opponent loses x life and you scry x, where x is the number of zombies you control. 1U1B2C: Exile target creature from a graveyard. Create a token that’s a copy, that’s also a 4/4 zombie. When The Scarab God dies, return it to its owner’s hand at the beginning of the next end step.

This deck kind of speaks for itself. I do want to add more special lands to it, but it’s not really necessary I think. If I can find room, I’d add another The Scarab God and another Liliana, but they aren’t really necessary.  Learn what your opponent does, and prevent them from being happy.