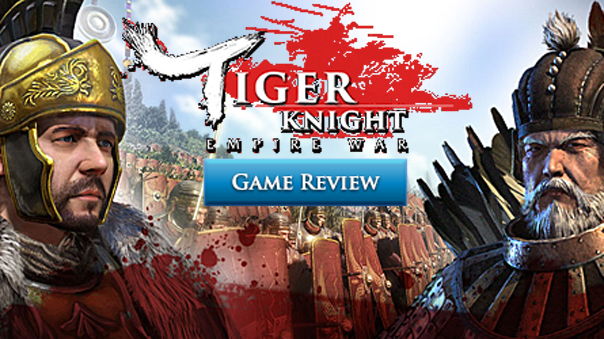 Tiger Knight: Empire War is a confusing game. A fun game, to be sure. But a confusing game, none-the-less. The reason is simple: It reaches into so many different genres. F2P Asian Grinder, World of Tanks experience/research and upgrade system, fighting tons of easy-to-kill minions like in the Dynasty Warrior games, plus a sprinkling of features from RTS games such as the Total War Franchise. This has given it some clear strengths and weaknesses that a lot of other games don’t have. In this Early Review, I’ll go over what I enjoyed about the game and what had me perturbed.

There is a decent customization system for when you initially create your character. Plenty of options can be found in the character creator, but I imagine that most won’t make full use of them. After character creation, customization begins to resemble World of Tanks or War Thunder. You can choose a faction, upgrade the various ‘troops’ from that faction, equipping them with gear upgrades. It’s very much a copy of the ‘World of’ games, but it’s done in a way that makes it interesting, especially considering the setting. At least early on, you can only take one unit into battle, similar to choosing a tank. However, once in battle you control your own character and can give orders to the troops. 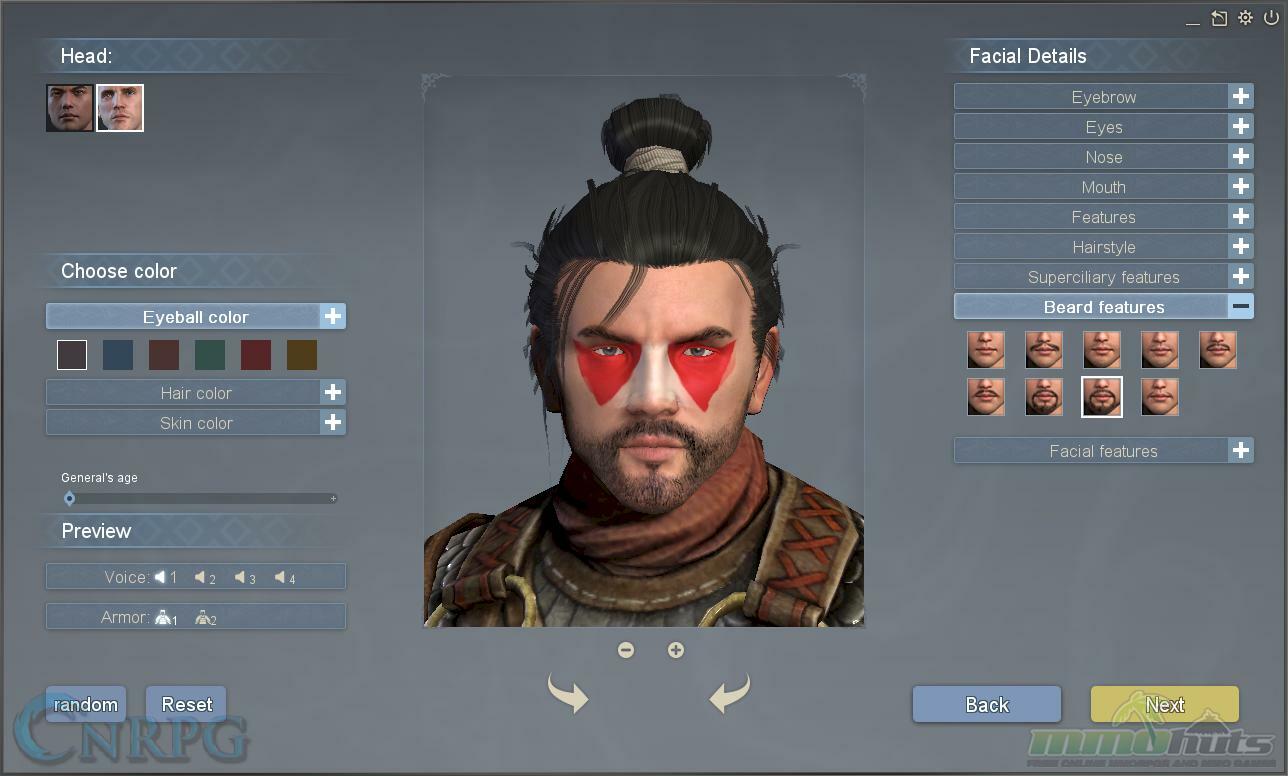 The upgrade system is quite rewarding. I loved upgrading to higher tier units and decking them out in the highest quality gear available to them. The cool thing about the game, though, is that gear upgrades that you purchase for your troops can also be applied to your main character. Get a slick weapon for your troops? Try it out on your main character. Like that armor your troops are in? You can wear it, too. Using a combination of research points – both specific to a certain unit and universal – and an in-game currency, you can unlock a ton of stuff. 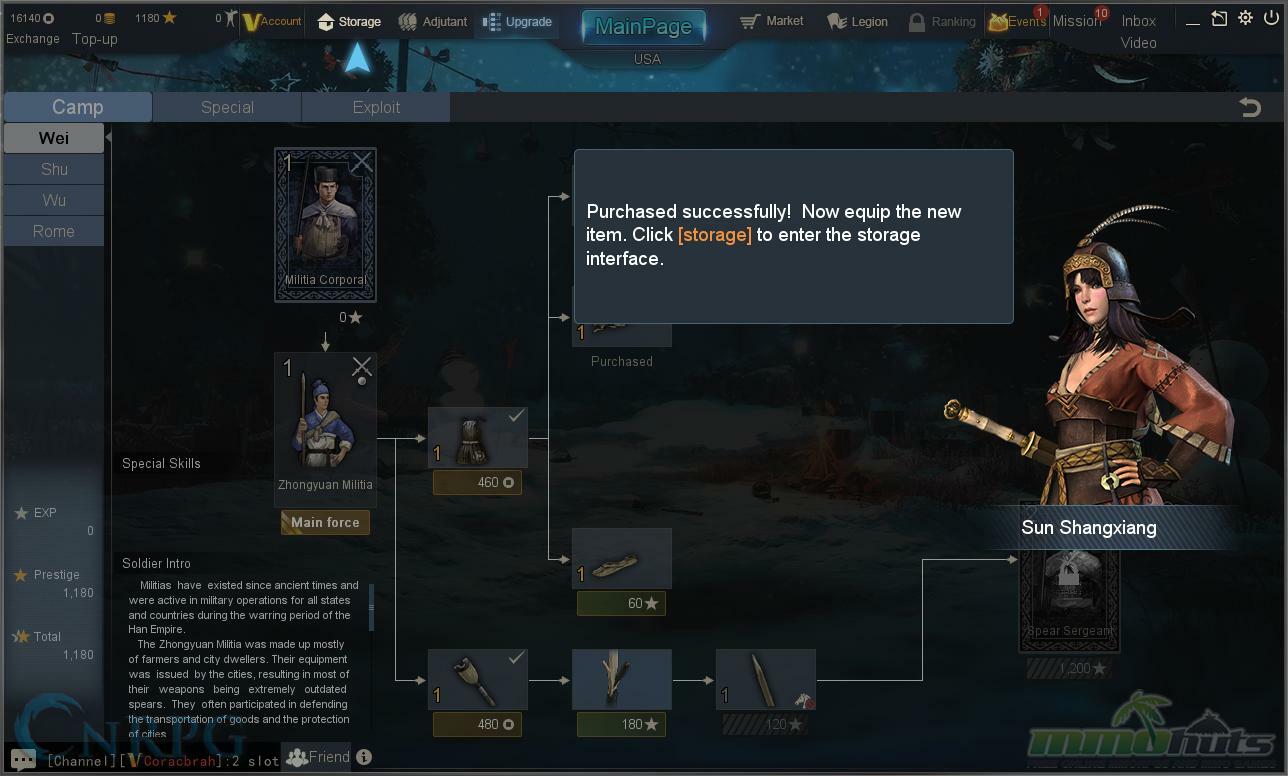 After unlocking a unit, you can further customize it by unlocking and purchasing equipment for it. Similar to the system used in World of Tanks.

The graphics in Tiger Knight: Empire War are… alright. They’re not bad, but they’re not amazing, either. There were times that I felt impressed with the looks of the game, but there were also times when I was disappointed. Most of the disappointment came with how certain elements of certain maps came together. Honestly, it’s the same issues I have with a lot of other games, but a lot of other games have areas that more than make up for them. Tiger Knight doesn’t. 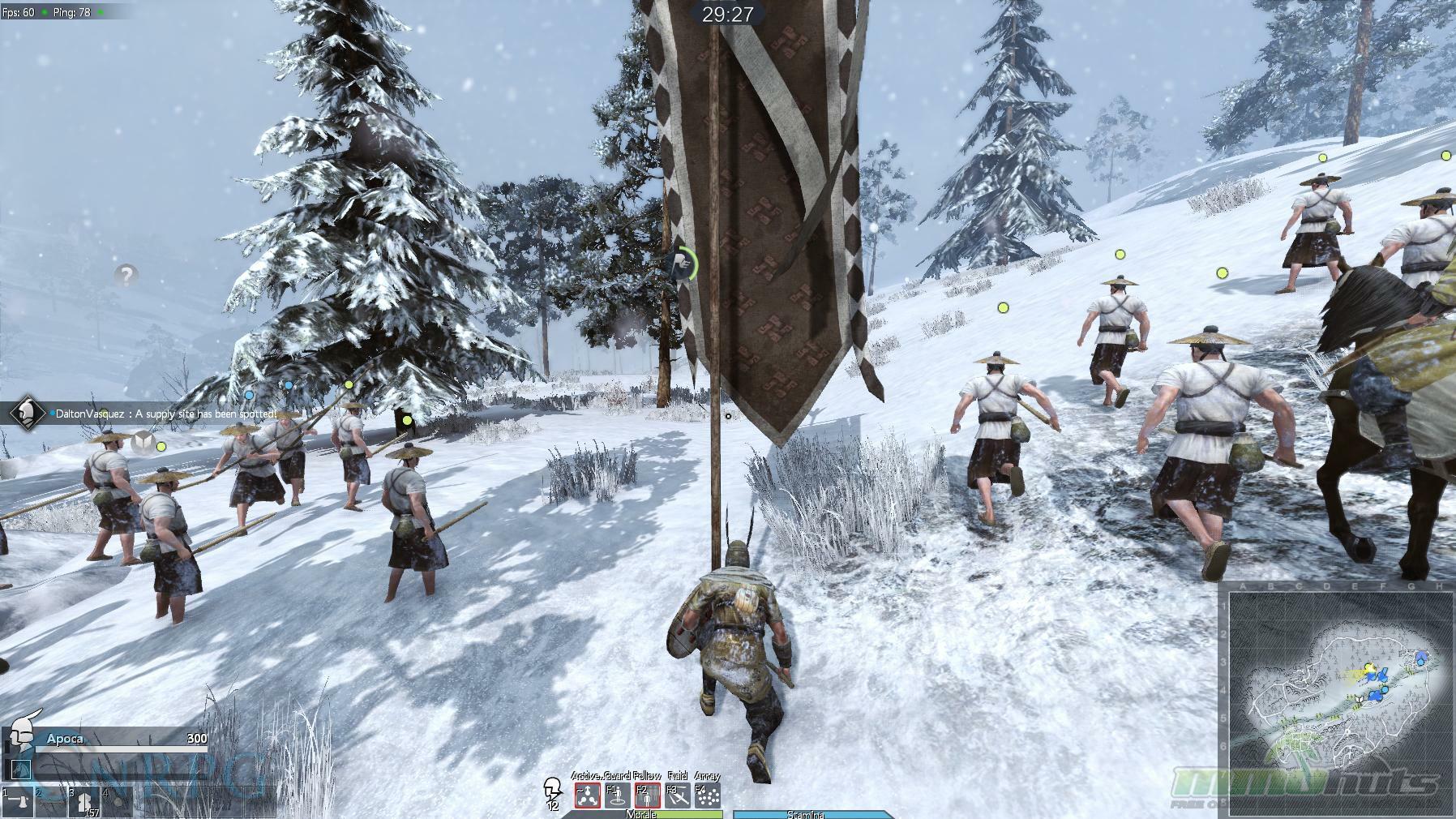 I tended to play the game in a smaller resolution in Window mode, but it still looked good.

The UI for the game is fine, if confusing. Perhaps the confusing nature will improve over time, as the game’s translations improve and the tutorial is a bit better. In general, though, the UI is sleek enough to give you all the information you need without being obtrusive. The negative side-effect of that, though, is that it can be hard to find certain things you need to pay attention to. Like how to change formations, or even keeping an eye on your HP. 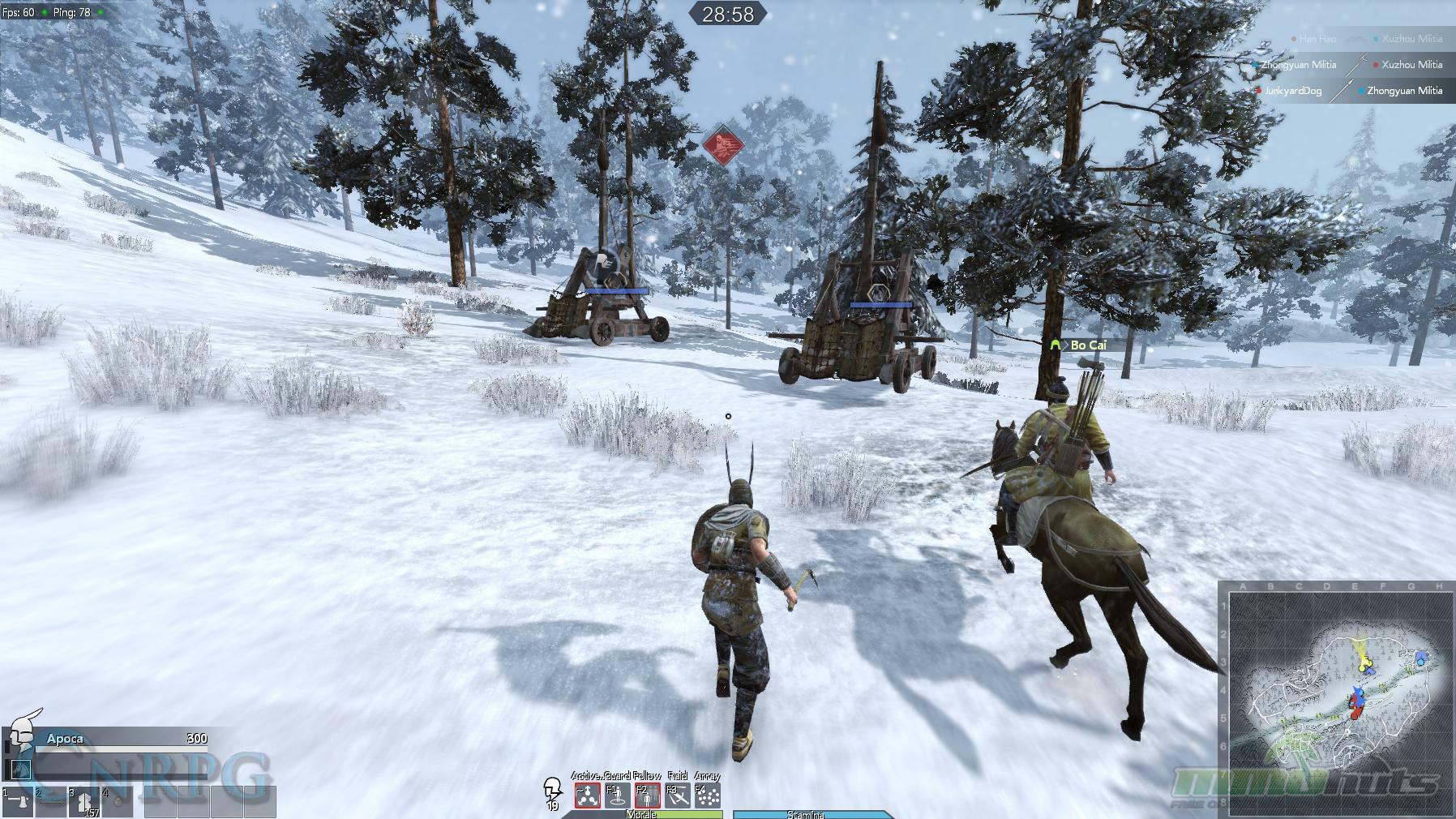 The controls are alright, for the most part. The game feels like it should be played with a gamepad, which makes sense. However, I never tried it so I have no idea if the game even supports gamepads. Getting the game to execute the swings you want can be difficult at first, for which they’ve introduced a training system that gives you great rewards to help you out. Other than that, everything in the game is responsive and quite intuitive.

The community isn’t as great as it could be. I’ve never had an issue finding a match, but on the public channels it’s quite difficult to find someone to help you with a question. I’ve also yet to have anyone communicate during a match. Most of the global/public chat consist of higher tier players advertising high-tier games. There is a Steam forum for the game, but it’s mostly filled with cries for help with various issues. The developers do seem to have at least some presence on it, however, which is great.

Like I’ve said, the game has elements from a bunch of different genres. It feels like the developers took a look at a lot of popular games and cherry picked the best features from them. The huge numbers of units that you can easily tear through in Dynasty Warrior, the formations and unit types of the Total War franchise, and progression system from the ‘World of’ games. For the most part, this worked out. The game is fun. However, it does have some short-falls that I’ll get into soon. 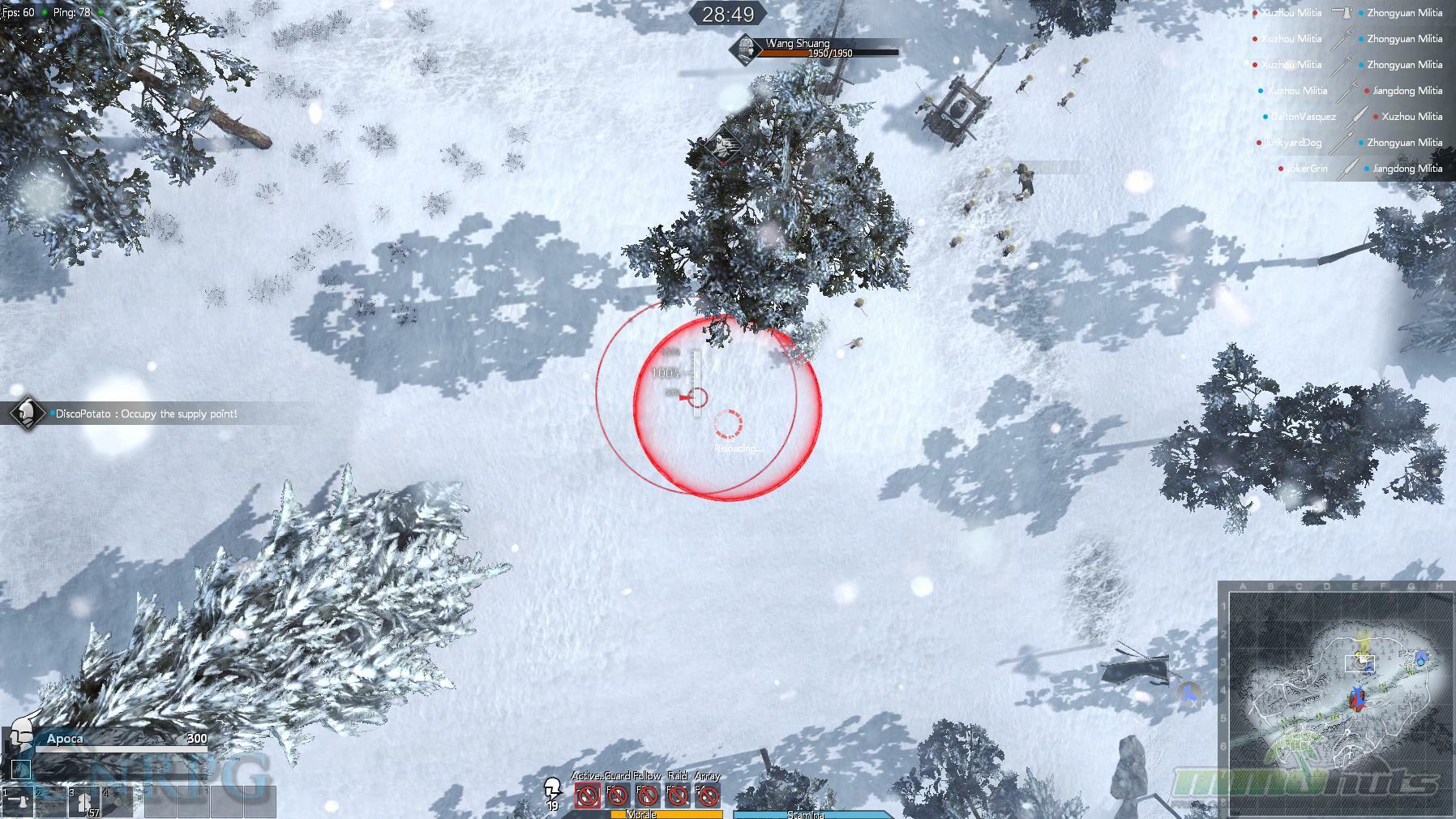 Most maps have siege weaponry sprinkled around.

Looking at the screenshots and gameplay videos before I actually tried the game, I had visions of epic battles with hundreds of units. And I wasn’t disappointed when I hopped in the game. However, I feel like there could be more RTS features. Right now, control over your units is fairly limited and they’re essentially useless. To be fair, that’s at the lower tiers. The game could be quite different at higher tiers, but from what I’ve experienced from the progression so far, I doubt that. 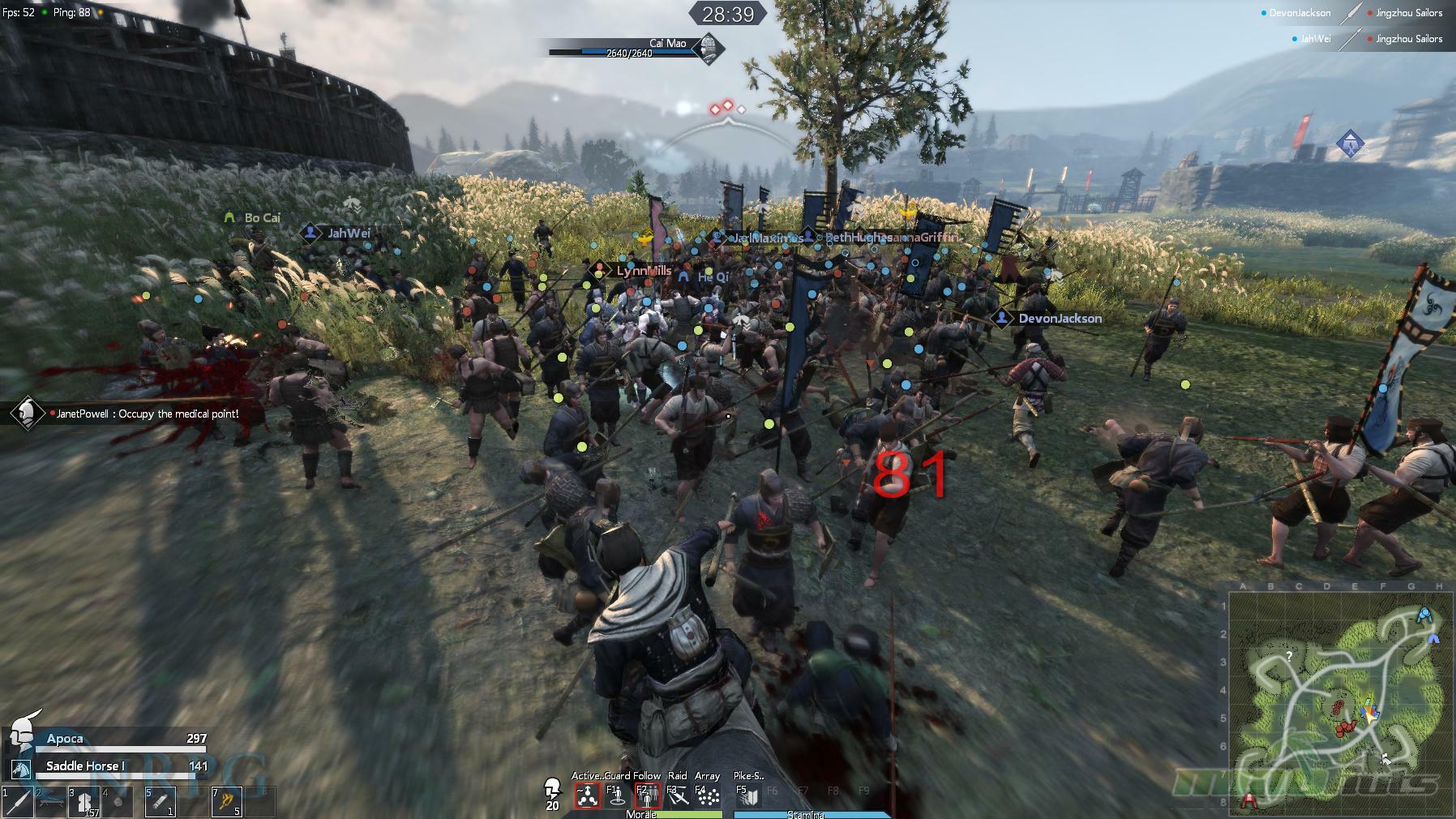 I really enjoyed the feel of combat.

Combat is quite enjoyable, using directional attacks and blocking. Somewhat similar to Mount & Blade, actually. There is nothing more fun than slicing your way through a unit of infantry, chopping them down until you get to their commander/the opposing player. But that’s just my opinion as someone who enjoys PVP. If, however, you are more focused on PVE, there are truly massive PVE modes you can participate in. 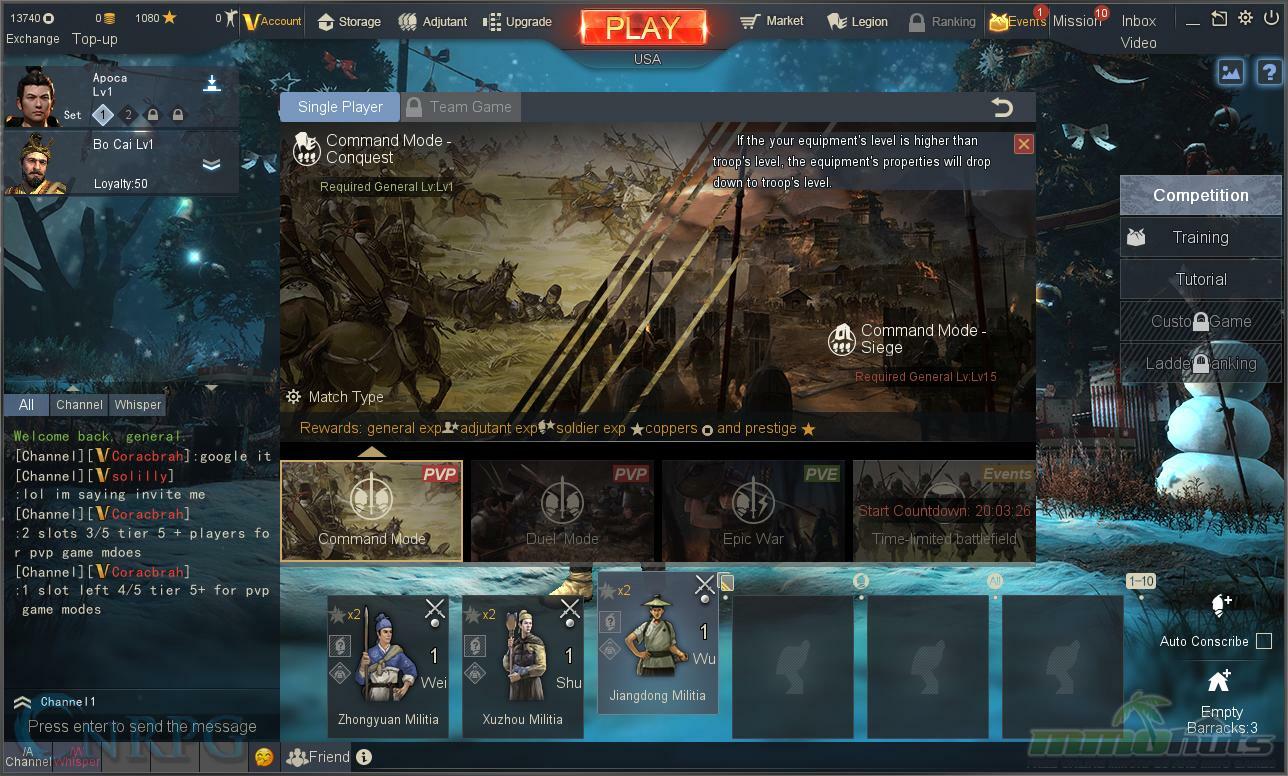 When I originally started playing, I thought I would be able to bring in tons of units to form an army. The reality is a lot…less than that. You can bring in a single unit, whose numbers are limited. That’s not too bad, when you consider that most matches will have at least three people per side. So the battles are epic and fun, but not nearly as much as I thought they would be. Matches, at least the PVP matches, are also quite short in most cases. As you get higher in tier, things tend to stretch a bit, but they’re still relatively short. 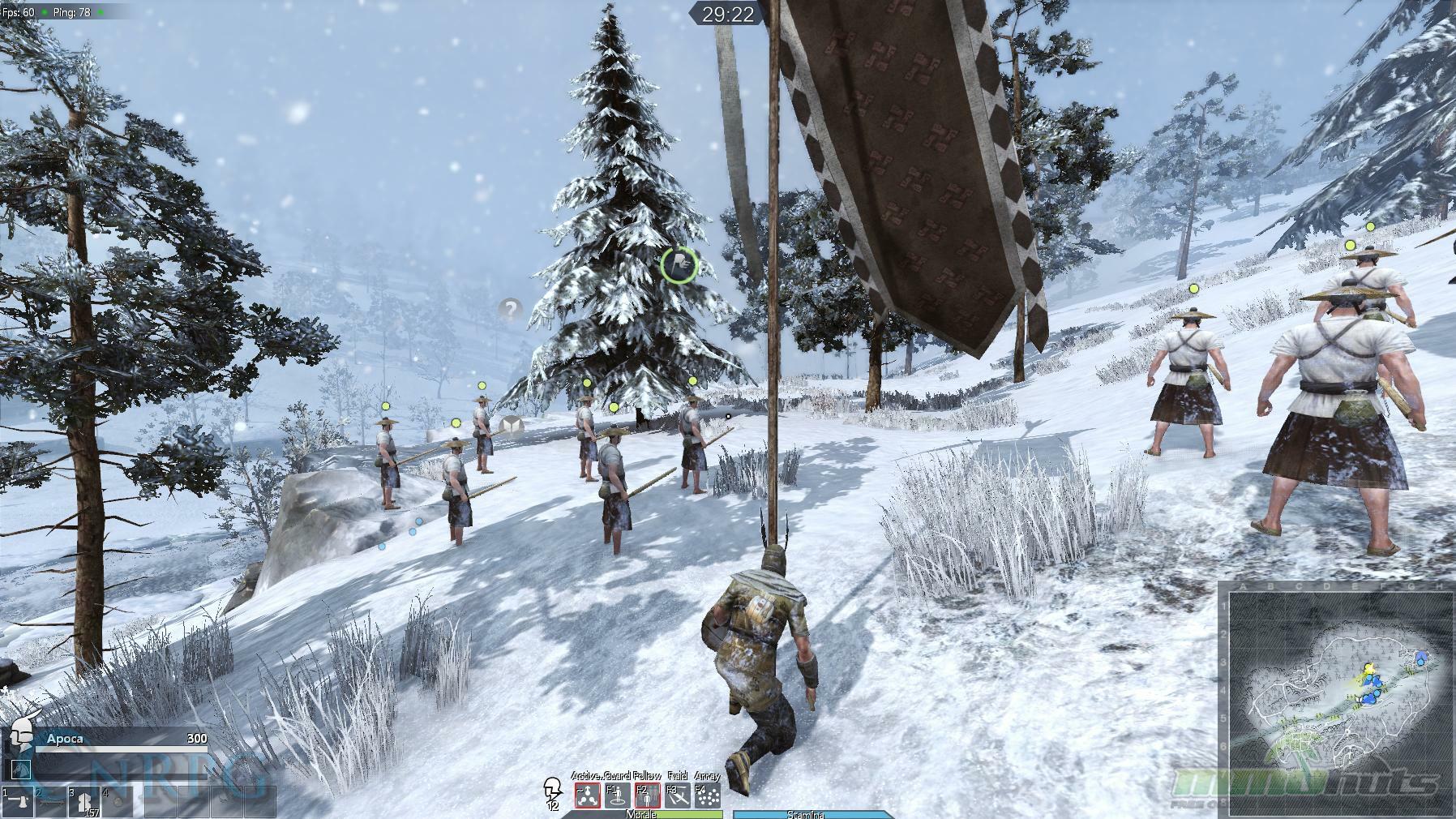 These capture points help define 'lanes,' especially when combined with the siege weaponry.

The regular PVP modes feel similar to a typical three-lane MOBA. Unlike a typical MOBA, however, there are no strictly defined lanes. However, there are three capture objectives on each map that help split the battle into three parts. You can choose to split the players up to focus on certain objectives, or have everyone push the same ‘lane.’ The same strategies from a game like Smite can (and often do) apply in Tiger Knight: Empire War.

Tiger Knight: Empire War is a game with a lot of promise. There’s a lot of neat features, but it’s still rough around the edges. If you’ve ever enjoyed the Dynasty Warrior games, you will probably enjoy this title. If you want a game similar to the Total War series… this isn’t it. It’s a mix between RTS, MOBA, third-person slaughter-simulator, and borrows features from a tank game. This is the type of game that will either give you some enjoyment for a few hours, or turn out to be the game you’ve been waiting your whole life to find. Either way, it’s free and you would probably benefit from giving it a try.

Features: 3/5 – Fun features, but by trying to be a jack-of-all-trades, most come out bland.

Graphics: 4/5 – The game looks good, but could use some polish.

Community: 3/5 – I haven’t been told to kill myself in a match yet. But the silence is killing me…