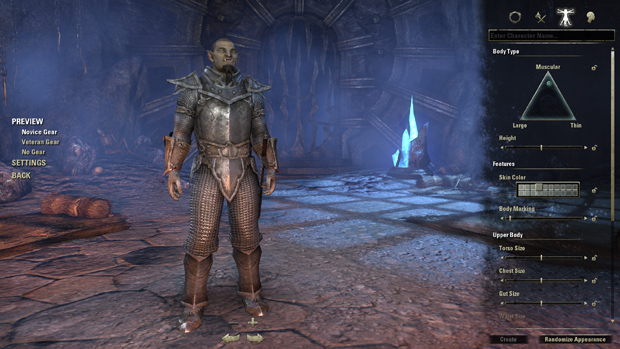 Elder Scrolls Online is ZeniMax’s attempt to create an MMORPG set within the beloved Elder Scrolls universe. The game shares the same rich history and deep lore as Morrowind, Oblivion, and Skyrim, all popular games that share the Elder Scrolls setting. If you’re a fan, you will want to give this game a try so that you can finally adventure with your friends while participating in the interesting storylines, quests, crafting, and adventures that make Elder Scrolls so special.

Part of what makes Elder Scrolls so amazing is how much customization you are given. You get to choose from an impressive list of races, have full customization of the looks of your character, and there is a huge selection of skills to train yourself in. Elder Scrolls Online lives up to its name in the customization department. At first, you will feel like the class system introduced in the game is a bit restricting, and it kind of is when compared with what we’re used to from other ES games – even Skyrim. But, in all honesty, the selection of skills you can raise is nothing to scoff at.

When you choose your class, of which there is currently a relatively small selection (in my opinion), you are then given three possible trees you can train in. For example, for sorcerer you can train in Dark Magic, Daedric Summoning, and Storm Calling. Each is a different face of the offensive caster. And then for even further customization you are able to train in ANY of the weapons, which give you access to new abilities. From there you can join different guilds (such as the Mage, Fighters, the Undaunted, etc…) to gain even more access to other abilities. New trees with new abilities will open up pretty frequently in the early levels. And, for those Twilight fans, you can even become a vampire or werewolf, just like in other Elder Scrolls games, which gives you even more customization for your character. Then there’s Morphing, which gives your abilities extra effects. 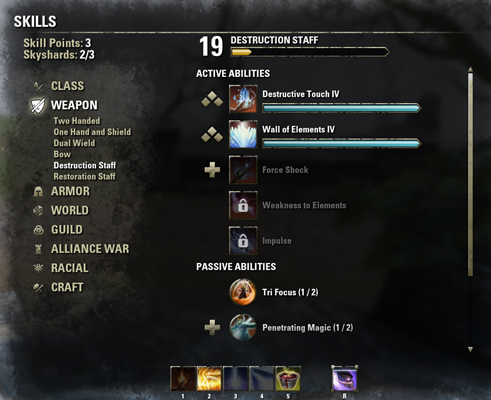 Race selection is important for two reasons. First, each race has its own distinct look and lore. So you’ll want to choose something that you’ll actually enjoy. Second, there are the racial abilities and stats. High Elves are great at destructive magic, for example. Each race has something that it is a bit better at compared to other races. There are a few racial abilities from other Elder Scrolls games that don’t come into play in ESO, unfortunately. For example, the Khajiit ability to see in the dark isn’t really necessary due to night time not being all that dark.

The game looks amazing. It’s as simple as that. The game is full of the stunning vistas and ruins we’ve come to love in Elder Scrolls. You can visit towns full of life, with their own unique history, lore and architecture. You can see forests with massive trees, ancient ruins with glowing runes, or even floating rocks. There are swamps, valleys, mountains, snow, everything you could want because this game encompasses all of the lands from previous Elder Scrolls games, and some that were only ever mentioned. If you’re like me, you’ll find yourself exploring often (which is something you are rewarded for in ESO). 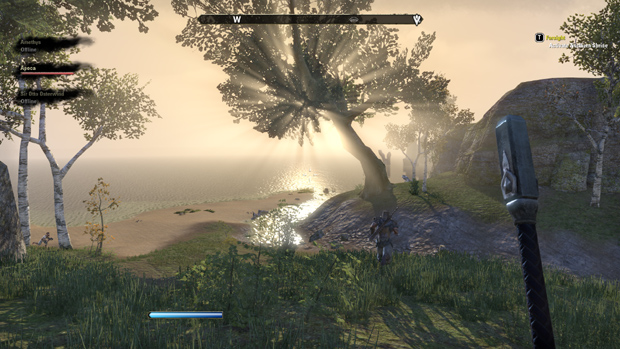 The UI is very sleek, and elements of it will disappear or appear depending on need (such as the health bar, mana bar, ability bar, etc…). This helps a bit with immersion, but a lot of people seem to prefer using add-ons to change the look/functionality of the UI. Personally, I do not like the health/mana/stamina bars very much – they feel small and hard to pay attention too in the heat of combat, compared to what I’ve seen in other MMOs. But, with the availability of add-on support, I suppose you can change the UI however you like and that makes the problem null.

The controls in Elder Scrolls Online are fairly straightforward. Both first and third-person are available, and you can freely switch between the two using the scroll button on your mouse. At least that’s the theory in a lag free environment, which was unfortunately non-existent this past opening weekend (but I think the lag will get better over time as the population stabilizes). To be clear, I mean server lag – which I will get more into later. When things are working smoothly, the controls are very responsive and the combat can be fun. Using the dodge and block functions is vital to combat, and they both work very well.

As you might have expected with the name, Elder Scrolls Online already has a rather huge player-base. And the great thing is, a lot of the people playing have been playing Elder Scrolls games for years, so it’s quite possible to have deep and insightful lore discussion, or just chat about game mechanics, in the /zone chat. That’s more than a bit refreshing compared to the trolling and hate that you usually get from an MMO community. Not to say ESO does not have its fair share of trolling and hate, that is.

In general, Elder Scrolls Online does well while attempting to emulate the usual gameplay elements found in an Elder Scrolls game. There are a few key things that semi-ruin the experience for me, but the other features that are done extremely well sort of make up for it. The most noticeable elements true fans will find themselves missing are the lack of thieving features or land/home ownership. But, as the game is a big title, it’s very possible that these features may be introduced at a later date. All-in-all, though, ESO seems to be shaping into a very good MMORPG, if nothing else. And let me be clear, the game is FULL of content. I’ve put 40+ hours into the game on just one character and I’ve only just reached level fifteen. Of course, others have reached much higher levels in the first few days of the release, but you can definitely take your time and have something to do constantly. 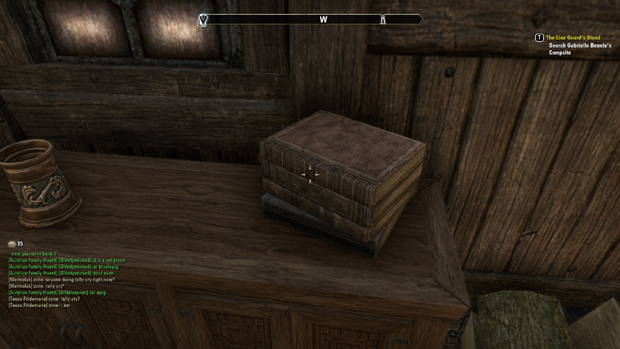 As you can see, a lot of objects are just props you can’t interact with, which is unlike other Elder Scrolls games.

Just like other Elder Scrolls games, ESO puts a huge emphasis on questing. True to its name, the questing in this game puts the questing in almost every other MMO to shame. Almost every quest you do will be part of some story-line you can’t help but be immersed in. The voice acting, the writing, the choices – they all add up to the signature Elder Scrolls story-telling experience that we’ve all come to love. And ESO has it all. 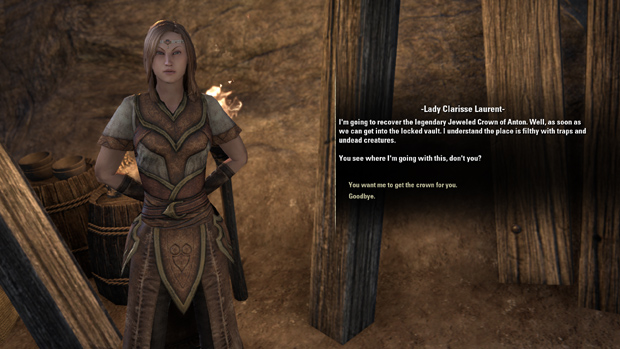 While I have yet to see a major impact of one of my choices during a quest, the choices I make do have an effect on how the story-arc ends. You might choose to give a greedy Lady a cursed crown in order to trap her spirit and teach her a lesson, only to find out that she has her innocent servant touch it before she does and instead traps his soul. Or you could just give her the true crown and keep the current trapped soul in his prison so that no innocents would be sacrificed to free him. Almost every other quest you do will have you make some choice or another that will affect the outcome. 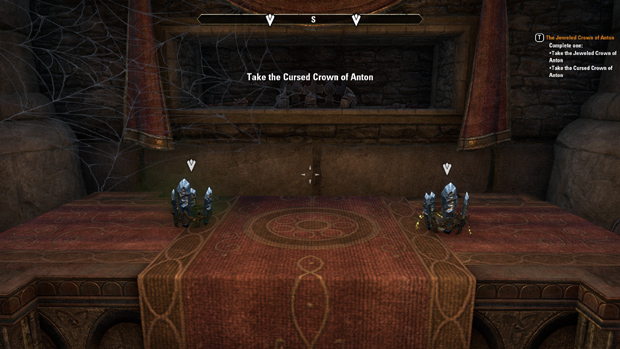 Another great thing about the questing is it actually impacts the world around you. Well, to be clear, it impacts your own personal vision of the world. Due to the phasing technology that ESO employs, the world you are seeing can be quite different than that of your friends. Sometimes this is as simple as making a previously hostile zone free of enemies (or vice versa), or it might make the Wyr Sisters show up to help a struggling town with their wounded, after you’ve saved their Wyrd tree. One drawback to this is that, even while in a group, you may suddenly find your comrades disappearing while adventuring. They will enter a phase of the same zone that is completely different, so while they might be standing in front of you, you won’t be able to see or help each other in combat until you leave the area and rejoin in the same phase again. Needless to say, this is very confusing and frustrating at times.

Continue onto part 2 of our Elder Scrolls Online launch review.